2015 was a milestone year for the environment; looking ahead, the world has got its work cut out to achieve its sustainability goals. Here's what Singapore can do in 2016.

Last week, Singapore’s Ministry of National Development launched a new month-long series of public engagement sessions titled “A Cleaner, Greener and Smarter Home”. As part of the symposium, I visited the ongoing Future of Us exhibition at Gardens by the Bay - billed as the grand finale to Singapore’s SG50 Golden Jubilee celebrations.

At its entrance stands a large display of the front page of a newspaper titled “The Future Express” from December 2030. Its headlines reveal that by then, all buildings in the heartland have edible gardens, and drones are being used by Singaporeans to “chope” (local slang for ‘reserving’) seats.

Go further, and the exhibition immerses you in a sensory experience featuring 3D screens and large-scale models in four massive domes on what daily living in the city-state might be like.

In 2030, sky farming is available everywhere for people to grow anything they desire, healthcare professionals can be “summoned” by the elderly with the touch of a button via smart devices, and homes are powered by kinetic energy that converts daily movements into electricity. Energy from the sun is also stored in battery banks at self-sufficient buildings that use a smart system to distribute energy efficiently.

According to the organisers, these futuristic scenes of Singapore were based on national masterplans and ideas mined from some 15,000 suggestions collected during the Our Singapore Conversation, an exercise in participative citizenship which ended in 2013. I found the visions of Singapore I saw at the exhibition uplifting.

The experience also triggered - at the start of this new year - some introspection and reflection on the past year and what lies ahead.

I would say last year was a milestone year for the planet.

It was the hottest year on record, and a group of leading scientists, in a new report published last week by the journal Science, now say that humanity has left such an indelible imprint on earth that it justifies naming a new geological epoch - the Anthropocene - after mankind.

Thankfully, the year also offered bursts of hope: sustainable development entered the mainstream global discourse, boosted by the adoption of the 17 new Sustainable Development Goals by the United Nations. These goals set the development agenda for the world until 2030 and include ending poverty and hunger, improving health and education, and protecting oceans and forests, among other noble pursuits.

Last month - after two decades of tough negotiations - nations also adopted the Paris Agreement, a historic global treaty to tackle climate change that analysts say will finally usher in the renewables era and the end of the fossil fuel age.

In the coming years, the world certainly has its work cut out to achieve these goals.

Domestically, Singapore has outlined its own targets on everything from energy efficiency to Internet connectivity and cycling lanes in masterplans such as the 2015 Sustainable Singapore Blueprint, the Smart Nation vision, and its national commitment to the Paris Agreement.

These long-term targets are not just about meeting international commitments, but also improving the lives of citizens. In other words: providing cleaner, greener, smarter homes.

Here’s what I wish can and will happen this year to usher in that sustainable future:

I wish for bolder policymaking in areas such as transportation, waste management and energy. The vision of a “car-lite” Singapore set out in the 2015 Sustainable Singapore Blueprint will require a paradigm shift to focus on people - rather than cars - in urban planning.

Apart from ramping up public transport, plans for car-free zones, more pedestrian walkways and cycling lanes should be speeded up. Alternative forms of transport to the traditional car, such as electric cars, scooters or unicycles, should also be encouraged and integrated safely into the transport systems.

As a small country, Singapore has a disproportionately high waste footprint and it’s high time it addresses this. That will require a fundamental rethink about waste-management systems.

Singapore could do more to embrace emerging concepts such as the circular economy. This favours keeping resources in use in the economy for as long as possible, over the outdated, linear “take, make, waste” model of growth as driven by manufacturing and consumption.

Singapore also lacks regulations on e-waste, which is unacceptable, given the national addiction to electronics and gadgets.

In the light of the Paris Agreement, cleaner forms of energy such as solar and waste-to-energy should be encouraged. Regulations need to be updated so as to enable home owners to easily install solar panels if they wish, and for companies to widely adopt them. There needs to be stronger leadership in areas that involve new technology, such as building infrastructure for electric vehicles and home energy-management systems that allow home owners to better control their usage. 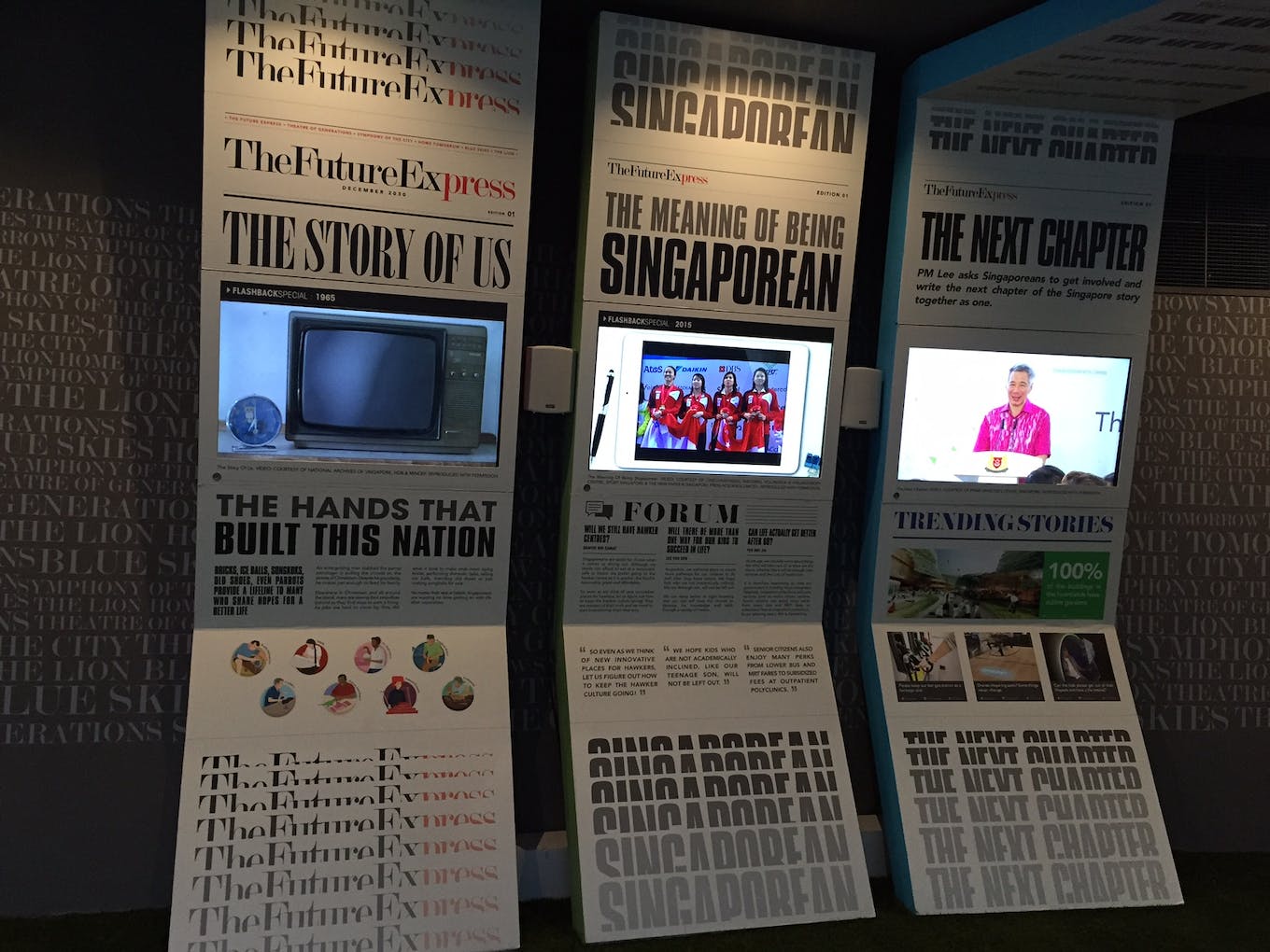 At the entrance of Singapore’s Future of Us exhibition stands a large display of the front page of a newspaper titled “The Future Express” from December 2030 whose headlines reveal what Singapore is like in 2030. Image: Eco-Business

I wish for businesses here to exercise greater ethical leadership. They face increased public scrutiny and less tolerance for dishonesty and self-interested pursuit of short-term profits at the expense of society and the environment.

Businesses can help reduce waste generated by considering alternative business models that shift the focus from selling products to selling services. They can tap the growing sharing economy, which promotes collaborative consumption using peer-to-peer networks, where access to goods is favoured over ownership, to minimise inefficiencies and idle capacity.

I wish for the continued rise of civil society and advocacy here. The growing army of activists, who are increasingly conscious and vocal about social and environmental issues, will play a key role in giving feedback to and holding government, institutions and businesses to account.

I hope for Singapore to be clean, but not sterile; for parents to teach their children to love and respect nature, and embrace the rich biodiversity this city in a garden has to offer.

Lastly, I hope for Singapore to grow a more gracious culture, and for sustainable consumption to become part of the national psyche, so that more will aspire to be self-sufficient, not overconsume and learn to value experiences and relationships over material goods.

I wrote a few of these down at the last stop of the Future of Us exhibition, where visitors are invited to write about their hopes and dreams on a touchscreen. Swiping it upwards then sends it “floating” up into a constellation of stars - or “wishes” - projected on the ceiling of the dome.

Viewing this impressive galaxy buoyed me with a sense of infinite possibility as Singapore enters not only a new year, but a new post-SG50 era. But turning visions into reality is hard work. That work starts now.