As key stakeholders in higher education, students should have greater say in decision-making

In Asian universities, students often have little say about what happens on campus. As student divestment groups in the region gain momentum, it’s time for universities to listen to what their students have to say about issues that will affect their future.

In 2018, National Taiwan University’s presidential elections for the first time allowed students to inquire about the policies of each presidential candidate, resulting not only in the election of a president that the majority of students were comfortable with, but a win for the student divestment movement.

Although involving students in the elections was an anomaly that emerged from prior controversies within the university, doing so raises the question of whether students should have a greater say in decision-making and, in the process, be able to hold their leaders accountable.

These questions are especially pertinent for an issue as urgent as climate change, the effects of which weigh heavy on the minds of many young people. The fear of irreversible environmental damage has detrimentally affected youths’ mental health, resulting in growing levels of eco-anxiety or eco-grief.

Students should have a say in issues of intergenerational equity, like climate change, says Herbert Chang, climate ambassador and director of campus at 350 Taiwan, a climate campaign group. “We all know that the climate crisis inflicts different levels of damage and loss on different generations. Young people will suffer from the impacts of climate change more than the generations before them, but will have less time to deal with it,” he said.

In universities, we learn about some of the world’s most challenging problems but we also learn about the most promising solutions. This is why we feel very motivated to do something about it, especially for an issue like climate change.

Across many universities in Asia and beyond, students have begun to take matters into their own hands and student divestment groups have sprouted up to urge their education institutions to stop investing in fossil fuel companies.

“In universities, we learn about some of the world’s most challenging problems but we also learn about the most promising solutions. This is why we feel very motivated to do something about it, especially for an issue like climate change. We can’t wait until we are 40 years old or in a position of power to do it. By that time, it’ll be too late,” said Ning Yiran, a member of Singapore’s inter-university divestment movement, Students for a Fossil Free Future (S4F).

To date, over 224 educational institutions globally have successfully divested according to a divestment database by environmental campaign groups Stand.earth and 350.org. But out of the many universities, only one of them is based in Asia—National Taiwan University.

Rachel Cheang, another member of S4F, told Eco-Business that while universities have started to engage students in dialogues or consultations, these engagements are not done meaningfully, and more often than not, “students don’t have any effect on the outcomes”.

Although universities are holding more town halls, decisions seem to be made before engaging students, she said. A good example of this is the National University of Singapore’s (NUS) series of merger decisions that were announced between August and September last year.

Students were caught unaware by these decisions, as they were first announced via emails and later “discussed” through virtual townhalls and engagements sessions, although the decisions had already been made. As a result, an inter-faculty collective of NUS students launched the #NoMoreTopDown petition, claiming that these decisions are “ineffective, lacking in transparency, and undermine the welfare of the affected communities”. At the time of writing, the petition has garnered 14,785 signatories.

“Universities also tend to inflate their commitments to future generations but fail to change any of the power structures that allow students to be a significant part of decision-making,” she added. For example, in response to the divestment campaign, a spokesperson from NUS pointed to its statement on sustainability and said that it is engaging a range of stakeholders to find solutions and raise awareness on sustainability issues, although students themselves have yet to be involved in this process. 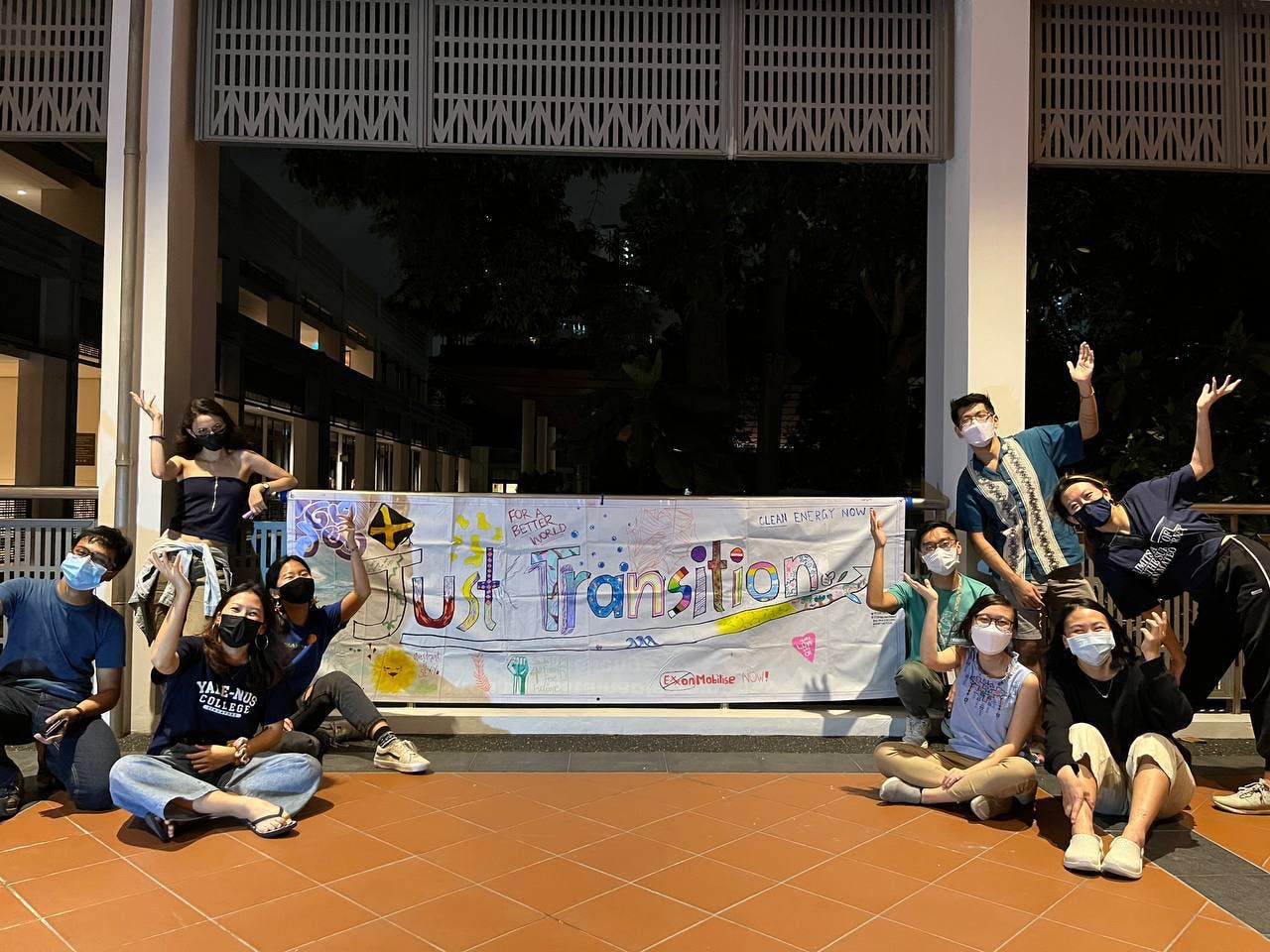 Part of S4F’s movement is to change the status quo such that their university administrators might be able to imagine making important decisions in consultation or in collaboration with other stakeholders, such as students, staff or faculty, said Ning.

“We want to establish working relationships with university leaders and create space for students to influence decisions. We believe that better decisions can be made when students’ perspectives are included,” she added.

Are activists and brokers mutually exclusive?

At a recent event on how young people can drive climate action, David Chua, chief executive of National Youth Council, a co-ordinating body for youth affairs in Singapore, called on youths to be “brokers” rather than activists. But can youths be both?

“In Singapore, when an individual or group of people start to critique the way the current system works, it’s seen as a threat or disruption to the peace. But this report and campaign is born out of so much care, of wanting our universities to step up, of a huge belief that Singapore is capable of doing better,” said Cheang.

“We do hope that university administrators don’t see us as just another activist group trying to make a lot of noise, but partners who have something to bring to the table,” she added.

Agreeing, Ning emphasised that S4F acknowledges that as students, they have limited expertise on the subject matter, and are open to collaboration with university leaders.

“I hope that this campaign shows them that we’ve done our research, and we do want to raise awareness about the fossil-free movement and divestment, but more than that, we’re putting effort into creating dialogue and giving concrete suggestions,” Ning added.

The 68-paged report by S4F entitled Fossil Fuelled Universities lists a timeline of recommendations that take into account the challenges that university leaders might face in trying to divest.

When student activism has worked

The sometimes awkward relationship between student organisations and university leaders in Asia may take time to change, but we can learn from case studies of where students have won a bigger voice, and realise that greater collaboration leads to better decisions.

The success of National Taiwan University’s student divestment tells a story of a group of students who understood the importance of collaboration and made use of key opportunities to push their agenda forward.

Realising the limitations of student clubs within the university, four sustainability-related groups came together to establish a sustainability department within the Student Association—the only student representative group that had direct communications with the school administration.

With a consolidated voice, they leveraged the university’s presidential elections to bring up divestment as a major concern of students.

During an event held by NTU Student Association (NTUSA), students from the Sustainability Department posed the idea of divestment to the eight candidates. Of the two candidates that agreed to divest, Kuan Chung-ming eventually became president of the university, and went on to honour his promise to the students.

In his response, Kuan mentioned that divesting from fossil fuel companies and other carbon-intensive companies was the responsibility of National Taiwan University, as one of the most prestigious universities in the country, to fulfill its social responsibilities.

“It is important to understand the relationship between school officials and students, and how students can position themselves favourably. In other universities, there might be other occasions that could be big opportunities for student groups to lean in and see if they could put pressure on the school board to at least propose their stance,” said Joy Chang, member of NTU Student Association’s Sustainability Department.

According to Chang, NTU’s Office of Financial Affairs initially acknowledged that they had a limited understanding of sustainable investing, but were open to collaborating with the student group to educate themselves. Together, they organised lectures by 350 Taiwan and other environmental organisations to find out more about the best practices and arguments for divesting.

In 2021, NTU’s chief finance officer also promised to listen to students’ opinions before formulating the university’s responsible investment principles, and said he would continue to engage students on a yearly basis about future investment strategies. This was key to the success of the student divestment movement, Chang from 350 Taiwan shared.

Another model for greater student engagement is University of British Columbia (UBC). The university made the decision to divest in December 2019, and simultaneously announced the university’s Climate Emergency Declaration.

With the declaration, UBC conducted a year-long process of student engagement, and invited different stakeholders, including students, to be a part of the Climate Emergency Taskforce, a group that eventually shaped the final recommendations for the action plan to implement campus-wide climate commitments, one of which was divestment.

Currently, the university also funds a student-led Climate Hub, which has up to eight student positions and two full-time staff, and leads the engagement process. By the end of the year, there was a concrete action plan with clear goals, but more importantly, resources and funds were allocated to climate action, said Cheang.

“Concrete actions, rather than vague future commitments and public statements, are more tangible and impactful ways for students to feel like they have agency to tackle climate change,” she says.

Students may not have all the answers, but they are well-intentioned and willing to learn. If we want students to feel empowered in the fight against climate change, young people should be given more opportunities to influence our educational institutions. Universities can take the first step to open up communication channels and actively listen to what students have to say about decisions that affect their future.