McKinsey director Jonathan Woetzel has had a front row seat during China's economic boom for the past 22 years. Here, he tells Eco-Business why he is optimistic about the growth of sustainable infrastructure in the wider region.

Dr. Jonathan Woetzel has lived and worked in Shanghai since 1995, an era when foreigners were still a rare sight in the China business scene.

His roots to the Asian giant - his father was born there - and ability to speak Mandarin however has enabled him to build McKinsey & Company’s China office over the past two decades.

In that time, he has seen the shifting of the center of the world economy to Asia — one of the disruptive trends he covered in his book published in 2015,  “No Ordinary Disruption”, which discusses how world economies must prepare to adapt to them.

But even as Asia has enjoyed tremendous growth in recent years, the region has huge infrastructure needs, says the director of the McKinsey Global Institute — the consultancy’s business and economics research arm.

He points out that there are still over 400 million Asians living without electricity, 300 million without safe drinking water, and over 1.5 billion without basic sanitation.

Woetzel is also one of the chairpersons of the non-profit think tank, the Urban China Initiative, and the global leader of the McKinsey’s Cities Special Initiative, where he has regular interaction with urban authorities in over 40 geographies worldwide

In a recent interview with Eco-Business, held at the sidelines of the McKinsey Infrastructure Summit at Capella Hotel, the US-born management consultant speaks about China and the forces that will shape infrastructure growth in the wider region.

How do you think the Asean region is doing in terms of building the required infrastructure that it needs?

It’s a work in progress. I think the region is characterised by its differences more than its similarities in that you have everything from a world-class Singapore to a very emerging Laos. I don’t know if we can really speak of it as a region as much as a set of connected economies, and by that measure, integration is improving.

As far as the individual countries are concerned… Indonesia is probably the single biggest story for Asean in terms of the amount (of investment) that’s needed in early stages of urbanization. There’s a lot of investment that remains to be done, but the good news is that thanks to China, and to some extent rising savings rates, there’s an improvement compared to five or ten years ago. I would say that the outlook for infrastructure investment in the region of Asean will continue to be positive going forward.

Most of the opportunity here is less about providing more capital and more about using that capital more wisely.

Can you give specific examples of what you mean by using capital more wisely?

We think of it in three broad categories. The first is that the most efficient energy is the energy you do not use… So implementing energy efficiency, reuse technologies, and recycling… all of these are more evident in their absence than in their existence.

I mean the fact that this restaurant is chilled to 19 degrees temperature when nobody is actually in it, indicates that somebody has not been thinking here. 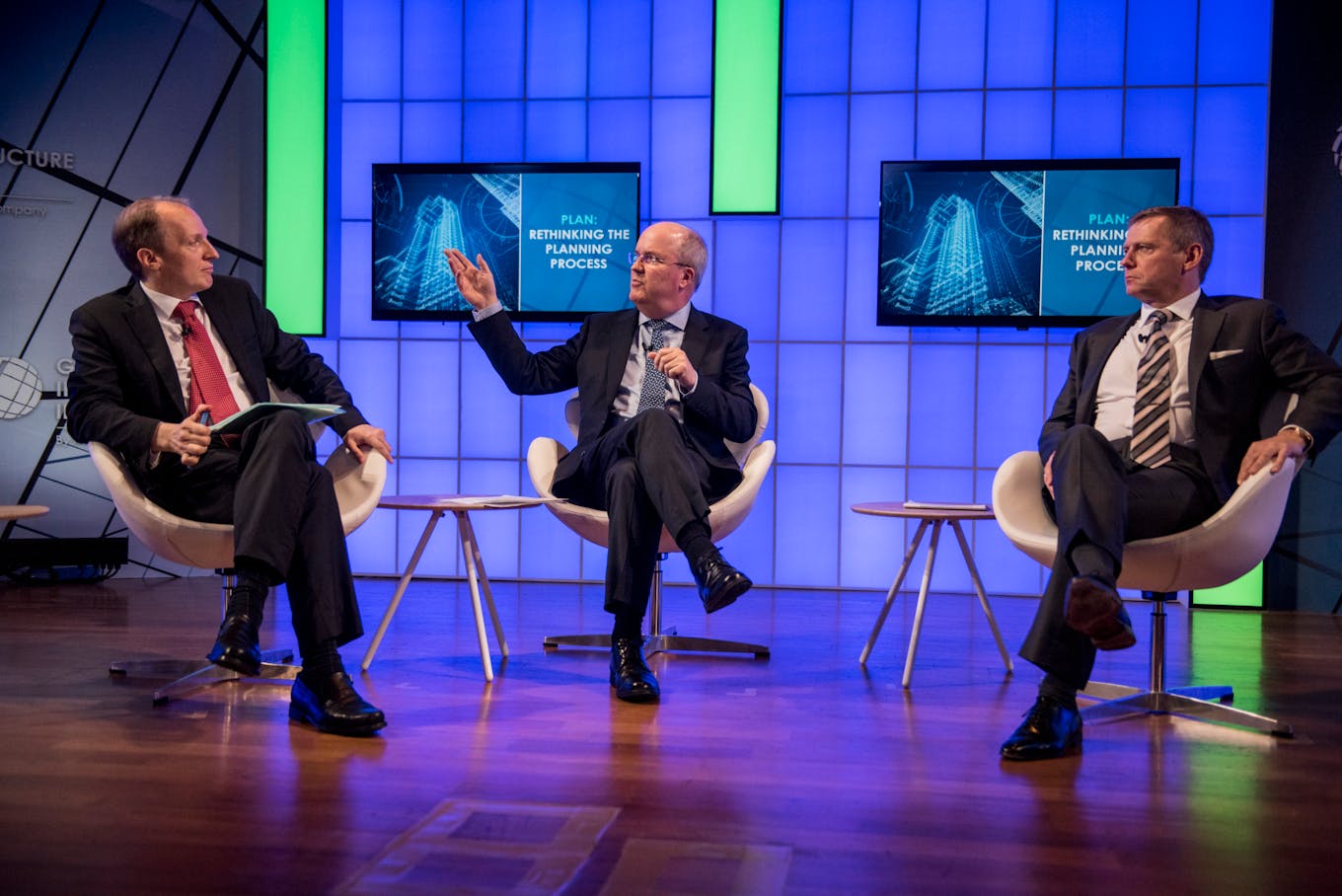 But once you have right-sized your demand and thought about that more effectively, then you can put the right projects together and design value in terms of the cost of developing the infrastructure. This is an area where China has excelled; It has taken an approach that builds at scale. I mean China’s introduced a generation of infrastructure which is 30 to 40 per cent less capital intensive than the equivalents from anywhere else and does a pretty good job.

The second big opportunity is thinking about the design of the project, ensuring it captures the scale benefits, and doing it in a creative and smart way.

And finally, there’s the third issue which is the management and delivery of infrastructure, which is both a question of competitive markets. The private sector should come up with the best way of running a trash management system, for example, so there’s a lot of opportunities to introduce more efficiency into the management of these systems.

In your role, you offer consultancy services across many infrastructure projects. How high do you think sustainability ranks in these projects?

So, sustainability is saying that this project or this piece of infrastructure will, on an integrated basis, achieve what we hope for it to do - that it will not need to be reinvested in.

The most efficient energy is the energy you do not use.

By this definition I would say, it’s very high, and that most people understand that they’re building a legacy, and that the consequences of misunderstanding environmental, social or economic impacts is going to create a problem for them. The real question is, do people fully appreciate the environmental externality?

I think a lot of awareness has been raised in the last five years especially, and with that, we now see a plethora of meetings and conventions and articles (on sustainable infrastructure), which is a good thing.

Are we setting enough standards for the infrastructure projects that we’re seeing across the region?

In economic terms, when a city or region develops economically from a thousand GDP per capita to ten thousand GDP per capita, generally speaking, things get better. Water treatment facilities get put in, more schools get built, hospitals hire doctors, the public health improves. It’s all good, and that’s a consequence of economic development.

But at a certain point, you get richer but things aren’t actually getting any better. That’s where the investments that we’re making need to be better-thought through.

They need to have a higher recognition of the externalities we spoke about. In the big pieces of infrastructure that are intended to last for 20 to 50 years, like an airport or a port, I think there is a pretty robust set of standards across the region. If things are not happening, it’s not for the lack of a standard, it’s because of the lack of the capability, which is a different problem.

What do you think is the biggest challenge here? Is it the lack of competence in certain countries?

I’m not sure it’s a lack of competence honestly. I would say that I’m more optimistic and so I feel like there is a positive dynamic here.

I think there are three critical aspects. First of all, there’s the conversation that it needs to be held, which is appropriate to the social context. In China you would debate it in sort of a general way but then decisions get made among a much smaller group of people. In places like Australia, it’s right out there in the public and everybody debates everything.

There needs to be a list and it has to be transparent, that we need to decide on the priorities when looking at any infrastructure investment.

And then the other parts of it are the use of technology. You need to do polling and diagnostics, so you can really pinpoint where the problem is. For example, what is the underlying cause of a pollution problem, or what is this traffic problem caused by? Is it driven by industrial estates, or is it being driven by other government policies (with unintended consequences)?

In Asia the issue of corruption is huge, but it’s not often discussed at forums because of government delegations and sensitivity issues. What is your take on this, is corruption still a main obstacle for infrastructure success?

There are many organisations such as Transparency International and others that rank the countries on levels of corruption. But in the economic sense, corruption is a tax. It makes things more expensive than they should be, and it also consumes the available capacity for project development. Fewer things get done and what gets done is more expensive and less effective than it would be otherwise.

I’m sitting in China, and you know, we’ve had an anti-corruption drive for the last three years, and that’s the new normal. I think there’s no question that governments are willing to acknowledge that they haven’t been perfect and that they need to step up their game.

You’ve been in China for a long time, and China is now leading on so many issues, from climate change, to renewables, to the Asian Infrastructure Investnment Bank (AIIB). Is China leading the way now?

Nobody does everything right. It’s impossible. There’s always something we can do better, but China is the new global infrastructure standard. It couldn’t be any other because it spends more money on infrastructure than the United States and Western Europe combined.

Secondly, what it builds is pretty good — it’s effective and robust and at scale. It’s like the Hong Chao hub in Shanghai. It’s an integrated airport, high speed rail, subway terminal, processes a million passengers a day — that’s the kind of scale you don’t find elsewhere.

Click here to read other Eco-Business stories on sustainable infrastructure.