A new exhibition by Eco-Business explores the link between melting ice sheets and communities in Asia. One of its defining images: The carcass of a reindeer that likely starved to death after getting its antlers entangled in a fishing net.

“We must be more civilised than to have death in order to start paying attention,” remarked Professor Kim Holmén in Arctic Awakening, a new documentary by Eco-Business that traces the impact of climate change in the northern polar region on Asia.

Holmén, a longtime Arctic resident and the international director of the Norwegian Polar Institute, has seen many changes there over the decades.

The most recent summer was the Arctic’s hottest on record and an unusually high number of reindeer were found dead from starvation in Svalbard, an archipelago where Holmén lives that lies halfway between mainland Norway and the North Pole.

One of the defining images in Arctic Awakening is the carcass of a reindeer that likely starved to death after its antlers got entangled in an abandoned fishing net.

The 21-minute documentary, produced and directed by Eco-Business founder and managing editor Jessica Cheam and director-producer Fraser Morton, premiered last Friday in conjunction with the opening of Eco-Business’ multimedia exhibition, Changing Course 2019: An exploration of our climate crisis, at the Marina Bay Sands’ ArtScience Museum in Singapore. 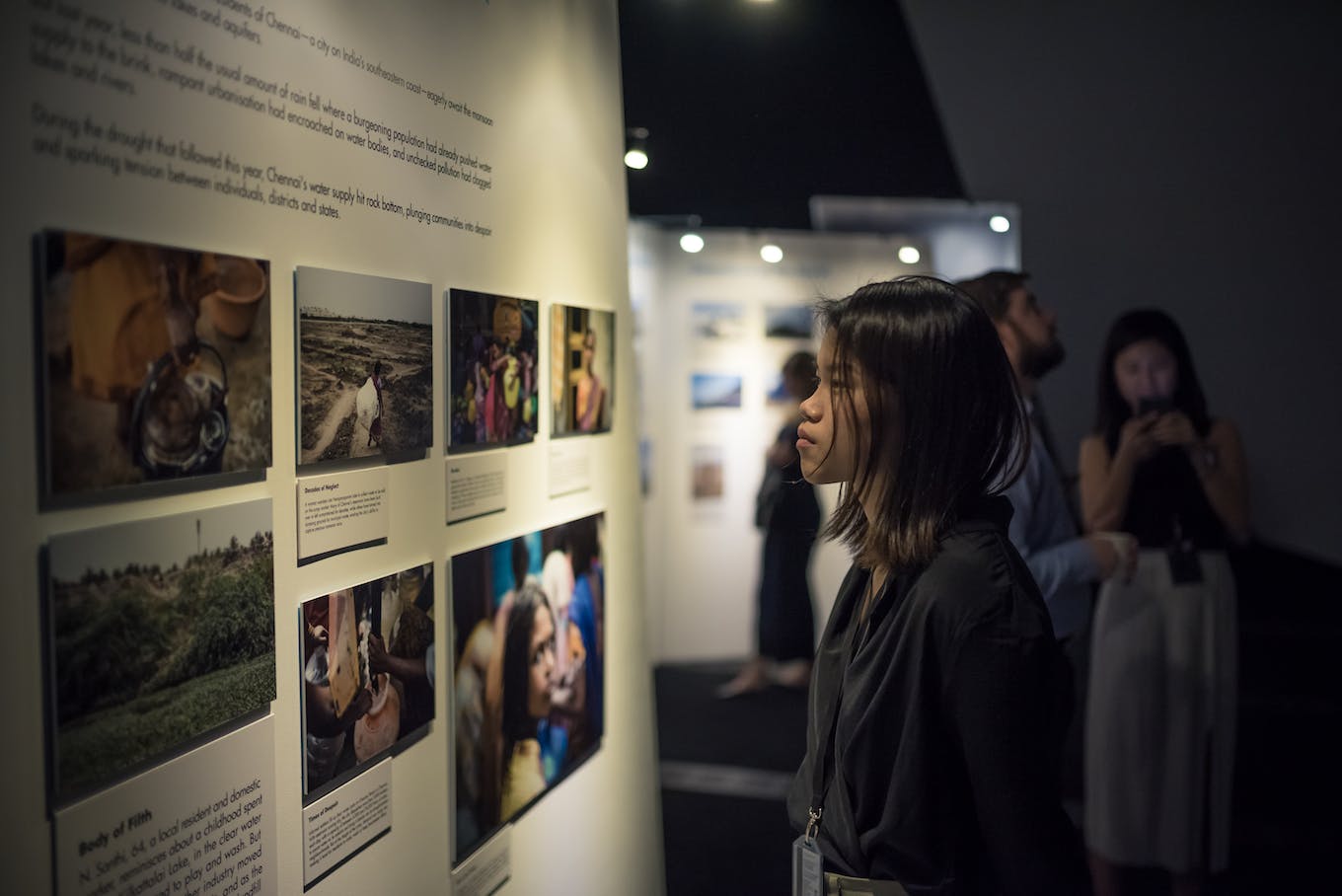 The exhibition explores the connection between the Arctic and Asia. Image: Eco-Business

The Arctic is warming twice as fast as the rest of the world and this has repercussions on countries far away, including Singapore. For one, melting ice sheets mean that sea levels could rise by a metre or significantly more by 2100.

At the premiere, guest-of-honour, Singapore’s Minister of State for Foreign Affairs and Social and Family Development, Sam Tan, acknowledged the challenges that melting Arctic ice will pose for Singapore, one-third of which is low-lying.

Singapore has been an observer at the Arctic Council since 2013 and supports a robust global response to climate change, said Tan. It has rolled out measures such as a carbon tax on major emitters.

Anita Nergaard, Norway’s Ambassador to Singapore, said one in 10 people in her country live in the Arctic.

She herself grew up in the region, a “magical place” where the sun does not set in the summer and never rises in winter.

Amid warming temperatures, business interest is growing in the Arctic, including in oil and gas exploration, fisheries, tourism and shipping. These carry opportunities and risks, said Nergaard.

“Some believe that due to the effects of climate change, we must reduce or prevent activity in the Arctic. Norway does not share this idea,” she said.

Norway bases its policies on scientific findings and believes it is possible to strike a balance between “protection and production”, or the sustainable harvesting of resources and protection of the environment.

“The Arctic certainly holds great potential but we must respect its environmental limits,” said Nergaard. 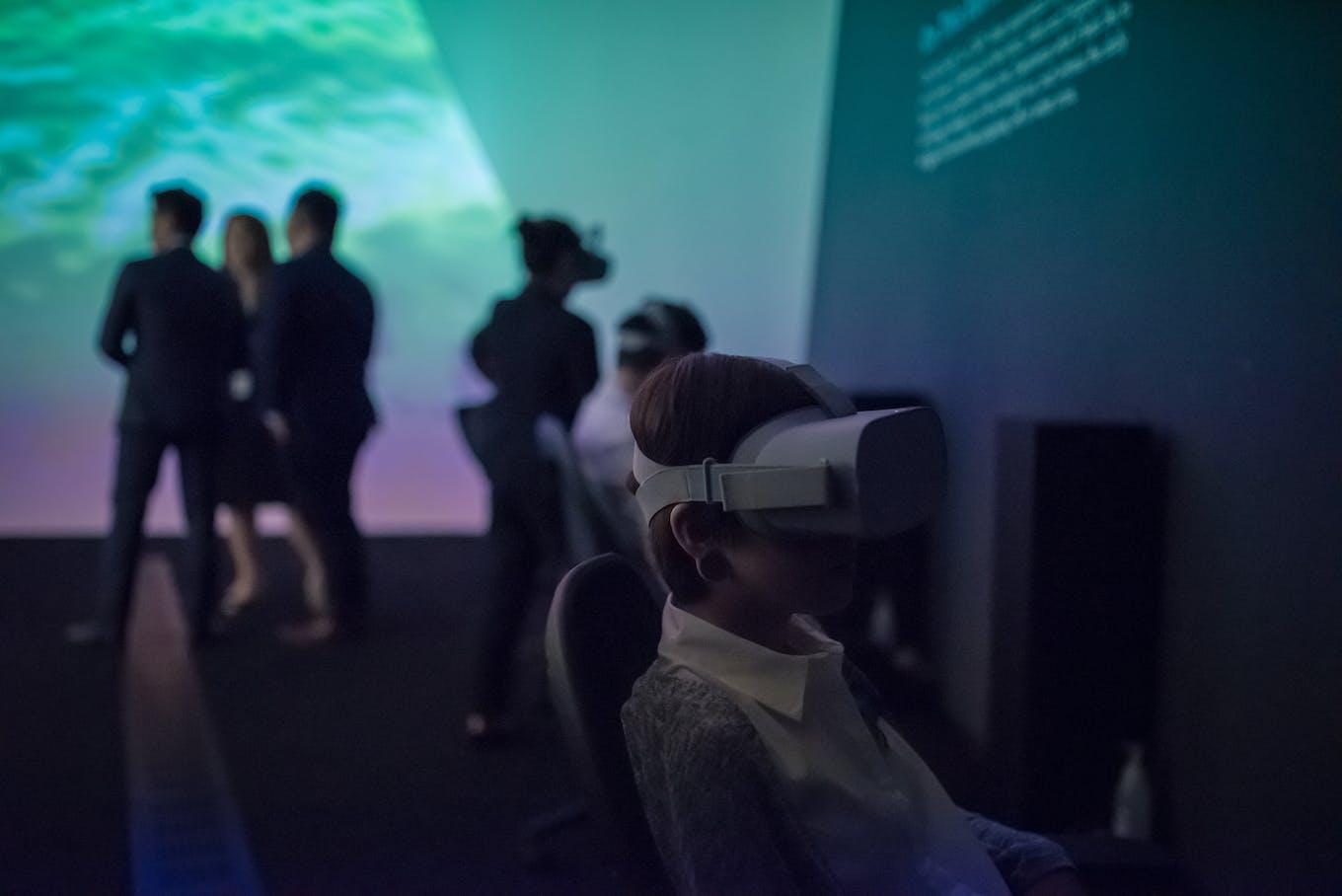 A 360° video will show viewers climate impacts in the Arctic, Chennai in India and Singapore’s port. Image: Eco-Business

On a panel discussion featuring Eco-Business’ exhibition partners on Friday, companies were asked if business action on climate change was an oxymoron.

The company buys from almost five million farmers globally and sells to 22,000 customers, which in turn sell to countless consumers, he said.

There are short-term costs in putting more sustainable systems and practices in place and from not taking short-cuts, he said.

Some opportunities have to be forgone in the short term in order to build longer-term sustainability and value, but it is worthwhile, McLeish added.

Singapore electricity retailer iSwitch sells electricity from the national power grid to homes and businesses, and its chief commercial officer Andrew Koscharsky said 15 to 20 per cent of about 100,000 residential customers have signed up for carbon-neutral electricity. While the proportion is still “not enough”, starting a conversation about carbon offsets was even tougher three years ago, he said.

Under iSwitch’s carbon-neutral electricity plans, the retailer obtains carbon credits generated and issued by United Nations-certified projects on its customers’ behalf. Koscharsky said the credits are from wind farm projects in brown-coal territories in China, and that the retailer is open to other projects.

“There’s no mandated scheme for carbon credits in Singapore. Hopefully that’ll come soon, where all retailers have to procure certain carbon credits for a percentage of their electricity,” said Koscharsky.

Singapore’s distribution of revenue from its carbon tax, priced at S$5 per tonne of greenhouse gas emissions from 2019 to 2023, is also an opportunity to help challenge the oxymoron of business action on climate change, he said.

Visitors to Changing Course 2019 may contribute to a campaign by Eco-Business’ sister non-profit organisation, EB Impact, to raise US$10,000 to plant 10,000 trees in four Asian countries. The exhibition runs until Nov 3 at the ArtScience Museum.

The low-lying island-state has opened a seed bank, boosted food security and is beefing up its drainage and infrastructure. But there’s more it can do to tackle the existential threat of climate change, experts say.
As sea levels rise, can Singapore ratchet up the ambition of its climate targets?

As global temperatures rise, concrete jungles are packing the heat and putting the lives of urban dwellers at risk. How are Asia's metropolises coping with hotter weather?
Can Asia's climate-cooked cities beat the heat?