What does woke capitalism mean in Asia?

Do companies really care about social and environmental issues or are they just driven by the money made in the name of sustainability? And do Asian companies care less than Western firms?

In today’s consumption-driven yet increasingly conscious world, you can walk into a supermarket and find Pantene shampoo empowering women to participate in sports; a Gilette razor telling men to be ‘the best they can be’; even tubs of Ben & Jerry’s ice-cream are calling on people to #resist.

Welcome to the era of woke capitalism, a time when companies appear to have developed a conscience and are adopting socially-good, progressive messaging in their advertising to appeal to a new generation of consumers.

The latest research on consumers from the millennial and Gen Z generation has revealed that more young people are looking for businesses that do more than infuse their brands with purpose. Companies are now expected to directly address and take action on hot button issues, as young consumers become more informed and empowered by their ability to access information and technology as never before.

From television commercials to billboards, businesses are trying to inch themselves towards the right side history by taking a stand on the most important issues of the day, from gender discrimination and climate change to racism and social injustice. This has led to the rise of woke capitalism, a popular form of commodity activism that has companies adopting the veneer of progressive values for profit.

Does business walk the talk?

Woke, a term that originated in the African-American vernacular, has long been used in the community to refer to being socially-minded or aware of issues of racial and social justice. However, it only started becoming part of pop culture lexicon recently due to widespread media coverage of police brutality against African-Americans and the spread of the #BlackLivesMatter movement.

In the United States, brands such as Nike and Pepsi have received criticism for commodifying the #BlackLivesMatter resistance, although the latter garnered harsher flack for trivialising the movement with its tone-deaf commercial starring supermodel Kendall Jenner.

Today, woke can be used to refer to general awareness of not just social but also ethical and environmental issues. The term woke washing now describes a calculated brand strategy not too different from green or pink washing, where companies hype up their environmental credentials or claim to support women and LGBT rights.

“We always tell our brands that they have to be very careful because the message has to make sense and show all the way through. It’s good to show an opinion but they also have to walk the talk,” says Rigmor Berthier, co-founder of Lime Agency, a design and marketing company that works with many social enterprises in Singapore. 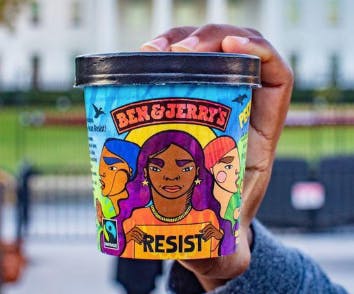 One company that tries to walk the talk is Ben & Jerry’s, which introduced a limited batch of ‘Pecan Resist’ flavour pints to “celebrate activists who are continuing to resist oppression, harmful environmental practices and injustice.” The Unilever-owned ice cream company revealed that it will donate US$25,000 to each of four organisations that tackle issues of climate change, racial injustice and gender equality.

Aarika Lee, marketing director at Singapore-based branding and marketing agency, Elementary Co., agrees that businesses need to go beyond superficiality and reflect the values they espouse in their own value chains: “If a company is interested in longevity and building a true brand story, they need to follow through with action, because most consumers are educated these days.”

Especially when it comes to issues such as sustainability, which is fast becoming a business trend, “consumers can be quick to unravel you if you’re not staying true to what you say,” she adds.

Is woke capitalism a thing in Asia?

While the conversation around woke capitalism has primarily taken place within the American context, Asia has seen a fair share of companies jumping on the woke bandwagon.

In 2017, Procter & Gamble’s cold medicine brand Vicks launched an ad campaign in India which followed the story of a transgender mother and her adopted daughter who dreams of becoming a lawyer to fight for transgender rights. The ad was praised for its sensitive delivery of taboo topics without pushing the Vicks product.

Elsewhere in Asia, Sunsilk Thailand also addressed the stigma around transgendered people in 2018 by featuring the coming-of-age story of Rock Kwanlada, the country’s transgender beauty queen, in its new ‘Hair Talk’ ad.

Even food and beverage companies have given visibility to LGBT issues, as seen in McDonald’s 2016 commercial in Taiwan. The film, regarded as a bold statement of inclusion from a major marketer in Asia, depicted a scene of a gay youth who comes out to his father over a cup of McCafe coffee.

However, according to Berthier, woke capitalism in Asia does not necessarily serve to fight a system or cause, as is the case in the US. Consumers in this region are less likely to buy a product because it has a cause behind it, as they might not believe they have as much consumer power as people in the US.

“In Asia, the message is more about doing good and helping people in need at home and in the region,” she says.

Addressing development issues such as employment and education through corporate social responsibility is still a bigger practice in Asia than pushing ad campaigns that co-opt social and environmental movements.

According to a 2018 report by global research group Kantar called Purpose in Asia, causes that dominate global media and international brand campaigns, such as climate change and gender equality, carry little sway in Asia.

[Asian] consumers can be woke about an issue, but ultimately if a brand offers a discount, they’ll pick that one.

For consumers in the region, health and well-being and ending poverty—causes deemed closer to home—matter more personally.

Firrdaus Yusoff, associate creative director at the Singapore office of global advertising agency DDB, agrees, noting that in Singapore, where brands are still very traditional, their ad campaigns “need to be phrased as doing good, instead of taking a stand against something.”

While there has been a more conscious effort by brands in the region to sell socially-minded messages with their products, there hasn’t been an earth-shattering shift to woke capitalism, he says.

According to Yusoff, the culture of pragmatism in Asia also means that “consumers can be woke about an issue, but ultimately if a brand offers a discount, they’ll pick that one.”

He states that major campaigns such as Nike’s ‘Just Do It’ ad starring ex-NFL star and activist Colin Kaepernick, and Gilette’s latest ‘We Believe’ film would not resonate in a conservative country like Singapore, where social movements shy away from dissent.

Yusoff also questions the role that advertising plays in many Asian markets. “Is advertising viewed as that vehicle of change, as it is in the US? Companies have a powerful tool at their disposal, but whether they’re willing to use advertising to advocate for change is a different story,” he says.