The child soldiers of the Philippines fighting an environmental war

After a tragic landslide a decade ago, young Filipinos responded by planting thousands of trees and risked their lives holding those responsible for deforestation to account.

When a landslide killed 97 people near a treeless mountain in the Philippine municipality of La Trinidad, Benguet, in 2008, 30 child survivors declared war on deforestation.

Armed with shovels pick-axes and trowels, they waged it in several villages, planting thousands of trees. They brought the war to the streets too, protesting against corporations and politicians who were felling trees. They participated in regional festivals that celebrated the ecological, cultural and social relevance of trees.

The young eco-warriors’ most challenging battle was fought against a formidable enemy—their government. One of them Jason Pul-as, now 17, a senior in high school, is already battle-scarred.

“We have not stopped fighting. We won some, we lost some. We lost in the Supreme Court to save some trees in Baguio City, but won against a mining company that degraded a town. We also lost a case that could have saved thousands of trees along the Philippine North MacArthur Highway,” he recalls.

I was profiled, unidentified people went to my school and got all sorts of information about me. My mother was warned to tell me to stop protesting.

Since that fateful day in 2008, Pul-as’ group, realising that most of the schools in La Trinidad are set against mountains, planted trees in 31 schools in a bid to avoid history repeating itself.

Each school was planted with an average of 1,000 trees mostly Benguet pine, Japanese alder, coffee and Redbeard. These were planted to prevent erosion and landslides that are prevalent every rainy season in a region situated some 1,700 metres above sea level. 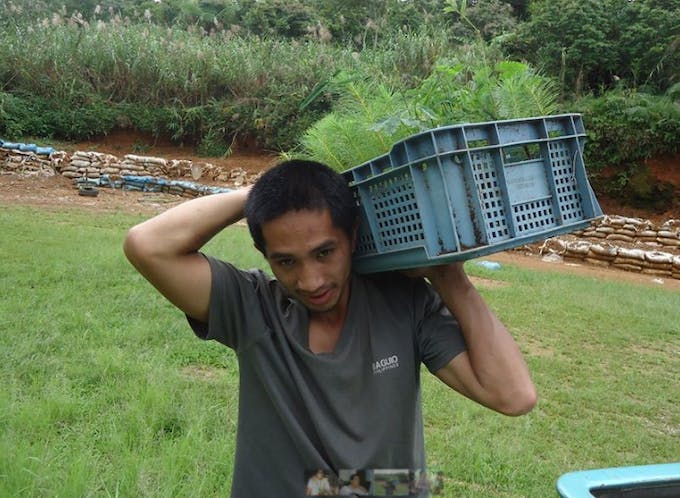 The group sought the help of the Cordillera Ecological Center (CEC), an active Philippine environmental NGO that provided seedlings and technical expertise, and beat government foresters to the draw in several forestation efforts.

Besides planting trees, the group is active at organising street protests against all forms of tree-killing.

“At 12, I joined street rallies against a mall and a plastic company that killed hundreds of trees. We protested against a powerful and moneyed congressman who destroyed a watershed and sued him in court. We opposed inappropriate waste landfills approved by senseless government officials,” Pul-as recounts.

Thousands of residents have protested in Baguio, the country’s summer capital, often called the “City of pine trees” against their city government officials and the Department of Environment and Natural Resources (DENR) for allowing the felling of many pine trees to make way for commercial development.

“Our attempts to stop the tree cuttings were often unsuccessful because some government leaders are either uncaring or corrupt,” Pul-as says.

The city government has been blamed for issuing tree cutting permits that favour big business. In 2015, environmentalists were outraged by the felling of pine trees to enable the expansion of a local mall.

Under Philippine law, it is prohibited to fell or damage planted or growing trees in public areas. But thousands of trees in parks, schools and roadsides have been removed in recent years.

“When you put economy over ecology, it is greed,” he says.

The allegation of illegal tree felling was denied by city mayor Mauricio Domogan who claimed it was the DENR that have been issuing tree cutting permits. DENR has denied this.

“I cannot do anything [to stop the tree cutting],” mayor Domogan has said.

The Philippines is not the safest place for environmental defenders, ranking as Asia’s most dangerous place for activists. The blend of politics with big business is often fatal for the environment and also those who seek to protect it, and Filipino child activists are not spared that risk.

Pul-as shares: “I was profiled, unidentified people went to my school and got all sorts of information about me. My mother was warned to tell me to stop protesting.”

Martha Songap is another child activist who risks her life for the environment. The 14-year old girl, along with fellow students from Mankayan National high School, is opposing a mining company dumping mine waste in her community’s forest.

“A mining company has been dumping highly toxic mine tailings in our forest, which has killed some trees,” she says.

The forest they are protecting was once a mine-denuded, sinking and eroded 50-hectare public land that is now teeming with pine trees. They planted it with the help of volunteers.

Children are at the forefront of environmental protection, they clean trash, plant trees, and recycle, but these efforts are often taken by granted.

Trained by an NGO to plant trees, Songap and her school mates plant trees every year in a bid to stop soil erosion.

“One day, to our horror, we found trees dying, only to discover a mining company was dumping mine waste in our forest at night. We protested with placards against the mining company, and it stopped its illegal covert operation,” she says.

Many schoolchildren in the Philippines devote thousands of hours to environmental issues, from waste and recycling, to water conservation and reforestation. Dr Remedios Taguba, former regional director of the Department of Education (DEP-ED), says it is the teachers’ responsibility to educate students to keep the environment safe, clean and green.

However she points out that more often than not, childrens’ contribution to earth care go unrecognised.

“Children are at the forefront of environmental protection, they clean trash, plant trees, and recycle, but these efforts are often taken by granted,” she says.

“Take the case of the city’s Panagbenga Festival that draws more than a million tourists a year - the hotels, shops, and restaurants make a killing in the tourism bonanza and laugh their way to the banks while the tonnes of trash left by visitors are cleaned up by students,” she says.

So why are children made to do the dirty work? “Undoubtedly, there is a need for adults to model their behaviour as  leaders, “ Taguba says, adding, “adults should not create situations where children become the environmental foot soldiers, bearing the burden of responsibility for problems to which they contribute very little.”

Last week, 100 children wrote to President Rodrigo Duterte, pleading that he put an end to the Baguio city government’s tree-clearing plans. Others urged him to close the city to tourists, as he did to the tourist hotspot of Boracay last year, until the city cleans up its act.

Songap is heartened by the childrens’ desire to make their world safer and hopes more are inspired to take action across the country. As Pul-as points out, “one can never be too young to make a difference.”