The EU got less electricity from coal than renewables in 2017

For the first time, the European Union generated more electricity from wind, solar and biomass than from coal in 2017, according to new analysis from two thinktanks.

The figures, from London-based Sandbag and Berlin-based Agora Energiewende, are a best estimate, based on near-complete electricity market data from each of the 28 EU member states.

Their report says: “This is incredible progress, considering just five years ago coal generation was more than twice that of wind, solar and biomass.”

Despite this new milestone, EU power sector emissions were unchanged in 2017, the analysis suggests. Low-carbon sources met 56 per cent of demand, a figure that is unchanged since 2014.

Since 2010, output from these renewable sources increased by 377TWh, more than the UK’s current total annual demand. Most of this increase is due to wind (57 per cent) and solar (25 per cent), with a smaller contribution from biomass (18 per cent). 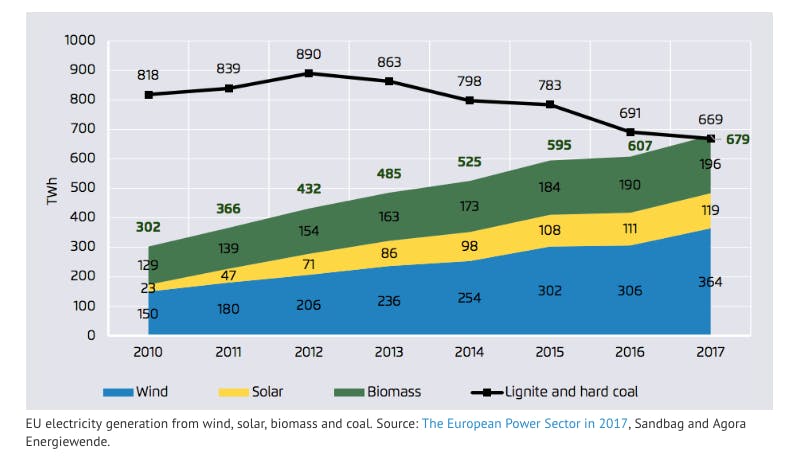 Another significant milestone was crossed in 2017 with wind generation overtaking hydro for the first time. The US is expected to see a similar switch this year or next.

In 2017, biomass generation increased by 5 terawatt hours (TWh, 3 per cent), leading Sandbag and Agora to say: “The biomass boom is over in Europe.” The report adds:

“Given concerns over biomass sourcing…the slowdown is, perhaps, a relief. Co-firing in coal power plants is no longer rising and the pipeline for planned conversion of coal power plants to run on biomass is quite small.”

Germany is the largest contributor to biomass generation, where hundreds of small biogas plants benefited from generous subsidies, which have since tailed off. The UK is the second largest, generating 16 per cent of EU biomass electricity, of which around two-fifths is from Drax.

This coming of age for newer renewables has been matched by falling coal output, down 25 per cent in five years. There was a particularly steep fall in 2016, as a “huge” coal-to-gas switch across the bloc helped push EU power sector CO2 emissions down by nearly 5 per cent. This year, EU coal generation fell 3 per cent.

Air pollution rules, ageing capacity, stagnant demand and competition from gas, as well as renewables, have spelt trouble for the finances of the EU’s coal fleet. In the UK, a top-up carbon tax has been significant in driving coal’s decline.

The UK is among five EU member states to have announced coal phaseouts. It recently confirmed plans to close its remaining coal plants by 2025. It has been joined by France, with a 2021 phaseout, as well as Italy, by 2025, with the Netherlands and Portugal following, in 2030.

The Netherlands’ move is notable, because coal still supplies a quarter of its electricity and its remaining coal-fired plants were mostly built only two or three years ago.

Germany is among a further five member states discussing the idea of a coal phaseout. A draft coalition agreement between Angela Merkel’s Christian Democrats (CDU) and the Social Democrats (SDP), leaked earlier in January, commits to agreeing a firm coal phaseout date.

While the likes of Poland are far from considering a coal phaseout, its energy minister says no new coal plants will be built beyond those already under construction. Some 157 gigawatts (GW) of coal capacity remains operational across the EU.

While renewables rise and coal falls precipitously, one relatively constant feature of the EU’s power sector has been nuclear. In 2017, it was once again the single-largest source of electricity, generating 25.6 per cent of the bloc’s power, as the chart below shows. 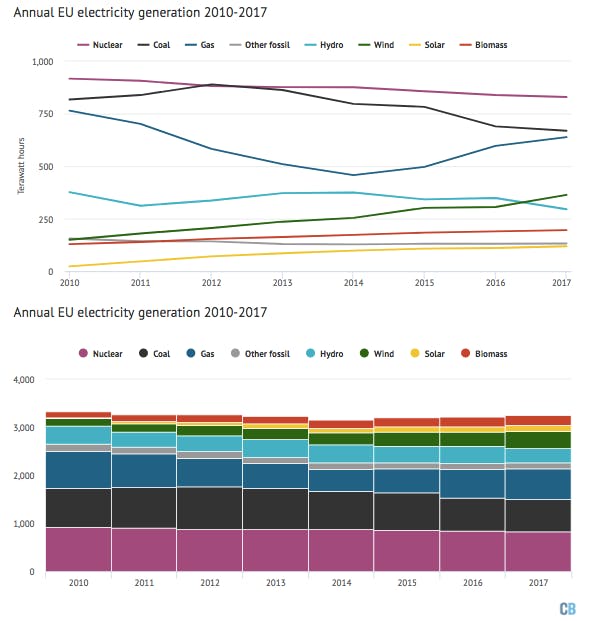 Nevertheless, EU nuclear output has fallen slowly as old reactors have closed and, over the past two years, as a result of temporary closures imposed by safety regulators. Generation fell another 1 per cent in 2017.

EU nuclear reactors are ageing, with relatively few new plants being planned or built. The UK’s plans for new nuclear are an exception.

Germany will complete its long-planned “Atomausstieg” (nuclear phaseout) by 2022. French president Emmanuel Macron said recently he would not do the same, as his priority was cutting CO2 emissions. France remains heavily reliant on nuclear power, see below.

EU member states each have unique electricity mixes. These result from geography – the natural resources available in each place – and from government policy.

The maps below show how much each country relies on different fuels. They show coal-heavy central and eastern Europe (top left) through to the import-dependent periphery (bottom right). 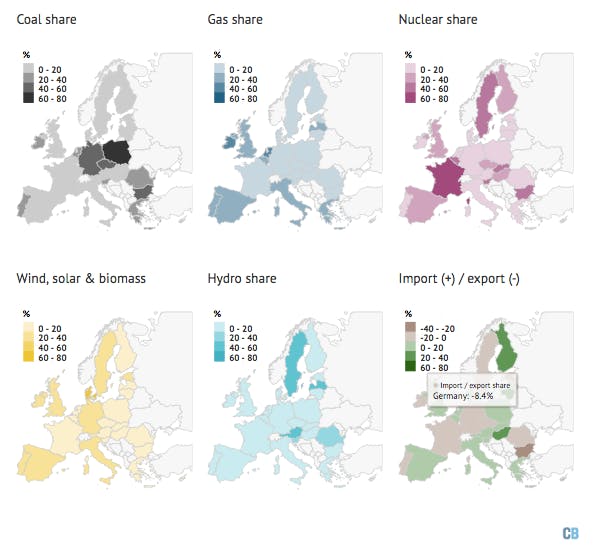 Notable features include that Germany is still the fourth most coal-dependent EU country, deriving 40.5 per cent of the electricity it consumes from coal, despite getting another 36 per cent from renewables. Wind, solar and biomass met 65 per cent of Danish demand last year, far ahead of Germany, its nearest rival.

Apart from Denmark, the UK is the most-improved in terms of cutting coal use and increasing its renewable share. Coal’s share fell from 28 per cent in 2010 to 7 per cent in 2017, while wind, solar and biomass increased from 6 to 21 per cent.

In CO2 terms, last year’s changes in the EU electricity mix cancelled each other out. Indeed, low-carbon sources met 56 per cent of EU demand in 2017, a figure that remains unchanged since 2014.

One factor pushing emissions upwards last year was electricity demand, up a modest 23TWh (0.7 per cent) in 2017, as the chart below shows.

This is the third year of increases, as economic growth overwhelms the impact of energy efficiency policies. The UK was the only exception, continuing the downward trend that has seen it save the equivalent of 2.5 Hinkley C nuclear plants since 2005.

Another factor increasing CO2 was that gas use also rose, up 42TWh (7 per cent), while hydro and nuclear both fell. Hydro had a particularly bad year, falling 54TWh (16 per cent). This was predominantly down to a severe drought in southern Europe that saw hydro output halve in Spain and Portugal.

Factors pushing down on CO2 were the continued coal decline and a record year for wind, up 58TWh (19 per cent). Overall, Sandbag and Agora estimates suggest that emissions remained flat at 1,019m tonnes of CO2 in 2017.