The curse of ‘green gentrification’

Heavily polluted communities should celebrate environmental victories — and brace themselves for what comes next.

Sunset Park, Brooklyn wasn’t always so nice. Today, it boasts a waterfront park replete with baseball fields, tide pools and a seaside esplanade, but not long ago that park was a hazardous waste site.

The credit for that transformation rests, in part, with the residents of Sunset Park, who pushed the city to clean up the waterfront. Over the last two decades, locals have racked up victories faster than Tom Brady. They blocked the construction of a gas-fired power plant, campaigned for a new shoreline walking path, and pressed transportation officials to remake a major street, adding trees and protected bike lanes, among other measures.

But every action has an equal and opposite reaction. In Sunset Park, a years-long crusade to make the neighborhood more livable spurred a wave of investment. Developers erected luxury apartments and remade an aging manufacturing complex into a hub of art, fashion and technology. To a neighborhood known for its cash-only taquerias came artisanal pickles, avocado toast and what is reportedly America’s most expensive cup of coffee — an $18 mug of slow-drip opulence.

The surge of development has led to a dramatic rise in the cost of housing. Since the waterfront park opened in November, 2014, the average price of a condo in Sunset Park has shot up by 67 per cent, far outpacing Brooklyn as a whole. Day by day, the neighborhood is turning wealthier — and whiter — as longtime residents are priced out of their homes.

Unless we change the status quo, tens of thousands of hardworking families will be pushed out of their homes.

Some now fear what the closure of a waste transfer station will do to the cost of housing, said Elizabeth Yeampierre, head of Sunset Park environmental justice group UPROSE. “It’s been really heartbreaking for us to think that we spent our lives trying to level the playing field,” she said, “that people have to chose between affording to live here and being able to breathe.”

“It’s not just happening here in Brooklyn,” Yeampierre said. “It’s happening all over the country, where really amazing, diverse communities are being homogenised.” 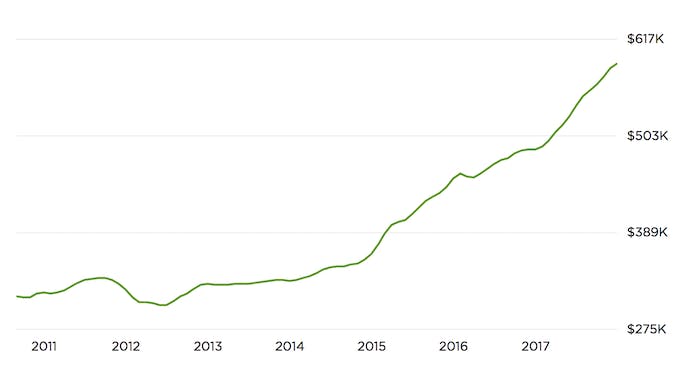 The average price of a condo in Sunset Park, Brooklyn since late 2010. Source: Zillow

The opening of the High Line, an elevated park on the west side of Manhattan, led to the rapid gentrification of the surrounding neighborhood. In Washington, DC, new parks and bike lanes along the north side of the Anacostia River set off a rush of development that sent many longtime residents packing.

Green gentrification is taking a toll on advocates. Previously, said Yeampierre, “none of us were people who did housing or anti-displacement work. Now, most of the people in the environmental justice movement are fighting displacement.”

The displacement of longtime residents perpetuates poverty, according to a recent paper from the Autonomous University of Barcelona. Displaced people often end up living farther from friends, family and work, in a neighborhood with underfunded schools and meager public transit, where rampant pollution fuels ailments like asthma, bronchitis and chronic stress that drive up medical costs and erode quality of life.

Helen Cole, lead author of the paper, warns “the health benefits of greening can only be fully understood relative to the social and political environments in which inequities persist.”

There is no easy solution to the problem. When a neighborhood becomes more desirable, it is all but inevitable that the cost of housing will rise. But there are steps that city officials can take to protect residents.

A 2017 report from the California Environmental Justice Alliance calls on city officials to “stabilise the existing affordable housing stock, increase the number of affordable units accessible to all income ranges… and encourage the construction of affordable housing.” Likewise, numerous advocates have called for raising the minimum wage, which could help a multitude of struggling families make rent.

New York Mayor Bill de Blasio has pushed a slate of policies to shore up housing, including measures to protect renters against harassment, strengthen rent stabilization and finance affordable housing. “Unless we change the status quo, tens of thousands of hardworking families will be pushed out of their homes,” he said. “This has to be a city for everyone. It cannot just be a city of luxury apartments out of everyday New Yorkers’ reach.”

Nevertheless, local environmental advocates say the city can and should do more to curb gentrification. They argue that dealing with inequality is vital to tackling climate change.

Part of what makes the carbon crisis so easy to ignore is the fact that it overwhelmingly hurts people without a voice. For the most part, people with money and power live far from busy highways and coal- or gas-fired power plants. People without money or power, on the other hand, tend to live on the front lines of pollution. When officials try to aid the second group, but — as the result of gentrification—only end up helping the first, they allow this disparity to persist.

A dearth of affordable housing in neighborhoods like Sunset Park ensures there will always be people who can’t access clean air or public parks, and there will always be places where polluters can run amok. Unless policymakers tackle inequality, Yeampierre said, “we will lose in the fight against climate change.”

She argues that cities should see climate change as an opportunity to address inequality, arguing officials should reinvigorate struggling neighborhoods, not only by cutting pollution and shoring up affordable housing, but also by creating new jobs preparing for climate change, installing community solar arrays or building resilient infrastructure.

During Hurricane Sandy, Sunset Park’s recently developed waterfront business and retail center was flooded by 20 million gallons of water, inflicting some $50 million in damage. The complex remains perilously vulnerable to the next big storm. Developers, for example, might partner with the city to build flood protections and hire local workers to aid in construction.

“We’re not anti-business,” Yeampierre said. “Our people need to work somewhere. But we’re talking about working-class jobs that pay union wages that are building for a climate future that’s here — not avocado toast.”