Co-founder of environmental advocacy group LepakInSG, and one of the speakers at Singapore's first climate rally, shares the need to think beyond individual action and focus on systemic change.

“It makes no sense to me that we are told to switch off our lights when not in use, but the lights on Jurong Island [Singapore’s petrochemical hub] never seem to be switched off,” Ho Xiang Tian announced to an audience of 2000 at Singapore’s first climate rally.

In his speech, the co-founder of environmental advocacy group, LepakInSG, argued that the city-state’s climate policies have been insufficient and governmental messaging over-emphasise the importance of individual action although households only contribute to six per cent of carbon emissions. Industries in Singapore, however, are responsible for ten times the amount of emissions.

“Singapore only takes responsibility for 0.11 per cent of the world’s emissions, and that is always the reason cited for our lack of climate action… But we ignore the fact that we are the world’s fifth-largest refinery export hub, or that the fuel we provide to ships and planes emit almost three times of our own national emissions,” he said.

LepakInSG was born out of a dinner with two other friends in 2017, with the initial aim of being a one-stop calendar for green events in Singapore. But after just three days of mind-numbing administrative work, the founders decided to organise fun environmental-related events for themselves.

There’s still a chance to limit the worst consequences of climate change. It’s the hope that we can limit this damage that keeps me going.

The first year of one-off events included environmental board games nights and a nature walk while playing Pokemon Go to observe the flora and fauna that inspired characters in the popular game. By the second year, the group decided to organise programmes with lasting impact.

LepakInSG started the project Sea Our Shores in conjunction with International Year of the Reef in 2018. The entirely volunteer-run team ran monthly workshops about different marine environments in Singapore to raise awareness and action, and simultaneously crowdsourced ideas for the marine conservation communities in Singapore.

In the same year, the team started PublicAction, an initiative to read government publications focused on environmental issues with members of the public and send feedback to relevant government agencies.

Over the years, what started out as a simple idea to consolidate green events in Singapore has evolved into an environmental advocacy group that connects, educates, and aims to improve public literacy on government publications.

In this interview with Eco-Business, Ho shares the importance of systemic change, the best approach for community building, and LepakInSG’s future plans.

I’m studying sustainable infrastructure engineering (land). The brackets mean my focus is on land transport, like railways, MRT lines, tunnels, and signalling. The course basically prepares us for a career in the land transport industry. Initially I wasn’t interested in engineering because I wanted to study sustainability-related courses. But now I realise that there’re a lot of engineering solutions for environmental problems.

Do you feel that your university course has prepared you well for a career in sustainability?

It depends on what you mean by sustainability. The course equips you with the technical knowledge, but it doesn’t tell you that this industry [transportation] that you’re going into contributes significantly to sustainability.

The course doesn’t get you to think about what environmental sustainability is. Perhaps it’s referring to a different kind of sustainability, like ensuring that your train system runs smoothly in the long run and doesn’t breakdown.

Who are your sustainability role models?

When I was first starting out, I followed two people around a lot; Nor Lastrina Hamid who runs Singapore Youth for Climate Action, and Tan Yi Han who founded the People’s Movement to Stop Haze (PM.Haze). They both take a consultative approach when making decisions in a group. So it isn’t just what they think goes, they ask what everyone else thinks. If anyone disagrees, they find out why that might be so and incorporate it into the final decision. I think that’s really important for community building.

Ria Tan runs the website WildSingapore, and is a nature guide. She has a lot of experience and shares her stories about what she’s done in the past with young people like me, so we don’t make the same mistakes. You can learn a lot just by having lunch with her.

What are some of your most memorable sustainability moments?

When I gave a speech at SG Climate Rally, up to that point I had never given a speech to so many people.

For LepakinSG, it was when we were first engaged by different governmental agencies, like the Ministry of Environment and Water Resources (MEWR), or National Climate Change Secretariat (NCCS) for consultations. That’s when we knew that we had enough of a presence for them to respect us and ask for our opinions.

What initiatives does LepakInSG organise? 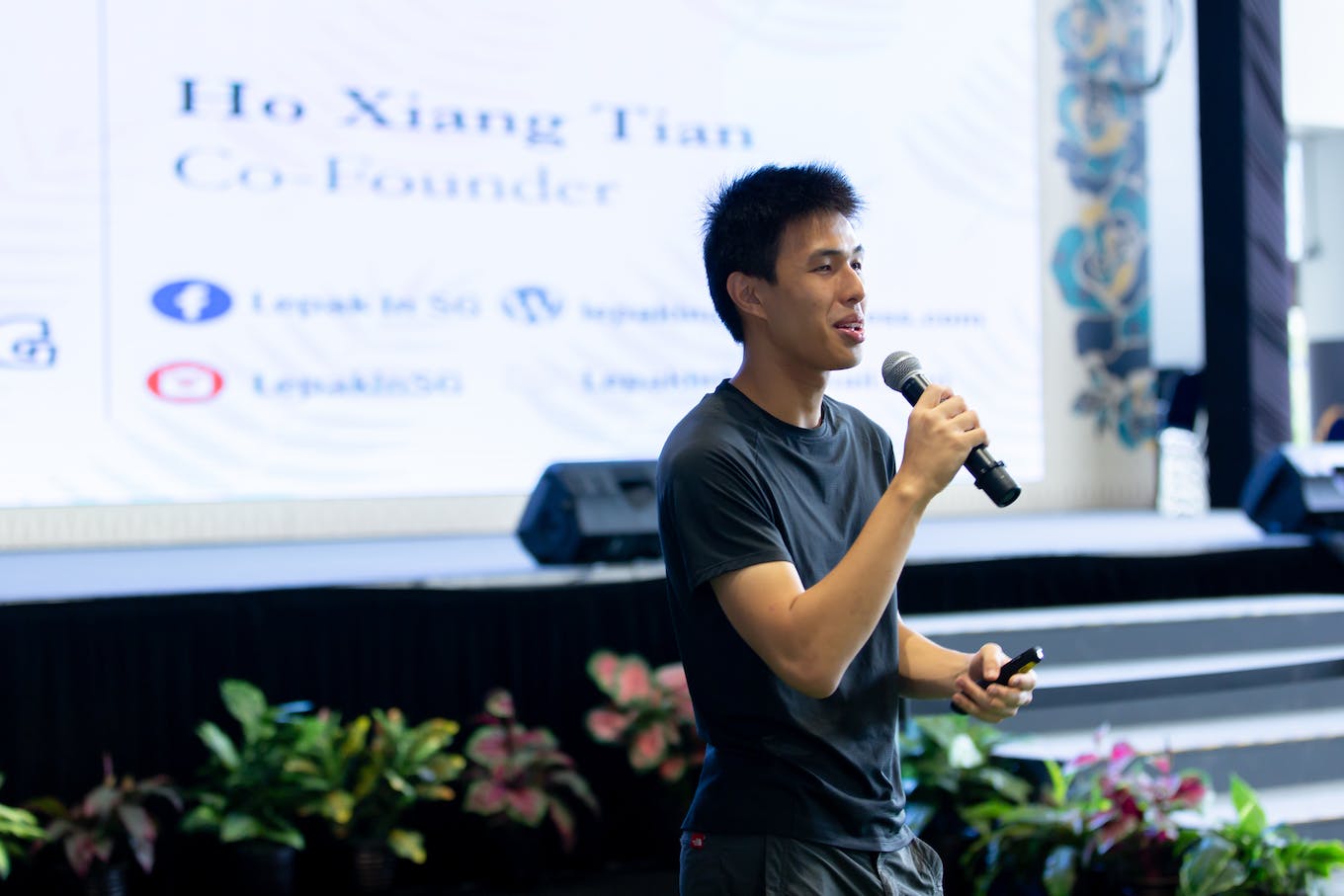 In 2018, we started PublicAction. We read government publications and get the public to give feedback about them, then we share that feedback with the relevant agencies.

The first one we did was on the Sustainable Singapore Blueprint (SSB), which was messy. The SSB is a massive document with five different pillars, and we invited people to give feedback about each one.

2019 was Year Towards Zero Waste. For that, we conducted waste workshops where we tried to get people to think beyond themselves when it comes to waste. Government campaigns are usually about how you as an individual can reduce your waste, by buying only what you need, recycling more, and so on.

But we need to think beyond the individual level, like where does waste really come from? And how can an individual do something about the waste they can’t control, like from industry? We asked people to think about why the domestic recycling rate is so low and how we can change our current systems.

So we focused on moving away from individual action towards systemic change. I think one problem with our messaging was that we put too much attention on systemic change and some people felt powerless. When that happens, people don’t want to do anything.

How do people deal with this feeling of powerlessness?

You don’t have to start with the biggest systems. If you can change the system in your school, or your company, that’s a lot more manageable than trying to change the whole system in Singapore. It’s the small wins that keep you going.

What keeps you going personally?

It’s the idea that I want a future that is liveable. If you look at the impacts of climate change now, it’s already quite bad. In the future, it’ll only get worse. But how much worse it will get is the big question. There’s still a chance to limit the worst consequences of climate change. It’s the hope that we can limit this damage that keeps me going.

What does the rest of the year look like for LepakInSG?

We’re working on a visioning exercise to see what Singapore could look like in 2030. We’ll take government projections, then analyse the science and see how climate change is likely to affect us in 10 years’ time. Then we’ll ask the public if this is a future that they want to see.

The former environmental control officer for a coal plant and mine has been tasked to help the Indonesian pulp and paper maker meet its sustainability commitments, which include achieving net-zero emissions by 2030.
APRIL appoints Susan Slabbert as interim sustainability head for rayon fibre business

Among 300 firms, there are 44 different job titles for the same sustainability head function. According to the study by Dow Jones, the corporate world's approach to sustainability is muddled and clear reporting lines are lacking.
Global business survey finds 'little consistency' in how sustainability leadership roles are organised