The latest calculation, said to be a highly conservative estimate, shows that these small and medium-sized businesses minimally emit about 29.7 million tonnes of carbon dioxide annually.

A new study has found that small and medium-sized enterprises (SMEs) in Southeast Asia have a combined carbon footprint that exceeds the total annual national emissions of Brunei or Cambodia.

SMEs in Southeast Asia are estimated to produce 29.7 million tonnes of greenhouse gas emissions annually, according to a new estimate by Singapore’s ISEAS-Yusof Ishak Institute. The calculation, published in a research paper in the latest issue of the ISEAS Perspective, has never been done before for SMEs in the region.

SMEs form the backbone of Southeast Asian economies, as they account for more than 97 per cent of businesses in the region. Few attempts, however, have been made to gauge their relative contribution to global warming, said the researchers.

The new estimate of carbon emissions of SMEs in Southeast Asia represents 1.8 per cent of total annual emissions produced in the region, which is low compared to the United Kingdom for example, where about 6 to 24 per cent of all emissions are attributed to SMEs, said researchers who led the study.

The figure, however, far exceeds the total annual national emissions of Brunei or Cambodia, which are respectively at 10 and 15 million tonnes, and comes close to that of Laos, where 34 million tonnes of greenhouse gases are emitted annually.

We are trying to make the smallest possible claim or come to a baseline value, and ensure that it would not overstate reality. In fact, I think the actual figure will be considerably higher.

The estimate, described as highly conservative, is meant to serve as a starting point for further analysis. It can help policymakers develop plans that would push smaller firms to reduce emissions, said Michael Schaper, visiting senior fellow at the ISEAS-Yusof Ishak Institute, who has been closely following how small firms adapt to climate change. The study is co-led by Ryan Wong, lead researcher at the institute’s Climate Change in Southeast Asia Programme.

Schaper, also an adjunct professor at John Curtin Institute of Public Policy in Western Australia, told Eco-Business that the process of collecting relevant data on SMEs in the region has been fraught with challenges. “There is no coordinated effort for small businesses in Southeast Asia to report on how much they emit. There is not even a single definition for what constitutes a SME,” he said.

Schaper said that the research demonstrates that there are simple ways to calculate the impact that SMEs have on climate change. “A lot of scrutiny now is on big corporations, and rightly so, but more attention is required to look at how the SME sector can reach net zero too. We do not know how important or unimportant the issue is, if we do not know how much the SMEs are responsible for, in terms of greenhouse gas emissions,” he said. 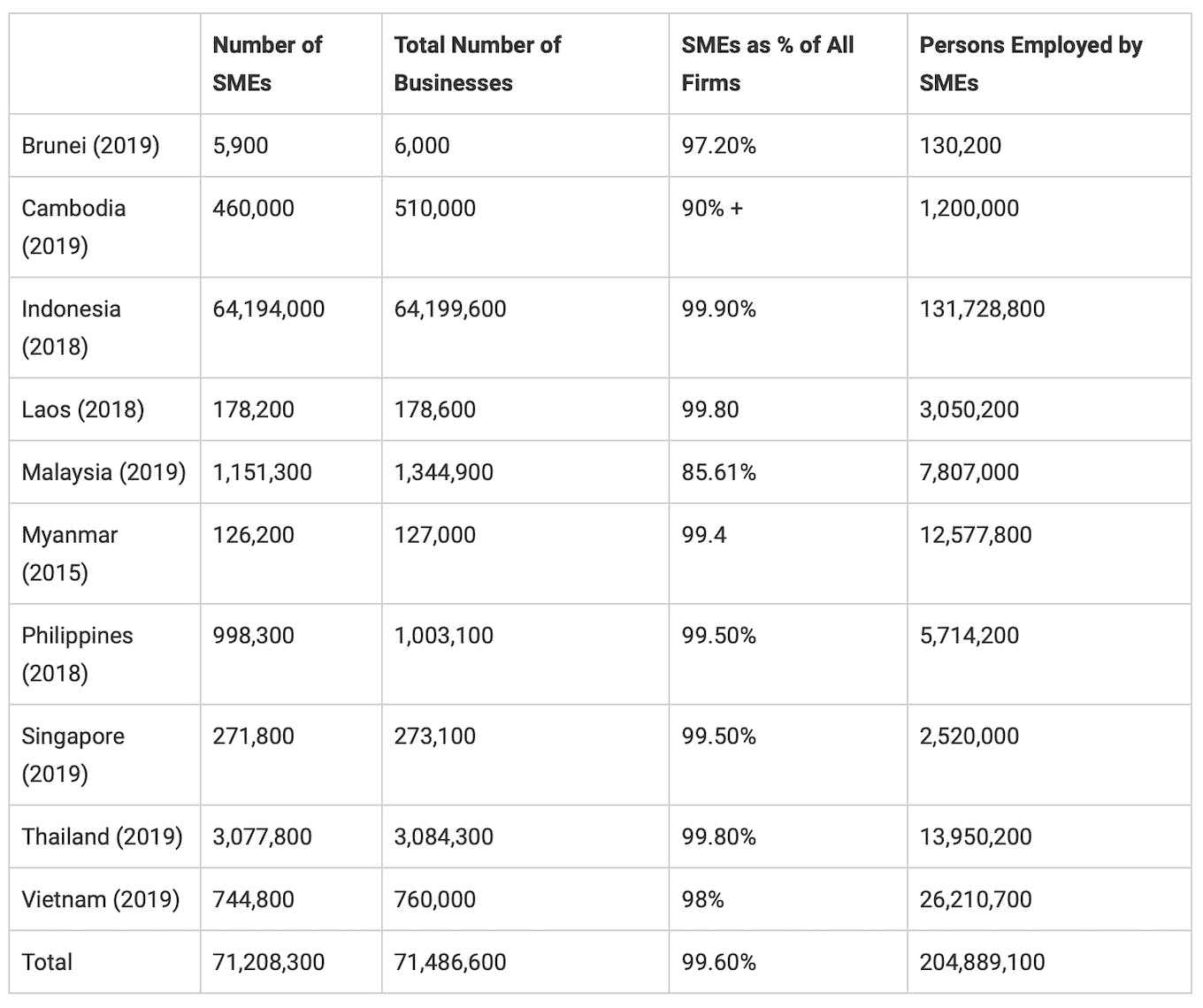 Number of SMEs in Southeast Asia and the number of people they employ. Image: ISEAS-Yusof Ishak Institute

There are estimated to be more than 71 million SMEs in Southeast Asia, employing about 205 million people. In the study, Schaper and his co-researcher first looked at the emissions produced by a single-person, home-based service sector firm, the most common form of SME in Southeast Asia, and a definition employed by the International Labour Organisation (ILO).

They intentionally omitted heavy industry and emission-intensive activities, and took the most conservative emission estimate by Ecometrica, an environmental monitoring platform, where a person is estimated to approximately consume about 1.2 kilowatt hour (kWh) of energy in a home office setting per working day.

This included the use of air-conditioning or heating, lighting, laptops, mobile phones and printers.

The quantum that was derived was then converted into emissions, by comparing it against a regional Emission Factor value derived from estimates by the Asian Development Bank (ADB), explained Schaper. Estimated at 0.145 tonnes of carbon dioxide per capita per annum, this was multiplied against the number of people in Southeast Asia working in the SME sector, to arrive at the final estimate for total emissions.

“With this paper, we are taking a very cautious approach. We are trying to make the smallest possible claim or come to a baseline value, and ensure that it would not overstate reality. In fact, I think the actual figure will be considerably higher. It could be double of the current estimate,” Schaper said.

The United Nations Framework Convention on Climate Change (UNFCCC), in a summary report published after the Asia-Pacific Climate Week in July last year, also said that SMEs in Southeast Asia have a crucial role in tackling climate change in the region. The report said that given the scale and pace of emission reductions needed, companies across the board need to urgently act to reduce carbon emissions both in their direct operations and in their supply chains.