SMEs can afford to switch to sustainable palm oil—why don't they?

To join or not to join? Singapore businesses explain why they took the plunge, urging SMEs to weigh the small cost of switching to sustainable palm oil against the high price of not doing so.

Small and medium enterprises (SMEs) have no excuse to avoid switching to sustainable palm oil today given the marginal cost increase involved, said businesses at a recent event on the topic in Singapore.

“Cost is not an issue, because the increase in cost from non-sustainable to sustainable palm oil is very small,” said Andrew Tjioe, chief executive of restaurant chain Tung Lok Group.

He added that it only took a few days for Tung Lok’s restaurants to switch to palm oil certified by the Roundtable for Sustainable Palm Oil (RSPO), a global certification body for sustainable palm oil. 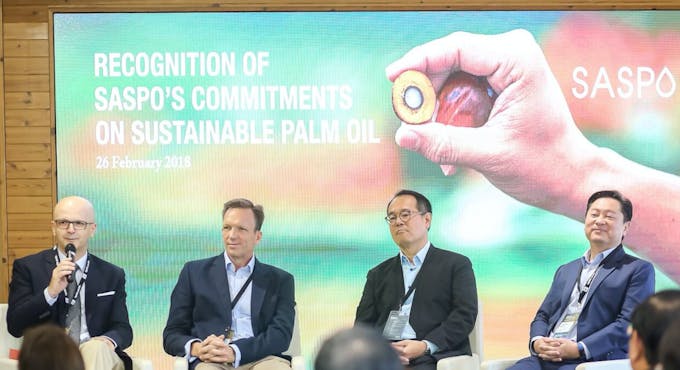 Business directors and executives at the media event organised by the region’s industry-led platform, Southeast Asia Alliance for Sustainable Palm Oil (Saspo), said the marginal increase in cost is manageable for SMEs, and comes from auditing and segregating sustainable palm oil.

Singapore’s Minister for the Environment and Water Resources, Masagos Zulkifli, who attended the event, reiterated that sustainability should not be an economic trade-off for businesses. “It makes good business sense to build environmentally resilient supply chains that thrive in the long-term.” 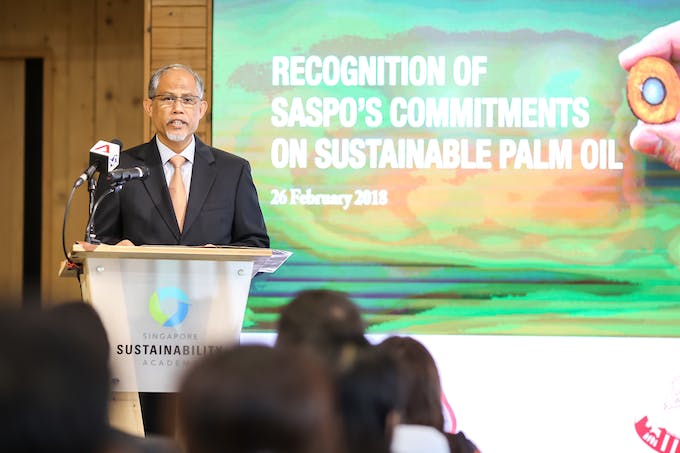 They were speaking at a press event held by Saspo, where 10 Singapore businesses including Tung Lok Group and F&N, made a public commitment to sourcing sustainable palm oil through Saspo. The voluntary platform, which champions the use of sustainable palm oil in Southeast Asia, now has 15 member companies. Together, these companies account for over 200 food and beverage (F&B) outlets in Singapore, including PastaMania and The Soup Spoon.

Southeast Asia’s most produced, consumed and traded vegetable oil, palm oil is also controversial and has been blamed for deforestation, human rights abuses and the region’s yearly haze.

Advising small and medium companies to follow suit, Simon added that “having a sustainable supply chain reduces the risk of liabilities, making it easier to find investors.”

In light of the announced ban on palm oil by the EU, Simon urged businesses to be sustainable to improve the exportability of their products, especially to European markets.

If cost is not an issue, what is?

Indifference can be a factor, said Simon who stressed that apathy among small firms is inexcusable. “Many small and medium companies usually say, ‘My company consumes a small amount of palm oil which doesn’t make a difference’. This is totally wrong. It is the small drops which make the river.”

“It may not be immediately apparent to someone why palm oil matters, but when you begin to explain that this is one of the root causes for the loss of primary habitats, the penny drops,” added Barclay, who oversees Singapore’s zoo and bird park. 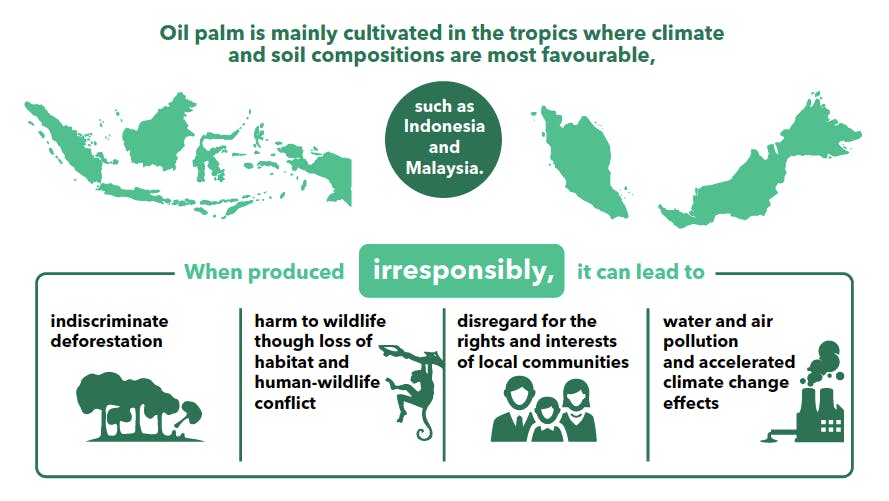 A summary of the social and environmental impacts of the palm oil industry in Southeast Asia. Image: Saspo

Another consideration is the impact of palm oil on the economy and employment. Masagos said the palm oil industry supports the transition of many communities out of poverty and improves the livelihood of farmers. Comprising 85 per cent of the world’s palm oil production, the region also reaps substantial economic benefits from the commodity.

Barclay said the solution was to find a pragmatic balance between the “small guy” that depends on palm oil for a living and the primary habitats that have to be protected.

Andrew Kwan, group managing director of Commonwealth Capital suggested that governments could play more active roles in catalysing change, by assisting small firms in making the switch to sustainable palm oil. Kwan added that infocomm technology, such as blockchain, can be used to reduce the cost of tracing palm oil sources.

Tjioe referred to WWF’s palm oil scorecard in 2017—which cited Tung Lok Group as a non-respondent—as an impetus for his company to change.

However, Tjioe said it was a challenge for Tung Lok group to get all its suppliers to comply to RSPO certification, as some produce in other countries. One way forward is for Saspo and WWF to educate, put pressure and “expose” food manufacturers who are not yet on board.

To make the transition to sustainable palm oil easier, RSPO is looking to revise its auditing standards to make them less burdensome for small companies. Stefano Savi, global outreach and engagement director of RSPO, said “the cost of sustainability can only decrease if more people jump on the bandwagon.”

But the price of devastation is high if the region fails to be sustainable. Barclay warned of an ecological crisis which will push many species towards extinction, including the Sumatran tiger and orangutan.

“We should be thinking generations ahead to ensure that these useful ecosystems are still fully functional in the future,” added Barclay.