A single device can remove 1.5 million kilograms of plastic trash a year, and is to be first deployed in Vietnam. The solar and wind-powered contraption enters a busy market for river debris collectors.

A Singapore-based company is launching a river clean-up system that aims to clean up some of the dirtiest rivers in Asia.

Much of the 10-15 million tonnes of waste that flows into the ocean every year comes from rivers, and Seven Clean Seas, a waterway clean-up and plastic offsetting firm, is set to trial a device that can remove 1.46 million kilograms of plastic trash per year, or 4,000 kg per day.

The River Plastic Recovery System (RPRS) will first be deployed in Vietnam, a country that ranks fourth in the world for marine plastic waste leakage and is home to some of Asia’s most polluted rivers.

RPRS is slated to go live in the fourth quarter of this year, and the trial site for the project will be a river on the Mekong Estuary or the Hong River.

The device, which was designed by London-headquartered naval engineering firm Longitude Engineering, collects plastic trash floating on the surface and channels it from a boom into a central receptor. The plastic is lifted out of the water by a conveyor belt. It can collect larger types of plastic, but not microplastic. It is powered mainly by solar, with some wind power.

You can’t just collect plastic, you need to stop the inflow into rivers as well. It’s a dressing on the wound if you’re not working with the community.

A single unit costs S$300,000, which its backers say is less than half the price of the river-cleaning contraption unveiled by Dutch non-profit The Ocean Cleanup (TOC) in December. TOC aims to deploy a larger river clean-up machine called The Interceptor in 1,000 of the world’s most polluted rivers in just five years. The Interceptor can remove 50,000 kilograms of plastic per day, according to TOC.

Seven Clean Seas says it was able to keep the cost of the RPRS down by using basic kit. The hulls are made from steel box sections, the boom, skip and conveyor are off-the-shelf technologies, which only require minimum modification.

Seven Clean Seas is starting out with a single prototype, which being sponsored by Singapore leisure complex Marina Bay Sands and British insurance firm Howden Group. SCS is working with Vietnamese circular economy strategy consultancy CL2B on managing the plastic collected from the river. 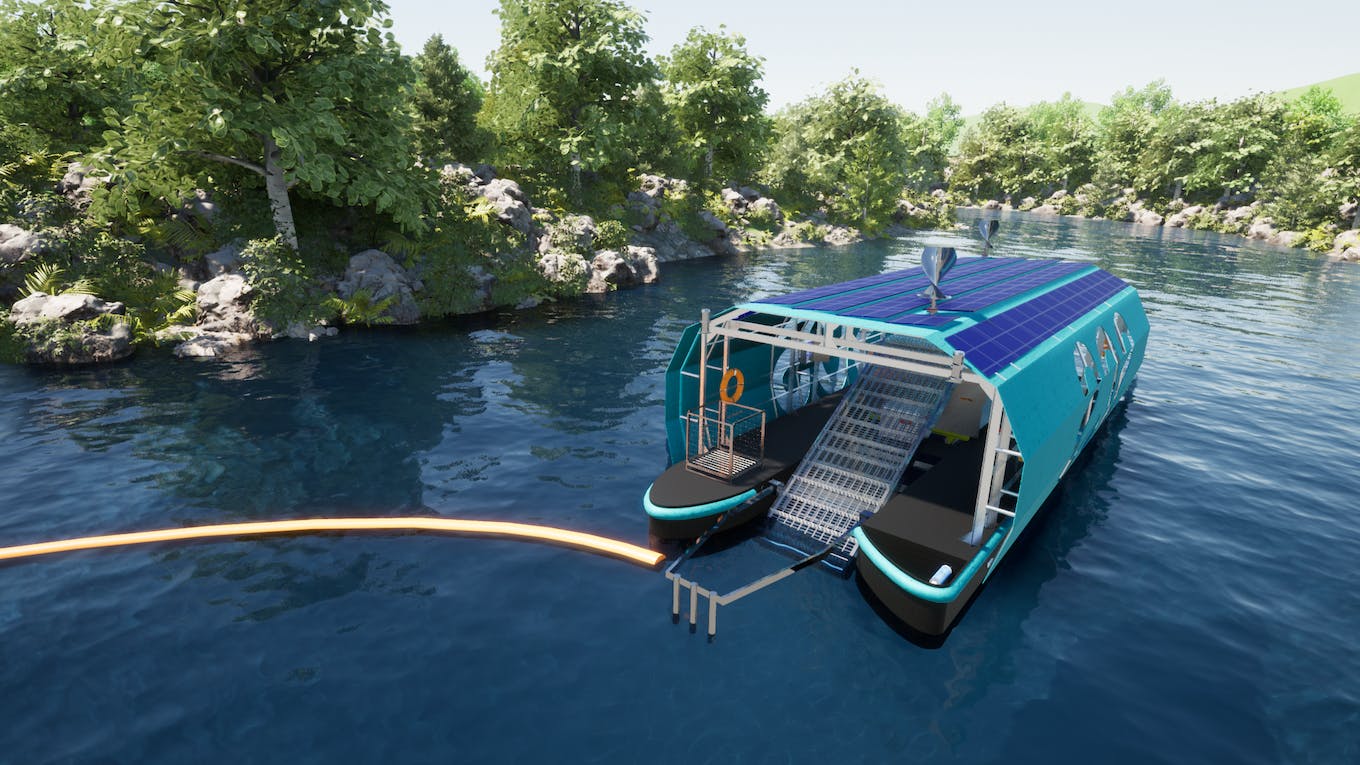 An artist’s impression of the River Plastic Recovery System, which will be powered by solar panels on the roof. Image: Seven Clean Seas

The system will only work if the local community is involved to help stem the flow of garbage into the river, said Tom Peacock-Nazil, founder of Seven Clean Seas.

While Seven Cleas Seas staff will initially work to operate and maintain the machinery and transfer the collected rubbish from the device to the waste management system on land, a local team will be hired to engage with schools and community groups on responsible litter disposal.

“You can’t just collect plastic, you need to stop the inflow into rivers as well. It’s a dressing on the wound if you’re not working with the community,” said Peacock-Nazil.

Seven Clean Seas is working with the University of Birmingham and the Vietnam National University to study the volume, type and flow of plastic in the river.

After Vietnam, Indonesia and Thailand are the target destinations for the river-cleaning device, if it is successful.

River clean-up technologies created a splash late last year when the entrepreneur behind a device called the Waterwheel Powered Trash Interceptor (WPTI) claimed that The Ocean Cleanup had “borrowed heavily” from his design, patented a decade earlier.

John Kellett, founder of Baltimore-based Clearwater Mills, also said that TOC had offered the organisations that his company was working with their solutions to use instead.

Meanwhile, TOC’s The Interceptor has experienced numerous operational challenges, such as clogging and storm damage to the waste barrier in Jakarta where the device was trialled in early 2020.

Peacock-Nazil said that competition in the river clean-up space is no bad thing, as there are more than enough medium and large rivers in the world which could benefit from either his system or The Interceptor.

“Competition is healthy to a degree but we must cooperate to maximise impact, which the whole point of both Seven Clean Seas and The Ocean Cleanup’s existence,” he said.

“As time goes on, both systems will identify certain strengths and weaknesses for particular river profiles, so hopefully we can work together to offer a more holistic solution for the issue or river plastic recovery.”