Five vessels will be built in Klang, Malaysia in the next 12 months. The brainchild of Dutch non-profit The Ocean Cleanup, they aim to stem the flow of trash into the world’s oceans.

Vessels that could sweep up marine trash from 1,000 of the world’s dirtiest rivers will be produced in Klang, Malaysia.

After building the first four of its river clean-up vessels in the Netherlands, Dutch non-profit The Ocean Cleanup announced on Wednesday (10 December) it has partnered with Singapore-based industrial equipment supplier MHE-Demag to scale up production. MHE-Demag is part of the Finland-headquartered Konecranes Group. 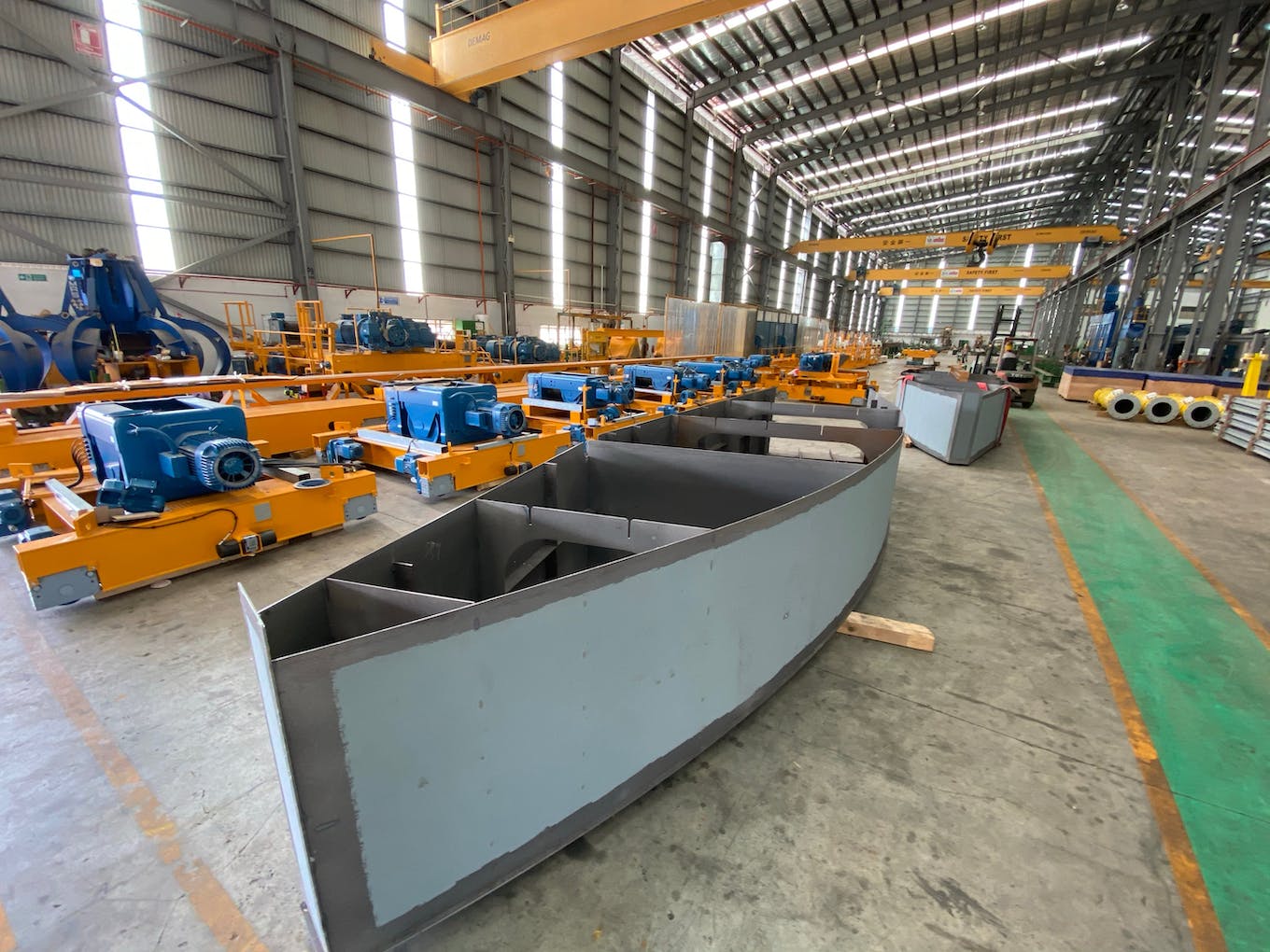 The fifth and sixth Interceptors being built at MHE-Demag’s plant in Klang. Image: MHE-Demag

Two of the vessels, dubbed Interceptors, are now being built at MHE-Demag’s facility in Malaysia and are expected to be completed in May next year. A total of five Interceptors will be built over the next 12 months, said MHE-Demag, which will also maintain the vessels.

The Ocean Cleanup first introduced the solar-powered Interceptors last year. Three are currently deployed at Jakarta’s Cengkarang drain, Malaysia’s Klang river and Santo Domingo in the Dominican Republic, and have extracted sample amounts of plastic so far, said Joost Dubois, The Ocean Cleanup’s head of communications. A fourth vessel is expected to be deployed early next year in Can Tho in Vietnam’s Mekong Delta region.

Rivers are major sources of the plastic waste that end up in oceans and harm marine life. More than eight million tonnes of plastic leaks into the oceans each year and, according to the Ellen MacArthur Foundation, the oceans could contain more plastic than fish, by weight, by 2050.

The Ocean Cleanup aims to deploy its Interceptors at 1,000 of the most polluting rivers in the world, many of which are in Southeast Asia, China and India. The Interceptor uses a floating barrier to guide waste up a conveyor belt onto the vessel. According to The Ocean Cleanup, they can extract 50,000 kilograms of plastic a day but Dubois said this is contingent upon local weather, currents and tides, as well as the density of debris of each river.

Founded by Boyan Slat, The Ocean Cleanup has grabbed headlines for another floating device that aims to collect debris from the oceans—more specifically, the Great Pacific Garbage Patch, a massive accumulation of marine trash in the North Pacific Ocean between Hawaii and California. Last October, the device successfully collected ocean trash for the first time.

The non-profit is currently testing modifications to the design of the device, dubbed System 002, which is set to be deployed in the Great Pacific Garbage Patch next year, said Dubois.

With insights from pilot deployments, The Ocean Cleanup is also making improvements to the Interceptor, a 19.7 metre-long vessel. Those built by MHE-Demag will have upgraded features such as wider conveyors, dumpsters and barges. The conveyor is now 2.5 metres wide, about 1.6 times wider than the previous design, for instance.

“At the end of a very challenging year, I am happy to see series production begin for the Interceptor. This is a necessary step for us to tackle the global flow of plastic pollution to our oceans at scale,” said Slat.