The Philippine government aims to phase out coal plants in its most coal-dependent island group and substitute them with renewable energy facilities.

The Philippine government is planning to convert coal plants into renewable energy power stations in Mindanao as part of the country’s transition to clean energy.

Finance assistant secretary Paola Alvarez said on Wednesday ( 9 June) that the department is now in talks with multi-lateral lender Asian Development Bank (ADB) to initiate a phase-out of coal power generation and determine the scale of resources needed to retire a “meaningful share of coal power in the Philippines”.

“We will acquire all coal-fired plants in the region and repurpose them as we increase renewable energy capacity,” Alvarez told panelists in a virtual roundtable discussion organised by the British Embassy in Manila.

The department of finance later told Eco-Business that the coal-fired power plants will be repurposed to renewable energy projects, but as the study is still in the proposal stage by the ADB, details will not become concrete until the third quarter of this year.

The project will lead to the development of a Coal Replacement fund, which, when established, will acquire coal-fired power plants from current owners, and retire them in a phased manner. 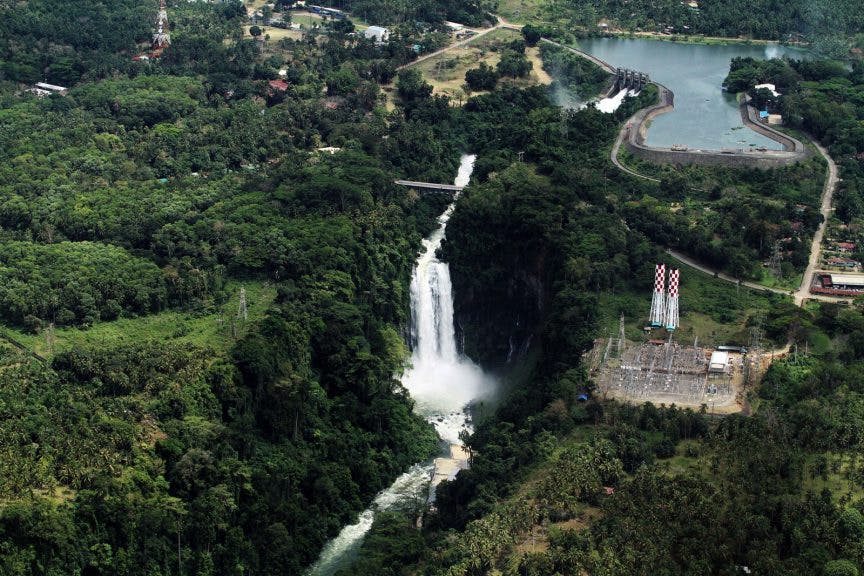 The decades-old Agus-Pulangi hydropower complex in Mindanao.The rehabilitation project is estimated to cost around US$300 billion, according to the World Bank. Image: Philippine Developments Facebook page

This project, Alvarez said, will coincide with their plan together with the department of energy to first improve the generating capacity of the Agus-Pulangi hydropower plant in Mindanao, which has deteriorated due to lack of maintenance over the years.

Alvarez said that the government plans to switch most of Mindanao’s energy requirements to hydropower by “exploring how sustainable finance can be utilised”, in a bid to spur more investments in the region.

The World Bank in April approved a US$700,000 financing agreement to fund the long-delayed rehabilitation of the Agus-Pulangi hydropower plant, claiming that it will reduce Mindanao’s reliance on electricity from coal-fired power plants.

Mindanao, the second largest island in the Philippines, is the most coal-dependent of the archipelago’s three island groups, accounting for 49.4 per cent of installed generating capacity. Renewable energy accounts for 31 per cent of the power generation mix, according to 2020 data from the department of energy. 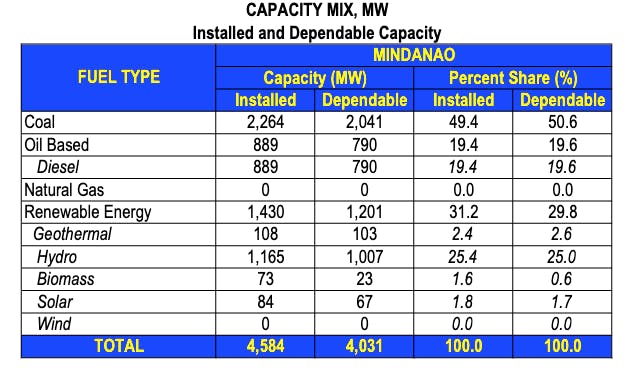 As of December 2020, Mindanao’s power mix accounts for 49.4 per cent of installed generating capacity, making it the most coal-dependent of the archipelago’s three island groups. Image: Department of Energy

“Even if we talk about new coal-fired power plants, there are still negotiable agreements to these contracts. Under the law, you cannot just cancel these [existing coal] contracts without repurcussions. We recognise that it will take some time, that’s why we have until 2030 to meet our nationally determined contribution (NDC) targets,” said Alvarez, a lawyer and the department’s spokesperson.

NDCs are a country’s target to reduce carbon emissions, which is submitted to the United Nations (UN).

The Philippines earlier pledged to reduce its harmful greenhouse gases by 75 per cent by 2030, in line with the Paris Agreement.

While the country is one of the world’s lower carbon emitters with a mere 0.33 per cent of the global emissions total, it is among the most vulnerable to climate change.