Mission 2020 aims to bring a new sense of urgency to the global climate conversation, arguing that global emissions must begin to rapidly decline before 2020. Proponents outline six milestones to achieve this within the next three years.

In April, a new global initiative called Mission 2020 was launched by Christiana Figueres, the former UN climate chief who oversaw the signing of the Paris Agreement on climate change in late 2015.

The aim of Mission 2020 is to bring “new urgency” to the “global climate conversation” with a call to begin “rapidly declining” global greenhouse gas emissions by 2020.

Today, in a co-authored commentary published in the journal Nature, Figueres sets out further details about Mission 2020’s six central calls to action. The commentary is endorsed by 61 signatories, which include climate scientists as well as a range of NGO, religious, political and business leaders.

Change isn’t happening at rate it needs to to meet Paris targets, but it is still possible to do so, so now is our moment to act.

Figueres and colleagues argue that, if global warming is to be limited to between 1.5C and 2C by 2100, global emissions must peak before 2020 and then begin to rapidly decline.

Over the past three years, global CO2 emissions have leveled off, driven in part by large declines in coal use in China and the US. While it is likely too early to say for certain if CO2 emissions have peaked, there is a reason to be cautiously optimistic.

However, peaking global emissions is in many ways the easy part. Scientists say that to stave off potentially dangerous levels of warming later in the century, global emissions need to decline quickly to near-zero.

In the absence of geoengineering or large-scale deployment of negative emission technologies, peaking global emissions after 2020 would provide too little time to transform the global economy.

For example, as the figure below shows, if emissions were to peak in 2025, they would have to decline to zero globally in a mere 10 years. Even a 2020 peak still requires net-zero global emissions 20 years later in 2040. 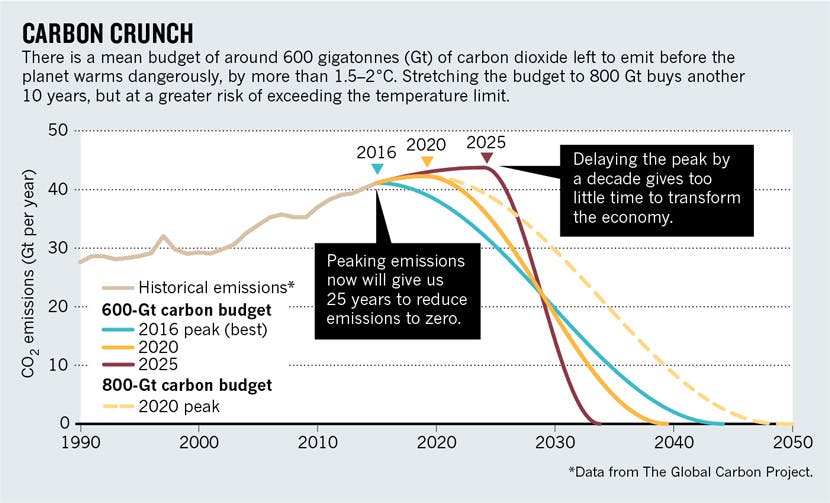 Mission 2020 supporters suggest that the world harnesses the momentum of the Paris Agreement, as well as the current declines in emissions of many countries and the expansion of renewable energy. Specifically, they propose focusing on six milestones across different sectors to achieve significant progress over the next three years:

Energy
Renewables should make up at least 30 per cent of total global electricity generation in 2020, up from 23.7 per cent in 2015. They also propose that no new coal-fired power plants be built anywhere in the world after 2020 and all existing coal plants begin being retired.

Infrastructure
Countries should commit $300bn annually to help cities and states fully decarbonise buildings and infrastructure by 2050, with cities upgrading at least 3 per cent of their building stock to zero- or near-zero emissions structures each year.

Transportation
Electric vehicles should make up at least 15 per cent of new car sales globally, up from around 1 per cent today. They also suggest a doubling of mass-transit utilisation in cities, a 20 per cent increase in fuel efficiencies for heavy-duty vehicles and a 20 per cent decrease in greenhouse-gas emissions from aviation per kilometre travelled.

Land
Enact policies that reduce deforestation and encourage more forest growth. They suggest cutting global deforestation to near zero by 2030 and focusing on agriculture practices that can sequester CO2 in soils.

Industry
Heavy industries should plan to cut emissions in half by 2050.

Finance
Mobilise at least $1tn a year for climate mitigation and adaptation, mostly in the form of private investments, but with some government efforts to help set up “green bonds”.

Additionally, they suggest that a new focus on communication of climate science and mitigation solutions, stressing more accessible approaches than dense, oft-esoteric journal articles. One proposal is for scientific societies and associations to set up communication “boot camps” to help researchers make their science relevant to businesses and policymakers.

Finally, they suggest that optimism be encouraged and that there be more focus on the solutions rather than the problems. They suggest that the upcoming G20 meeting in Hamburg on 7-8 July should take up the goal of rapid transformation by 2020.

Mission 2020’s set of proposals are sweeping and would represent a major ratcheting up of international commitments to tackling climate change. It comes at a time when, paradoxically, the US is withdrawing from the international process, whereas some other countries are more firmly committing to emission reductions.

Some of Mission 2020’s goals, such as ramping up the sale of electric vehicles to 15 per cent of all vehicle sales in the next three years, are likely to very challenging to achieve.

Carbon Brief has reached out to climate scientists and energy researchers to gather their thoughts on the proposal.

Dr Katherine Richardson, professor in biological oceanography at the University of Copenhagen and one of the coauthors of the comment, suggests that:

“The most important point of this commentary is that we are living in an incredibly exciting time in human history. We’ve realised that for our own sake we need to manage our environmental resources at the global level, including the atmospheric garbage dump that we currently use for our greenhouse gas waste.”

“We are actually responding to the climate change challenge. Our energy system changing at dramatic rate, and these changes and also economically viable. But we also need to look at other sectors including food, transportation, finance, buildings and industry. Change isn’t happening at rate it needs to to meet Paris targets, but it is still possible to do so, so now is our moment to act.”

This comment focuses on how can we most cost-effectively speed up the rate of change to meet the Paris climate targets and assure the most prosperous future for our children and grandchildren.”

Prof Dan Kammen, a professor of energy at UC Berkeley and a US State Department science envoy, thinks that the time is right for this sort of proposal:

“I think that the aggressive path and presentation is critically important to emphasise the high costs of delay. The transition that is already underway means we have momentum to do this, at least outside of Washington, DC.”

Dr Glen Peters, a senior researcher at CICERO in Norway, suggests that while the challenge is immense, focusing on communication, ambition and optimism can be useful:

“We have a vanishingly small remaining carbon budget, requiring global emissions to be net-zero within a few decades without the large-scale removal of carbon dioxide from the atmosphere. The mitigation challenge is immense, requiring deep emission cuts in all countries, rich and poor.”

“To get emissions to zero in the space of decades requires an unprecedented technological and behavioural revolution. Powerful incumbents may resist, and so we need smart ways to make the low carbon path irresistible.”

Could those smart ways be tantalising simple? Intriguingly, Figueres and colleagues point to three simple steps: communication, ambition, and optimism.

Communication. While the information deficit model has been debunked multiple times, there are good grounds to revisit the scientific publication model. Social media has transformed communication and the utility of the conventional peer-reviewed publication system may have seen its day.

Ambition. Ambition is necessary, but it should not doggedly lock us on to a wrong path if circumstances change. Ambition only makes sense when it is also achievable.

Optimism. As a scientist, my bones are made of scepticism and I see no point in optimistically walking off a cliff. There is a place for certain people to express optimism, but others have to ensure we can deliver on that optimism.”

Dr Oliver Geden, head of EU division at the German Institute for International and Security Affairs and visiting research fellow at the Institute for Science, Innovation and Society, University of Oxford, provides a more critical take, suggesting that overly focusing on deadlines can potentially be counterproductive:

“This comment is the latest one in the tradition of climate policy wake-up calls that are combined with a particular deadline. It perpetuates a narrative dominant in climate policy for more than 20 years: “It’s five minutes to midnight, time is running out (for 2C), but we can still make it if we start to act now.”

“The problem with this: policymakers and the media indeed notice, but what they hear is not “we really have to start to act now”, but “it has always been five minutes to midnight” (since scientists/activists have always found another way to present just another deadline some years later).”

“This kind of ‘deadline-ism’ would only be a credible strategy if the authors were really willing to declare the game to be over in 2020, in the (probable) case that their ultimative demands are not met. But since many of the comment’s prominent authors have been using the “five minutes to midnight” storyline for so long that this is not to be expected. So politicians can easily call the bluff.

:But since “deadline-ism” is a communication tactic that works very well with mainstream media, articles like this one are damaging the reputation of (scientific) climate policy advice.”

Prof Ken Caldeira, a climate scientist at the Carnegie Institution for Science, argues that while some parts of Mission 2020’s plan might be difficult to feasibly achieve, the ambitious proposal may be helpful in creating a broader consensus for what needs to be done:

“Plans like these are great thought experiments about what may be physically possible. However, such plans become problematic when they are presented as feasible plans of action.”

“It is technically and physically possible for us to end all war today. It is simple. All we need to do is put down our guns and open our hearts. Is calling for everyone to put down their guns and open their hearts today a good thing to do? Probably.”

Is there a rational expectation that people would actually do that? Highly unlikely. Would calling for everyone to put down their guns and open their hearts today help lead to a world where there is less violence? Perhaps.

What becomes clear is that we do not have good methods to assess feasibility and we need to recognise that there are many overlapping flavours of feasibility (e.g., technical, social, economic, political, etc). And we should be thinking about concepts related to feasibility, such as plausibility and practicality, and how these concepts should be applied to evaluating proposals.

Fortunately, for purposes of analysis and understanding, we can have a portfolio of proposals and need not choose among them.

In short, I take an instrumentalist view: A proposal, even if infeasible, is helpful if it helps us to reach good ends. The problem is that infeasible proposals, by proposing the impossible, can frustrate efforts to realise the possible.

In other words, maybe the question we should be asking is whether a proposal is helpful. Is this proposal helpful to developing a broad consensus regarding where we want to get to and how we want to get there?

Unfortunately, given the level of uncertainty in predictions of behavior of large complex social systems, it is difficult to gauge the effect of implausible proposals on future system behavior.”