Ivory by any other name: New study finds that eBay is driving illegal trade

While the study suggests that eBay isn’t doing enough to deter and stop the illegal online trade of ivory, eBay and its NGO partners say they are jointly committed to combating these illicit activities.

Two miniature sculptures sold on eBay in December 2020: a tiny egg with a chick hatching through the shell, and an intricately carved man in traditional Japanese dress with a rat perched on his shoulder.

The egg sold for $195 and the figure for $1,345. But there’s a problem. Both objects are made from a yellowish-white material that has crisscrossing patterns characteristic of elephant ivory — a banned item on eBay.

“Yes, both are elephant ivory,” David Roberts, a wildlife trade expert and academic at Durrell Institute of Conservation and Ecology (DICE) in Kent, UK, told Mongabay in an email after reviewing the listings.

Roberts and his former student, Sofia Venturini, also of DICE, recently published a paper about the ongoing illegal trade of elephant ivory on eBay, despite the online trading platform having a strict policy in place that prohibits the buying and selling of ivory, in line with current CITES regulations.

The study looked specifically at the sale of netsuke, tiny sculptures used in 17th century Japan to weigh down the cord of a kimono robe. While modern netsuke is typically made from synthetic materials, traditional ones are made from elephant ivory — and there is still a small, but profitable, market for these objects. 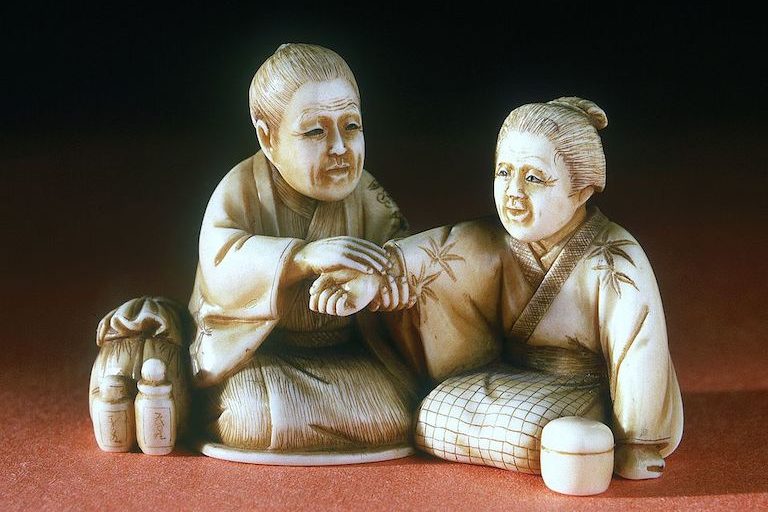 The researchers analysed 3,214 items for sale on eBay in 2018, and found that between 2.2 per cent and 4.5 per cent of them were elephant ivory, despite many of the objects frequently being incorrectly described as cow bone.

Since purchasing the suspected ivory items was “not possible or ethically desirable,” the researchers identified these items as elephant ivory by the presence of Schreger lines, which are described in the paper as “a unique pattern derived from concentric circles that overlap to form a cross-hatched pattern.”

According to the study, eBay only removed between 1.3 per cent and 6.9 per cent of listings selling ivory.

“That was the most surprising part,” Roberts told Mongabay in an interview. “The only time I’ve had success with [ivory listings] being taken down is when I actually ended up tweeting about it.”

“It’s quite easy to find ivory still on eBay even just by typing netsuke,” lead author Venturini told Mongabay in an interview.

“From what I can see, I haven’t seen any progress being done in the past couple of years, and … a lot of the action that these companies take is more reactive rather than proactive. So they do tend to take down postings once they’ve been flagged out, rather than proactively looking for them and putting resources into framing criminals themselves online.” 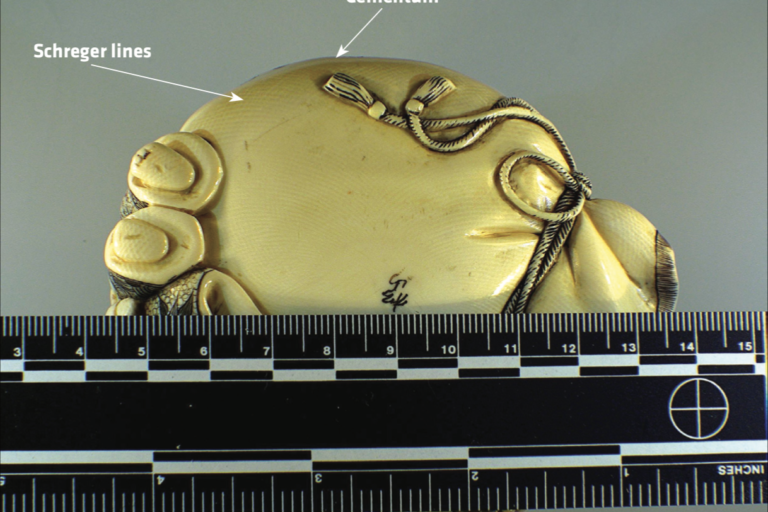 An example of carved elephant ivory and how to identify it. Image: WWF / TRAFFIC.

It’s estimated that about 15,000 African elephants are killed for their ivory each year.

The authors are calling on eBay to do more to increase its efforts to counter the illegal trade on its platform, and to also work more closely with law enforcement agencies.

Tech companies facilitate this trade … and therefore, they need to take responsibility for what occurs on their platforms.

When Mongabay reached out to eBay, a spokesperson responded by saying the company was a founding member of the Coalition to End Wildlife Trafficking Online, a group of 38 e-commerce, search and social media companies and three international NGOs — WWF, TRAFFIC, and the International Fund for Animal Welfare (IFAW) — that have committed to fighting wildlife trafficking.

“We have been working to tackle the illegal trade in elephant ivory on the platform for many years, and work alongside WWF and IFAW to continually update our measures,” the spokesperson said. “We have global teams dedicated to upholding standards on our marketplace, and over a recent two year period we blocked or removed over 265,000 listings prohibited under our animal products policy.”

“It’s important to flag that the data from the study referenced was from 2018, and that a lot has changed online since then,” Grein told Mongabay in an emailed statement.

“For example, social media platforms are now the primary source for trading in illegal wildlife and their products, not e-commerce sites. Given the nature of illegal trade, sellers are constantly deleting and recreating accounts and profiles across the internet. Consequently, companies are constantly having to respond to changing search terms and methodologies, as well as a growing number of online users globally.”

In August 2020, WWF, TRAFFIC, the US Fish and Wildlife Service, and the CITES Secretariat released a guide to help businesses, governments and law enforcement agencies to easily identify ivory, which can sometimes be difficult to differentiate from other materials such as vegetable-based ivory, resin or bone.

“Even with the efforts of ecommerce companies to prevent [illegal online trade], it is a constant battle, and illegal ivory trade is increasingly found online, especially due Covid lockdowns, market closure and monitoring in the key demand market countries,” Crawford Allan, senior director for TRAFFIC at WWF and editor of the guide, told Mongabay in an emailed statement.

“Law enforcement has an overwhelming task to detect illegal ivory among so many postings online. That is why organisations like WWF and TRAFFIC are investing in ongoing online investigations and big data analytics to boost the efforts of both law enforcement and online companies and it is making a difference impacting criminal profits.”