Is there a market-based solution to Southeast Asia’s haze problem?

A cap-and-trade system helped to eradicate acid rain in the 1990s. Could Southeast Asia's haze problem be beaten in the same way? American Financial Exchange chief Richard Sandor thinks so.

Acid rain was a major environmental problem in the 1970s and 1980s. The phenomenon was caused by the reaction of sulphur dioxide and nitrogen oxide from power factories with moisture in the atmosphere to generate acid, which fell onto earth as rain, poisoning lakes and destroying forests.

The situation began to improve in 1990 when the United States government and economists introduced a cap-and-trade system for power producers, which put in place a cap on permitted emissions and enabled companies to trade leftover allowances, said Richard Sandor, chairman and chief executive officer of the American Financial Exchange, an electronic exchange for financial institutions.

Sandor, who played a key role in orchestrating the cap-and-trade scheme to tackle acid rain, was speaking at a lecture organised by the National University of Singapore in the Southeast Asian city-state.

“The idea was to put a cap on the amount of emissions nationally, and then lower the cap over a period of time,” he said. There was outcry that electricity prices would skyrocket, America’s competitiveness would be hurt, and power-producing states such as Ohio or Illinois would go bankrupt.

Instead, a decade after the first cap-and-trade programme was implemented, emissions were down to around 4 million tonnes from a high of 18 million in the 1980s.

“Electricity prices went down. The cost to the US economy was $1.2 billion, but there was an annual reduction of $123 billion in medical expenses associated with lung diseases,” said Sandor, who is also known as the “father of carbon trading” for his work on carbon markets around the world. “That does not include 37,000 lives a year saved nor the restoration of rivers.”

Also known as the haze, it is caused by forests fires in Indonesia as land is cleared for palm oil plantations, said Koh.

Sandor offered two pieces of advice: to create a regional solution and to put a price on pollution.

Drawing from the example of acid rain, he said that the creation of local laws to regulate emissions from coal-fired plants resulted in utilities companies building taller smokestacks so that emissions would blow into another state where the regulations didn’t apply.

“We thought of sulphur dioxide as a local problem, but it was as regional as [the haze] in Southeast Asia. It requires a regional agreement because local command and control, where there are externalities involved, just doesn’t work,” Sandor said.

When told that Asean—a political bloc of 10 Southeast Asian countries—already has an agreement to combat the haze, Sandor said pricing could be another solution.

Cap-and-trade markets work because companies find that it pays to pollute. “The question is, how do people get paid not to pollute?” he said. If polluters realise they could make money from cutting emissions—by selling leftover emission quotas, in the example of acid rain—they would do it.

Blockchain for the masses

Sandor was optimistic about the future of blockchain-based market trading, which could also empower small producers to access bigger markets. There has been a lot of hype and speculation around cryptocurrencies, which are digital tokens whose transactions are recorded on the digital open ledger that is blockchain technology, he said.

But the underlying blockchain technology is much more impactful as it can be used to facilitate trade in clean energy, as seen in South Africa’s Sun Exchange platform or WePower from Lithuania, Sandor explained. 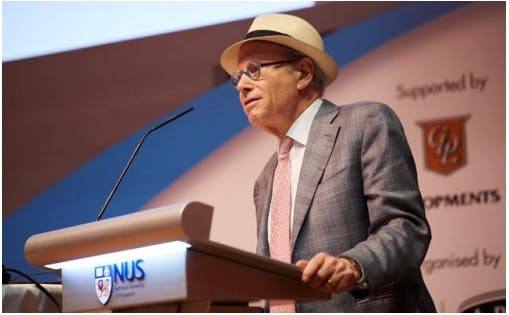 Recalling his work in Kerala state in Southern India in 2007, Sandor said he and the Chicago Climate Exchange partnered a non-governmental organisation to encourage farmers to collect manure and process it using biodigestors. The methane produced was used for household cooking, and the carbon credits produced sold on the Exchange to provide additional income.

But a key obstacle was the need to travel to these remote villages to verify the carbon offsets were indeed being made, noted Sandor.

Farmers who have mobile phones can record information about their crops and sustainability certification credentials on the blockchain, and take advantage of that transparency to connect with larger, international markets, said Sandor. “This is a way for an Indian farmer with a small plot of land to—because the information is recorded—be a supplier to Walmart that could never be without this technology.”

He added: “The message is: embrace change, don’t be bothered by blockchain, it’s no different to the cellphone or CNN. It’s information.”