Is Asia high on hydrogen?

Green hydrogen was one of the hottest topics that dominated regional energy dialogues this week. Bets are on bringing it into the energy mix in Asia, despite it lacking commercial viability.

Judging from how often the H-word came up during this week’s marathon dialogues held to discuss the energy transition in Asia, it is clear that hydrogen is having its big moment.

Even as players in the region acknowledge that it might take some time before their investments in low-carbon hydrogen pay off, many are pinning their hopes on the hydrogen economy redrawing the energy map of tomorrow.

At two separate conferences this week, high-level representatives from energy institutes based in Japan and Australia were especially bullish on the prospects of hydrogen. Both countries are leading the charge in Asia to roll out technological solutions to promote the alternative fuel as part of their energy transition strategies.

Australia’s energy institutes are now focused on helping the island continent build a renewable hydrogen industry, said Miranda Taylor, chief executive of NERA (top right in picture) at the recent EIC-APAC Energy Conversations. NERA is also working with authorities to ensure that the decommissioning of coal in Asia is up to standard. [Click to enlarge] Source: GE Gas Power

NERA is a non-profit working to support the island continent’s energy transition, by coordinating the provision of seed funding for companies and innovators. “Within the industry, we all know that the hydrogen story is a complex one. It is also an ‘unproven’ story, because there are doubts about how clean the fuel will finally be. Nonetheless, considerable investments in hydrogen are pouring in,” she said.

Professor Tatsuya Terazawa, chairman and chief executive of Japan’s Institute of Energy Economics, similarly believes that green hydrogen - hydrogen generated from renewables -  is the answer if Asia is seeking a “pragmatic approach”.

Not cheap nor lucrative yet

The region, unfortunately, cannot enjoy the growth potential of solar and wind power, due to its land and weather limitations, said Terazawa, at a Singapore International Energy Week (SIEW) dialogue session on Monday. “There are also no transmission lines connecting Asia with regions rich in these renewables. But we can innovate and find a way to lower the costs of transporting hydrogen and it will alter the calculus of the energy transition in Asia,” he said.

It remains unclear how clean or lucrative hydrogen can be. Hydrogen has been the promised fuel of the future since the 1970s but there have been many false starts in the past decade. More than 95 per cent of the hydrogen used today, commonly known as ‘grey hydrogen’, is extracted from natural gas. The process of manufacturing hydrogen involves electrolysing water to separate hydrogen atoms from oxygen and is hugely water and energy-intensive. 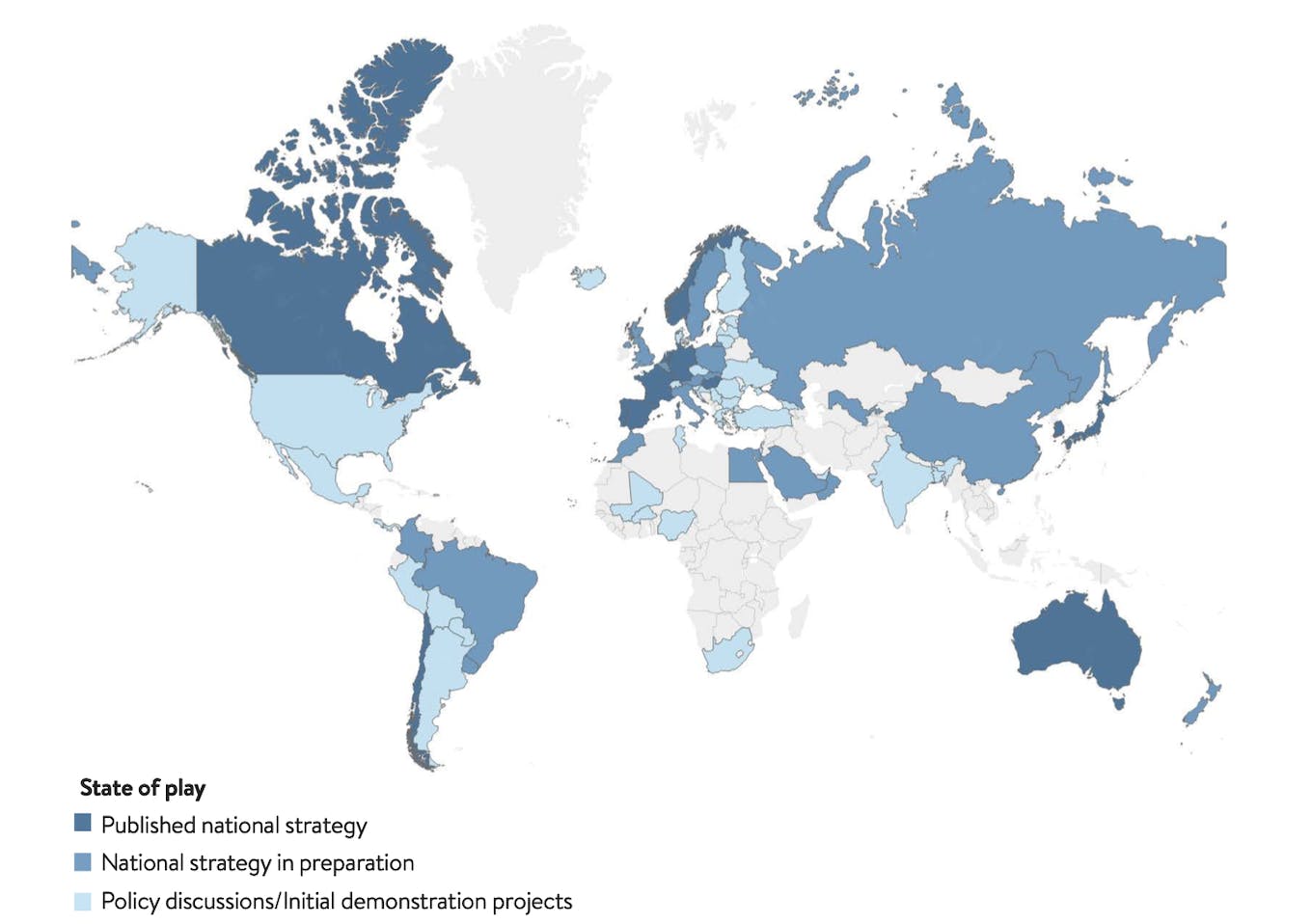 An overview map of where different countries are at developing a hydrogen strategy. Investment in hydrogen production projects worldwide is increasing and the number of countries that already have strategies for the use of the fuel has increased from just three in 2019 to 17 today. Image: World Energies Council

Over the past few years, the industry has been turning to low-carbon energy sources such as renewables and nuclear power to extract hydrogen, but it is still prohibitively expensive. Within the region, countries like Singapore are opting to develop subsea cables to import renewable energy from its neighbours, rather than hedge bets on hydrogen.

The International Energy Agency (IEA), in the Global Hydrogen Review, its new annual publication focused on tracking progress in hydrogen production and demand, estimates that putting the hydrogen sector on a path consistent with global net zero emissions by 2050 requires US$1.2 trillion in investments by 2030.

To curb climate change, about US$90 billion of public money needs to be channelled into clean energy innovation worldwide as quickly as possible - with around half of it dedicated to hydrogen-related technology, the report said.

Within the industry, we all know that the hydrogen story is a complex one. It is also an ‘unproven’ story, because there are doubts about how clean the fuel will finally be.

In Asia, Japan is spearheading the Hydrogen Energy Ministerial (HEM) meeting, a multilateral initiative organised to create consensus on hydrogen-related collaborations. According to the Institute of Energy Economics, for the region to realise net-zero carbon emissions by 2050, annual costs could go up to 2.9 per cent of each country’s gross domestic product (GDP).

“It is difficult to get a region that is the growth centre of the world to give up on growth,” said Terazawa.

Japan is banking on transforming hydrogen into ammonia to make it much less expensive to carry in the absence of transmission pipelines, and Terazawa thinks it is the right way forward. To transport hydrogen as a liquid, it needs to be cooled to a temperature of -252 °C, while ammonia can be carried as a liquid at just -33 °C, explained Terazawa.

“It will be the cheapest option for Asia if it wants to decarbonise,” he said.

Where will the gold rush lead to?

Referring to Malaysia’s energy ministry’s announcement this week that it will limit renewable energy exports to Singapore, Andrew Bedford, director of energy transition at US-based consultancy Jacobs, said that governments in Asia are feeling the heat to meet their net-zero targets. This might fuel a more nationalistic mindset when it comes to the way they think about renewables and energy, he said.

“At the same time, it means that [countries that used to be] major energy importers now have an opportunity to invest in emerging areas of opportunities, diversify their energy mix and own a share of a new market,” said Bedford.

Describing the surge of investments in hydrogen-related infrastructure as a “green gold rush”, Bedford said that bigger players are now snapping up “the best areas of land” that are suited to such development. 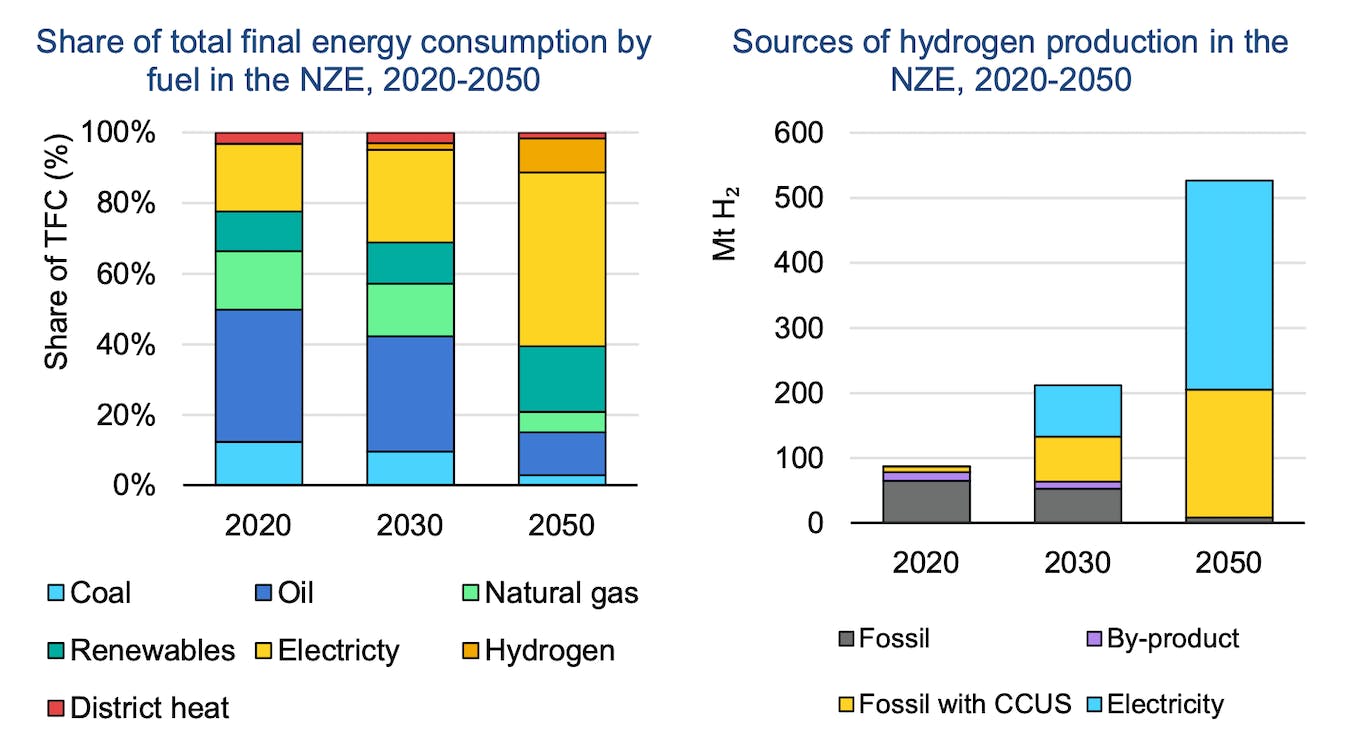 The International Energy Agency (IEA) projects that hydrogen will become an important part of the Net-Zero Emissions (NZE) scenario, though the fuel forms only one part of the puzzle. [Click to enlarge] Image: IEA

In terms of coming up with comprehensive hydrogen plans, Southeast Asia still has a lot of catching up to do, said Bedford. The number of countries with hydrogen strategies has increased from just three in 2019 to 17 today, but none are from the region.

Singapore is working on one right now, though it is also taking a cautious approach in doing so. The island state announced on Monday that it will be awarding S$55 million to research projects that are focused on improving the technical and economic feasibility of low-carbon technologies, particularly hydrogen and carbon capture, utilisation and storage (CCUS), to enable local deployment in the future.

By 2035, Singapore aims to import up to 30 per cent of its power supply by 2035 in a bid to diversify the gas-dependent nation’s energy mix with renewables.

Minister for Trade and Industry Gan Kim Yong, delivering a speech at SIEW, spoke about low-carbon hydrogen’s potential to “be a game-changer for Singapore’s energy transition”. 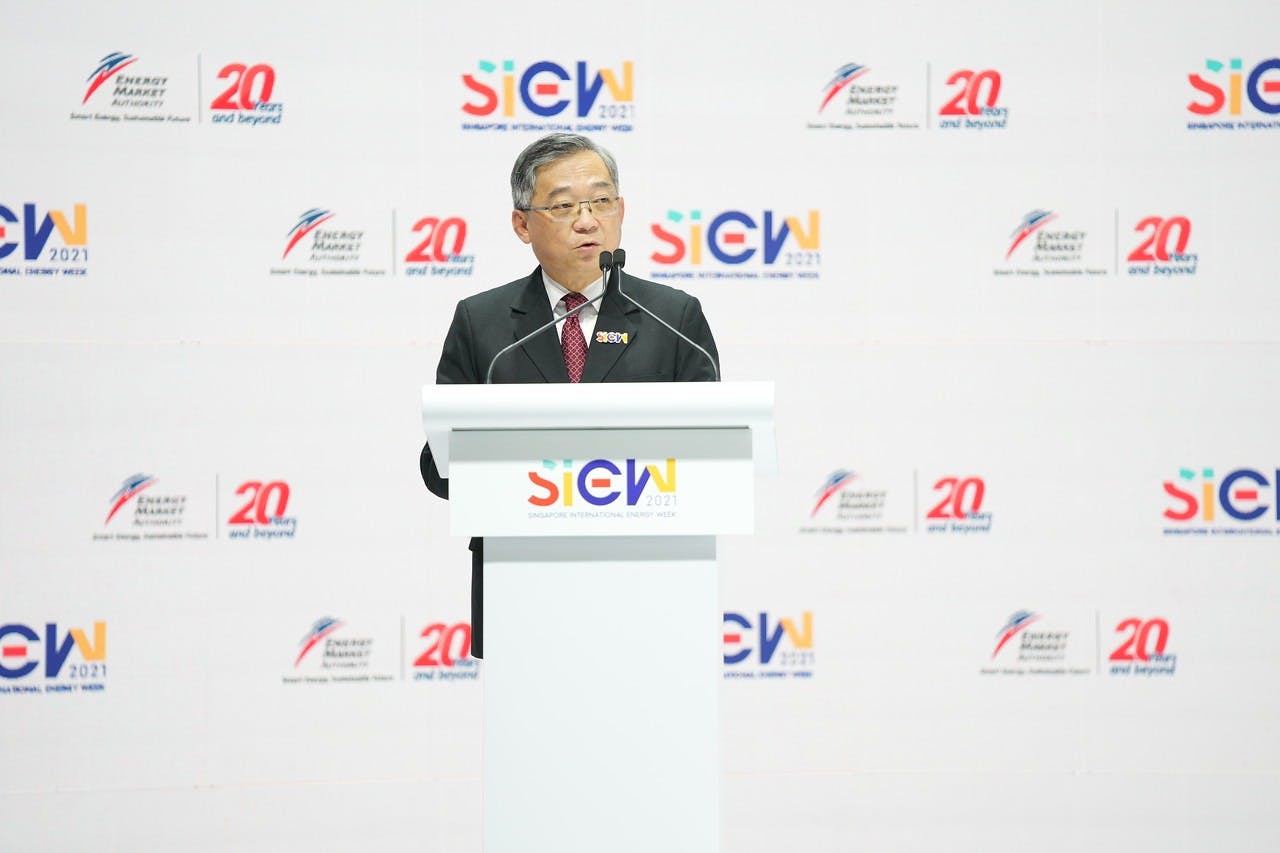 Speaking at the opening of Singapore International Energy Week (SIEW), Minister for Trade and Industry Gan Kim Yong said that the move to import low-carbon energy will be a “key needle mover” in Singapore’s energy transition in the near to medium term. Image: SIEW

For hydrogen to be deployed meaningfully, especially for the power sector, global supply chains and proper infrastructure for hydrogen need to be established and the costs of hydrogen transport, storage and use need to be competitive, said Gan.

Experts at the energy dialogues said that while the viability of green hydrogen is being hammered out, gas is likely to play a role as a bridging fuel in the region’s energy transition.

Shantanu Som, engineering director for GE Gas Power, advocates for a more measured approach. “Companies are getting mixed signals on where they should be headed for. On one hand, Australia is aspiring to be the hydrogen hub for Asia and the government is taking very bold steps. On the other hand, you have China, which has a five-year plan but is just putting small stepping stones in-between in a very cautious manner,” he said.

China’s new road map, launched on Tuesday, pledged to hit peak greenhouse gas emissions by the end of the decade but stopped short of firm commitments to reduce reliance on coal.

When leaders gather at the COP26 summit in Glasgow this weekend, hydrogen is unlikely to prominently feature on their discussion agenda. The world needs to work on phasing out coal first, said energy experts.

Organisations working with authorities on pushing for the energy transition will need to have the capacity to make sure that coal decommissioning is done to the highest standards, said Taylor.

“The Asia-Pacific region, including Australia, has a considerable amount of offshore oil and gas infrastructure, which will need to be decommissioned or repurposed in the next decades. For a just transition to happen, we have to be realistic and make sure that workers are retrained, that they will be equipped with different skills and capabilities to work in a different industry,” she said.