A new report by global energy watchdog IEA projects fossil fuel use to peak by 2025, but warns that clean energy investment needs to increase as part of the rebound in global energy spending post-pandemic to avert a climate catastrophe.

A new energy economy might be in sight, as the global use of fossil fuels is now expected to peak by the mid-2020s if countries meet their climate pledges, said a new report published by the International Energy Agency (IEA) on Wednesday.

Released a fortnight ahead of COP26, a major United Nations climate summit in Glasgow, Scotland, where world leaders will gather to discuss how to accelerate the shift away from fossil fuels, the IEA’s annual World Energy Outlook has projected that global carbon emissions will also reach a peak by 2025, dropping slowly in the decades after.

It is the first time the agency is seeing oil demand peak in all its base scenarios. In its report, it cautiously predicts that there might be a turning point in curbing climate change over the next few years, although governments need to immediately take stronger action to reduce their carbon emissions.

The 368-page report from the Paris-based body finds that a substantial gain in coal and oil consumption this year has pushed carbon dioxide emissions towards their second largest annual increase in history. Coal-fired power has helped some of Asia’s biggest economies, namely China and India, judder back to life following several rounds with the Covid-19 pandemic.

“Every data point showing the speed of change in energy can be countered by another showing the stubbornness of the status quo,” the IEA warned. The agency noted that significant strides have been made in the fight against climate change with wind, solar and other clean technologies taking off, but current energy policies will still put the world on track to heat up roughly 2.6°C by 2100 compared to pre-industrial levels.

“There is an investment gap when it comes to renewables,” the IEA said.

Fatih Birol, the agency’s executive director, in his analysis of the projections, said that energy market volatility will continue to present a risk unless investment in clean power is tripled in the next decade.

“The world’s hugely encouraging clean energy momentum is running up against the stubborn incumbency of fossil fuels in our energy system,” he said. “Governments need to resolve this at COP26 by giving a clear and unmistakable signal that they are committed to rapidly scaling up the clean and resilient technologies of the future.”

He also urged negotiators not to let the current energy crunch affect their decision-making. In recent weeks, power prices surged to record levels as coal and natural gas prices hit multi-level highs and widespread energy shortages engulfed Asia, Europe and the United States. India and China have been hit with coal shortages, with both nations resorting to rationing power supply to ease constraints. 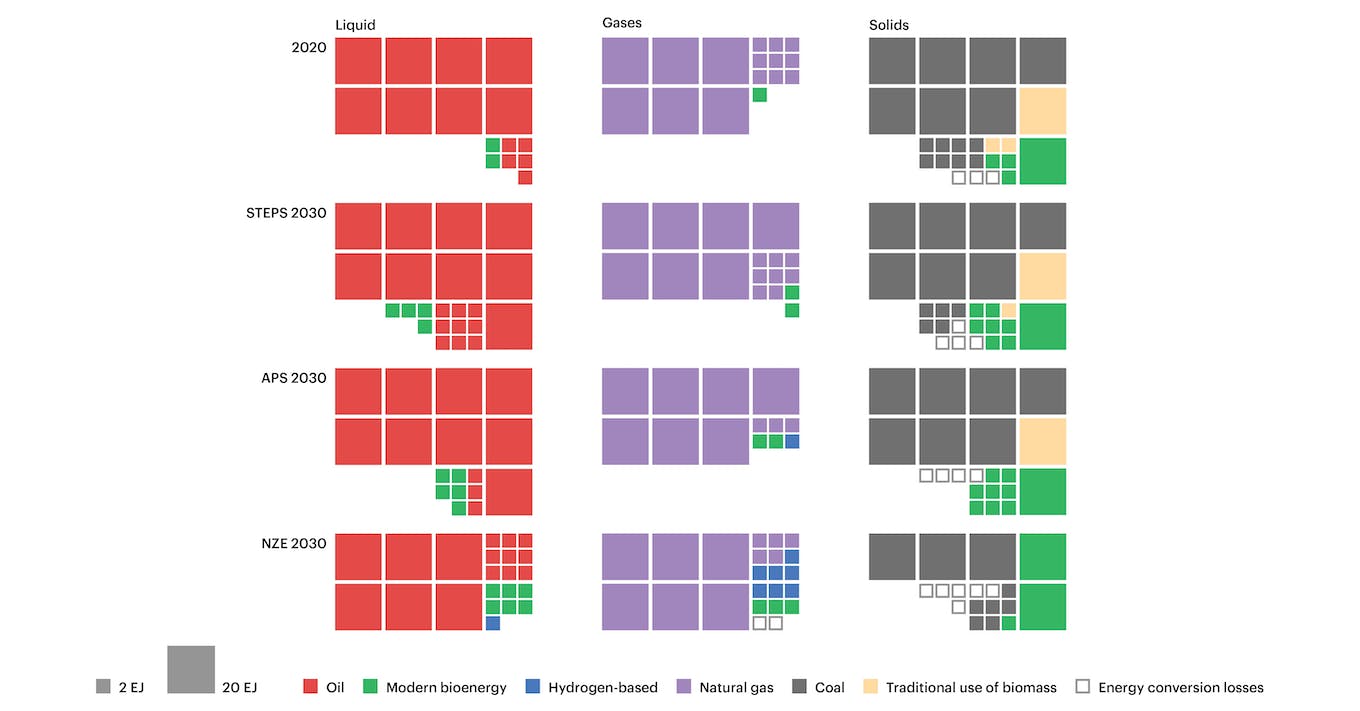 There is a rising share of low emission fuels in the energy mix, says the IEA in its World Energy Outlook 2021 report [click to enlarge]. Image: International Energy Agency

Under the IEA’s projections, even if current net zero pledges by governments around the world are implemented in full and on time, the world will only achieve 20 per cent of the emissions cuts by 2030 needed to keep the goal of net zero emissions by 2050 a possibility. Under this scenario, global average temperatures would rise by 2.1°C above pre-industrial levels by 2100, far higher than the target of an ideal limit of 1.5°C laid out in the 2015 Paris Agreement, said the IEA.

Clean energy investments going to emerging countries will need to be rapidly deployed, the IEA said in its report. Currently, 20 per cent of investments in clean energy are in these markets and it is also in developing economies where the bulk of existing coal assets are located.

China, the world’s largest emitter of greenhouse gases, recently announced that it would stop financing new coal plants overseas. However, the IEA noted in its report that within China, although 20 gigawatts of coal power has been retired over the past decade through administrative orders as authorities sought to curb inefficient plants and improve local air quality, recent closures have been modest in scale.

It suggested that efforts to separate out coal assets into new financing and ownership structures can help support transitions in markets where a strong relationship exists between the energy sector and the government.

The report also pointed out that the extra investment to reach net zero by 2050 is less burdensome than it might appear. “More than 40 per cent of the required emissions reductions would come from measures that pay for themselves. This includes improving efficiency, limiting gas leakage and installing wind or solar in places where they are now the most competitive electricity generation technologies.”