The organisers of the Singapore Climate Rally movement want advocacy to go beyond caring about the planet. Overlapping issues of justice, such as the welfare of migrant workers and other marginalised communities, are at the heart of this year’s rally.

The youth organisers of the Singapore Climate Rally have unveiled the movement’s line-up of speakers for its second-ever rally. The event, to be held virtually this weekend due to Covid-19 restrictions, will see a more diverse panel of activists, politicians and community workers aligned with a variety of causes, such as migrant workers’ rights and housing security for the low-income.

This year’s speakers include Zakir Hossain Khokan, a migrant worker from Bangladesh and founder of ‘Migrant Writers of Singapore’, Firdaus Sani, a fourth-generation descendant of the ‘Orang Laut’ or ‘sea people’ community in Singapore, K Karthikeyan, veteran unionist and executive secretary of the United Workers of Petroleum Industry (UWPI), and Marlina, a volunteer working in a rental flat neighbourhood. The theme of the rally is ‘The People in Crisis’.

Organiser Tan Heng Yeng said that the mainstream approach in Singapore is to view climate change as an isolated problem, rather than one that intersects with a myriad of other socio-political issues. The 26-year-old arts programmer hopes that with this year’s rally following hot on the heels of the landmark COP26 climate conference in Glasgow, more people can see that the climate crisis has immediate impacts on ordinary people everywhere.

“As we have seen with the onslaught of public health and financial crises in recent times, it is the most marginalised and disempowered sections of the world’s population who suffer the most when a crisis hits, even if they contributed the least to causing it,” Tan said. “The climate crisis is no exception. The transition to clean and green energy must be fair to all.”

Tan told Eco-Business that inviting a range of interests to this year’s rally is a strategic one. “We cannot have a victorious climate movement without the buy-in of the people. Environmentalists must find ways to relate and connect with different constituencies to successfully work towards the green transition necessary for the survival of all,” she said.

These include workers who are exposed to the outdoors and residents living in cramped rental housing, whom many think are not connected to the climate crisis, but are actually affected in their everyday lives due to related impacts such as extreme heat.

Tan said that having a unionist representing workers from the petroleum industry speak about the green transition is important too. “The UWPI’s stance on the climate crisis could be significant, given that its branches include energy companies such as BP and Chevron, some of the biggest polluters in the world,” she said.

We cannot have a victorious climate movement without the buy-in of the people. Environmentalists must find ways to relate and connect with different constituencies to successfully work towards the green transition necessary for the survival of all.

Realising that there is strength in numbers, activists are increasingly applying intersectional environmentalism to their approach. Intersectionality was originally coined about 30 years ago to help us understand how race, class, gender and other individual characteristics “intersect” with one another. The idea, has taken root in global climate and environmental movements, which now hold overlapping issues of justice at the heart of their organising and activism work.

At the recent COP26, it has brought about enhanced scrutiny of the race and gender representation of participants at the conference, and shone a spotlight on the climate finance that is lacking from wealthy countries to help marginalised communities in under-developed places deal with the impacts of climate change.

Intersectionality is also starting to influence how youth environmental groups in Asia frame their messages while advocating for climate action.

In the Philippines, there are now calls from youth environmentalists to “decolonise climate activism”, in a bid to focus conversations on racism and the plight of indigeneous communities affected by the impact of climate change. Citizens in the Philippines suffer some of the most extreme weather conditions in the world, facing an average of 20 typhoons a year. They are also affected by rules and legislations that limit almost all forms of activism and protest.

In an interview earlier this year, Mitzi Jonelle Tan, a climate justice activist based in Manila and an organiser with Fridays For Future, a global climate movement initiated by campaigner Greta Thunberg, said that activists in Asia should not ignore the fact that the climate movement is a very Euro-centric one and rehash messages from the West.

“When speaking at panels, I always try to remind people that even though I have been impacted by the climate crisis, it is still largely a privileged story that I am sharing because many others have it worse,” she said. “In the Philippines, it is hard to get the indigenous people or representatives of these communities to attend events because of safety considerations, so activists need to try our best to consult with them and let their voices be heard.”

Liyana Dhamirah, an active advocate for the lower-income and underprivileged families, who will be speaking at the upcoming Singapore Climate Rally, said that there are street sleepers in Singapore who are vulnerable to the increasing heat and erratic thunderstorms brought about by the changing climate, since they do not have a reliable, safe accommodation nor access to air-conditioning.

“As someone who has been homeless before, I understand that issues of housing insecurity and income inequality are deeply interconnected with the climate crisis. It is unfair that lower-income families bear the brunt of climate change, especially when their carbon footprint is negligible compared to the carbon emissions generated by wealthier households and corporations,” she said. Dhamirah will be sharing her ideas about how Singaporeans should ensure that vulnerable communities are well-protected, while combating the impacts of climate change.

‘Being an ally’ for other causes

Over the past year, the Singapore Climate Rally movement has issued statements to express solidarity and support for other causes. Last month, it released a clemency statement for Nagaenthran K. Dharmalingam, a Malaysian drug trafficker who has been on Singapore’s death row for more than 10 years and was scheduled to be hanged last month. Malaysian authorities and human rights groups had called for a delay in the execution of Dharmalingam who has limited mental capacity, but the Singapore courts had previously ruled against that.

Dharmalingam’s execution was later stayed by the Court of Appeal, after he tested positive for Covid-19. 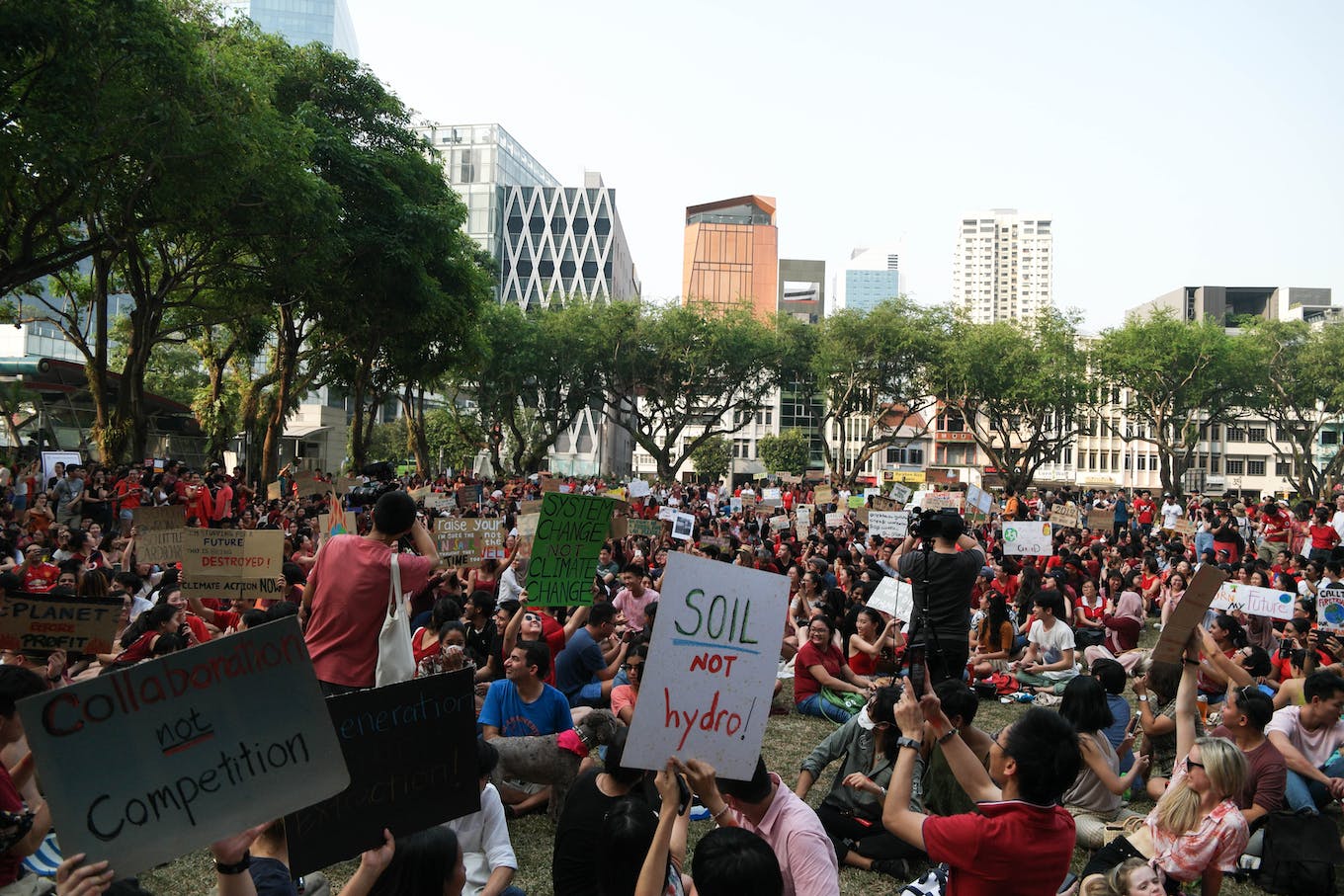 In its statement, the Singapore Climate Rally said that the death penalty, like the climate crisis, disproportionately impacts marginalised communities and it is incumbent on environmentalists to also recognise these inequalities and try to reduce them. Its organisers told Eco-Business that they see the death penalty as anti-life and at odds with “the kind of regenerative society we are building towards”, one that sees the possibility of repairing harm rather than being limited to punitive approaches.

“There are no less than 50 people on death row in Singapore today, many of whom are minorities from low income brackets. Names like Nagaenthran K Dharmalingam and Syed Suhail Syed Zin are telling of the communities from which death row inmates are disproportionately drawn,” said the statement.

The movement has also spoken up for individuals who perform care work during the Covid-19 crisis, such as nurses and doctors and people who work in the childcare, education and cleaning sector.

“These jobs are low carbon work that do not create new waste or extract from the land and there will be higher demand for it in the future due to climate change…we can move towards a future where care work is valued more, where its workers have better work conditions and where its benefits are distributed more equitably,” said organisers of the Singapore Climate Rally through its social media channels.

On getting their message of intersectional environmentalism across to the wider public, the organisers told Eco-Business that there is still the challenge of engaging with older generations who do not see themselves as “environmentalists”, though it is precisely due to the traditional framing of the climate crisis as purely an “ecological issue” that creates this rift.

“It alienates the older generation who may be more concerned with the social and economic cost of the climate crisis. Ultimately, what we are trying to do is very simple - to connect and relate the climate crisis to the majority of people who are affected by it. It is when we see that the crisis affects everyone’s ‘bread and butter’ that the movement can unify across generations.”

The first Singapore Climate Rally was held at Hong Lim Park in 2019. It attracted over 2,000 people. Its organisers said in a press release that the rally was key to putting climate action on the agenda of political parties in the run-up to Singapore’s General Elections in 2020. The organisers have extended invitations to both the ruling and opposition parties for this year’s rally.

The event will also feature speakers from other youth environmental groups such as LepakInSG and NTUDivest, to show how their work intersects with other areas of advocacy work. These youth-focused organisations petitioned the government as a collective last month, calling for it to make pledges to reduce the city-state’s greenhouse gas emissions in line with global climate targets and take bolder measures to stem biodiversity loss at home, prior to the COP26 summit.

The Singapore Climate Rally will take place on Zoom this Sunday (5 Dec) from 3pm and the event will be livestreamed on Facebook. Those interested to participate can find out more details from the event page.