Indigenous people have long been marginalised worldwide. To boost their livelihoods and save Borneo's remaining forests, an indigenous-led organisation in Malaysia has been providing communities with green power for nearly two decades.

For the villagers of Kampung Buayan, it used to be easy to forget how close the city of Kota Kinabalu was. Without access to electricity, life in a small indigenous community tucked away deep in Borneo’s rainforest could feel far removed from the bustling markets and gleaming hotels in the capital of Malaysia’s Sabah state, just 20 kilometres away as the crow flies.

Then, 12 years ago, an opportunity came along for the Dusun tribe to embrace some of the comforts of modern life while preserving its traditions, culture, and forest.

An indigenous-led non-profit group that develops sustainable alternatives for rural electrification offered to install a micro-hydro system in the village. The project not only sought to support the community’s efforts to forge its own development path, but also to make a critical contribution to the protection of some of Borneo’s most fragile ecosystems.

Electricity is a catalyst for development.

Kampung Buayan is one of about 40 small-scale hydro ventures that Tonibung—or Friends of Village Development—has completed across Malaysian Borneo and Peninsular Malaysia to bring clean power to indigenous villages that are too remote to benefit from the government’s electrification push.

The organisation, whose work is funded through conservation grants, has gone to great lengths to serve these tribes, often travelling on abandoned logging roads, churning rivers, and even by air to reach them. But Tonibung’s work goes far beyond mere rural development, its founder, Adrian Banie Lasimbang, tells Eco-Business.

“We want to advocate for native rights to self-determination and empower indigenous groups to choose the kind of development that meets the aspirations of their people,” the indigenous activist says. “Providing villages with their own renewable energy system is a crucial step, but there are still many challenges facing indigenous people that we need to address.”

One of these challenges is the lack of income. While still striving to be largely self-sufficient, most of Borneo’s indigenous groups have long recognised that money is needed to send children off to school or buy goods they can’t make themselves. Scarce employment opportunities in rural areas have prompted many young people to leave, sparking concerns over cultural erosion.

“Indigenous people have long been marginalised. Despite Malaysia’s rapid development, access to education, clean water, and energy have been key issues, and although there has been improvement over the years, electrification in last-mile communities remains an issue,” says Lasimbang, who stepped down as Tonibung’s executive director in 2018 to become a senator for the Malaysian government, representing the state of Sabah. He now supports the group as a technical advisor.

If we protect indigenous communities, we also protect forests and the climate.

Access to electricity both enhances indigenous communities’ quality of life and boosts existing livelihoods, he explains. It can power refrigerators, enabling villagers to sell fish and produce at the market. Men can use modern woodworking equipment, allowing them to conserve natural resources and build better boats, furniture, and houses. After sunset, electric light enables children to study and women to create traditional beadwork or weave. “Electricity is a catalyst for development,” says Lasimbang. 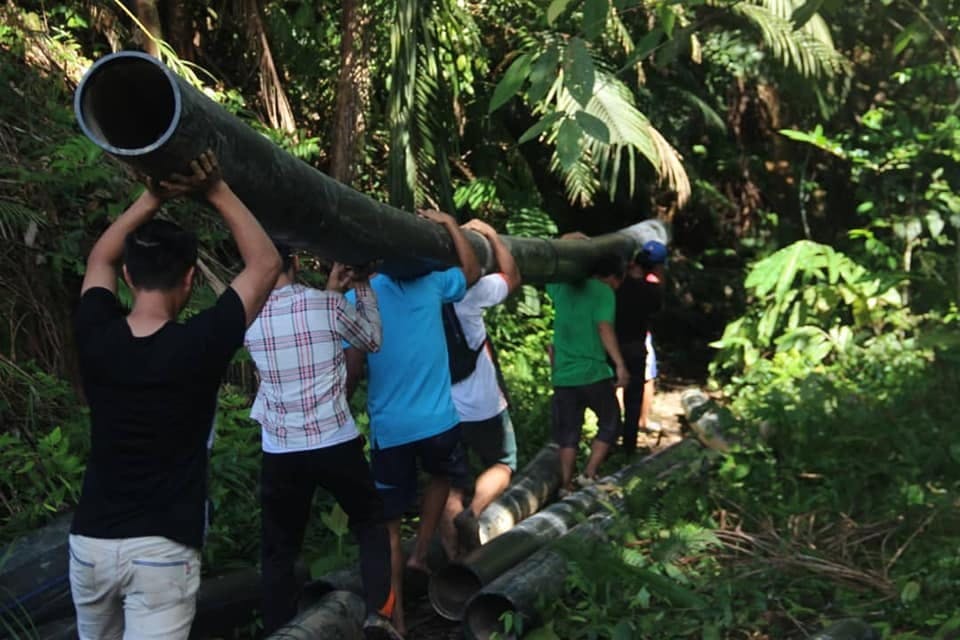 Another reason why Tonibung’s initiative appeals to communities is that the group—which was born out of the Asian financial crisis in 1997—fosters local indigenous entrepreneurship as part of its projects, creating much-needed new rural jobs.

Villagers aren’t just encouraged to be involved in projects from the planning stage, but they themselves are responsible to operate and maintain the micro-hydro systems once they are in place. And where possible, the group designs and builds turbines itself, using recycled aluminium to give beverage cans and other waste materials a second life.

“We are committed to circular economy principles. By making our own components, we also reduce the dependency on imported equipment. The idea is to keep the technology indigenous and to make it affordable and accessible to everyone,” says Lasimbang.

At its workshop and training facility Create Borneo in Kampung Nampasan, an indigenous village in Sabah, the organisation grooms the next generation of indigenous renewable energy engineers, ensuring that communities have the capacity to look after their power stations. Over the past decade, dozens of youths have participated in these programmes.

Some of these farmers-turned-engineers have set up their own renewable energy businesses, and now manufacture turbines for the organisation. 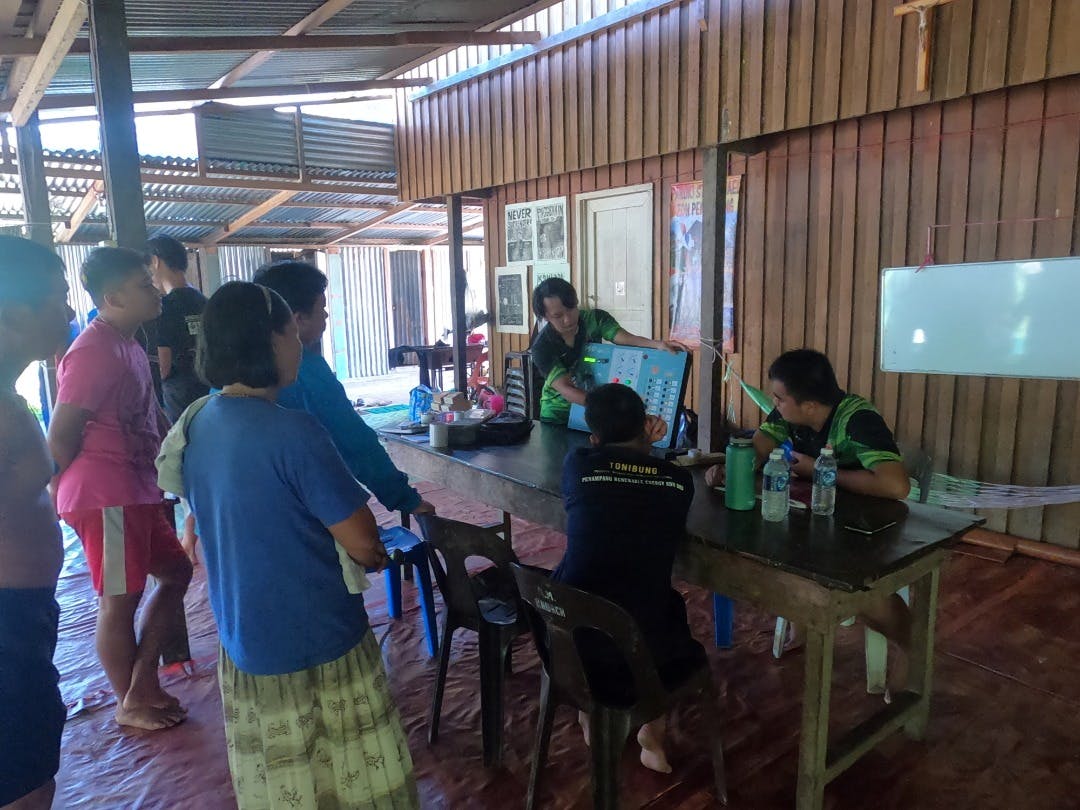 Bill Baxter Martin, a 23-year-old technician who supports Tomibung’s training programmes, says that providing rural communities with opportunities and electricity is not only essential to safeguarding indigenous cultures but also to combatting climate change.

It makes villagers less likely to fall prey to ruthless agribusiness and logging companies looking to seize indigenous lands. And since forests play an important role in keeping pollution out of rivers, hydropower systems present an additional incentive for communities to protect them.

“If indigenous youths have a source of income, they don’t have to move to the city to look for a job,” Martin tells Eco-Business. “If we protect indigenous communities, we also protect forests and the climate.”

Research shows that deforestation rates are significantly lower in areas occupied by indigenous people. In a 2019 report on climate change and land, the Intergovernmental Panel on Climate Change (IPCC) stated that indigenous and community land rights are critical to preserving the world’s remaining forests and keeping carbon in the ground.

For the 50 families that call Kampung Buayan their home, electricity has been a game-changer, Lasimbang says. The village lies on Borneo’s famous salt trail, and clean power has enabled the community to expand its ecotourism programme, attracting thrill-seekers keen to explore the route traditionally followed by indigenous farmers when taking their produce to markets on the west coast, and returning with salt and other goods. Kampung Buayan safeguards a forest area of more than five square kilometres.

In 2018, the group also completed its first microgrid project, linking up Kampung Buayan with nearby Kampung Tiku. Connecting the two villages has enabled Kampung Tiku—which is home to fewer families but endowed with much larger hydro resources—to transmit surplus power to its neighbour. In 2019, another hydro facility was added to the microgrid to meet the two communities’ growing demand for electricity. 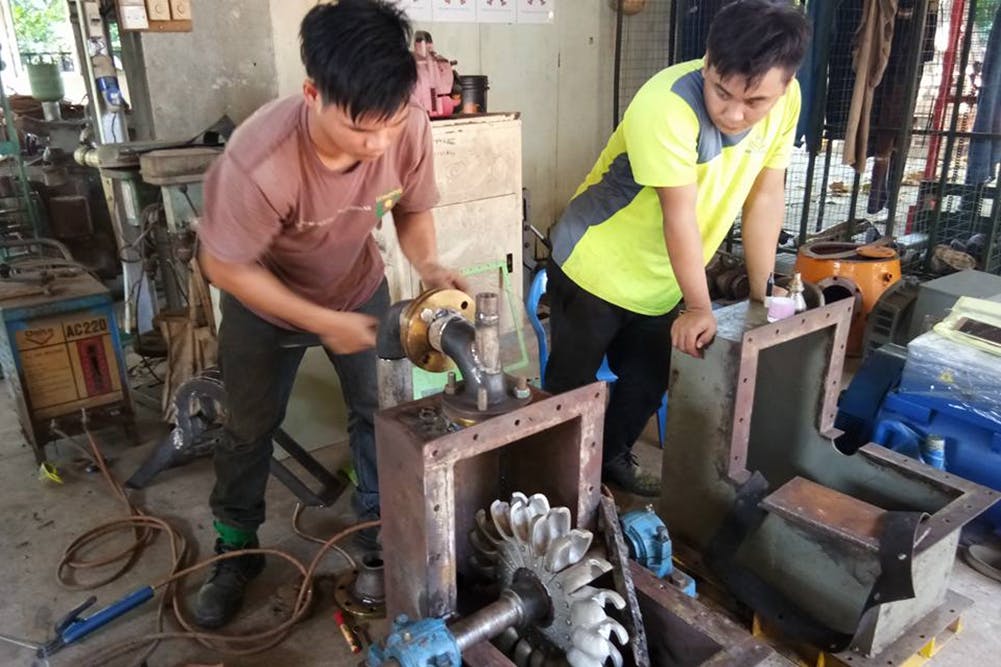 As Malaysia continues to build out its national grid, Tonibung sees an opportunity for rural communities to generate revenue by selling excess green power to utility firms in the long term, although the policies that would enable such transactions have yet to be introduced.

The organisation currently has several dozen more proposals for hydropower projects on the table that are awaiting funding, with most of them concentrated in Borneo’s Crocker mountain range. But just as the organisation picks up momentum, it faces an existential threat.

The Covid-19 pandemic has heavily impacted the group’s operations, with lockdown measures making it difficult to send materials and staff members to installation sites.

Last year, the group expected up to 30 youths to participate in its training programme, but only 10 could attend. And with all projects on hold, donors—which include Malaysian telecommunication provider Maxis, Air Asia Foundation, and the United Nations Development Programme (UNDP)—delay payments that Tonibung depends on to stay afloat.