As crucial climate talks progress this week, Eco-Business photojournalist Fraser Morton was on the ground to capture key moments from the negotiations in the city of Glasgow.

The second week of the COP26 talks in Glasgow got underway on Monday by tackling arguably the toughest topic of the critical climate talks — how to compensate the countries most vulnerable to climate change, which are the least responsible for causing it. Meanwhile outside the event venue in the Scottish city, the remnance of protests from the previous week rumbled on, with thousands of people, including teen activist Greta Thunberg, calling for world leaders to commit to ways to drive down emissions to avert climate calamity.

Protesters have included indigenous activists agitating against carbon offsetting on their land, a march against greenwashing, and activists in inflatable “Pikachu” costumes rallying against Japan’s coal industry. There have been successes too. Highlights have included a global methane pledge, which aims to cut anthropogenic emissions of a particularly dangerous greenhouse gas, and a pledge to end deforestation by 2030.

Eco-Business photojournalist Fraser Morton has been on the ground in Glasgow to capture key moments from the 26th United Nations climate change conference, which has brought together heads of state, climate experts and campaigners from more than 100 countries to thrash out deals for a better future. Here are some images from Glasgow. 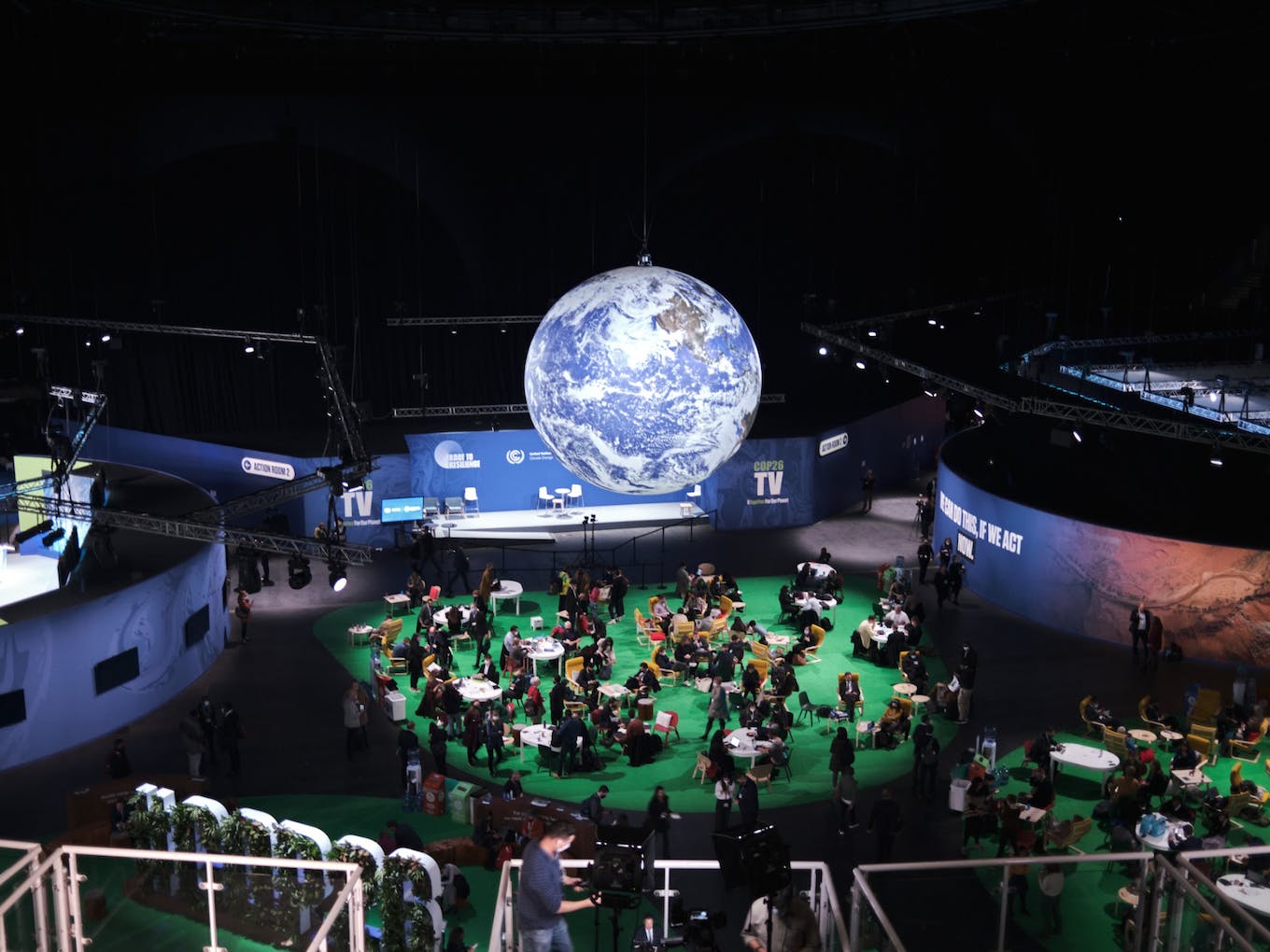 The Blue Zone in the COP26 venue in Glasgow. Image: Fraser Morton/Eco-Business

The Blue Zone in the COP26 venue highlights the importance of marine conservation efforts. Only accredited officials can enter. It is an area where the main international climate negotiations will occur. There have been absences from major world polluters, including China’s Xi Jinping, Russia’s Vladimir Putin and Saudi Arabia’s Mohammed bin Salman. 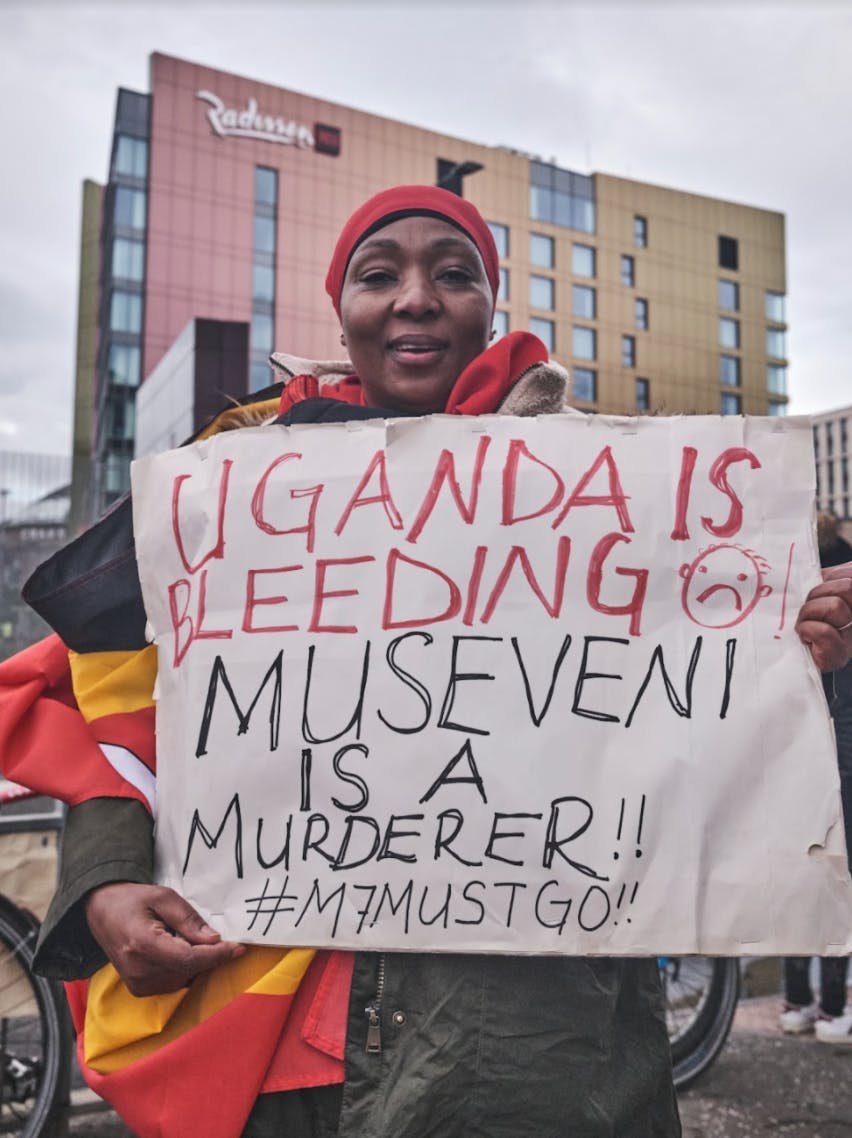 A Ugandan protestor rails against her country’s leader at COP26. Image: Fraser Morton/Eco-Business

A Ugandan protesting against General Yoweri Kaguta Museveni. M7, as he is nicknamed, has been accused of genocide during his 35-year presidential term. Speaking at the conference this year, the 77 year-old politician highlighted the connection between socio-economic transformation and environmental protection. “If you conserve under-development, you should forget about conserving the environment… Therefore, let the world banish greed, ignorance, irresponsibility and rebelliousness, save our planet and use our greater knowledge to ensure affluence for all the people of the world,” he said. 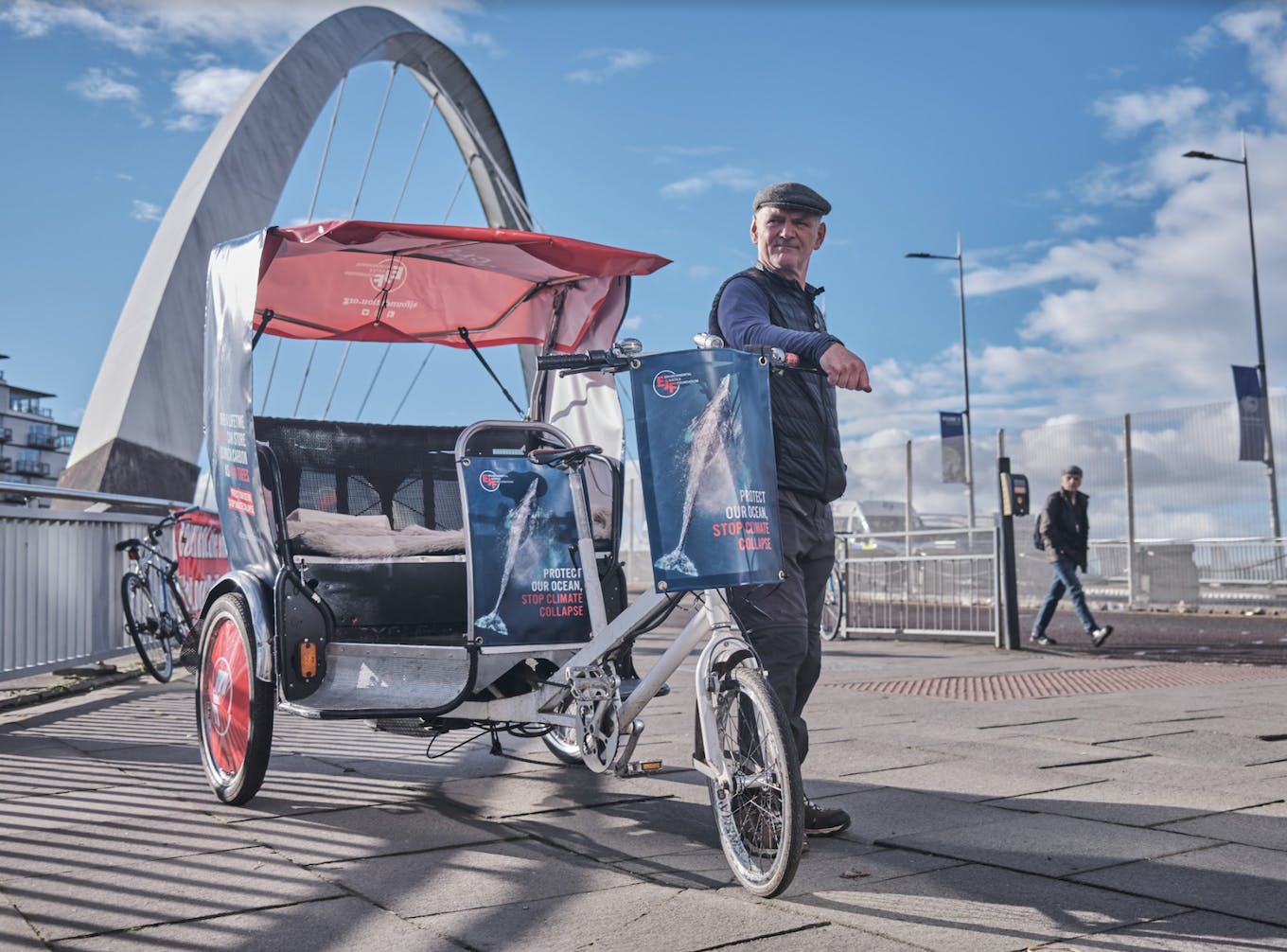 A man posing with his rickshaw awaiting a passenger. Image: Fraser Morton/Eco-Business

On 9 November, the New York-based non-profit the Institute for Transportation and Development Policy (ITDP) launched the Cycling Cities Campaign at COP26, highlighting various cities that are promoting cycling and decreasing carbon emissions, including Glasgow. A global coalition totalling 60 over bicycle organisations penned a letter to COP26 attendees to champion the use of bicycles. Despite this, electric Formula One cars are on display within the Blue Zone of the conference. Lord Tony Berkeley, patron of the All-Party Parliamentary Group on Cycling and Walking commented: “Electric vehicles provide an attractive option because they require little behaviour change. The reality is that we all need to make large and wide-ranging changes to our lifestyles.” 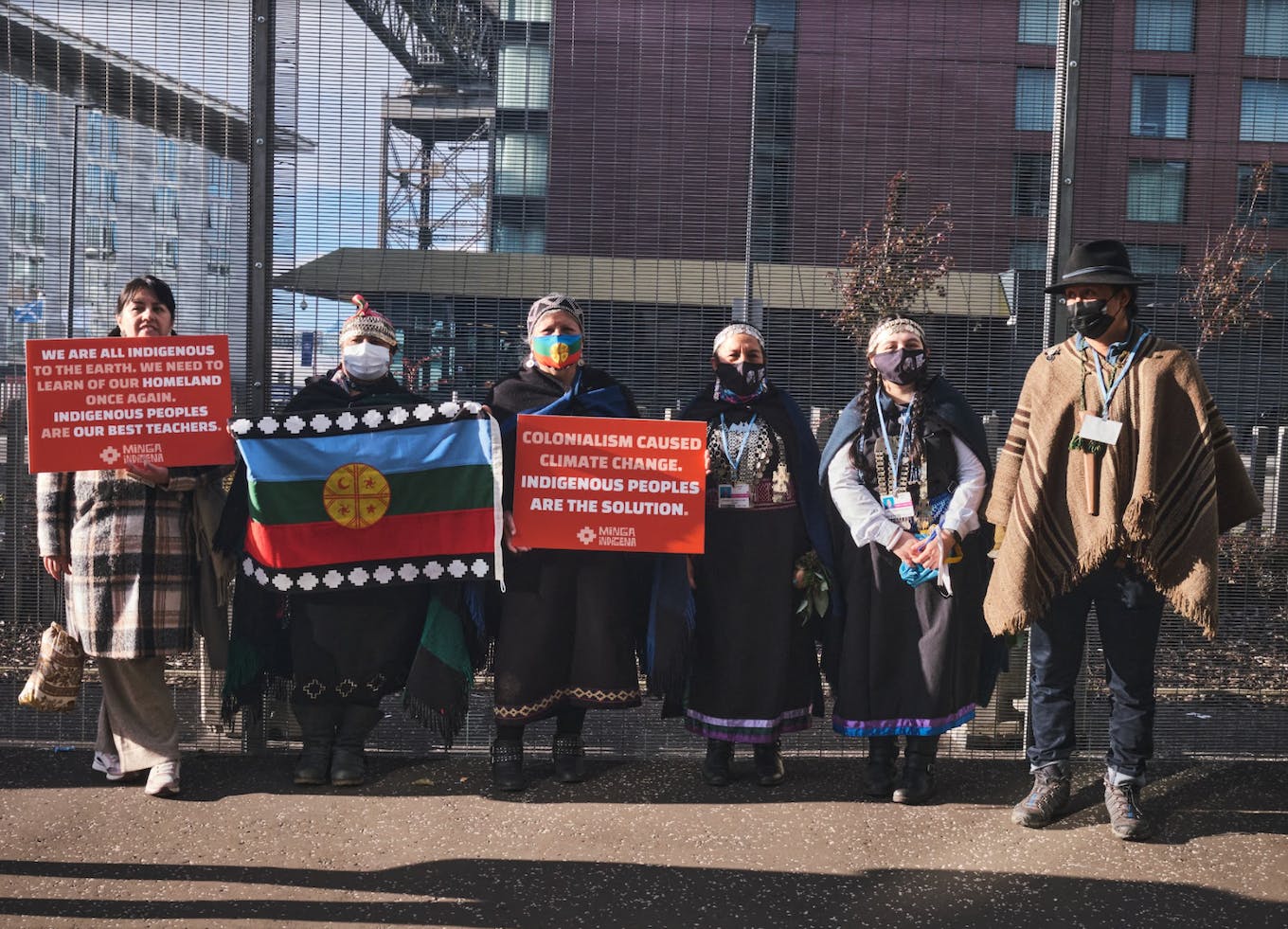 A group of indigenous protesters at COP26. “Colonialism caused climate change. Indigenous peoples are the solutions,” reads one of the posters. Image: Fraser Morton/Eco-Business 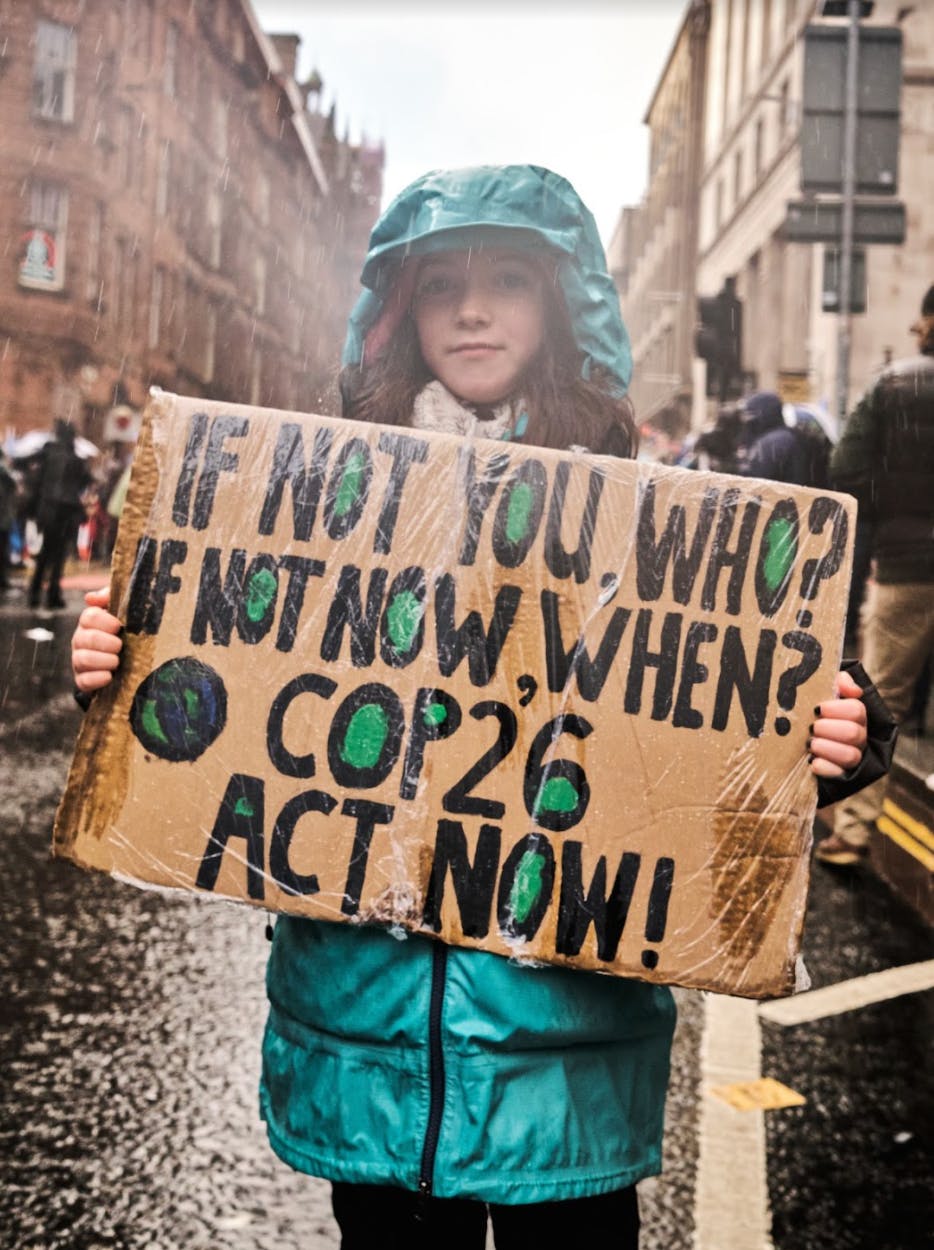 “If not you, who? If not now, when?” A young girl holds a placard in the rain in Glasgow for the COP26 climate talks. Image: Fraser Morton/Eco-Business

On 6 November, dubbed Global Day of Action for the Climate, over 100,000 protestors braved the rain and marched through the streets of Glasgow demanding for political leaders to take bolder climate action. 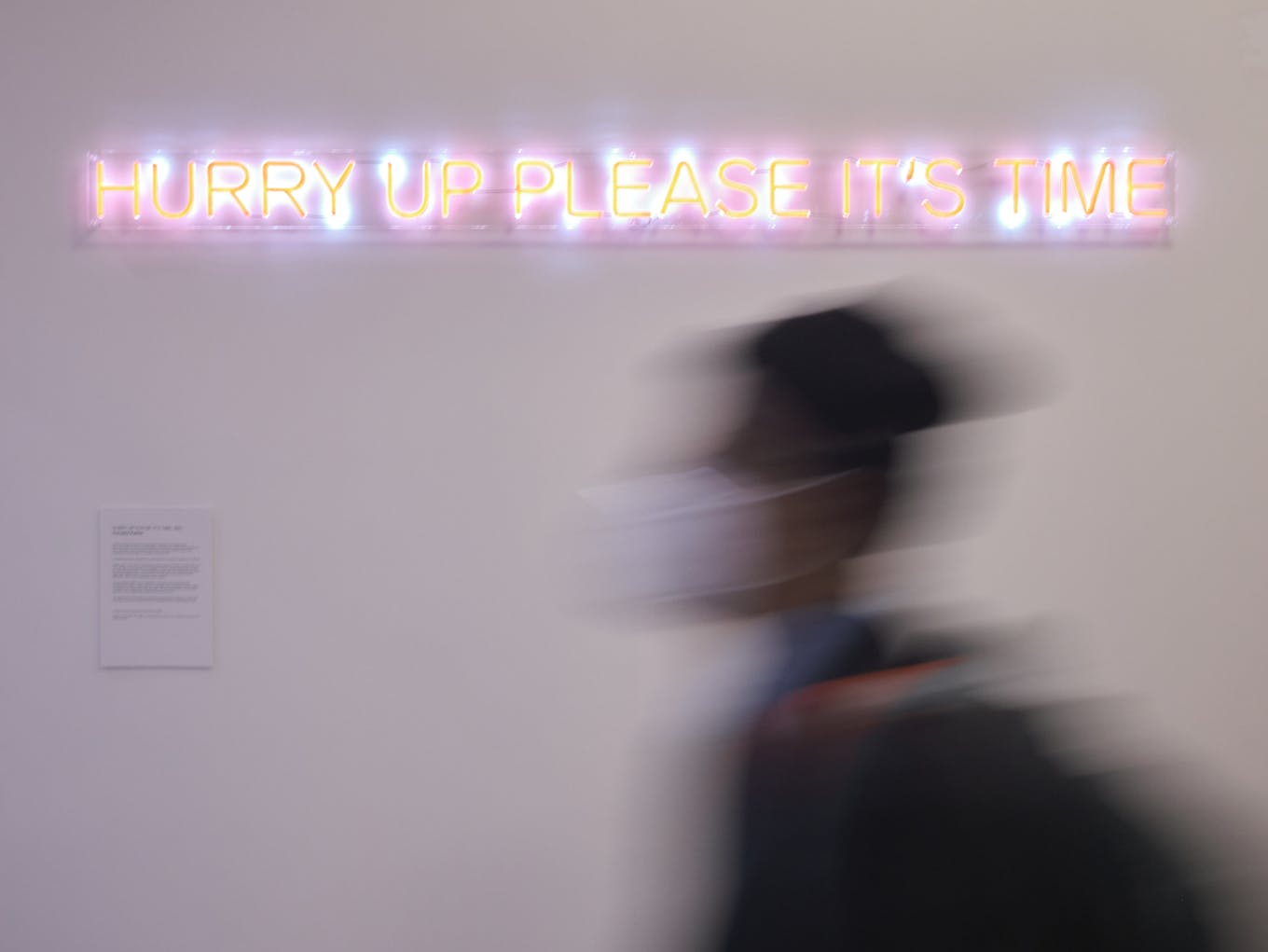 A neon art piece by contemporary British artist Cornelia Parker. Extracted from TS Eliot’s poem The Waste Land, the quote signifies the traditional call of the British pub landlord, telling their customers the bar is closing and it’s time to go home. In the context of COP26, the quote is a rallying call for swifter climate action. 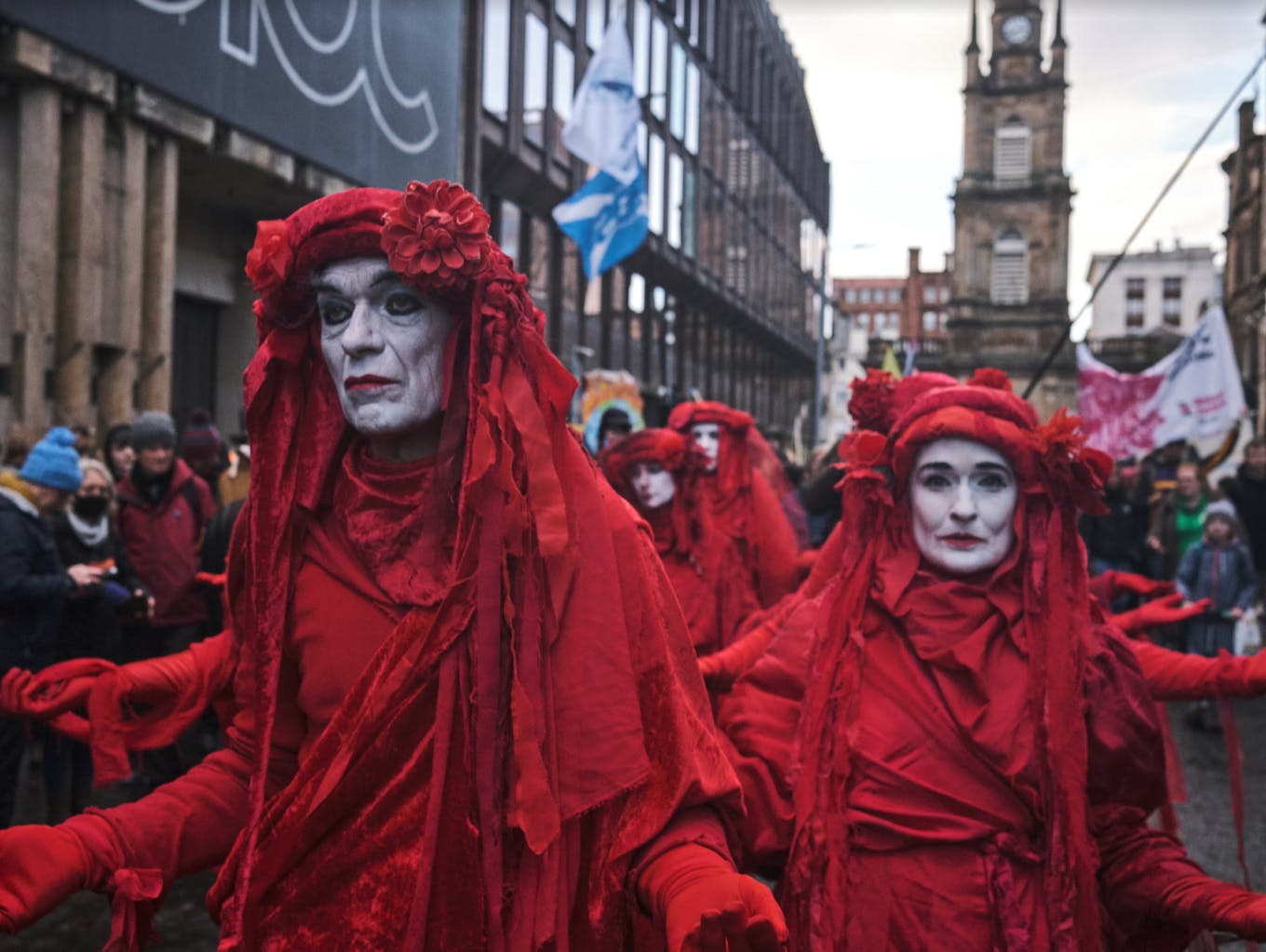 Representing climate action group Extinction Rebellion, crimson-clad activists took to the streets of Glasgow to deliver haunting performances and tell world leaders they will have blood on their hands unless they take radical action. Doug Francisco, their founder said: “The Red Rebel Brigade symbolises the common blood we share with all species, that unifies us and makes us one.” 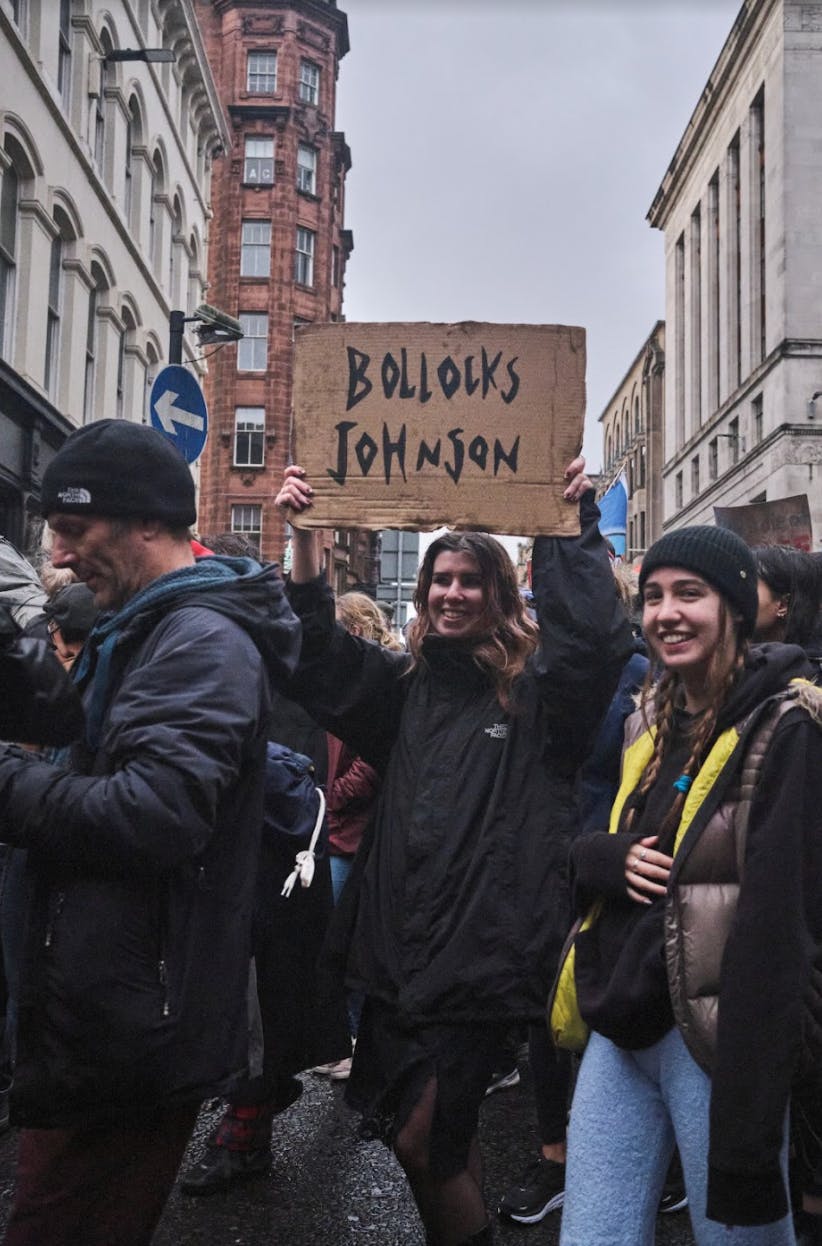 A protestor holding up a sign with a twist on UK Prime Minister Boris Johnson’s name. Image: Fraser Morton/Eco-Business

The UK has set ambitious climate targets during COP26 such as securing global net zero emissions by 2050. However, UK Prime Minister Boris Johnson was accused of hypocrisy for using a private jet to fly from COP26 in Glasgow back to London to attend a private members club dinner. 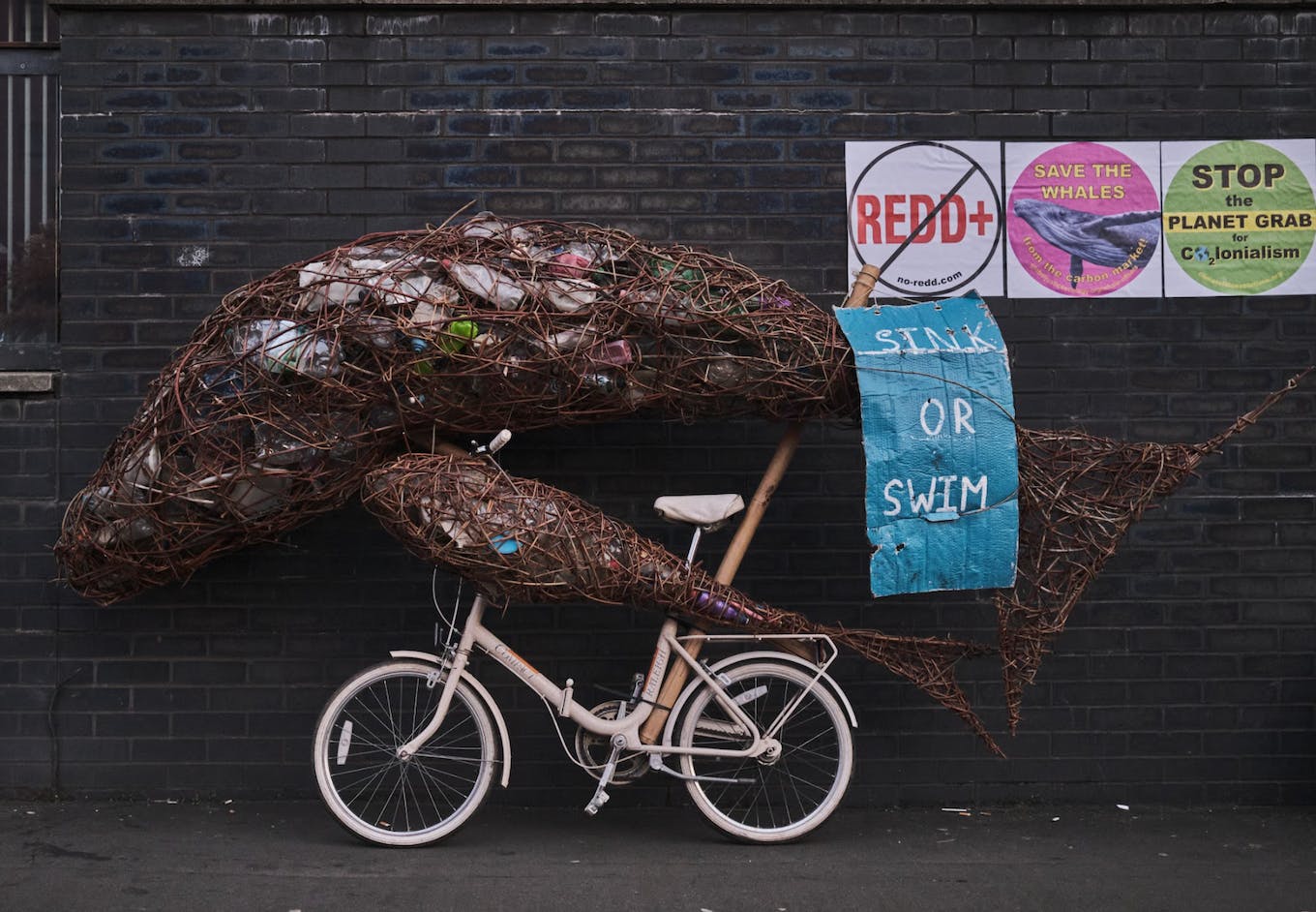 A mural of a whale filled with plastic trash, by the words “sink or swim”. Image: Fraser Morton/Eco-Business

A whale stuffed with plastic waste riding a bicycle has been spotted around the streets of Glasgow during COP26. The creator of the artwork is United States-based non-profit Global Justice Ecology, which campaigns for the protection of whales. Panama, Ecuador, Colombia and Costa Rica have pledged their support for marine conservation by establishing the Eastern Tropical Pacific Marine Corridor (CMAR) initiative this week at COP26. If successful, this will be the planet’s largest interconnected network of marine parks. 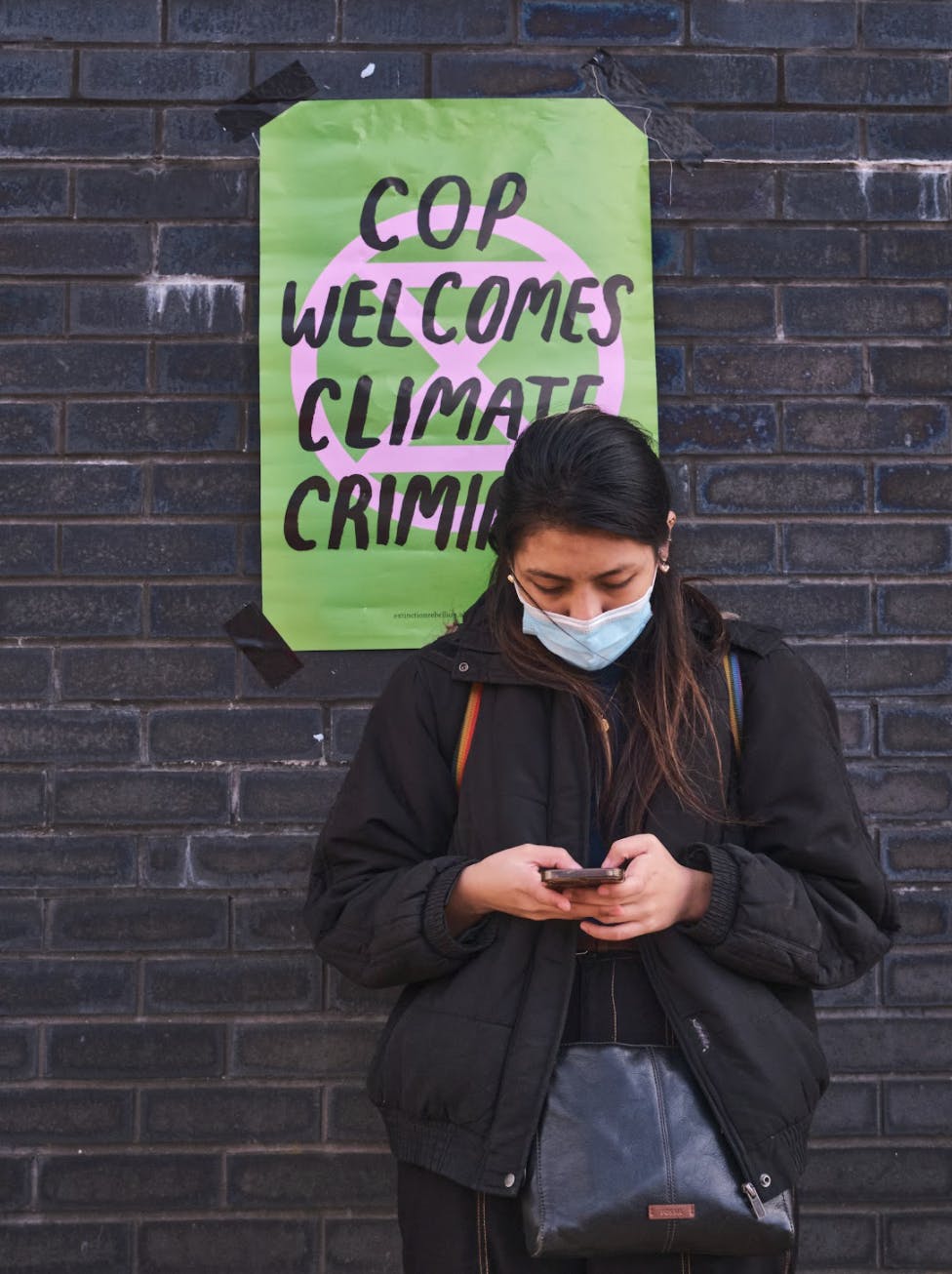 A lady leaning against a poster with the words “COP welcomes climate criminals”. Image: Fraser Morton/Eco-Business

A masked woman stands in front of an Extinction Rebellion rebellion poster during the first week of COP26, just outside the conference area. The poster reads “COP welcomes climate criminals”. Extinction Rebellion has decried COP26 proceedings as inadequate and slow, and held mass marches and demonstrations around Glasgow for the past week. At least two dozen arrests have been made by police. 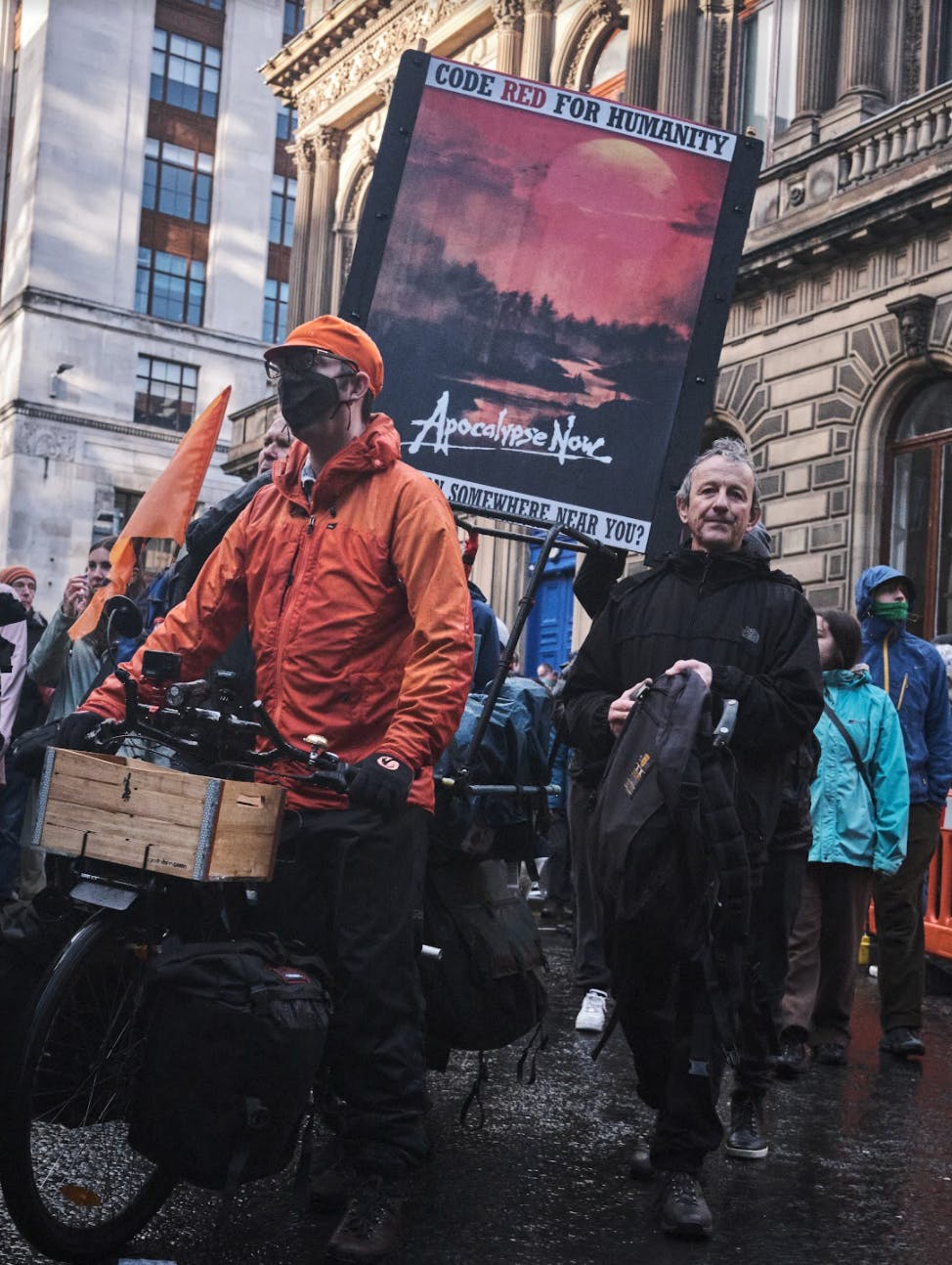 A cycling protestor with a banner attached to his bicycle. The banner reads “Code red for humanity” on a poster for the movie Apocalypse Now. Image: Fraser Morton/Eco-Business

United Nations Secretary-General António Guterres stated that the latest Intergovernmental Panel on Climate Change (IPCC) report “is a code red for humanity”, and urgent action is needed to reduce greenhouse gas emissions to avoid the worst consequences of climate change. That urgency has been widely reflected on the streets of Glasgow for the COP26 talks, but question marks hang over the commitments world leaders are prepared to take to rein in emissions. 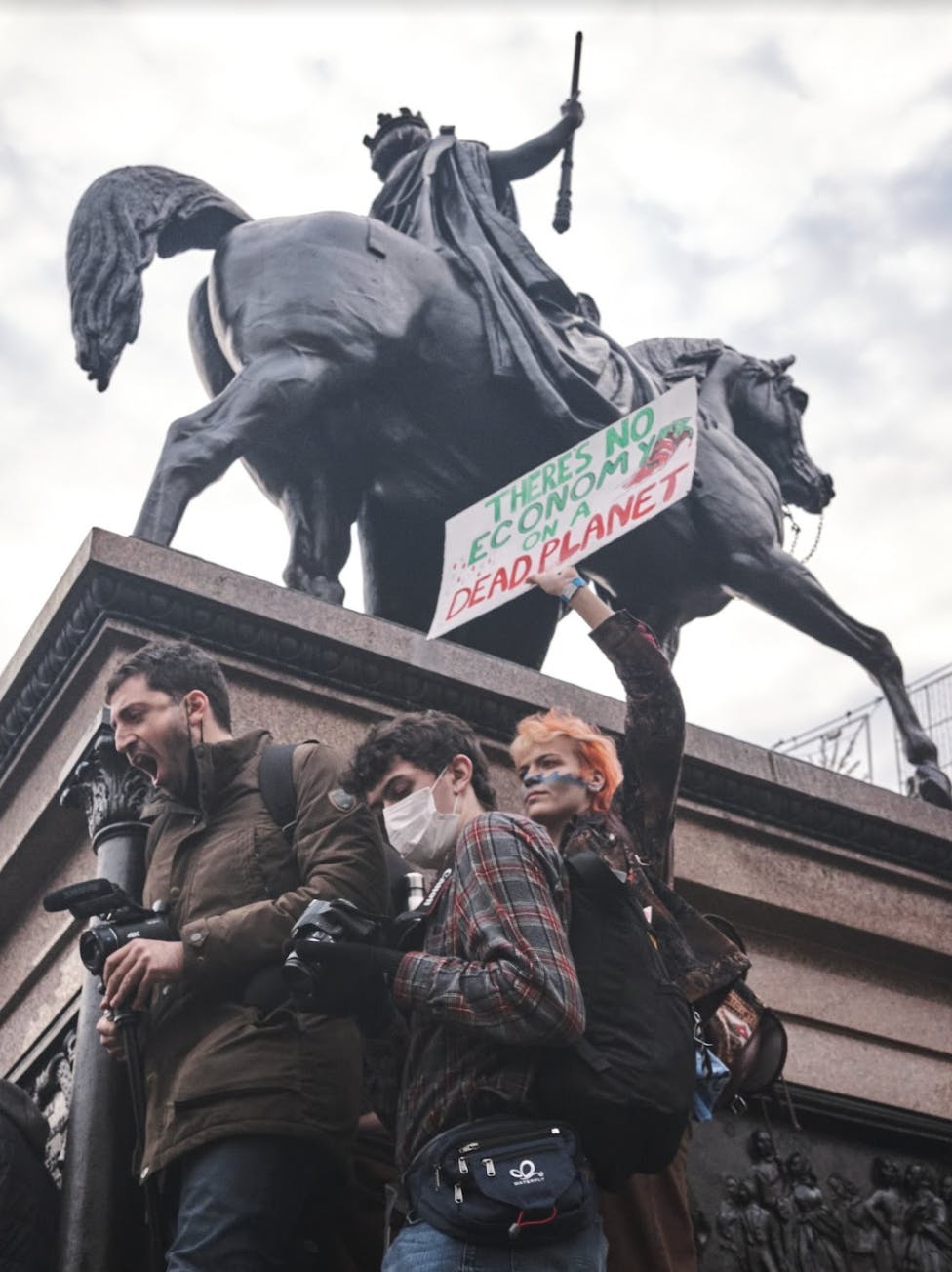 “There is no economy on a dead planet.” A protestor holds up her signage on top of a statue of Prince Albert in George Square. Image: Fraser Morton/Eco-Business

Protesters clamber on a statue of Prince Albert, in George Square on 7 November. Prince Albert was the husband of Queen Victoria, who pushed for the abolishment of slavery and educational reform. The young protester’s message reads, “There is no economy on a dead planet.” Protesters defied police all day and remained on the statue. 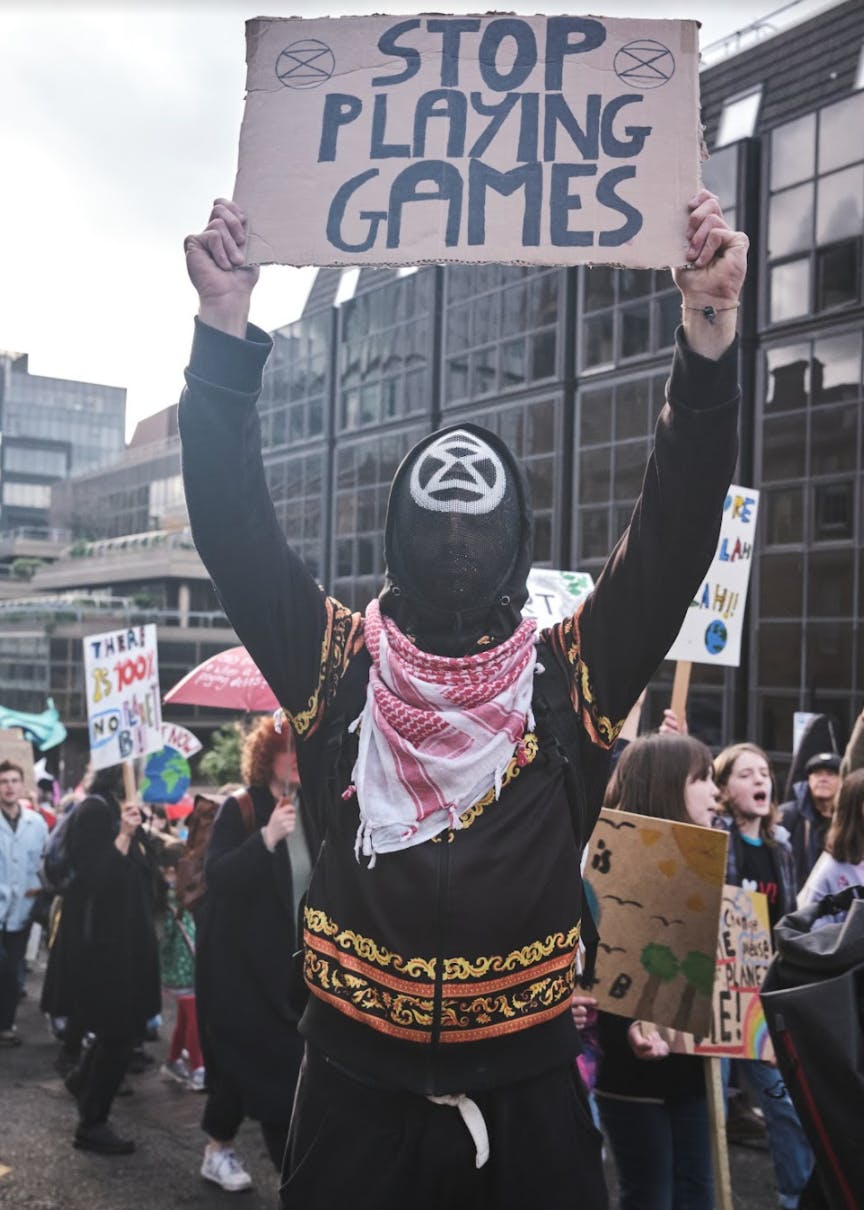 A protestor dressed in all black and a full-faced mask bearing the Extinction Rebellion logo. The placard in his hands read “Stop playing games.” Image: Fraser Morton/Eco-Business

A nod to the widely acclaimed Netflix series Squid Game, an Extinction Rebellion protestor wears a similar costume to the main characters in the show. Mirroring the main themes the show portrays, such as an unequal power dynamic between the rich and the poor, the protestors are calling for immediate and extreme changes to be made. Among Extinction Rebellion’s demands is for the UK to halt biodiversity loss and achieve net zero emissions by 2025.

On 8 November, former US president Barack Obama told the COP26 delegates: “It is going to be hard” to keep temperatures to below 1.5C. “International co-operation has always been difficult, it is made more difficult by misinformation and propaganda that comes out of social media these days. Getting people to work together on a global scale takes time, and that’s time we don’t have … If we work hard enough for long enough, those partial victories add up.”