Beyond being development goals, corporate leaders argue that the Sustainable Development Goals (SDGs) should become a universal benchmark for sustainable investing around the world.

In 2006, the anti-poverty group World Vision launched a massive effort to help people in the Ethiopian district of Wolaita Sodo protect themselves from droughts. Ten years on, the project has been a staggering success: it’s replenished 12 once-depleted springs, opened one new one, and increased soil fertility for at least 80 per cent of the farms in the region while putting more than 2,000 people to work.

The organisation achieved this in an unconventional way: namely by hiring villagers to plant trees and training nearly 300 farmers in “agroforestry”, which involves strategically planting trees across their territory to pull nitrogen, water, and other nutrients out of the air and infuse it into the earth.

It covered its costs by carefully documenting the amount of carbon captured in its trees and selling carbon offsets to companies that needed to reduce their carbon footprints.

More and more, we see major corporations making commitments to climate and other SDG targets, yet many are struggling to accurately measure and report their contributions and then translate this into language their stakeholders understand.

The carbon offsets made the project possible, but what about all the other “goods” the project generated – the food security, the replenished water, and the influx of funds for education? These “co-benefits” certainly have value, too; but until recently there was no way to quantify them.

That began to change in 2015, when every country in the world signed off on the United Nations Sustainable Development Goals (SDGs), which are a list of 17 sustainability criteria woven into the lending guidelines of development banks around the world.

That means they’re already being used to guide the deployment of billions of dollars in development finance, while corporate leaders like Unilever CEO Paul Polman argue they should become a universal benchmark for sustainable investing around the world – a sort of Generally-Accepted Accounting Principles (GAAP) for the planet.

There’s some evidence the idea is gaining traction. In March, for example, the Forest Trends Supply Change initiative identified 447 companies that have pledged to reduce their impact of forests, and a small but growing number of the companies it tracks are explicitly linking their pledges to the SDGs.

At the same time, research by Ecosystem Marketplace shows that carbon project developers see the SDGs as a way of standardising their once-nebulous co-benefits (World Vision’s Sodo Project delivers on 11 of the 17 SDGs).

That standardisation can also help companies like Mars and Danone, which work with hundreds of thousands of smallholder farms around the world. Indeed, more than 100 of the companies tracked by Supply Change have committed to work more closely with smallholder farms, for which no standardised reporting exists.

“More and more, we see major corporations making commitments to climate and other SDG targets, yet many are struggling to accurately measure and report their contributions and then translate this into language their stakeholders understand,” says Marion Verles, CEO of the Gold Standard, which is a carbon accounting standard backed by a consortium of environmental NGOs.

“Beyond lowering greenhouse gases, we’re reporting impacts such as the creation of new jobs, access to clean energy and water, better health, and the protection of natural habitats,” she says. “This opens the door to new opportunities to communicate credible impacts and allows businesses to receive the recognition they deserve.”

This month, her organisation and the United Nations Framework Convention on Climate Change (UNFCCC) jointly launched the Gold Standard for the Global Goals, which aims to provide rigorous, standardized methods for measuring and comparing corporate sustainability.

What are the SDGs?

There are 17 SDGs, and they include things like ending poverty, ensuring good education, and building pipes, bridges, roads, and flood-plains that will work in a changing climate. 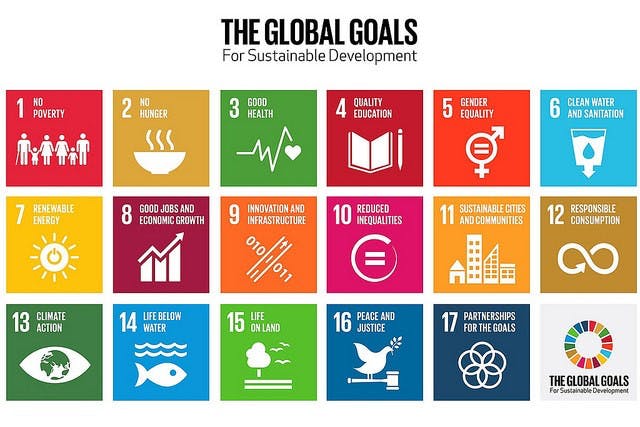 Basically, it’s stuff you can’t argue with – but how do you get there?

First, by breaking the broad goals down into specific targets, and the SDGs are broken down into 169 of those, and each of them has billions of dollars in financing attached to it. Second, by weaving them into existing frameworks to get buy-in across the planet. Third, but drawing in the private sector.

Goal 13, for example, is the one dealing with climate change, and it delineates five specific goals – from integrating climate change into national policies to helping people understand the science – but it also explicitly recognises the UNFCCC as the primary vehicle for fixing this mess, and the UNFCCC has about a million financing mechanisms embedded in it.

“Probably 13 or 14 of the [SDGs] have climate change written into them,” said Unilever CEO Paul Polman at last year’s World Economic Forum in Davos. “If you look at the goals on forestry or oceans… or the one on fragile states…climate change permeates the whole [of the] Sustainable Development Goals.”

He’s on a crusade to win over the private sector one CEO at a time, but his success on that front will hinge on the uptake from investors, lenders, and consumers – groups that, he points out, stepped up big in Paris.

Sustainable Development Goal #15 aims to ramp up conservation and restoration of forests, farms, fields, and mountains by 2020, Daniel Duncan, the Prime Minister of Côte d’Ivoire, says his country aims to meet that goal by helping farmers boost productivity.

“We have to have agriculture that’s friendly with the environment,” he said in Davos, as he outlined the country’s five-year agricultural development program – a $4 billion initiative that aims to ratchet up production while reducing the amount of land used for farming and restoring forests.

But for the plan to work, it will need to draw investments of more than $2 billion from the private sector, and he sees that money coming through a combination of carbon finance and long-term investment in sustainable agriculture.

“If we don’t reach the SDGs, if we don’t manage this, then [limiting warming to 2°C] will not be possible,” She said. “Because then a lot of countries will look to cut down forests [instead of investing] in decarbonising their economy, because it will mean losing jobs.”

The mention of both climate and sustainable development in the same breath within the Paris text is seen as a breakthrough for those who have watched contentious negotiations about joining the two.

Karen Holm Olsen, a researcher who was involved with the effort to (optionally) incorporate sustainable development reporting within the Clean Development Mechanism (CDM), said that only about 40 projects out of more than 8,500 registered have used the reporting tool, which some countries found threatening.

“When you talk to governments, it’s so diverse what people think about this topic,” Olsen said.

Christof Arens, a researcher at the Wuppertal Institute, agreed that the sustainable development-inclusive Paris text is only the starting line as countries determine what the successor to the CDM will look like. “This is just a headline for now,” he said. “How to operationalise it is up to negotiations.”

And perhaps there is only one place to start.

“We need to start at the end,” said Martin Hiller, Director General of the Renewable Energy and Energy Efficiency Partnership. “What kind of results do we actually want to achieve?”