The region’s clean energy players saw mixed fortunes in 2020 as they grappled with Covid-19 disruptions. How did they roll with the punches, and how will they adapt to a post-Covid world?

2020 started strong for renewable energy companies in Southeast Asia. Customers were knocking on their doors, interest in clean energy and cost savings had never been higher, and the pipeline of projects in countries like Vietnam, the Philippines, Indonesia and Myanmar was steadily growing.

Then, along with the explosion in Covid-19 cases and widespread lockdowns, things went sideways for some companies. Clients put their projects and, sometimes, payment on hold. Electricity demand dropped in the region, which had seen 6 per cent demand growth per year for the past 20 years. With airplanes grounded, clean energy firms with teams stationed in a single country were caught in a bind as engineers and other staff could not get to project sites in neighbouring countries.

SEACEF was launched in June last year and aims to accelerate the region’s low-carbon transition by providing capital and development support to early-stage clean energy projects. In 2020, its team spoke to 145 investment prospects across Vietnam, Indonesia and the Philippines with over 10 gigawatts in total capacity. It has invested in three companies to date—PT Xurya Daya Indonesia, which has ambitions to tap Indonesia’s solar rooftop opportunity, Singapore-headquartered Levanta Renewables, which has a portfolio of wind power projects in Vietnam, and renewable energy developer Highland Infrastructure’s Real Wind Energy project in the Philippines.

“With Covid, there’s really a lock on development capital,” said Wallick. Investors rationalised their portfolios and pulled back from emerging markets more than mature markets, he said. The other challenge was the drop in electricity demand, which “has a chilling effect on the timetable of execution of power purchase agreements (PPAs) and planning by big distribution utilities”.

The future still looks good, you only don’t know how long this suffering will last.

The impact of the pandemic on Southeast Asia’s renewable energy firms has been mixed, however. Some companies saw revenue fall by up to 60 per cent last year as major projects were put on hold, and those that have survived said they know of industry players that shuttered due to customers that could not pay up.

Other companies continued to grow. This, they said, was due to a customer base that consisted of pandemic-proof businesses such as food manufacturers, the backing of large strategic investors, and the fact that they were part of a major company.

Southeast Asia’s clean energy industry is not out of the woods, although long-term prospects are bright. Some companies said the first half of 2021 could be a greater struggle than 2020, as customers remain cautious about investing in clean energy and business confidence remains low.

But all of them have gained rich insights from the past year and are raring to “build, build, build”—in the words of Atem Ramsundersingh, chief executive and board director of microgrid and renewable energy firm WEnergy Global—once economic activity picks up and vaccination begins in the region. “The future still looks good, you only don’t know how long this suffering will last,” said Atem.

Here’s how companies kept going during the pandemic, and how they plan to adapt to a post-Covid world.

Execution of clean energy projects was a problem for teams that were largely based in one country.

“Decentralised corporations, decentralised electrification—that’s the future,” said Atem of WEnergy Global, whose flagship project is a 2.4 megawatt hybrid power plant with 2.4 MWh energy storage and 14 km of microgrid in Sabang, Palawan, in the Philippines. “I must say 2020 demonstrated that we don’t need every employee to be stationed in one place or country.” 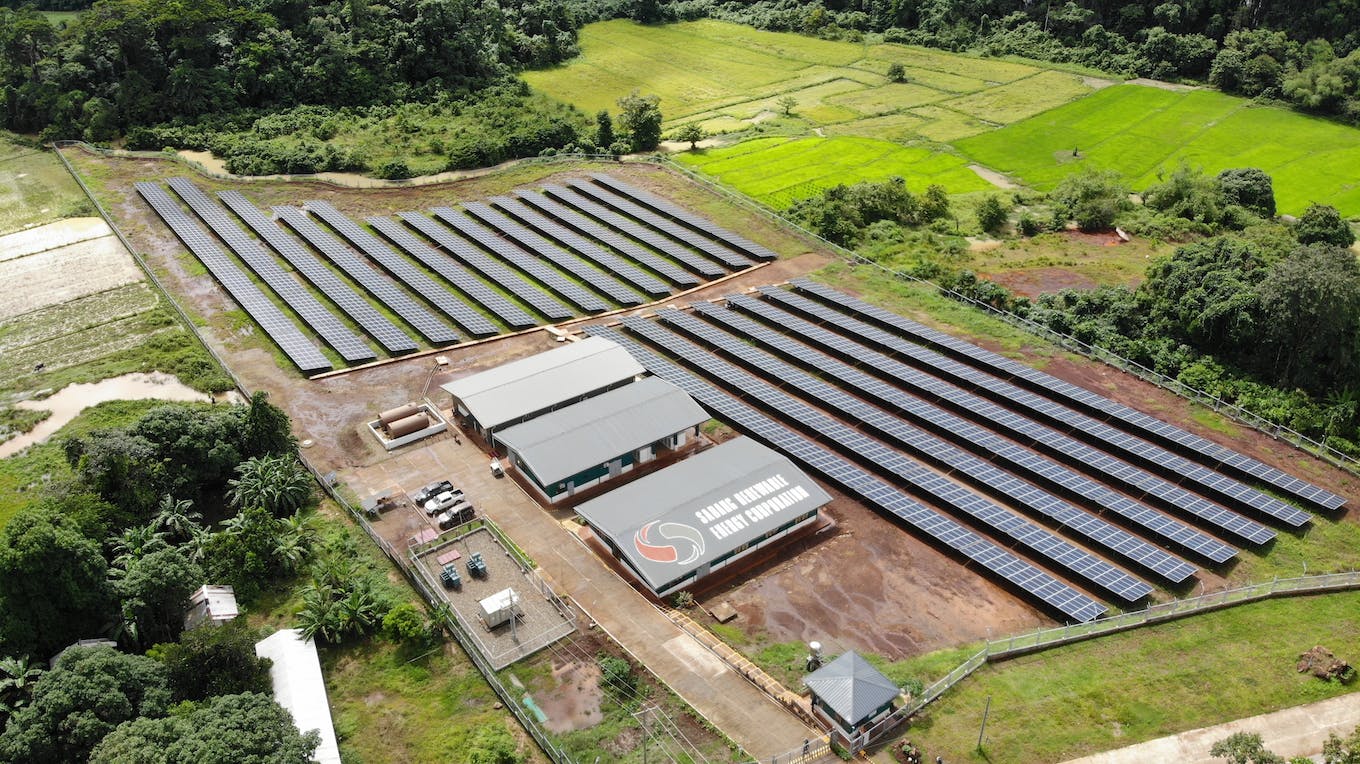 “The positive thing we learnt (from the pandemic) was that we can work remotely in an efficient and effective way,” said Sujay Malve, chief executive of renewable microgrid firm Canopy Power. “In terms of doing business, you can still generate leads and win a pipeline of projects but to close the (deal), you still have to have that final contact where you meet in person. That tells us we need to have more local representation going forward, rather than having everybody here in Singapore.”

Canopy Power began growing its local presence in Indonesia and the Philippines even before the pandemic, and now has two people in Jakarta and one team member in Manila doing business development.

Having built a name for itself among Southeast Asia’s eco-conscious tourism players, Malve said Canopy would still focus on hospitality going forward, but put “extra effort” in diversifying its pipeline to mining or food and beverage companies.

Together with Total Solar Distributed Generation, Canopy will develop one of Southeast Asia’s largest off-grid renewable microgrids on the remote island of Koh Rong Sanloem in Sihanoukville, Cambodia this year. This will allow more than 60 hotels, resorts and guesthouses on the island to get more than half their power from renewables instead of being fully reliant on diesel.

WEnergy Global began 2020 on a high note—it signed three contracts, marked its eighth anniversary, and flew its team, shareholders, directors and partners to Yangon in Myanmar to celebrate.

When the world began moving into lockdowns in March, Atem said clients began putting advance payments and entire payment timelines on hold. Instead of dwelling on the contracts, the company engaged clients in conversations to build trust. It answered their questions about the reliability of of supply chains, details on chosen technologies, data monitoring and other issues.

It did not cut salaries or let go of anyone, not even the 14 employees in Sabang in Palawan when energy consumption dropped by nearly half between March and July due to the tourism slump, said Atem.

It kept team morale high by completing a rooftop solar project for a storage facility in the Philippines when a small window between lockdowns opened in June last year.

It paid a Covid allowance to employees to make up for the expenses of working from home. And instead of sitting around feeling “demotivated”, Atem said the team brainstormed ways to innovate microgrid design and evaluated wind and tidal turbines for hybrid power systems. This year, the company is looking to start building its first microgrid in Myanmar’s Ayeyarwadi (Irrawaddy) Delta for a fishing community of about 1,000 people.

When Eco-Business spoke to Olivier Duguet, chief executive of wind energy firm The Blue Circle, in late-January, he was in Cambodia for an upcoming project that has been included in the country’s electrical masterplan for 2024. The Blue Circle began negotiating the implementation agreement last year with four different agencies and ministries, and “now we are finally getting there”, said Duguet. The 80 megawatt project, the company’s first in Cambodia, could start construction in 2022 and complete in 2023.

But Duguet is more worried about Vietnam, where The Blue Circle installed Asia’s largest turbine with a diameter of 150 metres last year. The Vietnamese government has yet to announce if feed-in tariffs for wind will continue after 1 November this year, and this has cast a pall of uncertainty over the industry. 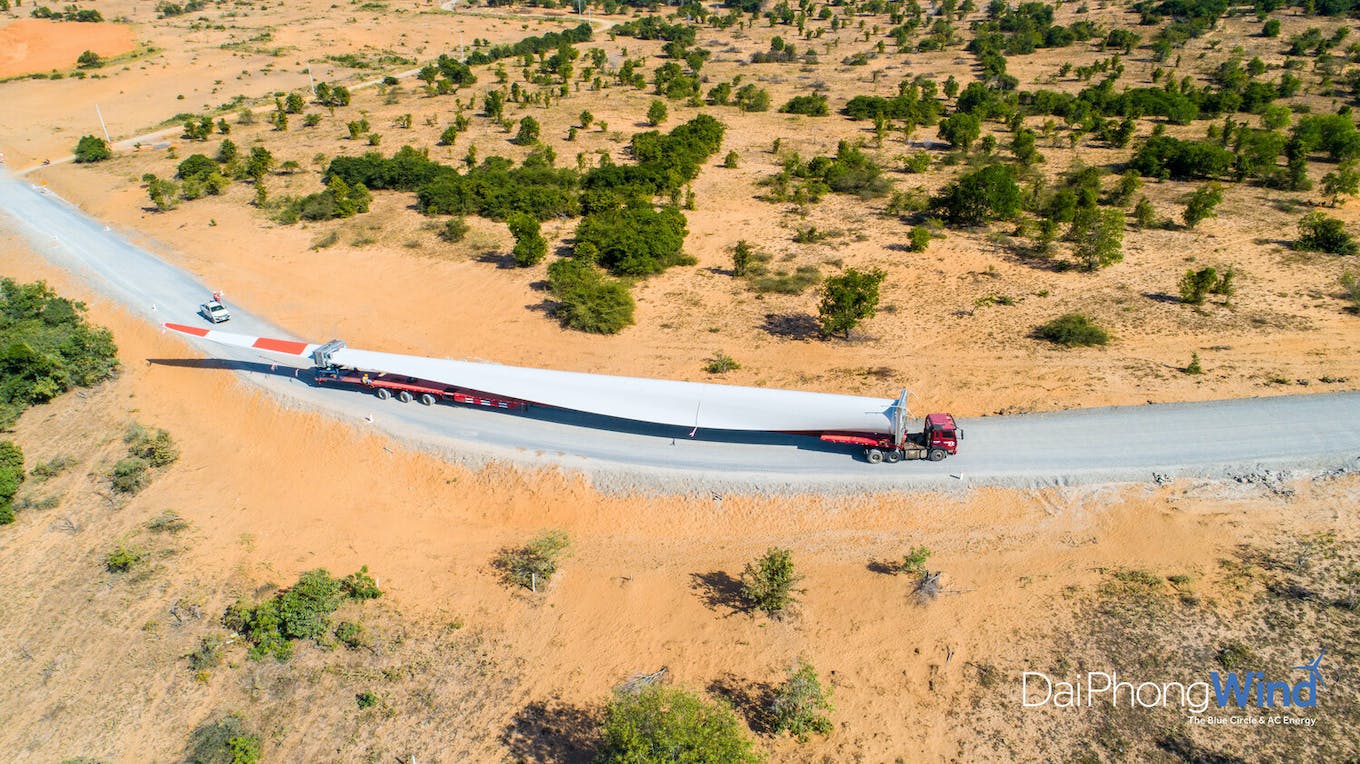 Parts of a wind turbine being transported to the project site in south Vietnam. Image: The Blue Circle

While the outlook beyond November is unclear, there is currently a “big boom” in wind farm construction in Vietnam as the industry rushes to complete projects in order to qualify for the feed-in tariffs. “All the big cranes and trucks are in south Vietnam. Companies are shipping turbines to Vietnam and starting to erect them in a few weeks,” said Duguet, whose company is constructing another 40 megawatt project in Mui Ne, southern Vietnam this year. It owns and operates the projects and supplies energy to the grid of state-owned firm Vietnam Electricity, or EVN.

While a green recovery is on the agenda in Europe, it has not been discussed in Southeast Asia, said Duguet. “On one hand it’s frustrating, but on the other hand, it’s an opportunity.”

Even leaving out renewable energy’s low-carbon attributes, solar and wind are simply cheaper than fossil fuels, Duguet said. Governments can encourage clean energy investments by either fixing a price for clean power for a specific period, or mandating that a certain percentage of energy distributors’ power must come from renewable sources, he added.

4. Price it right for belt-tightening customers

In spite of Covid-19, 2020 was a year of significant growth for Singapore-headquartered Cleantech Solar and Total Solar Distributed Generation (TSDG), two companies with large commercial and industrial customers.

Arnaud Ayral, Cleantech Solar’s country head of Malaysia, Vietnam and Cambodia, said this was due to ongoing expansion of its portfolio, which consists of clients from diverse segments of the economy. They include tyre manufacturers and agribusinesses.

Customers of Cleantech Solar and TSDG do not pay upfront costs under the PPA model, which has become more popular amid belt-tightening times.

Customers only pay for the electricity generated by the solar panels which, depending on market, could be 10 to 40 per cent cheaper than power from the grid, said Gavin Adda, chief executive of TSDG, Asia.

“We’ll go to companies like Singapore LNG Corporation, Changi Airport, Bollore and put solar on their rooftops. They don’t need to pay anything for that. They pay for electricity for the next 15, 20, 25 years,” Adda said. Last year, TSDG Asia doubled its business from 2019, installing about 60 megawatts’ capacity. Clients included animal feed and livestock company Betagro, which installed a 24 megawatt-peak system across 24 facilities in Thailand providing about 15 per cent of its total power consumption.

Ayral said Cleantech Solar is seeing greater interest and uptake of the PPA model as customers seek to preserve capital, reduce costs and strengthen their sustainability measures. Cleantech Solar undertakes full investment and project development costs and is responsible for ongoing operations and maintenance of the solar systems, he said.

The business case is extremely robust today and the imperative to act on carbon-dioxide emissions has also never been greater than before.

5. Have powerful investors and backers

Both TSDG and Cleantech Solar also have powerful backers.

Energy major Shell acquired a 49 per cent interest in Cleantech Solar in 2018, and Ayral said having a strategic investor like Shell boosted customers’ confidence in the company.

For TSDG, success in 2020 was due in part to the team being spread across nine countries in Asia. Only 20 per cent of its team of 100 people are in its Singapore regional headquarters, said Adda. This means execution of projects is faster and travel restrictions have less of an impact.

Being part of a larger company—TSDG is a subsidiary of energy giant Total—and having a strong balance sheet helped. “Customers in this kind of environment are a bit nervous about working with a smaller company. They want to work with a big company that they know they can rely on through this kind of crisis,” he said.

In Asia, TSDG also gets referrals from its other hubs in Europe, Middle East, China and the United States, as well as from its parent company. For instance, TSDG received work in Asia from customers like Nike, Nissan and Apple, which it had worked with in other parts of the world. Its contract with Singapore LNG Corporation to build and operate a 600 kilowatt-peak rooftop solar system at the Singapore LNG Terminal on Jurong Island was from Total’s petrochemical-related work with the client.

Both TSDG and Cleantech Solar said 2021 is set to be an even better year. More companies are keen on adopting solar power at zero capital expenditure, said Ayral. “The business case is extremely robust today and the imperative to act on carbon-dioxide emissions has also never been greater than before.”