How smart is Singapore at recycling e-waste?

Only four in 10 Singaporeans know how to recycle e-waste. While news of regulation for gadget makers is welcome, a university professor has called for a more sincere effort from producers to promote electronics recycling.

In his National Day rally speech in 2017, Prime Minister of Singapore, Lee Hsien Loong outlined his vision of a Smart Nation that is digitally equipped and tech savvy. But how smart is Singapore at dealing with the forgotten side of technology—electronic waste?

Six in 10 Singaporeans do not know how to recycle their e-waste, according to a January study commissioned by the National Environment Agency (NEA). This is reflected by Singapore’s meagre 6 per cent recycling rate for e-waste, 60,000 tonnes of which is produced by the wealthy city-state every year.

In light of this, Masagos Zulkifli, Minister for the Environment and Water Resources announced in a consultation session on Thursday that Singapore will introduce long-awaited regulations to strengthen e-waste management.

One of them is the Extended Producer Responsibility (EPR) approach, which obliges the makers of mobile phones, laptops and washing machines to track, collect and enforce the recycling of their electronic products.

Masagos added that “producers can mitigate these downstream effects through their business decisions. This includes designing products for durability and ease of recycling.” 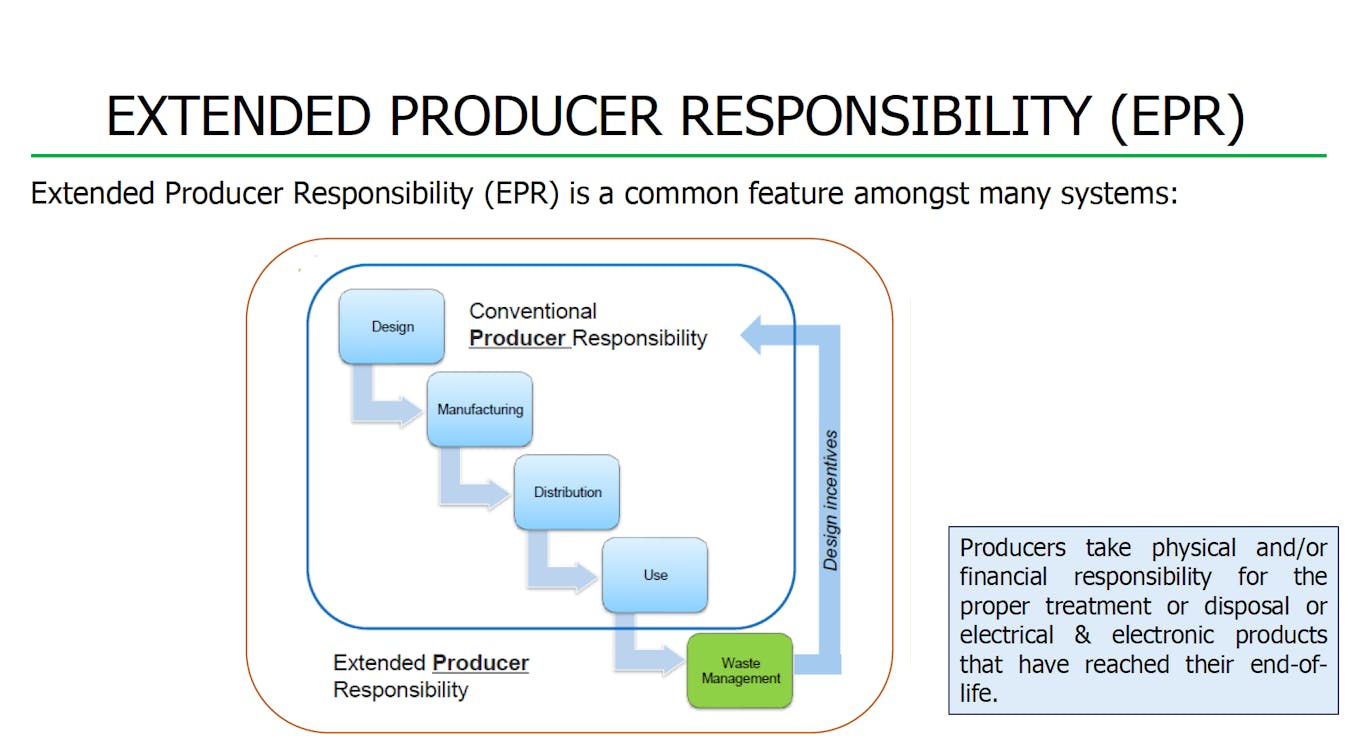 The Extended Producer Responsibility (EPR) system, which puts the onus on producers, is used in many countries such as Sweden and South Korea. Image: Ministry of the Environment and Water Resources.

Specific collection measures or targets have yet to be set—the ministry will “start with a soft target”, according to Masagos.

Traditionally, Singaporeans have relied on rag-and-bone men—known locally as “karung guni men”—to recyle some used electronic products. However, most of these collectors are unable to fully recover and reuse e-waste material, so the bulk of it ends up in landfills, is incinerated or exported overseas.

Veteran karung guni man, Chua Ngak Theng told Eco-Business that he can no longer recycle many electronic items because of the closure of Sungei market last year, a place the karung guni men have sold secondhand electronics for the last 90 years. Chua added that not many Singaporeans recycle, because of low awareness and inadequate policy-driven efforts to date.

The only e-waste regulations currently in place in Singapore are upstream controls that restrict the use of hazardous substances in electronics, so that used products are more easily recyclable. NEA has largely relied on voluntary programmes by industry partners and communities to spearhead recycling initiatives.

Among the most high profile are telecommunication company StarHub’s RENEW (REcycling Nation’s Electronic Waste) programme, and rival Singtel’s ReCYCLE initiative. Both nation-wide recycling programmes were launched over the last few years to encourage consumers to drop off unwanted electronics at public outlets dotted around the island.

Private-sector led initiatives are sporadic and limited in breadth and depth.

Chia Boon Chong, Singtel’s director of group sustainability, commented that while Singtel’s collection of e-waste has increased since the ReCYCLE programme, bulky items like refrigerators are more challenging for owners to recycle. He noted that the low e-waste recycling rate is partly due to “the absence of a uniform system” to recycle bulky items.

More details on Singapore’s new regulatory framework for e-waste management are expected to surface in the coming months.

Professor Seeram Ramakrishna, chair of Circular Economy Taskforce at the National University of Singapore, commented that private sector-led e-waste initiatives have tended to be “sporadic and limited in breadth and depth.”

He added that Singapore’s infrastructure for managing e-waste is “lagging behind” the rate of e-waste generation, despite efforts to boost the recycling rate.

He also proposed that the private sector use Big Data, machine learning and artificial intelligence to better manage their e-waste supply chains and find the right technologies to fit the products they need to recycle.