'How do we become a protector for the oceans?': Malaysian leading recycler on being ocean bound plastic-certified

Heng Hiap Industries collects and reuses plastic found in the vicinity of marine and riverine environments in Johor. Its chief executive Seah Kian Hoe shares why the company wanted to be certified under a global scheme for ocean bound plastic.

The circular economy concept, with a focus on turning waste into resources and extending the life of products and materials, is now increasingly seen as an emerging paradigm for companies that want to promote sustainable growth. Heng Hiap Industries, a Johor-based integrated plastic recycling firm traditionally recycles post-consumer and industrial resins before it ventured into collecting and recycling ocean-bound plastics. The company extracts plastic waste from the environment and produces recycled resin, which is then used for the production of goods for multiple industries, including the automotive sector, home appliances and consumer goods.

Heng Hiap is the first company in the world to receive the Ocean Bound Plastic (OBP) certification, a global third-party verified label scheme designed to encourage the removal of OBP from the environment and address some of the issues of plastic pollution. Plastic pollution is a problem on a global scale. In 2017 there was an estimated 348 million tonnes of plastic pollution. From this, 11 million tonnes of plastic waste go into the world’s oceans and this figure is tipped to triple by 2040. Marine and coastal species are in danger of ingesting plastics and getting entangled or harmed by them. In 2018, Malaysia became the main alternative destination for plastic scrap - after China banned imports of such waste

Heng Hiap recognised the demand from consumers and partners for recyclers to take urgent action to end the scourge of marine pollution. It sought to apply its recycling expertise to OBP to help mitigate the plastic waste problem, and subsequently targeted to obtain OBP certification to verify that their processes meet international standards.

Since getting its OBP certification in 2020, Heng Hiap has committed to collecting and reusing collected OBP found in the vicinity of marine and riverine environments in the coastal areas of Johor. It now collects over 60,000 tonnes of plastic scrap domestically and aims to recycle more than 100,000 tonnes of plastic by the year 2025. Besides serving the Malaysian market, 70 per cent of Heng Hiap’s products are exported to 38 countries. 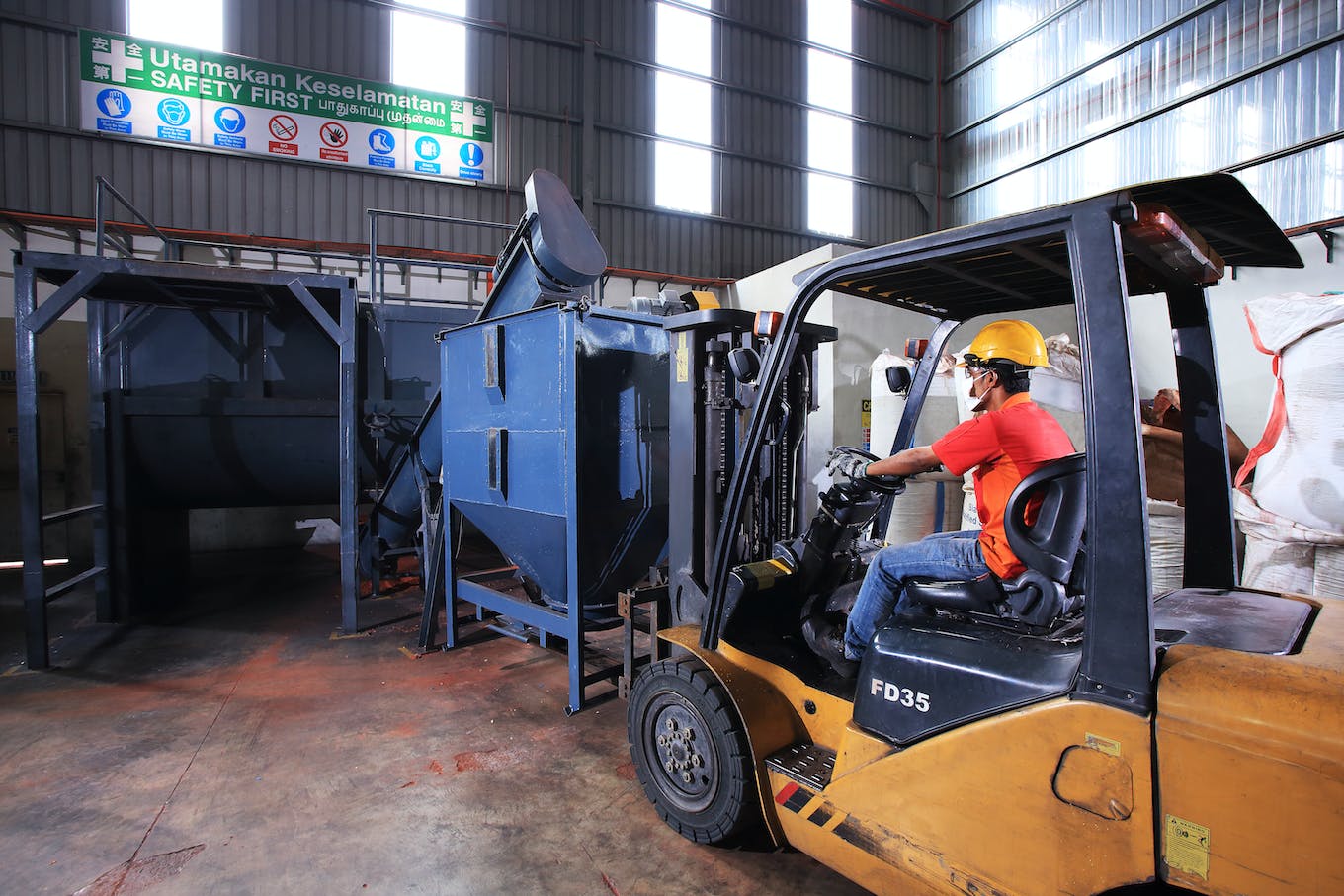 Plastic is separated according to polymer type with a near-infrared automatic sorter. Image: Heng Hiap Industries

What is the OBP certification programme?

OBP is defined as plastic at risk of ending up in the ocean. The OBP certification is designed to ensure that plastic waste is properly collected and managed across the value chain. The programme aims to purge OBP from the environment by certifying the origin and traceability of commercially recyclable OBP, which is important in checking the integrity and determining the quality and performance of the plastic.

To achieve certification, organisations must ensure that there is:
1. No child labour involved
2. Fair working conditions and fair payments made to the waste pickers
3. Adequate waste management that prioritises reduction, reuse and recycling
4. Safekeeping of records, including procedures, methods, product lists and invoices
5. Validation of suppliers and usage of a supply chain model
6. Proper management of subcontractors
7. Declaration of transactions and sales records of purchased, received and sold OBP
8. Safe transport, secure packaging and clear labelling of products

Heng Hiap is also audited for ethical trade and social compliance under the Supplier Ethical Data Exchange (Sedex) Members Ethical Trade Audit, or SMETA, which outlines labour, health and safety, universal rights, business ethics and environmental protection standards. Apart from its ISO accreditation, it is certified by Global Recycled Standard (GRS) for 100 per cent recycled content in its materials. 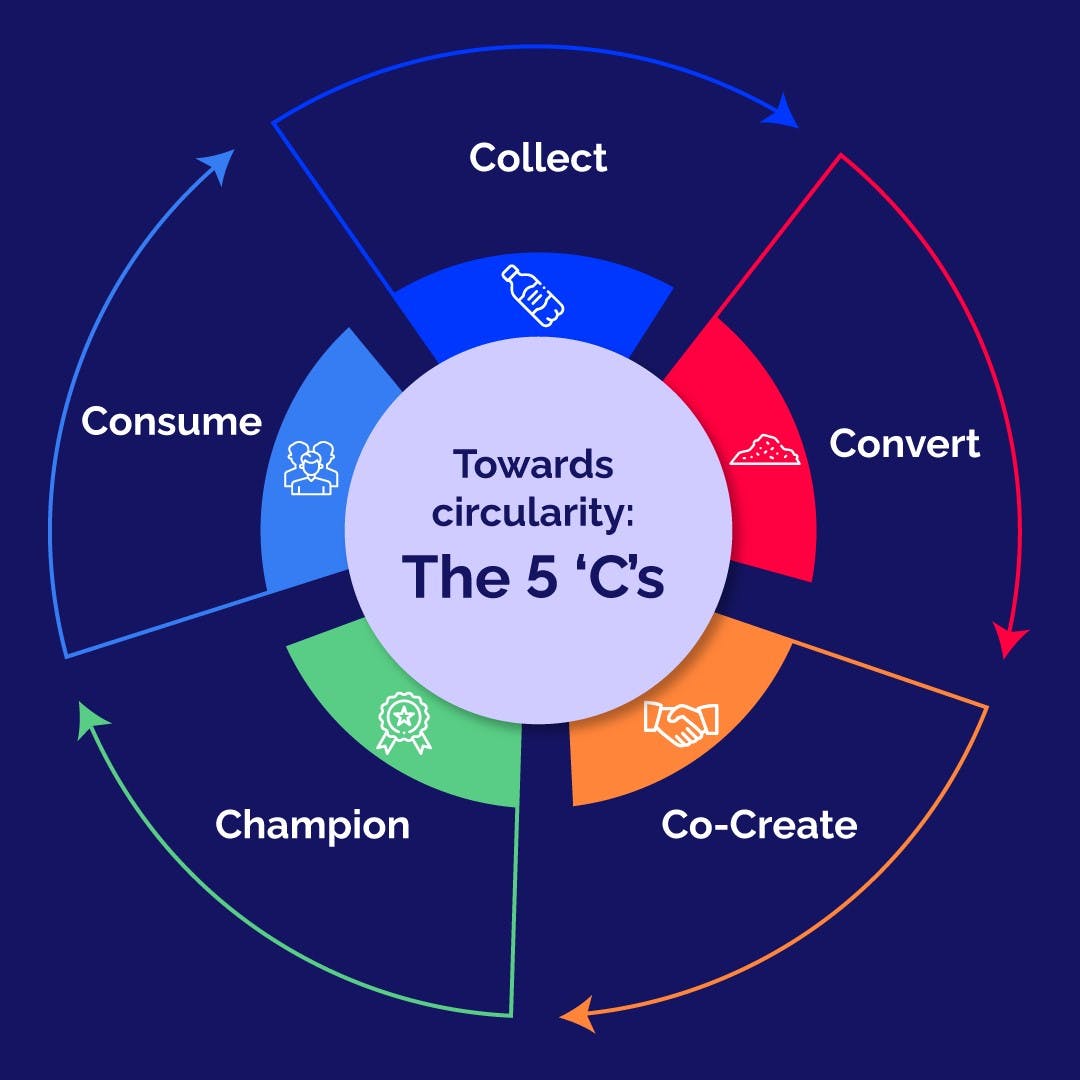 Heng Hiap Industries uses a ‘5Cs framework’ to create a circular model around their products.

Key to Heng Hiap’s success has been their practice of the “5Cs Framework” that promotes sustainable business and allows for effective recovery of materials that can be reused, recycled and remanufactured. The 5Cs covers a broad spectrum of activities and enables stakeholders to collaborate with Heng Hiap to create a circular model around a product:

Collect: Heng Hiap works with an extensive network of partners, which includes local communities and non-governmental organisations to collect post-consumer plastic scrap from households, as well as ocean-bound plastics (OBP) located within 50 kilometres from the shoreline. 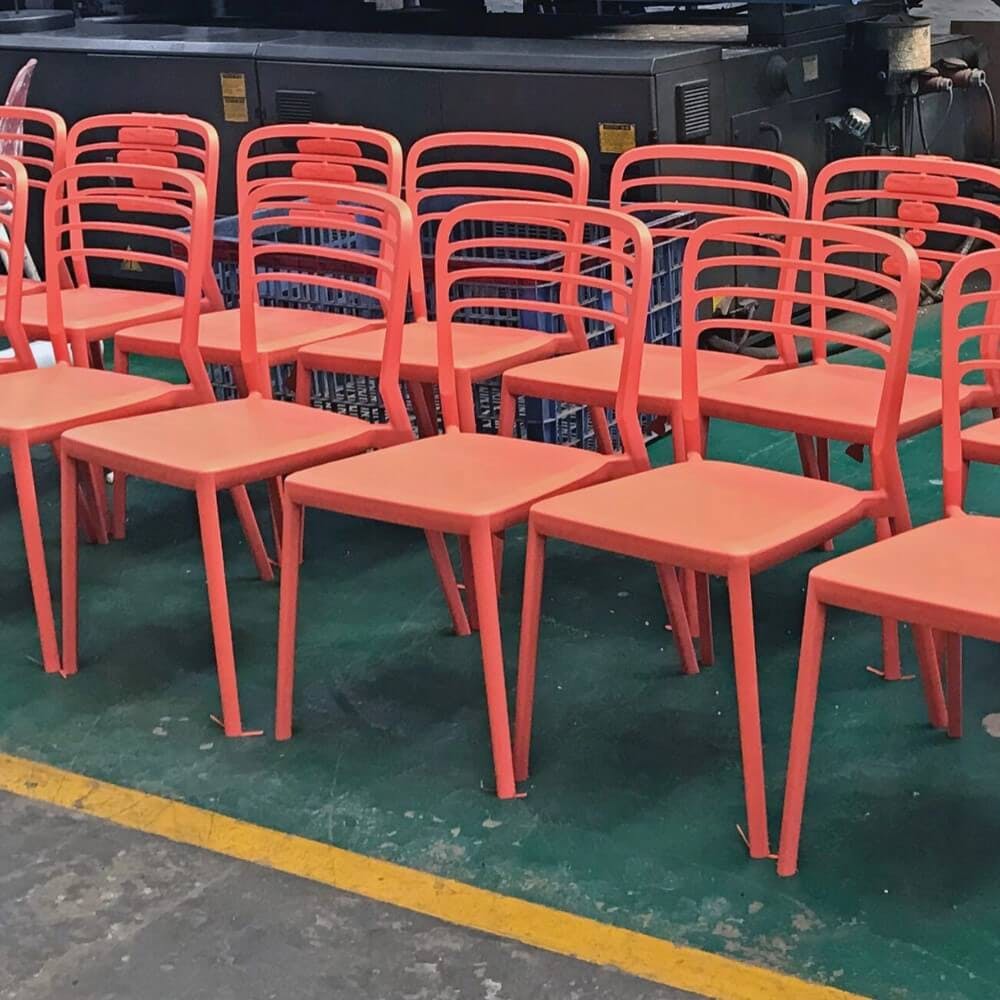 Heng Hiap partnered with Malaysian furniture company Kian to create this ‘Louvre chair’ made from recycled plastics collected from the ocean. The circularity of the chair is factored in, enabling it to be recycled in the future and converted into a useful product again to unlock full circularity. Image: Heng Hiap Industries

Convert: Plastic waste collected is converted into raw materials or industrial materials that are robust and ready to be used in manufacturing.

Co-create: Heng Hiap collaborates with partners and manufacturers to design and create new products from the recycled plastics.

Champion: Heng Hiap partners with big, prominent brands and multinational corporations committed to ambitious sustainability goals - for example, to have 30 per cent of recycled content in their product by 2025 - hence becoming a platform for these organisations to champion circularity principles. Heng Hiap tries to help them realise their recycling aims.

Consume: By communicating a consistent narrative, Heng Hiap hopes to foster the growth of an entire generation of conscientious consumers that will embrace the use of recycled plastics.

In this interview, chief executive and founder of Heng Hiap Seah Kian Hoe shares how the firm adopts and pushes through its circular economy initiatives.

Can you describe Heng Hiap’s process of collecting and recycling plastic waste? How do you work with domestic recyclers?

If you look at the entire value chain of recycling in Malaysia, there are six independent processes - collecting, sorting, crushing, washing, mixing and finally, extrusion. In a more fragmented landscape, (to properly recycle plastic), there will need to be six different companies working either independently or interdependently, with each company often focused on just one of the recycling stages. Here at Heng Hiap, we integrate all six processes into a single-chain system.

We still work with domestic recyclers across the six recycling stages. We understand that there is no proper industrial standardisation in the recycling field, so we come up with internal standards and share them with the domestic recyclers, so that they process their recyclables based on our standards. This is very important as it helps us create a consistent outcome when converting plastic scrap into base material. We can then customise the products to create high-performance and niche materials for export.

What did Heng Hiap have to do to receive the Ocean Bound Plastic Certification? How important is this certification to the company?

Before the pandemic, we observed that marine pollution was dominating the headlines, and within the industry we also noticed a trend - consumers were rejecting plastic because of how it contributed to marine pollution. So, we asked ourselves - are we the polluter or should we be the protector of the oceans? What do we have to do to be a protector? We thought about how we could take our integrated approach for recycling post-consumer plastic, and apply it to ocean bound plastics. 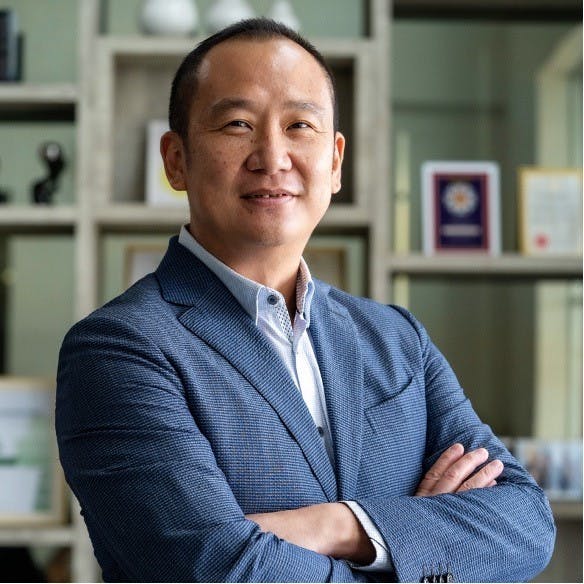 Then we realised we should benchmark ourselves against an international standard and we chose Ocean Bound Plastic Certification by Zero Plastic Oceans because their vision was aligned to ours, which is a focus on traceability and the authenticity of the chain of custody. We studied the certification guidelines, got in touch, showed them the data we had and embarked on an audit. The audit was carried out by certification group Control Union and witnessed by WWF Singapore and WWF Malaysia.

We received our certification in 2020. It is vital to us because it created a solid basis for our ESG (Environmental, Social and Governance) narrative. We talk about ESG all the time, and receiving this certification allows us to substantiate what we are trying to do. We are able to showcase the traceability of our system. We use a mass balance approach, where everything is documented, and we can trace everything - right down to the origin of the collected plastics.

The Mass Balance approach is a “chain of custody model” that can be used to track the portion of sustainable material used in a product at the beginning of the production process and the amount allocated in the final product. It is an established concept in the industry. For instance, the mass balance approach has been used for years to show the amount of “organic cotton” used in textiles.

In a similar vein, the mass balance approach can be used to determine the number of recycled plastics in a product. The approach will compare the inputs used, such as plastic waste, with the outputs from the production process. From there, the recycled content used can be calculated. It is a useful tool for companies that need to meet recycled plastic content goals or want to showcase the percentage of recycled content used in their product.

However, there are concerns in the industry on how a lack of regulations in the mass balance approach could lead to greenwashing and harm efforts to promote the circular economy. In light of this, Zero Waste Europe and ECOS, in collaboration with the Rethink Plastic Alliance, put forth 10 recommendations for the development of methods and standards in the mass balance approach.

Heng Hiap has 18 intellectual property patents and one trademark filed [for your plastic recycling technologies]. How do you stay innovative?

We have an in-house research and development team. We are always looking for new methods to reduce labour dependency and most importantly, to enhance, preserve and uncover any hidden properties we can find within plastic scraps. We look at integrating the value chain, and for each part in the chain, there are certain breakthroughs we have achieved, and intellectual properties that we have filed for.

One example is the technology we developed for exporting materials. With this innovation, instead of having five or six different batches of plastic in one 40-foot container, we can now supply just one homogenous batch. This helps to streamline the checking process and ensure production consistency for our customers.

It has helped to differentiate Heng Hiap as a company that is focused on longer-term growth. We also started attracting customers and collaborators who tend to think long term and who can appreciate that it brings value to themselves when working with us. We have created a diversified portfolio that showcases sustainability as our core principle.

What would you recommend for public listed companies to do if they are interested in adopting circular economy principles in their business practices?

I think what is important is that you need to look at things from a sustainability and circularity angle. We are operating in a volatile business environment, with an ongoing pandemic and the Ukraine-Russia war adding to the uncertainties. Businesses tend to become reactive or only think for the short term. But sustainability is a marathon, not a sprint. You must think long term. Adopting a circular economy model requires your team to have an honest conversation and for top management to assess their commitment to change. 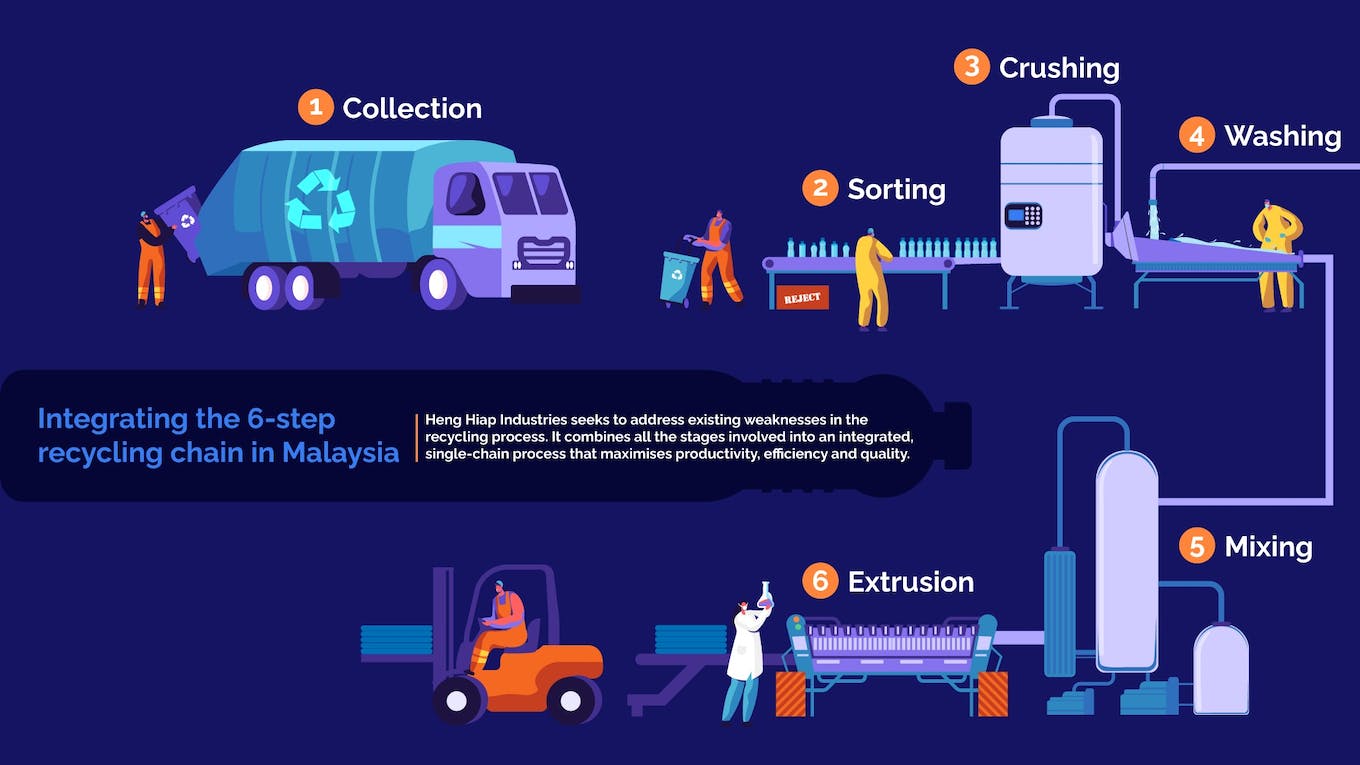 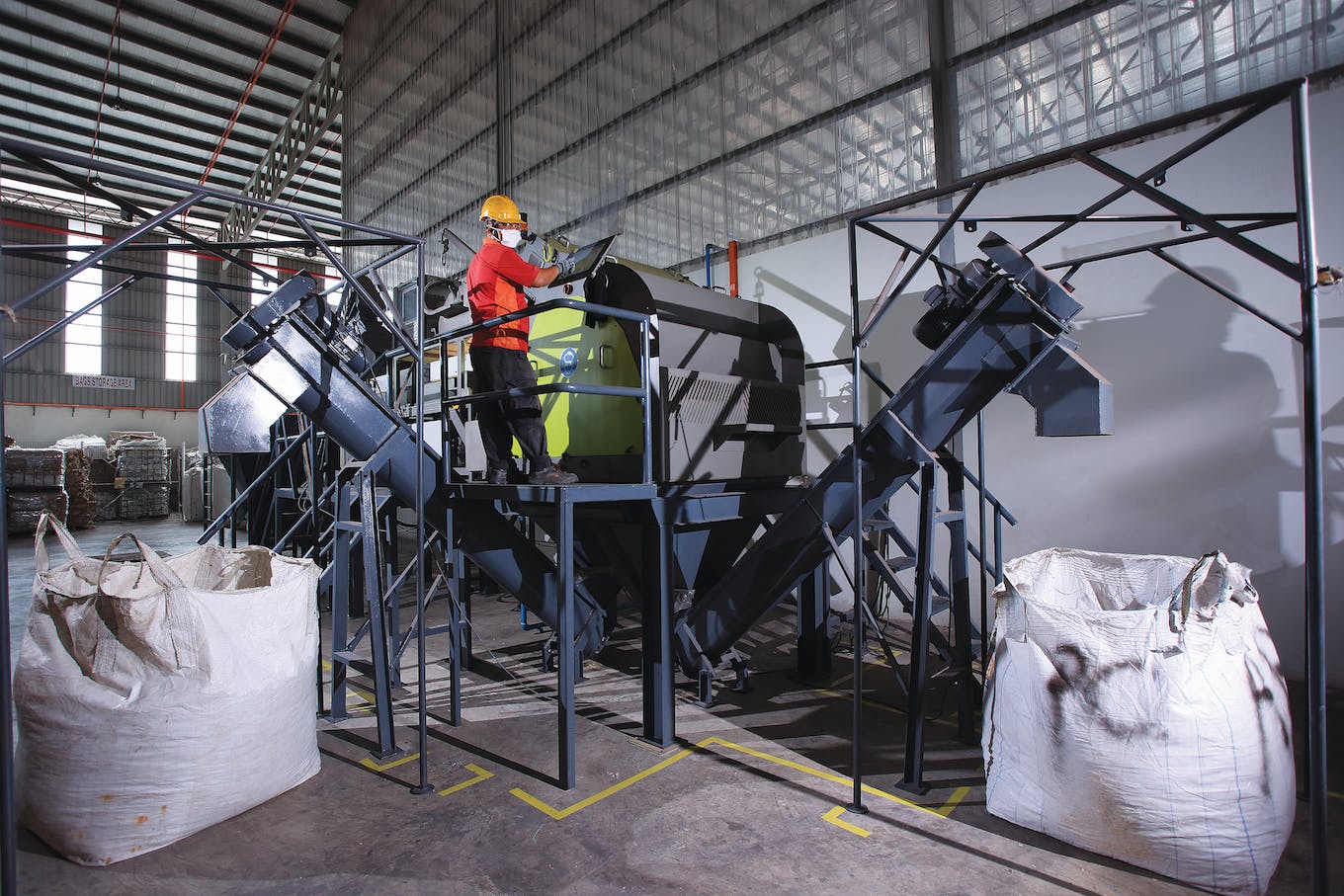 Extrusion is the last stage in plastic recycling. Cleaned and chipped plastic pieces are melted down and shaped into thin noodle-like tubes. The tubes are then cut into small pellets for easy distribution and remanufacturing. Image: Heng Hiap Industries