Big companies donated to climate deniers in Congress—even while claiming to care about climate change. When those same lawmakers denied the results of the election, the bill came due.

At the 2018 UN climate conference in Poland, visitors could watch a virtual forest degrade on a set of screens – and donate, a display said, to help save it.

The installation was sponsored by Visa, a partner of that year’s conference. The Visa logo sat tucked in the corner of the large screens.

Every time a passerby tapped a card reader to make a donation to the UN Climate Adaptation Fund, Visa made a €3 contribution of its own. In total, the display generated around $67,000 for the fund, the company said.

Such gestures speak to Visa’s public commitment to sustainability, but they stand at odds with the company’s history of political donations.

In the 2020 election cycle alone, Visa’s political action committee gave tens of thousands of dollars to lawmakers, like Rep. Blaine Luetkemeyer (R-MO), who deny the urgent need to address the climate crisis.

Not only has Luetkemeyer dismissed climate science, he has sponsored legislation to pull US funding for the UN climate change agency.

By donating to climate deniers, Visa signaled that politicians like Luetkemeyer would face no penalty for ignoring reality.

And just as Luetkemeyer was able to disregard decades of climate research, he was also able to overlook the 61 failed lawsuits challenging the results of the 2020 election.

While top corporations had enabled climate denial for years, election denial proved a bridge too far. After the riot at the Capitol, dozens of companies began distancing themselves from politicians they had previously supported.

Facing pressure from customers and employees, they vowed to freeze — or at least reconsider — donations to lawmakers who had voted to overturn the results of the election. Visa suspended all political donations following the insurrection.

Federal records show how corporate political action committees donated to climate deniers in their most recent election cycles, even while companies openly acknowledged the grave threat posed by climate change.

It was only after those lawmakers attempted to overturn the results of an election that companies were forced to grapple with their donations.

The examples below represent only a small sample of political donations, but they illustrate a pattern of companies giving elected officials permission to deny reality. 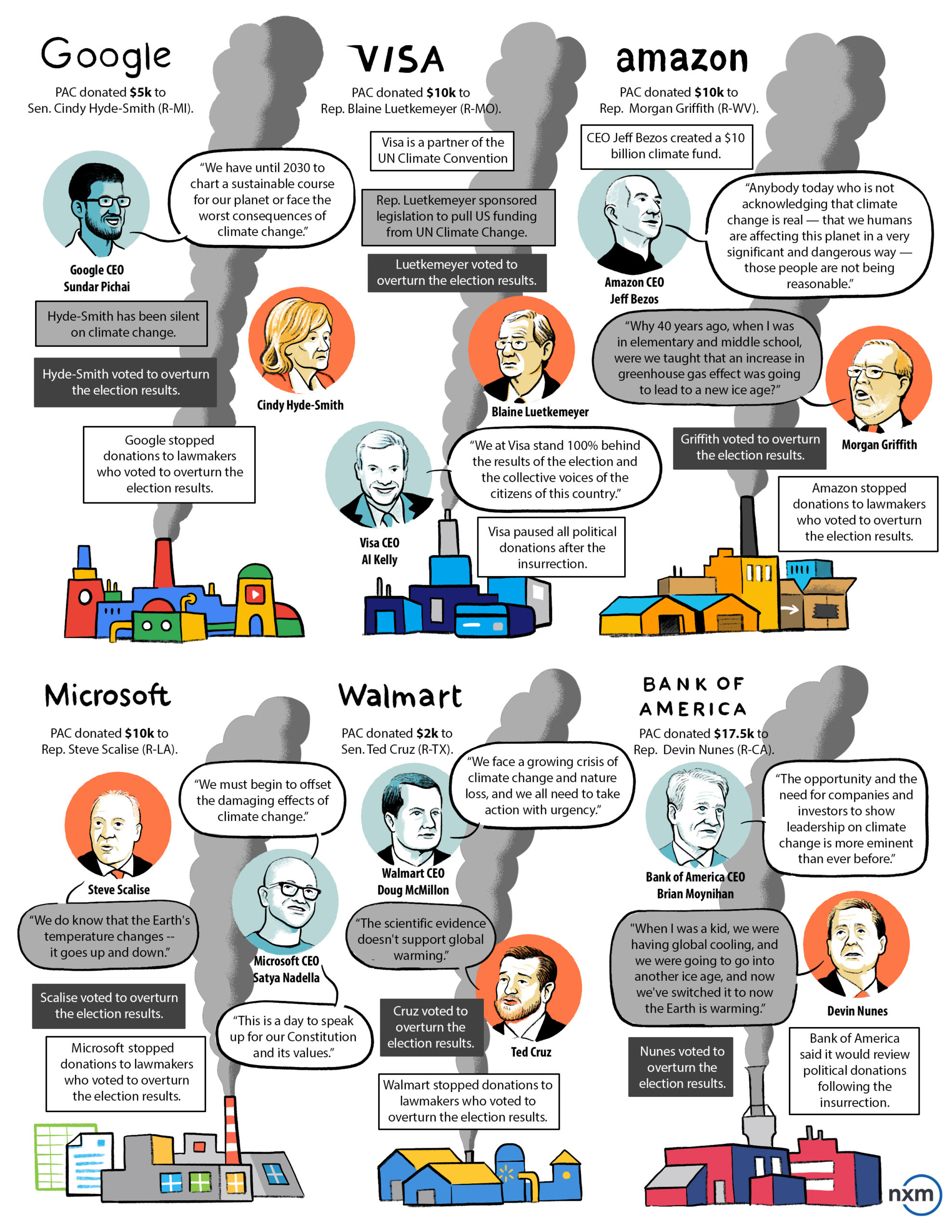 This article was originally published on Nexus Media News under a Creative Commons licence.