How a paper company is restoring tropical forest in Sumatra

Wildlife thrives in one of Sumatra’s largest intact peatland forests, and an unlikely coalition of NGOs and businesses is ensuring it remains that way.

Amid recent reports of an increasing crisis in global biodiversity caused by habitat loss, land conversion for agriculture, climate change and pollution, an ecosystem restoration programme based in Indonesia has reported a win for wildlife.

Called Restorasi Ekosistem Riau (RER), it recorded an increase in its biodiversity list within its forest restoration area in the 150,000ha of peat forest it is restoring on the Kampar Peninsula and Padang Island in Riau Province, Sumatra.

Several species classified as globally threatened by the International Union for Conservation of Nature (IUCN) recorded were found in the area, which is one of the largest remaining Sundaic lowland Tropical peat forests in Sumatra.

According to RER’s recently published Progress Report 2018, the number of unique plant and animal species recorded in the area grew from 717 in 2017 to 759 in 2018, including the critically endangered helmeted hornbill and Sumatran tiger. 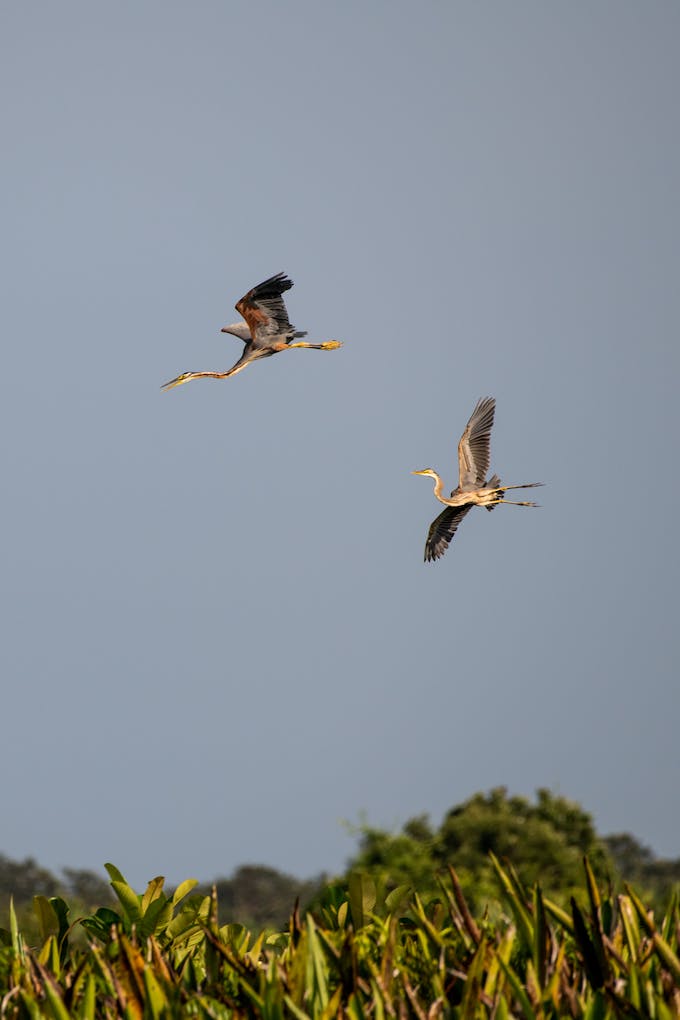 Remarking on progress since RER’s founding, advisory board chair, Bey Soo Khiang, acknowledges the growing global recognition of ecosystem restoration as a strategy to mitigate the impact of climate change and protect biodiversity.

Ecosystem restoration refers to the process of assisting the recovery of a forest area that has been degraded, damaged or destroyed. RER’s model is based on a four-phase approach that works to protect, assess, restore, and manage the area.

“The United Nations’ recent declaration of a Decade of Ecosystem Restoration commencing in 2021, to restore 350 million hectares of degraded land by 2030, sends the strongest signal yet that ecosystem restoration is not only critical to the reduction in global greenhouse gas emissions, it also has a vital role to play as an agent of biodiversity recovery and sustainable development,” says Bey.

Supported by ecosystem restoration licences issued by the Indonesian government for a 60-year period, the restoration area is approximately the size of London. It experienced decades of degradation through commercial and illegal logging by private businesses and local communities, impacting the area’s forest structure and composition of tree species.

Larger trees were taken from the area and networks of canals were built to provide access to locations deep within the peat forest and transport logs. The drainage canals reduced water levels, threatening natural forest growth and increasing the risk of fire.

A place safe from fire, for animals and community

Biological diversity, or biodiversity, describes the range and variation of life in an ecosystem, and is an important measure of a healthy functioning ecosystem that is resilient enough to respond to environmental change.

The RER programme keeps track of the level of biodiversity and wildlife count in the area through continuous monitoring from camera traps, observations from ground patrols and systematic surveys conducted by teams looking for animal tracks and markings. 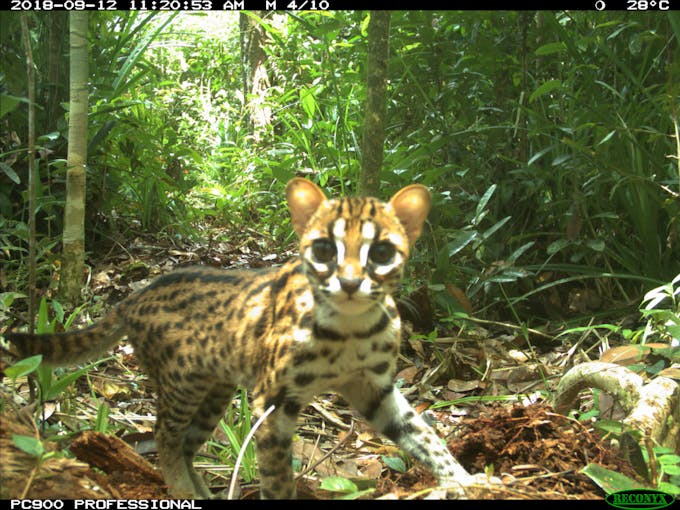 The leopard cat (Prionailurus bengalensis) was one of the cat species captured by camera trap in 2018 in the RER area. Image: APRIL

The area’s remarkable bird life continues to flourish, and the ongoing monitoring programme revealed that 304 bird species are now present in the area, up from the 128 species previously identified by BirdLife International’s Important Bird Area report. Among the species found in the area are the critically endangered the white-winged duck (Asarcornis scutulata) and Storm’s stork (Ciconia stormi).

Last year was the fourth fire-free year inside the restoration forest area, which RER’s report credited to direct engagement with neighbouring communities to implement fire prevention programmes, as well as daily patrols to also engage with forest users and fishermen to ensure they do not use fire for land-clearing activities.

Hydrological restoration, involving canal blocking to restore ground water levels to allow the forest to thrive, was another area of progress in 2018 with 30 dams constructed. This allowed the closing of 13 canals, stretching a total of 45.6km.

To date, 21 canals totaling 65.4km have been closed with 53 dams built. Blocking canals is vital work as it helps limit water loss from peatland, especially during dry seasons, that in turn supports the regeneration of healthy forest cover. 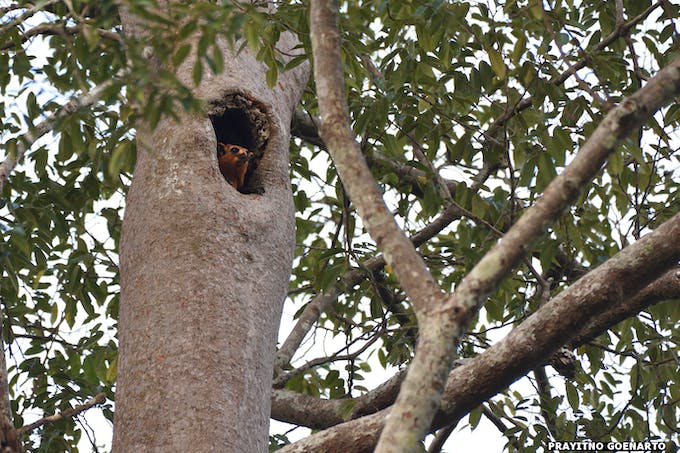 A giant red flying squirrel peeks out of its home in a tree. Image: APRIL

At the same time, over 6,700 natural seedlings from 70 different tree species were planted across 58ha of degraded forest during 2018, bringing the total replanted area to 88.5ha.

The progress report also highlights work with communities living near the restoration area. During the year, the restoration programme supported eight community groups to maintain and create no-burn vegetable farms, as well as piloting a catfish aquaculture programme on Palau Padang. The first fish harvest in September 2018 generated additional income for the community.

RER advisory board chairman Bey commented: “Over the past five years, we have collectively assembled a wealth of insight and knowledge. This head-start provides us with an opportunity to share [with the world] our experience, specifically in relation to peatland hydrology restoration and carbon measurement, and engaging communities as restoration partners”.

“Through communication and knowledge sharing we hope we can contribute to a global programme of lasting significance,” he added. Taking a consultative approach ensures that land managers, decision makers and local communities are part of the process of design, conservation target setting and implementation.” 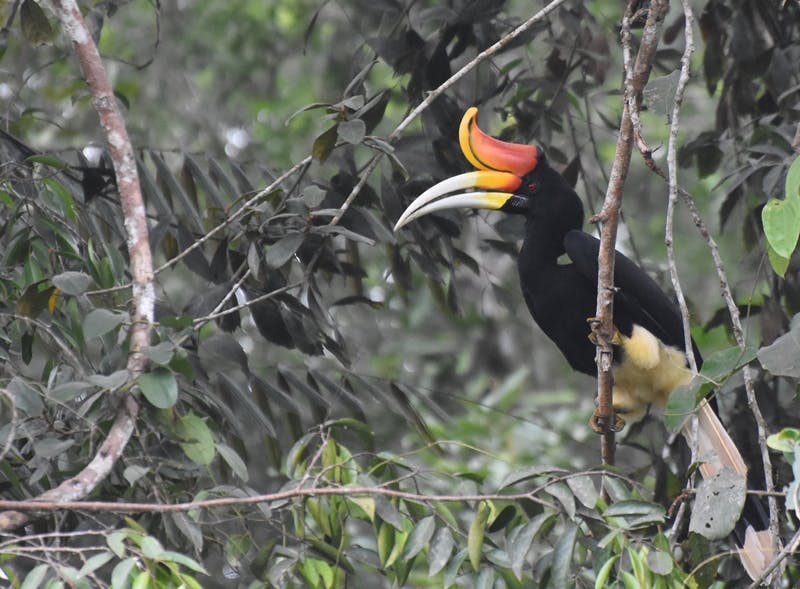 A photo of a Rhinoceros Hornbill, native to the peat forests of the Kampar Peninsula and Padang Island in Riau Province, Indonesia. Image: APRIL