Has KFC found the secret sauce to circular packaging?

Fast food giant KFC and packaging company TRIA are testing a concept in Singapore which they say combines sustainability and convenience.

Fast food restaurants are big waste generators. However, the lack of viable sustainable alternatives to single-use plastic and the industry’s emphasis on cost and convenience means cheap, disposable foodware will be on their menus for some time yet.

In a six-month trial, one KFC restaurant in Singapore will switch its non-recyclable boxes, cups and cutlery to those made from NEUTRIA, a rapidly degrading plant-based polyester developed by TRIA. The used packaging will be collected by TRIA and fed into their patented Bio24 digester, which turns it into compost within 24 hours.

Conventional plastic recycling faces many challenges in Singapore. Even if the food packaging is technically recyclable, segregating and cleaning it could potentially cost five times more than producing new packaging from scratch. Furthermore, most of the country’s plastic is incinerated. With little incentive to recycle or reduce plastic consumption, plastic waste is only expected to increase. Since 2017, plastic recycling rates have remained extremely low, usually hovering around 4 - 6 per cent.

TRIA claims its product can remain relatively cost-competitive without compromising on sustainability. However, apart from ensuring the product’s economic viability, TRIA’s chief executive Ng Pei Kang says that sustainable foodware companies must give higher priority to their F&B partner’s operational needs if they are to make such packaging more widely accepted.

“I think it’s great that we are experimenting with [sustainable foodware like reusable cups], but we also need to empathise more with the food brands. How can KFC extend this to the 20,000 outlets they own without changing their operations? [With our model], they don’t need to hire more people or get new trash bins. If it’s not business as usual, it would be very tough [for restaurants to accept these new packaging products].” Ng said in an interview with Eco-Business.

During the pilot launch event at Shanaya Environmental Services on 21 June, KFC revealed that cost-competitiveness, design flexibility and operational resilience were some of the main factors which attracted them to TRIA’s product.

“Since 2017, we’ve been looking for new ways to reduce our use of non-recyclable packaging. We’ve previously considered edible spoons, but they could not meet our cost or operational requirements. However, TRIA was open to extensive redesigns and testing to ensure their product could withstand our daily operating needs and be collected and processed at an acceptable price point,” said Lynette Lim, general manager of KFC in an interview with Eco-Business. 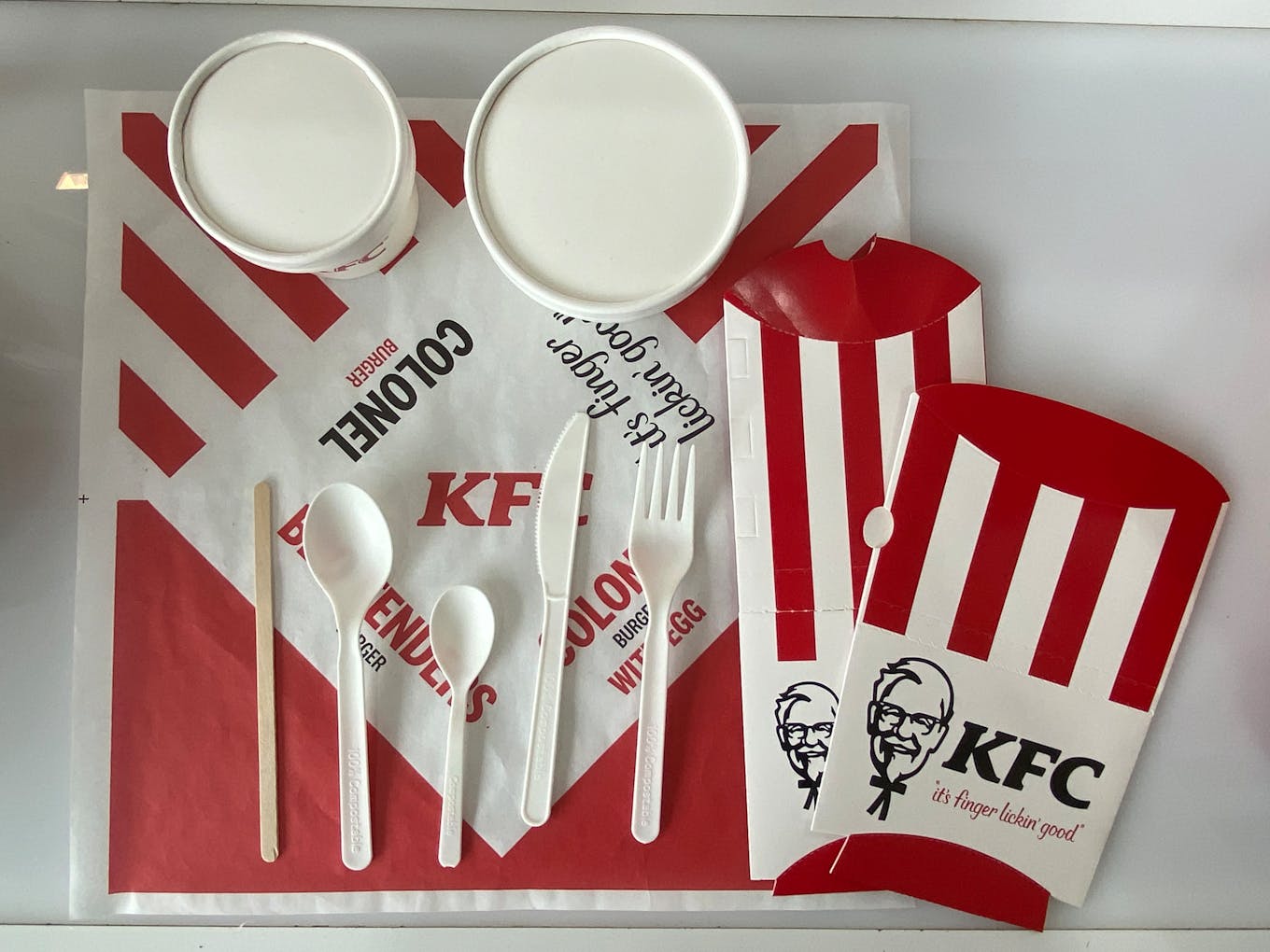 The mashed potato/coleslaw cup, cutlery, pockets and mat made of NEUTRIA by TRIA for their 6-month pilot with KFC. Image: Eco-Business

Redesigning KFC’s mashed potato and coleslaw cup was particularly difficult for TRIA’s designers. Using the company’s plant-based material, the cup had to maintain its structural integrity when stacked, in addition to being heat and moisture-resistant. While it has yet to be tested in store conditions, Lim cited this as an example of TRIA’s commitment to KFC’s operational standards.

For every tonne of NEUTRIA and food waste fed into the digester, TRIA claims that 200 - 300kg of compost can be produced. While the company has not yet secured an offtake agreement for its compost, it has signed memorandum of understandings (MOUs) with local rooftop farming company Comcrop, and Norwegian chemical and fertiliser company Yara International. Ng also highlighted how TRIA’s products and services can help these companies achieve their own business goals in a more profitable and sustainable way.

“Yara is looking to expand their regional presence here, and I think they are interested in our product because it could be a low-carbon source of fertiliser. In Europe, they have access to hydroponic power, which allows them to profitably produce low-carbon, green fertiliser. However, shipping this fertiliser to Asia is not realistic. That’s where we come in,” Ng explained. 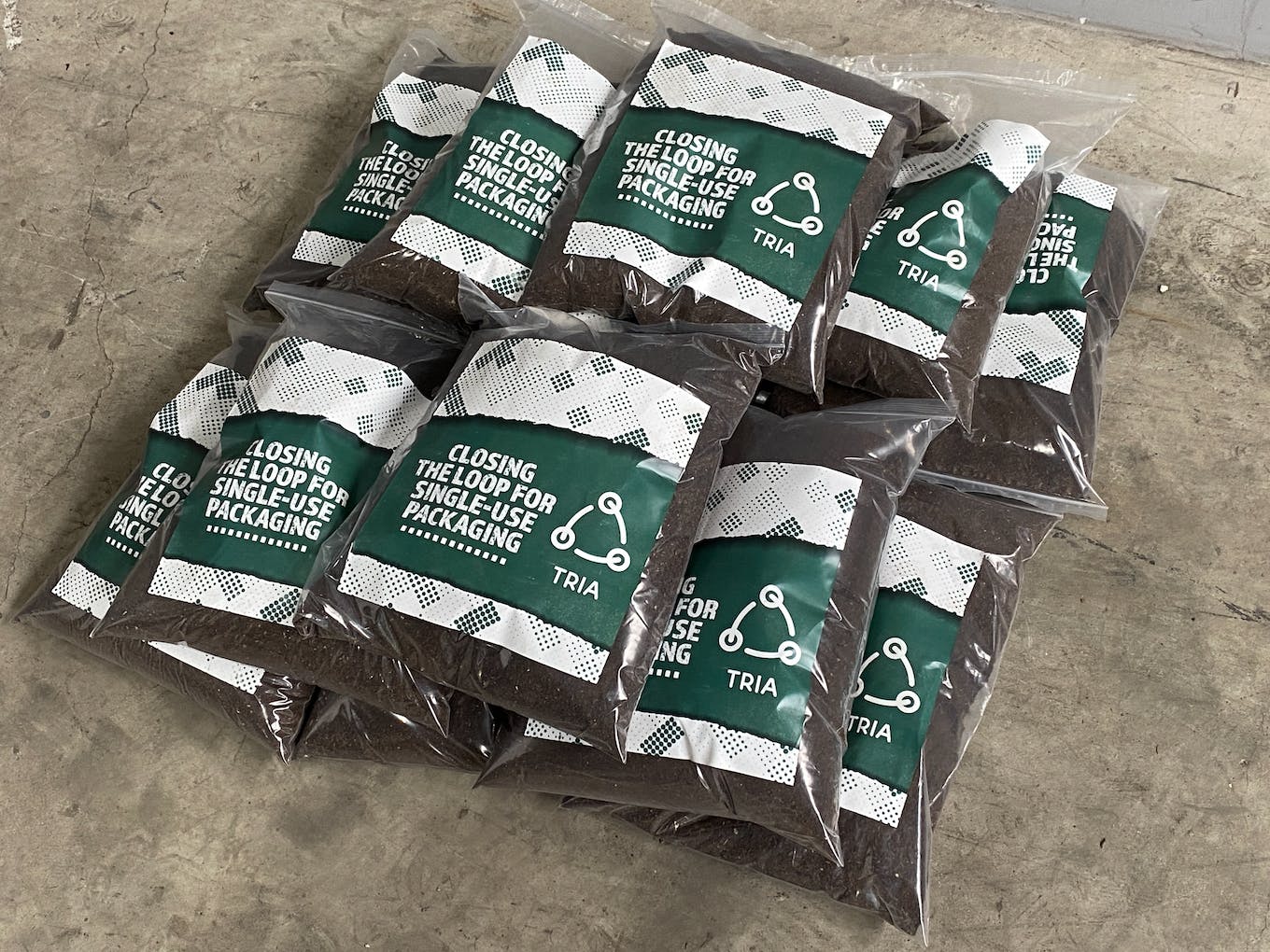 Finished bags of compost made from NEUTRIA packaging and food waste. Image: Eco-Business.

In an upcoming bio-valorisation pilot, Yara hopes to produce bio-equivalent fertiliser from TRIA’s compost. Upon receiving TRIA’s product, Yara could theoretically adjust its nitrogen, potassium and phosphorus content to ensure that it is nutritionally equivalent to commercial fertilisers. Other than reducing costs, the closed-loop system allows the fertiliser to be traced, therefore building greater confidence in prospective buyers.

However, TRIA’s technology is not without drawbacks. The composting system hinges on TRIA’s ability to take ownership of and reprocess its post-consumer waste. Singapore is planning to introduce an extended producer responsibility (EPR) law for packaging by 2025, which could reduce public expenditure and the amount of waste sent to landfills. Nevertheless, Professor Seeram Ramakrishna, a mechanical engineering professor and chair of the National University of Singapore’s (NUS) Circular Economy Taskforce pointed out that achieving EPR has its difficulties.

What is extended producer responsibility (EPR)?

EPR is a policy approach where producers are given significant financial and/or physical responsibility for the treatment and disposable of post-consumer products.

“For EPR to work effectively, the presence of good waste management systems must be in place, including infrastructure to reprocess the waste. There should be a high level of compliance and enforcement,” explained Ramakrishna.

While Ng is confident TRIA can handle KFC’s in-store waste, he admitted that a system for managing takeway waste remains elusive for now.

“Takeaway waste will still be sent to the public waste management system. However, the majority of packaging is used for dine-in purposes, and that’s where we are able to help,” Ng said.

In a previous interview with Eco-Business, Ng also professed that sourcing top talent for the sustainable food packaging industry remains a challenge. Furthermore, the hygiene and economic concerns of the pandemic have slowed the appetite for innovative new technologies like TRIA’s, he said. However, he stated that a partnership with one of the world’s most recognisable brands was an important step towards a circular packaging economy.