Two-thirds of humanity now recognises climate change to be a serious issue, which could be affecting the willingness of people to start a family. Indonesia is one place where climate change is not putting people off having kids.

The intensifying effects of climate change could be applying the brakes to human population growth.

Four in 10 people globally are not keen on bringing children into a world of climate chaos, according to a global study published on Friday by pollster GlobeScan.

In Asia, those from South Korea  (59 per cent), Hong Kong (53 per cent), India (52 per cent) and Thailand (51 per cent) agreed that they do not want to have children because of the effects of climate change. 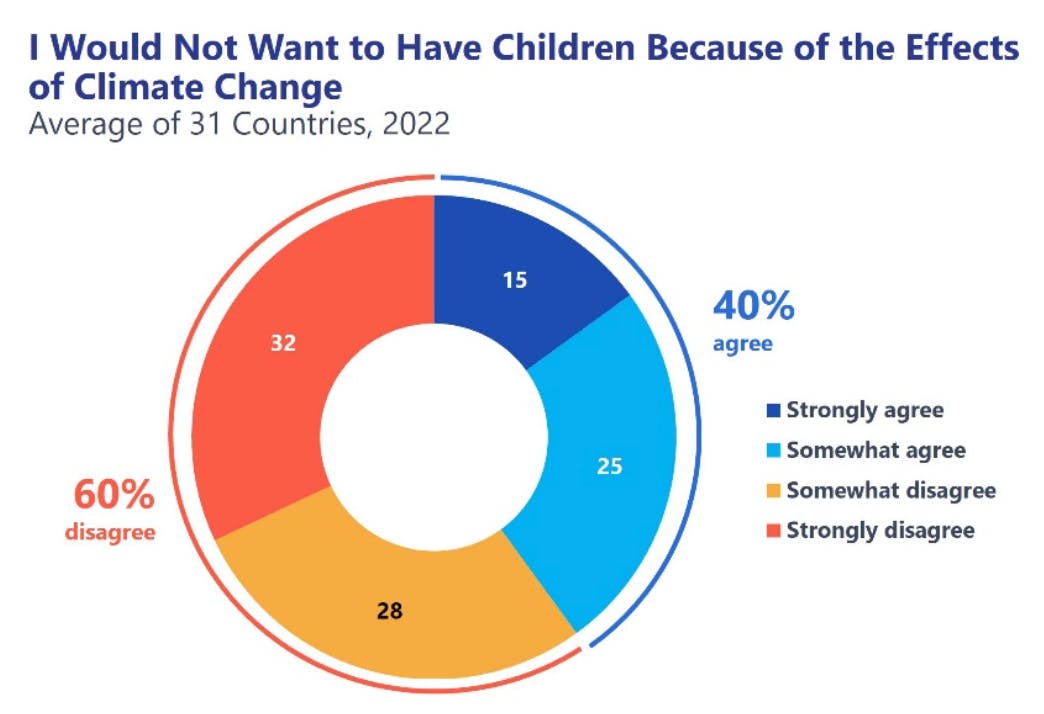 “I don’t want to have children because of the effects of climate change” – average across 31 countries [click to enlarge]. Source: GlobeScan

Indonesia is a clear outlier in the study. People in the populous Muslim-majority Southeast Asian nation are the least likely to be deterred from starting a family because of climate calamity.

Almost a third (32 per cent) of people globally strongly disagree that the impacts of climate change will put them off having children.

Not having children – or delaying childbearing by family planning and educating girls – is one of the most powerful individual actions people can take to tackle climate change, according to Project Drawdown, a non-profit that ranks the impact of individual actions on emissions. 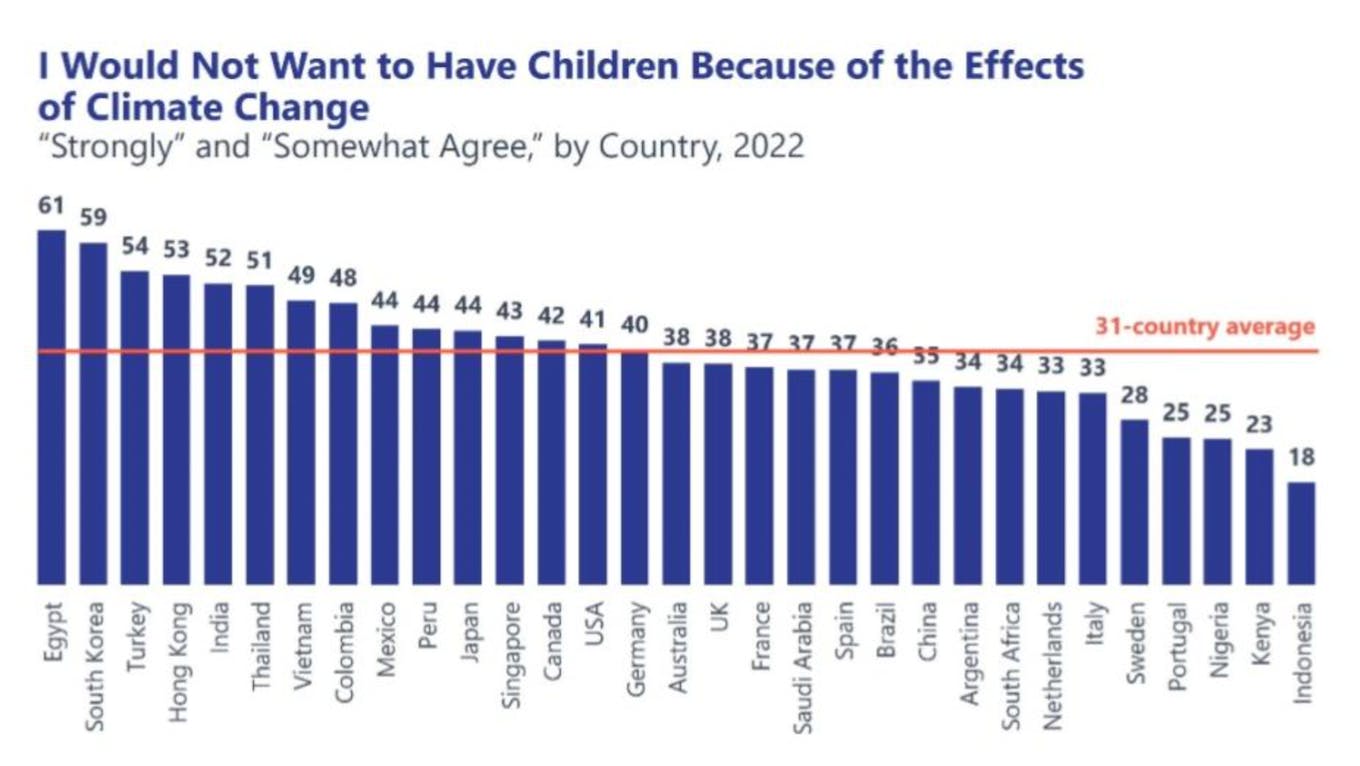 GlobeScan’s study found climate anxiety has reached record levels as more people feel the effects of global warming personally; 65 per cent of people around the world now say that climate change is a “very serious” issue – the highest level recorded since tracking began in 2002.

The number of people who say they are “greatly affected” by climate change has also reached record levels, up to 37 per cent from 31 per cent in 2020. 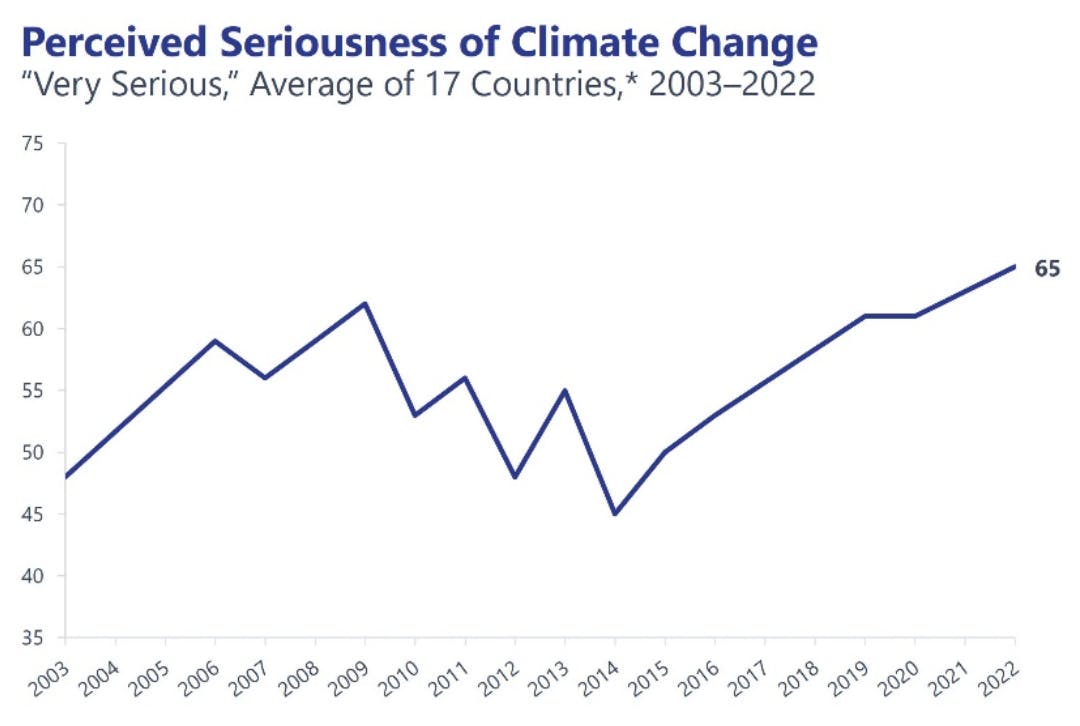 Perceived seriousness of climate change from 2003 to 2022. Source: GlobeScan

The poll was conducted in June and July of 2022, at a time of heavy rains and flooding in Pakistan and China, landslides in Bangladesh and India, wildfires in Afghanistan and Turkey, and extreme heat in the United States and Europe.

“These personal impacts of climate change, as they grow, are clearly contributing to the sense of people that the future will be less positive than it is now and they are fearful to have children in a world that is affected by extreme weather and its consequences, like food insecurity,” he told Eco-Business.

The research affirmed the belief that low-income families – people who have done the least to contribute to climate change – will suffer the most from its impacts; 85 per cent of respondents globally said poor people will suffer most, with Americans the least likely (74 per cent) to believe this.

The report’s authors said that acute and growing awareness of climate injustice would be a key factor in pushing for tougher climate action from governments and business.

Correction: the previous headline ‘One in four people don’t want to have children as climate anxiety reaches record levels’ has been updated with the correct data.