While the world's media is focused on the Covid-19 pandemic, northern Thailand has been experiencing the worst forest fires in decades with indigenous peoples at the forefront of the fire management efforts.

While the world’s attention has been focused on the Covid-19 pandemic, northern Thailand has been experiencing the worst forest fires in decades. Already raging since mid-March, the fires are projected to continue well into May.

With the news of the pandemic dominating international media, the choking fires have gone under the radar even despite the “critical levels” of air pollution in Chiang Mai.

Some areas of Chiang Mai province have hit levels of PM2.5, particulate matter that penetrates deep into the lungs, of up to 592 microgrammes per cubic metre (ug/m3) of air, almost 12 times above levels considered safe to breathe by the World Health Organisation.

Thai space agency, Geo-Informatics and Space Technology Development Agency (GISTDA) reported that as of 30 March 2020, there were 3,809 hotspots in Thailand and 398 of them were found in Chiang Mai alone.

It is unclear exactly how much forested area has been affected by the fires, but experts estimate that around 20 per cent of the total forest area in northern Thailand has been destroyed so far.

“[The government response] is not enough because the forest area is very large. Without the support of the local people, they can’t get the forest fires under control.”

With rain falling on some parts of Chiang Mai over the last two days, authorities say that the situation is under control now. But to date, Chiang Mai still remains the fourth most polluted city, according to the live air quality tracker IQ Air AirVisual.

Siwakorn Odochao, community coordinator of the indigenous Karen community, told Eco-Business that the fires are unpredictable and may start again in the same area even after they are extinguished.

Odochao coordinates people across four districts with over 50 villages that work together and share resources such as information about the fires and donations from non-government organisations. These four districts have not received any rain since December, and still do not see any signs of incoming rain.

The causes of the fire are highly complex, but seem to encompass a combination of the burning of land for commercial crops, persistent dry conditions exacerbated by climate change, arsonists driven by internal conflict in national parks, and a few mushroom foragers.

Some attribute the fire to slash-and-burn practices by farmers who clear land for planting crops and to rear livestock. But there is an important difference between farmers who practice modern agriculture and those who practice traditional agriculture, stressed Chayun Vaddhanaphuti, director of the Regional Centre for Social Science and Sustainable Development, Chiang Mai University.

“There are two groups of villagers. The first do not live in the forests, and burn maize fields to grow commercial crops. The second are subsistence farmers who practice shifting cultivation,” explained Vaddhanaphuti.

He added that the subsistence farmers have yet to start their burning season this year, and are not the culprits of the current forest fires.

Distinguishing between the two groups is also important as the latter comprises the indigenous peoples who live in the forests and have been an active part of the forest fire management efforts.

Another speculated theory is that the fires could be deliberately set by arsonists due to internal conflict either among the national park authorities in an attempt to gain attention and aid, or between the authorities and villagers.

The stance of villagers deliberately burning the forests is echoed by the government, which has since prosecuted six people in March for starting forest fires.

With the main aim of easing air pollution, the government has put in place more stringent measures to control forest fires in several parts of Chiang Mai.

Earlier this month, local authorities ordered the closure of the forested areas of Doi Suthep and Doi Pui, the national park areas where the fires are believed to have started.

According to the government, they have ordered soldiers, police and other relevant officials to patrol the mountains, and put helicopters on standby to respond to emergencies and control the fires by dousing water.

“This is not enough because the forest area is very large. Without the support of the local people, they can’t get the forest fires under control,” said Vaddhanaphuti.

Odochao added that the firefighters take over an hour to arrive at the village once the call is made, and are exhausted even before they begin their ascent into the mountainous terrain where the forest fires are.

“They don’t know the area well, send few firefighters, and get tired. We don’t have much hope for help from the government,” said Odochao.

Indigenous peoples on the frontlines 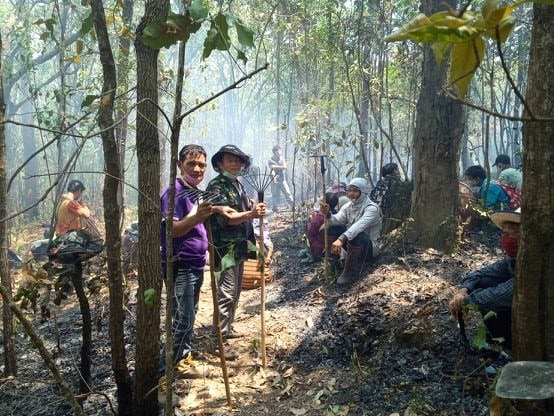 Limited resources from the government have put indigenous peoples at the forefront of the fight against the forest fires. The whole village is involved in the efforts to stop the fires once they are detected.

“One person per family goes to participate. In our village alone, we have 120 households. So multiply that by 12, and that number covers just one district,” said Odochao.

Equipped with leaf blowers, axes and knives to create fire breaks, the villagers sometimes spend a whole day and night trying to put out the fire.

Even after the fires die off, the villagers spend days patrolling and observing the area as the fires often come back due to the intense heat in the soil and burnt wood, Odochao explained.

But despite their best fire-fighting efforts, five indigenous peoples have passed away due to smoke inhalation and high temperatures of the fire.

“We have been managing the forest fires for many years, and this year we do the same. But the fire is too strong this year, and we have lost our people,” Odochao said.

“Not all fires are bad”

There are two opposing schools of thought—the government and urban dwellers that believe a ‘zero-burn policy’ is the answer to haze and deforestation, and the indigenous peoples who believe that fire is an essential part of sustainable forest conservation.

“Not all fires are bad, the people who live in the mountains use fire for two reasons. The first is a counter fire measure, to stop uncontrollable forest fires from happening. The second is to do their shifting cultivation for their own consumption,” said Vaddhanaphuti.

The zero-burn policy results in an accumulation of dry matter that could lead to uncontrollable forest fires with even the slightest spark. In order to prevent this, the indigenous peoples start smaller, controlled fires to burn off all the excess dry leaves and grass.

This forest fire prevention method is not unlike that used by the Australian Aboriginal people, and originates from longstanding knowledge about the land they inhabit.

Vaddhanaphuti is also vice-chairman of the Chiang Mai Breath Council, a coalition of businesses, state officials, activists and local villagers that advocate for joint planning and decision-making between the government and local people.

As the people who live in the forests are directly affected by forest and fire management decisions, the coalition believes in the combination of both local knowledge and scientific methods to solve the problem of forest fires.

Odochao also called for longer term solutions that include local wisdom and knowledge of forest management in universities’ curriculae to bridge the knowledge gap between urban and forest dwellers.