Celebrated Filipina social entrepreneur and farmer Louise Mabulo took to social media on Thursday to recount how Nuseir Yassin, founder of the Nas Daily media company, went to her hometown in Bicol two years ago to feature her work with farmers, only to belittle them and their culture, saying news about them was not “clickable viewable content.”

Yassin is a Palestinian-Israeli vlogger who has gained fame among social media users through the daily posting of one-minute videos he made in his journeys to places like Armenia, Senegal, Sri Lanka, with his most popular video being about the shrinkage of the Dead Sea, which has about 70 million views on Facebook.

Mabulo, founder of Cacao Project which won the United Nations Environment Programme award in 2019 for her initiative to improve the livelihoods of farmers in the Bicol region, said she decided to speak out amid recent news involving Yassin and indigenous tattoo artist Whang-Od.

Yassin drew criticism online on Wednesday after his digital learning platform, Nas Academy, was accused of offering a traditional tattooing course by Whang-Od, despite the artist’s grandniece and protégé Gracia Palicas saying that the artist did not consent, citing the course as a “scam” that took advantage of their culture.

On the same day, Nas Academy insisted that Whang-Od agreed to be listed as one of the experts of the course, even posting a video showing the centenarian seemingly affixing her thumbprint to a contract. The supposed contract is now under investigaton by the National Commission on Indigenous Peoples.

People like Nas Daily are the new wave of colonialism in today’s world … and I’ve been silent since 2019, but I cannot for the life of me sit silently any longer over this.

“I should have known better, that this man was exploitative and fueling a neocolonialist narrative using our need for foreign validation,” wrote Mabulo in a Facebook post.

“I’ve stayed silent because I knew that I would face backlash for calling out on this man … And now, he has overstepped and had the audacity to do the same to Whang-Od and the Butbot Tribe. Yet I still see Filipinos defending Nas despite the statements from Gracia, a fully able bodied representative of her tribe and of Apo Whang-Od, our most revered and iconic artist.”

Mabulo said that Yassin’s refusal to take down the course until Palicas took her post down is “a clear sign of systematic silencing, and the hope that they want to continue their money-making from our culture.”

Yassin’s response to the issue by showing Whang-Od signing a contract was the same strategy colonisers used to mislead indigenous people to sell off their land, except now in the 21st century, it was data, content, and tradition being sold, Mabulo added. 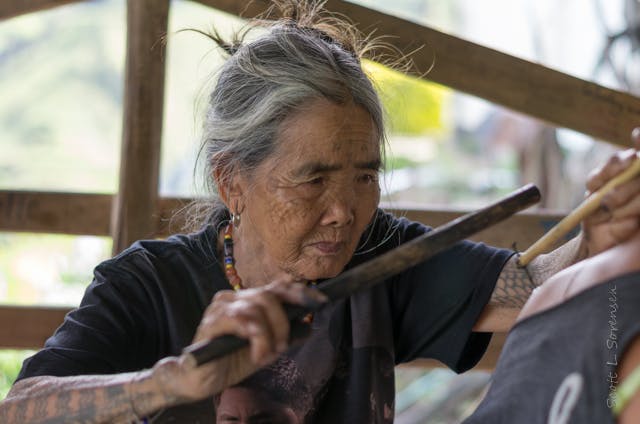 Whang-Od is known as the last mambabatok or Kalinga tattooist  from the tribe of Butbut in Buscalan, Kalinga. She has been tattooing for the past 80 years. Image: Wikimedia Commons

“Filipinos should stand together on this. We are not content to be exploited. We are not culture to be capitalised. We are not people to be romanticised. Or poverty to set the scene for ‘Benevolent Saviors’. We are more than what the world thinks of us,” said the twenty-one year old who was featured on the 2020 Forbes 30 Under 30 Asia list, an annual roster of emerging business and industry leaders in the region.

“People like Nas Daily are the new wave of colonialism in today’s world … and I’ve been silent since 2019, but I cannot for the life of me sit silently any longer over this.”

The allegation that we made derogatory comments is strictly not true. No such words have been said. We have a history of supporting local populations wherever we go.

The allegations have triggered tit-for-tat rebuttals. Fueling the online brawl, Yassir responded to Mabulo by saying that he and his team pesonally flew to Bicol from Singapore to see how she “revolusionised cacao industry in the province”, as Cacao Project claims to have done.

But upon arriving at her hometown he said there were no cacao trees that were not directly owned by the founder, no evidence of education programmes or actual work on the ground.

“The allegation that we made derogatory comments is strictly not true. No such words have been said. We have a history of supporting local populations wherever we go. That’s why we visited her province in the first place,” Yassin said in an email to Eco-Business.

“We came to the conclusion that the project is a fraud and it’s both politically and financially motivated. All three members of the video team who were on the ground have publicly expressed the same view, including locals,” he added.

Nas Daily currently has about 20 million people following its main Facebook page and 850,367 following its Filipino site, although the platform’s followers reportedly dropped at the height of the online controversy.