Electronic waste is recycled in appalling conditions in India

In India, a network of informal workers and waste pickers involving women and children collect, dismantle and recycle e-waste under dismal work conditions.

The world produces 50 million tonnes of electronic and electrical waste (e-waste) per year, according to a recent UN report, but only 20 per cent is formally recycled. Much of the rest ends up in landfill, or is recycled informally in developing nations.

Read more: Does not compute: Australia is still miles behind in recycling electronic products

India generates more than two million tonnes of e-waste annually, and also imports undisclosed amounts of e-waste from other countries from around the world—including Australia.

We visited India to examine these conditions ourselves, and reveal some of the devastating effects e-waste recycling has on workers’ health and the environment. 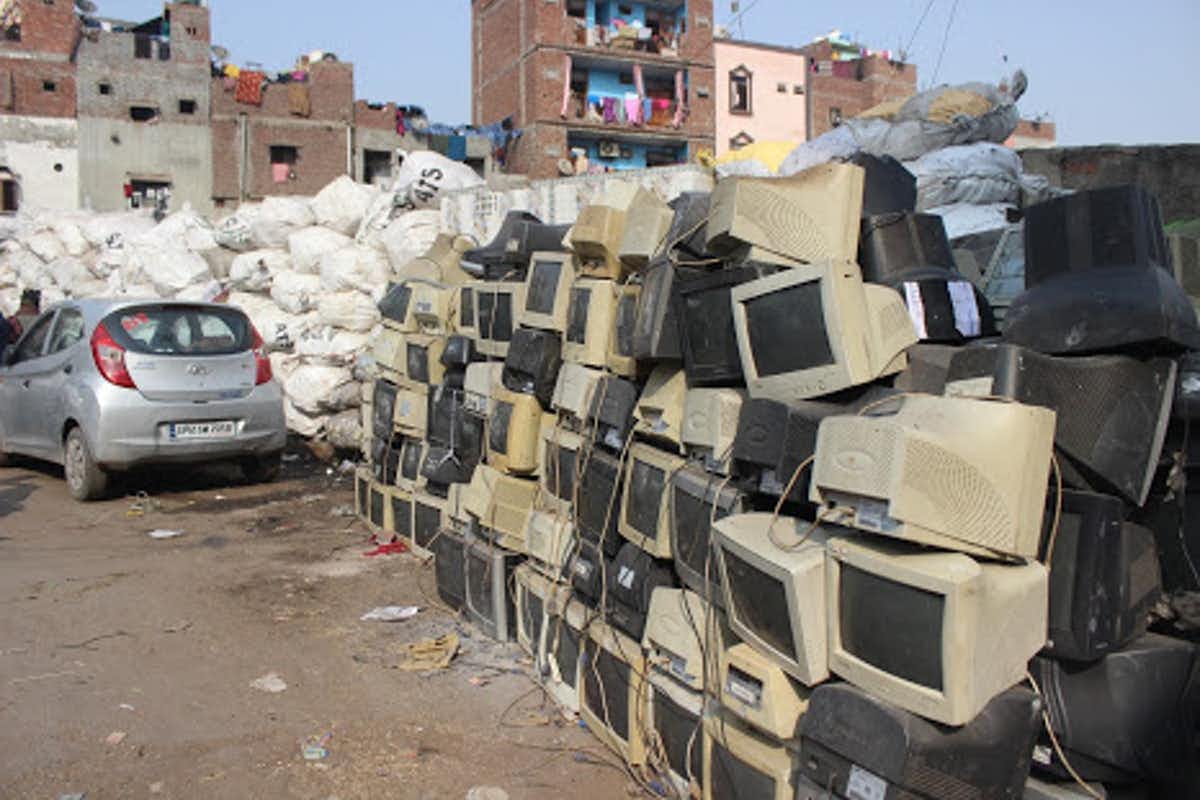 More than 95 per cent of India’s e-waste is processed by a widely distributed network of informal workers of waste pickers. They are often referred to as “kabadiwalas” or “raddiwalas” who collect, dismantle and recycle it and operate illegally outside of any regulated or formal organisational system. Little has changed since India introduced e-waste management legislation in 2016.

We visited e-waste dismantlers on Delhi’s outskirts. Along the narrow and congested alleyways in Seelampur we encountered hundreds of people, including children, handling different types of electronic waste including discarded televisions, air-conditioners, computers, phones and batteries. 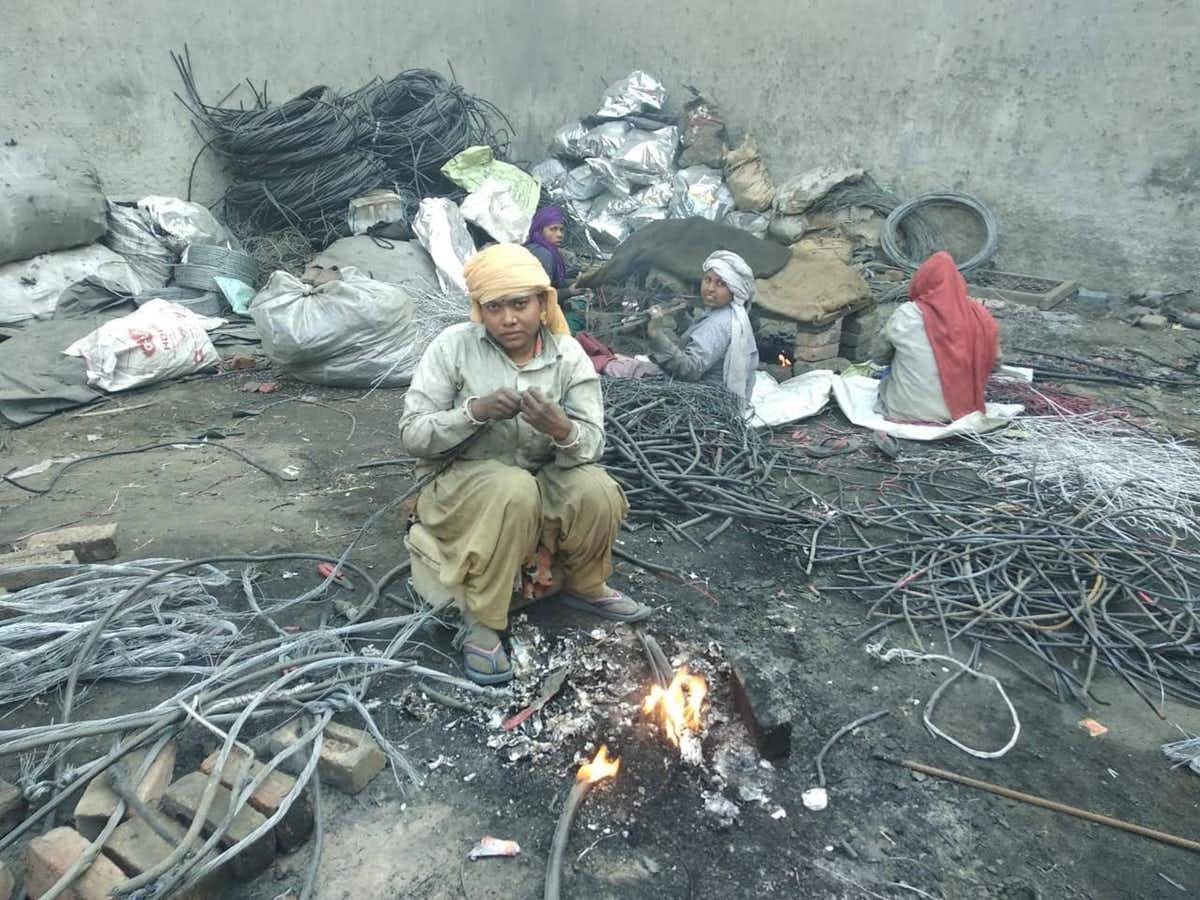 Squatting outside shop units they were busy dismantling these products and sorting circuit boards, capacitors, metals and other components (without proper tools, gloves, face masks or suitable footwear) to be sold on to other traders for further recycling.

Local people said the waste comes here from all over India. “You should have come here early morning, when the trucks arrive with all the waste,” a trolley driver told us.

Seelampur is the largest e-waste dismantling market in India. Each day e-waste is dumped by the truckload for thousands of workers using crude methods to extract reusable components and precious metals such as copper, tin, silver, gold, titanium and palladium. The process involves acid burning and open incineration, creating toxic gases with severe health and environmental consequences.

Read more: Almost everything you know about e-waste is wrong

Workers come to Seelampur desperate for work. We learned that workers can earn between 200 and 800 rupees (A$4-16) per day. Women and children are paid the least; men who are involved with the extraction of metals and acid-leeching are paid more.

Income is linked to how much workers dismantle and the quality of what is extracted. They work 8-10 hours per day, without any apparent regard for their own well-being. We were told by a local government representative that respiratory problems are reportedly common among those working in these filthy smoke-filled conditions. 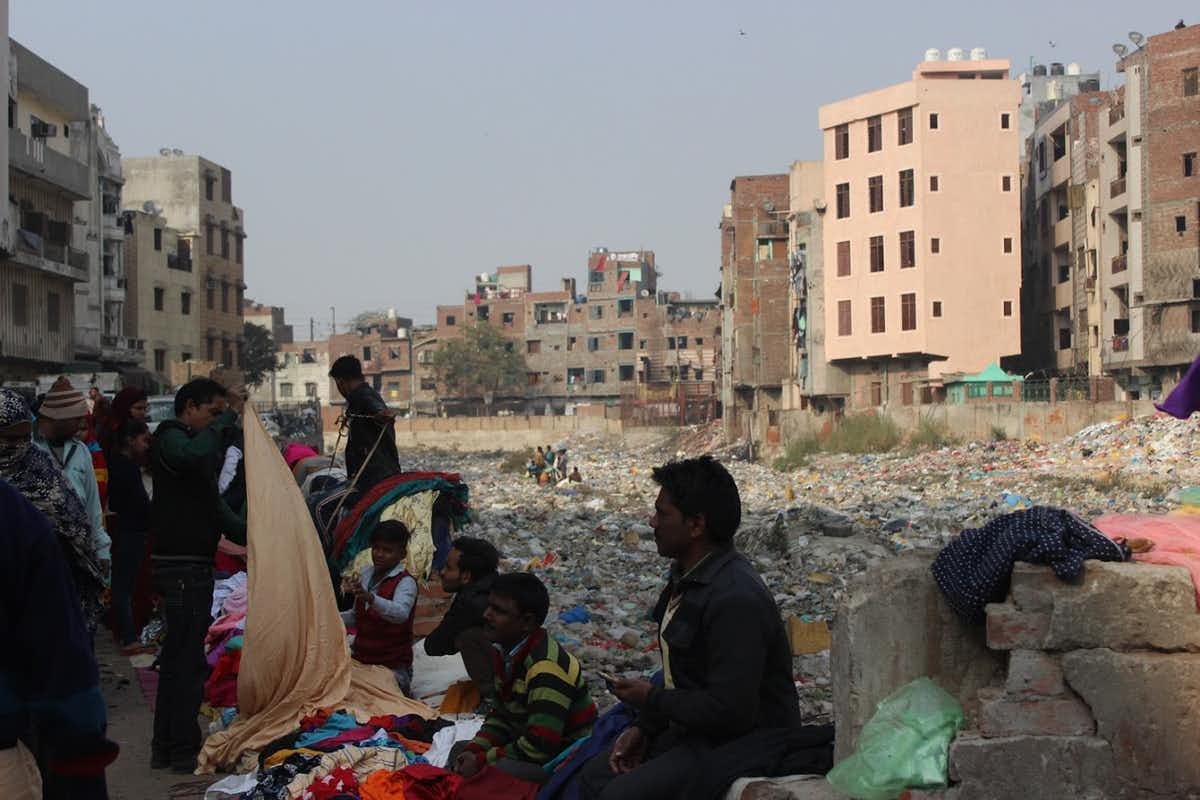 Delhi has significant air and water pollution problems that authorities struggle to mitigate. We were surprised to learn that the recycling community does not like to discuss “pollution”, so as not to raise concerns that could result in a police raid. When we asked about the burning of e-waste, they denied it takes place. Locals were reluctant to talk to us in any detail. They live in fear that their trade will be shut down during one of the regular police patrols in an attempt to curb Delhi’s critical air and water problems.

Read more: As another smog season looms, India must act soon to keep Delhi from gasping

As a result of this fear, e-waste burning and acid washing are often hidden from view in the outskirts of Delhi and the neighbouring states of Uttar Pradesh and Haryana, or done at night when there is less risk of a police raid.

Incidentally, while moving around Seelampur we were shocked to see children playing in drains clogged with dumped waste. During the drier months drains can catch fire, often deliberately lit to reduce waste accumulation. 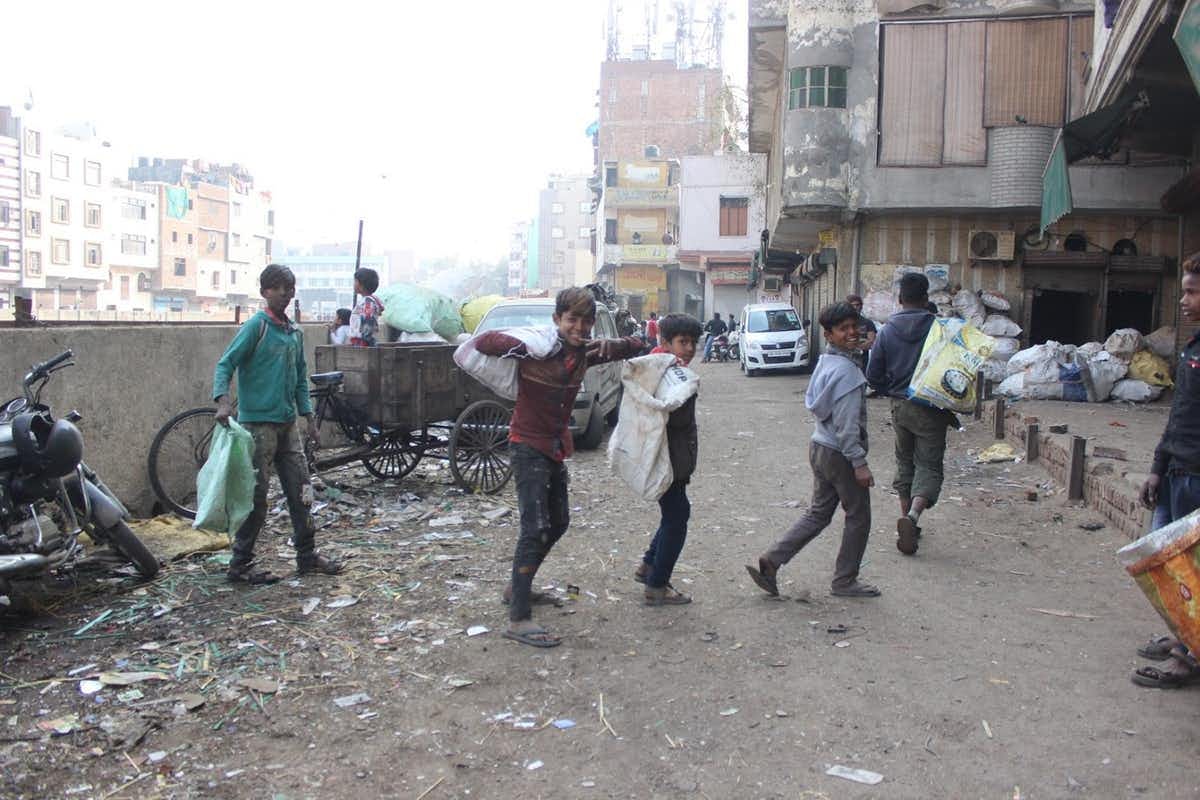 After our tour of Seelampur we visited Mandoli, a region near Delhi where we were told e-waste burning takes place. When we arrived and asked about e-waste recycling we were initially met with denials that such places exist. But after some persistence we were directed along narrow, rutted laneways to an industrial area flanked by fortified buildings with large locked metal doors and peephole slots not dissimilar to a prison.

We arranged entry to one of these units. Among the swirling clouds of thick, acrid smoke, four or so women were burning electrical cables over a coal fire to extract copper and other metals. They were reluctant to talk and very cautious with their replies, but they did tell us they were somewhat aware of the health and environmental implications of the work.

We could not stay more than a few minutes in these filthy conditions. As we left we asked an elderly gentleman if people here suffer from asthma or similar conditions. He claimed that deaths due to respiratory problems are common. We also learned that most of these units are illegal and operate at night to avoid detection. Pollution levels are often worse at night and affect the surrounding residential areas and even the prisoners at the nearby Mandoli Jail. 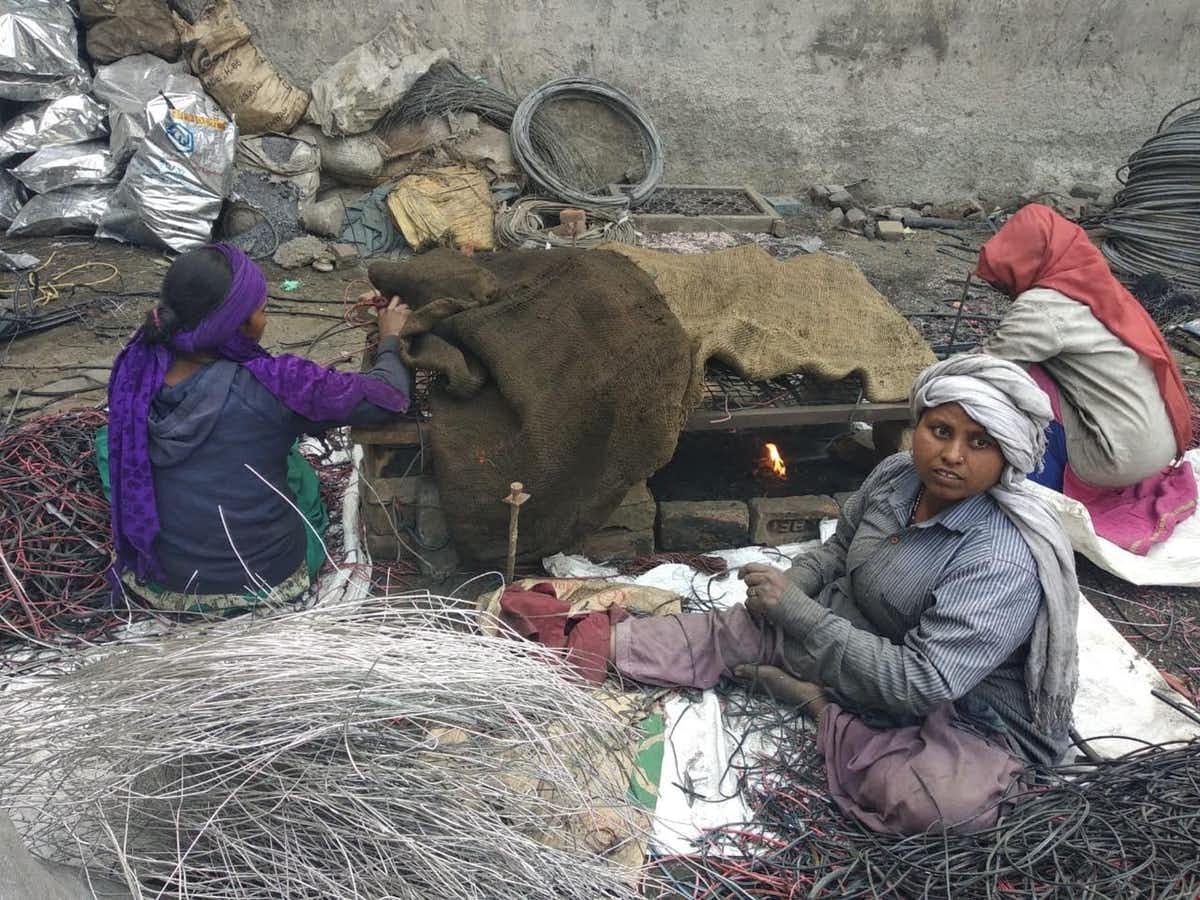 We had the luxury of being able to leave after our visit. It is devastating to think of the residents, workers and their children who spend their lives living among this toxic waste and breathing poisonous air.

Field trips such as this help illustrate a tragic paradox of e-waste recycling in developed versus developing nations. In Australia and many other advanced industrialised economies, e-waste collection is low and little is recycled. In India, e-waste collection and recycling rates are remarkably high.

This is all due to informal recyclers, the kabadiwalas or raddiwalas. They are resourceful enough to extract value at every stage of the recycling process, but this comes with a heavy toll to their health and the environment.