Sustainability is at the heart of UWCSEA’s philosophy on education. From the facilities to its curriculum and student-led projects, the school made a big effort to green all its building and integrate sustainability into everyday life for its 3000 students.

In sunny Singapore, atop the roof of the United World College South East Asia’s (UWCSEA) sports hall sits rows of solar panels. It’s a sight increasingly common in Singapore, where the solar industry has been rapidly expanding, but this project is different because it was entirely student-driven.

The project began in 2012 when then-15 year-old Raghav Shukla (Class of 2015), inspired by a research project on sustainable energy, started mobilising his classmates to find ways to make the school greener. In August, the first panels went up in the international school located at Dover and over the next two years, a total of 860 panels will be installed.

When completed, the solar installations across the 11-ha school will prevent 137,500 kilogrammes (kg) of carbon dioxide from being released into the atmosphere every year, and meet as much as 50 per cent of electricity needed for lighting. 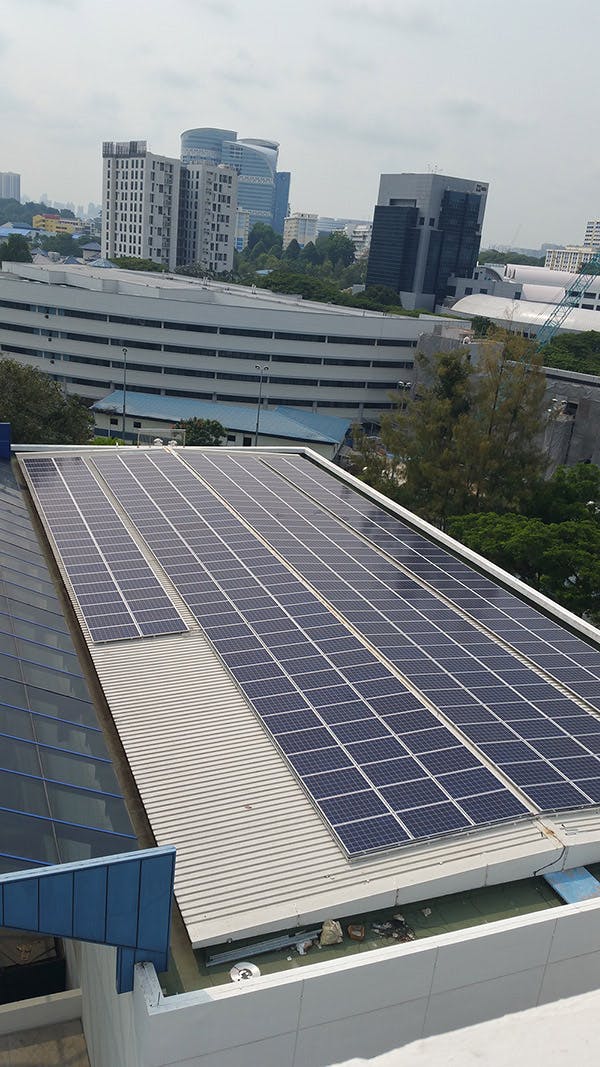 The project, partly funded by donations from parents of the students and partly from the UWC Foundation, is just one example of student-led sustainability projects at the school, which has a unique philosophy about education, Simon Thomas, Director of Operations and Facilities at  UWCSEA tells Eco-Business. “It’s teaching the kids to act and behave in a sustainable way,” he explains.

“The definition (of sustainability) is broadly the conservation of resources and making sure that the needs of the next generation are taken care of. We believe that if we educate students this way, they will become better citizens. So, we have to build a school with the least impact,” he adds.

This ethos can be seen in not just the buildings but also in the school’s curriculum.

With the campus as a living laboratory, students are taught how everything in the school, from the water systems to energy efficiency to even safety such as alarm and fire systems, work – so that they get a well-rounded education. They are also encouraged to think critically about everything around them, Thomas says.

A campus built for scale

As one of Singapore’s largest international schools, UWCSEA offers a wide range of specialist facilities such as a 400-seat multi-purpose hall, theatre halls, laboratories, boarding houses as well as an Olympic-sized swimming pool.

With more than 3,000 students and staff within the Dover campus, it was vital for UWCSEA to optimise the performance of all its systems throughout the day. The core principle is to minimise resource use, Thomas says.

It is this principle that drives the need to have what Thomas calls “high performance” buildings.

UWCSEA operates two campuses in Singapore – one in Tampines in the east that has a won a Building and Construction Authority Green Mark Platinum. Now, the school is aiming to get its older Dover site certified Platinum as well.

A suitable building management system (BMS) that runs these complex systems centrally and automatically is key to making sure that everything runs smoothly.

For this, UWCSEA has chosen Siemens to supply Desigo CC, its latest BMS, because of its functionalities and flexibility, says Thomas.

Desigo CC is able to collect data from the school’s sprawling campus and present it on a single platform. This solution also allows the school to acquire data from the system easily, so it can inform the decision making around the management of the buildings, says Thomas.

“Desigo CC will provide us with huge amounts of streaming data in real time and it also comes with an application that allows you to plug in other modules that aren’t necessarily from Siemens,” he says. “It’s an open system which allows us to make sound decisions to safeguard the students, staff and assets at all times”.

Peter Halliday, Head of Siemens Solutions and Service Portfolio for the Middle-East/Asia Pacific Region added: “Our partnership with UWCSEA is one built on common values. We understand their need for solutions which not only improve the performance and energy efficiency of the entire facility, but also create an environment which facilitates learning and constant innovation.”

In addition to Desigo CC, Siemens provided the school with the web-based energy management platform Navigator™.

“We’ve essentially put the UWCSEA team in control of their campus by giving them the transparency to monitor their systems’ performance and energy demand and supply more effectively,” Halliday explains. “At the same time, our energy engineers within Singapore’s Advantage™ Service Center provide the necessary analysis support with insights on how to further improve the buildings’ performance.”

Thomas adds that the students are educated on how the school is run. For example, if you asked a ten-year old student what the biggest use of water is on the entire campus, he will be able to tell you the correct answer – air-conditioning. 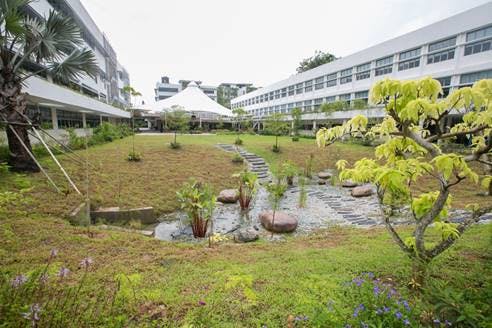 A ‘flood garden’ on UWCSEA that helps prevent flooding in the low-lying areas of the campus. Image: UWCSEA

UWCSEA is taking its leadership in green buildings a step further. It is partnering with Siemens and Singapore-ETH Centre Future Cities to develop and build what will be Singapore’s most energy-efficient office space.

The partners are applying commercially for the first time the ‘3for2’ concept, which allows building developers to construct three floors within the standard space of two floors, without any impact on perceived floor-to-ceiling heights.

In new typical commercial buildings, up to one third of the enclosed volume is typically occupied by technical systems and structural elements, taking up space that could otherwise be devoted to occupants. Large ceiling space is needed for air-based cooling systems and consumes a lot of room.

The ‘3for2’ concept uses a water-based air-conditioning system that drastically reduces the space needed for transporting air. By using decentralized ventilation systems, this space requirement is further reduced.  All in all, this new concept reduces this space consumption by a third.

The office, sited at the new High School block at the Dover Campus, opened in December and will also be installed with Siemens’ Total Room Automation (TRA) controllers for HVAC (heating, ventilating, and air conditioning) and lighting. Artificial light is switched on or off depending on natural light entering a room and with information from presence detectors and integrated brightness sensors. Through intelligent, energy-saving control of the lighting, TRA will ensure optimised conditions within the office space.

A cooler way to save energy

Always eager to try new innovations, the team at UWC SEA also opted for the installation of Siemens Demand Flow chiller plant optimisation solution. Demand Flow is a patented and proven technology that optimises all energy-consuming components controlled by the system algorithms.

Halliday adds: “We have had exceptional results with Demand Flow around the world with the solution gaining traction in Asia over the past 3 years. Given the region’s hot climate, cooling inevitably consumes a large majority of the energy used to run a facility.”

“Siemens has focused our solution to the chiller plant system and provided our customers with a technology which not only lowers the energy consumption, but also simplifies the system operation, improves the indoor air quality and more importantly, extends equipment life.”

UWC’s Thomas says: “We design, build and operate our own buildings, so we manage the whole life cycle. Our students learn from this and we get everyone on board on our sustainability efforts.”

More from Every Building Has A Story