High-income nations released less carbon dioxide last year. But emissions increased elsewhere as developing regions struggled to balance economic growth and climate action, while heavy industries and transport emissions were as hard to abate as ever.

Even as power sectors in some of the world’s most energy-hungry economies pumped less carbon dioxide into the atmosphere in 2019, coal combustion in developing Asia and global demand for oil and gas soared, cancelling out energy-related emissions reductions made, according to data released by the International Energy Agency (IEA) last week.

But the increased use of gasoline, jet fuel and shipping fuels, as well as Asia’s increasing demand for coal—the world’s dirtiest fossil fuel—to power its fast-growing economies meant the upward trend in energy-related carbon dioxide emissions—emissions related to the burning of fossil fuels—could merely be halted, not reversed, the data indicates.

“The IEA’s data for 2019 shows some respite from emissions growing globally, although remaining virtually unchanged from 2018 rather than falling. Nevertheless, it is worth observing that this did occur while global GDP grew by nearly 3 per cent,” said Peter Kiernan, lead energy analyst at the Economist Intelligence Unit.

“Coal use for power in the US and Europe is rapidly declining, and emissions growth in China and India shows signs of moderating, but these improvements are mitigated by strong emissions growth elsewhere,” he said.

Advanced economies such as the European Union, the United States, Canada, Japan and Korea last year recorded emissions cuts of more than 370 million tonnes, or 3.2 per cent.

The growth of renewables in the power sector in advanced economies delivered 130 million tonnes of carbon dioxide emissions savings in 2019. Wind and solar photovoltaic in particular gained traction, helping to push renewables’ share of total global power generation close to 28 per cent.

Electricity generation from coal in advanced economies fell by nearly 15 per cent, bringing down global carbon dioxide emissions from the fossil fuel by almost 200 million tonnes, or 1.3 per cent, from 2018 levels.

Emissions from electricity generation in advanced economies are now at levels not seen since the late 1980s, when energy demand was one-third lower.

After two years of increases, this decline flattened global energy-related carbon dioxide emissions at 33 gigatonnes, with the electricity sector responsible for 85 per cent of the drop, the IEA reports, suggesting that the clean power shift is afoot. 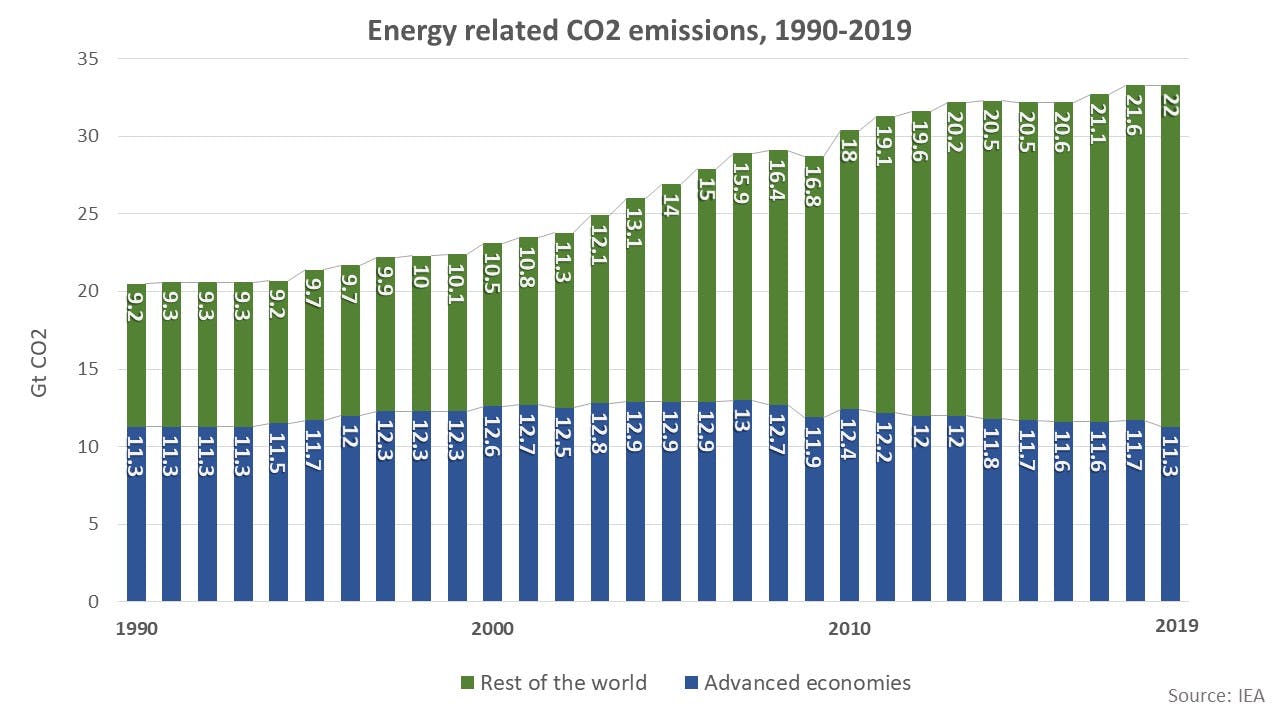 “This welcome halt in emissions growth is grounds for optimism that we can tackle the climate challenge this decade,” said Dr Birol, the IEA’s executive director.

“It is evident that clean energy transitions are underway—and it is also a signal that we have the opportunity to meaningfully move the needle on emissions through more ambitious policies and investments,” he said.

However, the United Nations last year warned that global emissions needed to fall by 7.6 per cent annually until 2030 to stand any chance of avoiding the most disastrous impacts of global heating.

The IEA has been strongly criticised for underestimating the role of renewables in future energy systems and failing to chart an energy development pathway in line with the Paris climate deal as part of its annual World Energy Outlook report.

Outside of high-income nations, energy-related emissions increased by almost 400 million tonnes in 2019, with nearly 80 per cent of the surge coming from Asia, while total production of crude oil, natural gas liquids and refinery feedstocks across OECD regions grew by 5.4 per cent, led by the United States, Norway and Australia.

“While some economies are moving away from emissions increases, for the rest of the world, the trend is still alive,” Melissa Low, a research fellow at the National University of Singapore’s Energy Studies Institute, told Eco-Business.

Eri Watanabe, Japan campaigner at global climate activism group 350.org, said: “It is a welcoming trend to see the decrease of carbon dioxide emissions by the energy sector in major economies.”

“However, it is far from ideal because as per the UN’s latest report, we need to decrease our greenhouse gas emissions worldwide by 7.6 per cent annually, and major economies must take more responsibility than less developed economies,” she said.

Many industries in developing regions also generate emissions from the production of goods that the world’s largest consumer markets in advanced economies demand, said Low.

And while Japan was among the countries that saw its energy-related carbon dioxide emissions fall last year, it plays a leading role in financing a wave of new coal plants across Asia, second only to China.

“Japan’s government and major banks must stop their support of coal immediately and increase support for renewable energy sources. If this does not happen, Japan could lock its own and the region’s power sector in high-carbon sources for decades to come,” 350.org’s Watanabe observed.

The IEA’s data also only focusses on carbon dioxide emissions, neglecting other greenhouse gases such as hydrofluorocarbons from air-conditioners, Low said.

Hydrofluorocarbons trap thousands of times as much heat in the atmosphere as carbon dioxide, and while currently representing only a small portion of total climate emissions, their share is expected to increase as demand for air conditioning skyrockets in a warmer world. 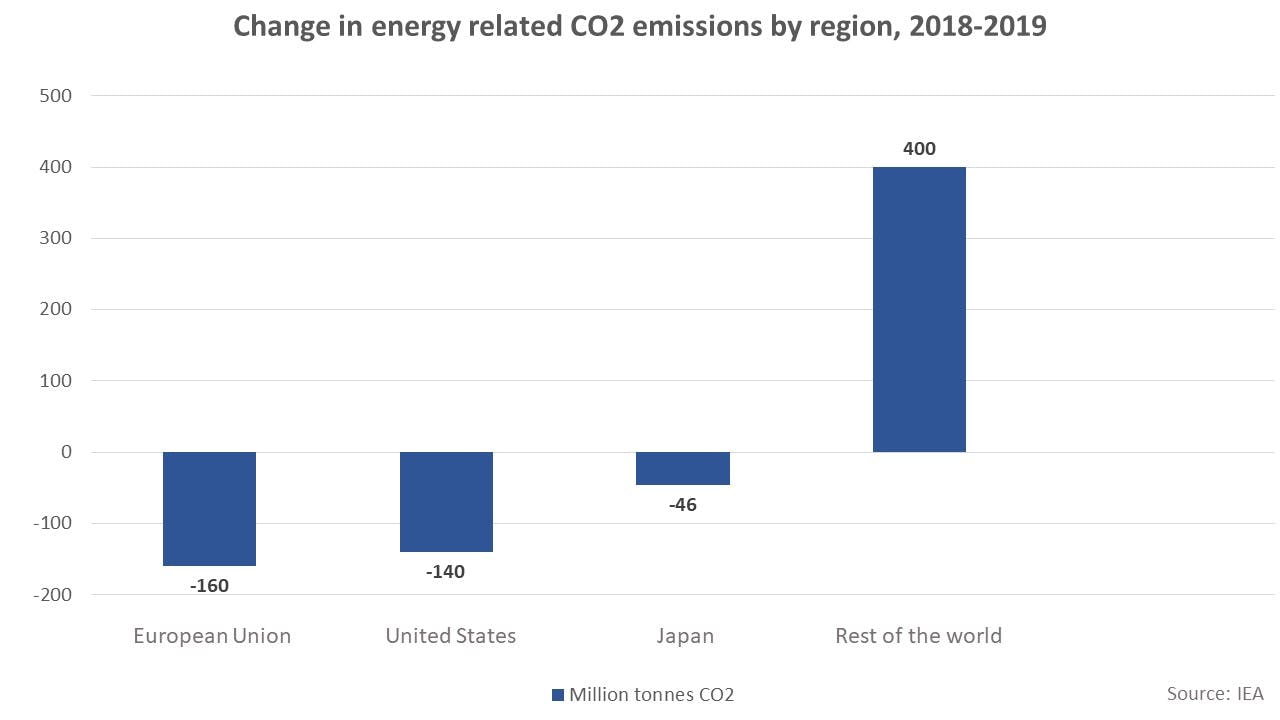 Rising global emissions from oil and gas use reflect that some sectors, such as transport and industry, are lagging in their decarbonisation strategies, said Kiernan of the Economist Intelligence Unit.

Industry players grapple with a myriad of obstacles, ranging from a lack of infrastructure and viable alternative fuels to insufficient policy frameworks and the challenge of steering centuries-old industries, such as car manufacturing, away from their polluting ways.

With people and goods on the move faster and farther than ever, global emissions from transport increased by 2 per cent annually between 2000 and 2017.

Making up 25 per cent of global greenhouse gas emissions, transport emissions show no sign of abating anywhere in the world and are indeed projected to grow faster than those of any other sector.

Neither do heavy industries, which are responsible for around 22 per cent of global carbon dioxide emissions. More than 40 per cent of that comes from combustion to produce extremely high temperatures for industrial products such as steel, where emissions savings are difficult to realise.

But slashing carbon release is an infinitely easier task in nations where living standards and consumption levels are high, and population growth has either slowed or gone into reverse than in regions that grapple with low electrification rates and pervasive poverty, and where population numbers are still increasing, Low told Eco-Business.

“The developing world must think about ways to decarbonise, but at this point, many countries in this part of the world make access to cheap electricity one of their national priorities,” she said, pointing out that coal was still often the cheapest power source available.

But financial obstacles aside, at the end of the day, it boils down to political will, Low said, adding that governments must ramp up policy support to incentivise the use of clean energy and commit the funds to move away from fossil fuels.

She observed that the year 2020 would be decisive in the climate fight, in that governments would need to ramp up the ambitions of their Nationally Determined Contributions (NDCs) pledged under the Paris agreement in 2015.

Atmospheric carbon dioxide levels, which have been climbing steadily in recent decades, hit 413 parts per million in January—the highest level in more than three million years of the world’s history, experts say.

The last time the concentration of carbon dioxide reached this mark, seas were at least 30 feet higher—at a level that would flood major cities around the world today.