Coal colonialism: Japanese-financed coal power plants in developing Asia emit up to 40 times more pollution than plants built in Japan, a study by Greenpeace has found.

Japan is financing coal-fired power plants in developing Asia that are up to 40 times more polluting than facilities built on home soil, and could cause more than 400,000 people to die prematurely in countries already suffering from bad air quality.

Japan-financed coal plants in countries including India, Indonesia, Vietnam, and Bangladesh emit up to 13 times more nitrogen oxide, 33 times more sulphur dioxide (SO2), and 40 times more dust than those built in Japan, according to a new report, A Deadly Double Standard, released on Tuesday by non-government organisation (NGO) Greenpeace.

Japan’s public finance agencies pumped US$16.7 billion into coal projects in countries with low emissions standards between January 2013 and May 2019, which Greenpeace estimates could cause between 148,000 and 410,000 premature deaths.

India—already home to the world’s filthiest air—will suffer the most from Japan’s coal exports due to long-term exposure to fine particulate matter and nitrogen dioxide pollution, followed by Indonesia, Vietnam, and Bangladesh. An estimated 160,000 people in the sub-continent could die prematurely due to Japanese investments, said Greenpeace. 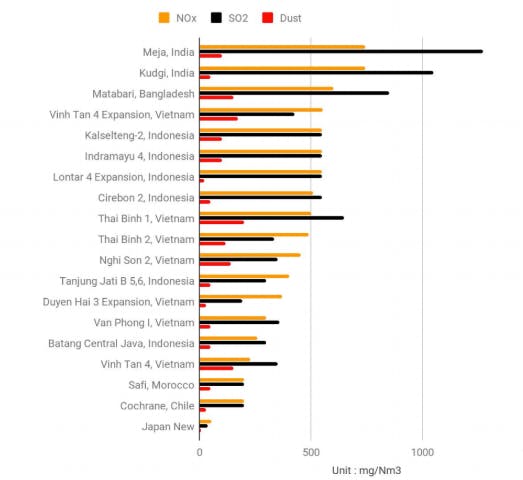 “Japan should honor its trading partners and citizens of those countries by promoting energy technologies that stop hurting people’s health and the environment,” she said.

Greenpace called on the Japanese Government
to immediately stop its public finance agencies from
investing in overseas coal power plants
for which emission limits do not meet the
standards applied in Japan.

Though cheap and abundant, coal is the single biggest contributor to climate change, responsible for almost half the world’s carbon dioxide emissions.

Japan is the only G7 country still building new coal power plants at home and abroad, and is the second largest public investor in overseas coal projects among the G20 countries—after regional rival China.

Japan’s powerful banks have started to respond to continued pressure to quit coal. Mitsubishi UFJ Financial Group, one of the world’s biggest funders of the fossil fuel, announced in May that it would stop funding new coal plants. Soon after, rival Mizuho tightened its climate policy to exclude the financing of low-grade, highly polluting coal projects.

Greenpeace’s study emerges in the same week that the NGO released another report that ranks countries by SO2 emissions, a major byproduct of coal power, using data from the United States’ National Aeronautics and Space Administration.

India ranked first, contributing more than 15 per cent of global man-made SO2 emissions. Greenpeace attributed India’s high SO2 emissions to the expansion of coal-based electricity generation over the last decade.

Most Indian coal-fired power plants lack the technology to reduce air pollution, known as flue-gas de-sulphurisation (FGD), the report noted. For this reason, India has overtaken China in the sulphur pollution ranking.

China’s air quality has improved significantly after it installed FGD systems across the electricity generation sector and made major investments in renewable energy. However, the country remains the world’s third-largest emitter. 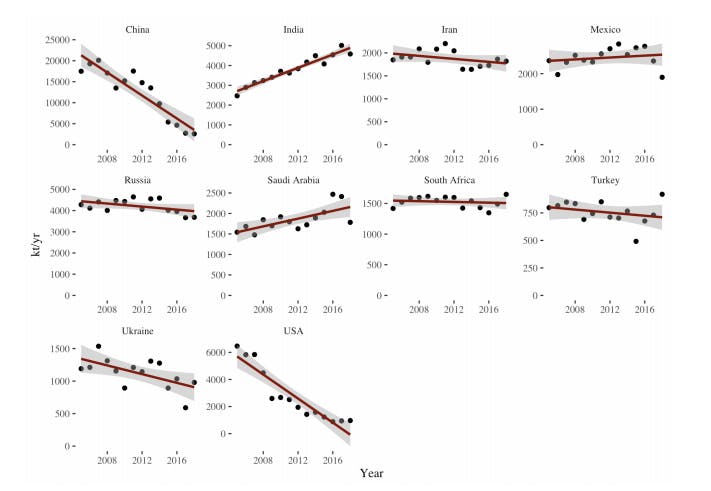 Trends in anthropogenic SO2 emissions by country since 2005. Image: Greenpeace