Covid-19 and meat plants in Asia: A contrast in fortunes to the United States?

Unlike in North America and some parts of Europe, no major coronavirus outbreaks have been reported so far in Asia’s meat and seafood industry. Some companies believe early preventive measures played a role.

In January, before social distancing began in earnest in Singapore and most business continuity plans had yet to move into full swing, poultry company Kee Song was already on the alert for Covid-19.

It began splitting the 250 workers at its slaughterhouse and poultry processing plant in Singapore into three teams and made social distancing the norm at work. It ensured that employees on the first and second levels of the facilities did not come into contact with one another, and those who could work from home began to do so.

At the slaughterhouse and meat processing plant, the donning of protective gowns and face masks, and disinfection of hands and boots were already standard procedures, said James Sim, head of business development at Kee Song Food Corporation (Singapore).

But the company—which supplies 40,000 chickens daily to the Singapore market—stepped up its measures against Covid-19. Slaughterhouse and meat processing workers began changing their masks more often and spaced themselves apart. Sales and logistics staff began wearing face masks. The same measures applied to its meat plant in Malaysia, where Kee Song also has hatchery, farming and breeding facilities.

Workers at its Singapore plants come from countries such as Thailand, Myanmar, Malaysia and Singapore, and the company dished out advice in different languages on how to keep safe early on. No worker has been diagnosed with Covid-19 so far. “Not even their housemates or flatmates,” said Sim.

He believes the early rollout of preventive measures is one of the reasons why Kee Song has seen minimal disruption to its business amid the pandemic.

Coronavirus outbreaks have struck slaughterhouses and meat plants in North America and some European countries, showing up myriad problems such as the vulnerability of workers in the industry. Crowded working conditions, workforces made up of migrant workers who live in communal housing, and continued operations of the plants as the pandemic spread in those countries have been cited as factors behind the outbreaks. Public officials in the US also told the Financial Times that they saw workers without masks at the plants.

According to the US Centres for Disease Control and Prevention, coronavirus cases have been reported in 115 meat and poultry processing facilities in 19 states. Among approximately 130,000 workers at these facilities, there have been 4,913 cases and 20 deaths as of end-April.

Millions of farm animals have also been culled, or “depopulated”, because the temporary shutdown of slaughterhouses to contain Covid-19 outbreaks has meant the animals could not be killed for food.

No Covid-19 cases so far, some companies say

The situation in many Asian countries appears to be different, with no major outbreaks reported so far in the meat and seafood industry.

Reasons for the contrast in Covid-19 outcomes thus far between American and Asian meat companies, however, remain unclear. This is due to the lack of comparable information on measures adopted at plants on both sides of the world, and how well they were implemented. Data such as the extent of Covid-19 testing at plants in America and various Asian countries is also not available.

Several companies confirmed that no Covid-19 cases have emerged at their Asian plants so far.

Cargill, whose operations in China, Thailand, Indonesia and the Philippines include 12 poultry processing plants, told Eco-Business it does not have any confirmed Covid-19 cases at its meat plants in Asia.

All its meat plants in Asia are currently in operation, and disruptions have been limited in general. “The challenges are mainly around transportation of goods, getting people to work, as well as keeping people safe both at work and in their everyday life,” a spokesperson said. “Up to now, we have seen no major disruptions with operations in our plants and the whole supply chain in Asia.”

The food and agriculture giant, which saw a major outbreak at one of its meat packing plants in Canada that has claimed the lives of two workers, said its measures in Asia include strict temperature checks, timely updates to staff and educating them about proper hygiene and safety precautions. Other measures are social distancing (including in canteens and locker rooms) and regular disinfection of its plants. Besides poultry processing plants, Cargill has three feed mills, three hatcheries and breeder and broiler farms in Asia that hire nearly 20,000 people, of whom 16,000 work in plants.

In a statement on 7 May, Cargill outlined how it had stepped up measures at North American plants in the past month to protect its workers.

Seafood company Thai Union, which has seven major seafood processing plants in Thailand and Vietnam, has also not seen any Covid-19 cases at its plants in Asia. Its enhanced Covid-19 measures include temperature checks, provision of alcohol rubs for hand sanitisation, social distancing and increased hygiene and cleaning protocols.

“It is important to us that our staff feel safe and protected at their workplace,” a spokesman said. Thai Union has about 35,000 seafood processing plant workers in Asia, and has not encountered supply chain challenges caused by Covid-19 in the region. 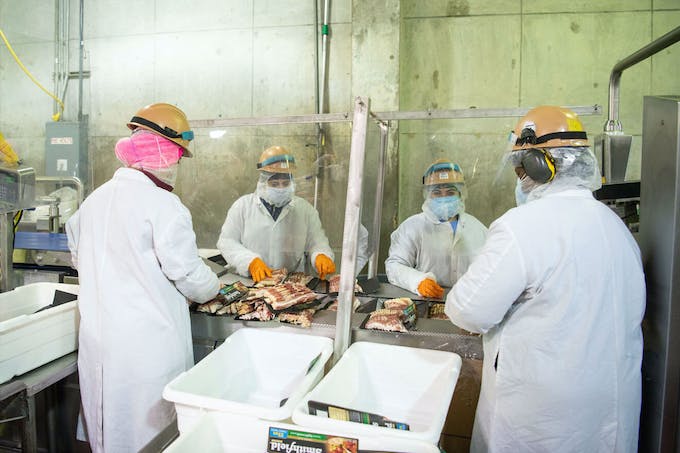 American pork giant Smithfield has installed plexiglass barriers on the production floor and in break areas. This is especially important in areas where social distancing is not possible, it said. Image: Smithfield Foods

Major meat producers that did not respond to Eco-Business’ queries included Tyson Foods, Thailand’s Charoen Pokphand Foods and Hong Kong-headquartered WH Group, the world’s largest pork company and a market leader in China. In the US, WH Group’s subsidiary Smithfield Foods had to temporarily close its Sioux Falls plant in South Dakota, which had several hundred Covid-19 cases and was one of the country’s largest single-source coronavirus hotspots.

They could extend hours of operation, organise staff into shifts, and stagger workstations on either side of processing lines so that workers are not facing one another. They could also provide personal protective equipment such as disposable gloves, hair nets, face masks, clean overalls and slip-reduction work shoes. Sridhar said it is possible to reduce distance between workers who are dressed in personal protective equipment, but standard biosecurity, veterinary and food safety guidelines should still be followed at all times.

Conditions in factory farming that pack genetically uniform and immuno-compromised animals closely together have been flagged as a pandemic risk.

However, it is highly unlikely that people can contract Covid-19 through food, said Sridhar.

Slaughterhouse workers are at high risk of other zoonoses—diseases that transmit from animals to humans—and healthcare provisions for them should be improved, said Delia Grace Randolph, a professor of food safety systems at the Natural Resources Institute at the University  of Greenwich in the United Kingdom and contributing scientist at the International Livestock Research Institute.

To ensure the safety of meat workers amid the pandemic, companies can also conduct frequent Covid-19 testing among employees, she said.

Acknowledging the importance of testing in keeping employees and communities safe, Cargill’s spokesperson said: “We are relying on and working with local health authorities to manage and conduct testing as required. We believe testing should be conducted by those who are properly trained to administer and analyse the results, and in a setting that preserves our employees’ privacy.”

Indeed, the greater impact of Covid-19 on Asia’s meat companies appears to be customers with reduced spending power as jobs and livelihoods are lost. This has been the case for Singapore-listed Japfa, a diversified animal protein company operating in China, Indonesia, Vietnam, Myanmar and India.

One of the largest poultry producers in Indonesia, Japfa said in its 2020 first-quarter financial update: “This unprecedented outbreak has reduced purchasing power and, as a result, reduced demand for many consumer products. As we mainly supply chicken, which is a staple and affordable protein food, hopefully the impact on demand will not be drawn-out.”

The FAO’s Sridhar said poultry and pork consumption in some countries, notably India and Thailand, have dropped noticeably and the industry has taken a serious hit. This is partly due to a drop in incomes but there have also been false news reports about the virus spreading through meat.

He expects demand to normalise in the next few months, but added that the impact on smallholders in the livestock sector is yet to be assessed.