Could vertical fish farms be Singapore's answer to food security?

Fish farming could soon be a common sight in parks, rooftops and viaducts in Singapore, as two local firms unveil a smart urban solution to boost food production in the space-scarce island nation.

Riding the wave of urban farming in Singapore, two local companies have come up with a solution to boost food security—vertical fish farms.

The urban farming model Floating Ponds, which took four years of work and S$2 million to develop, was unveiled on Tuesday at a press conference by consulting firm Surbana Jurong and Apollo Aquaculture Group.

Tan Yok Joo, deputy director, architecture, at Surbana Jurong, said at the event that Singapore faces a space crunch when it comes to traditional farming. Projected population growth is set to further challenge the nation’s ability to meet its energy, water and food needs.

Singapore consumed 86,352 tonnes of fish last year, of which local farms provided 6,536 tonnes or 7.6 per cent, according to a report by the Agri-Food & Veterinary Authority of Singapore. 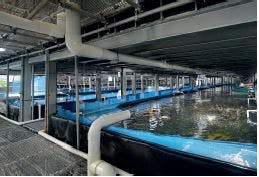 The World Wide Fund for Nature has reported that 90 per cent of the world’s fishing grounds are already overfished or fully depleted, while traditional aquaculture has been responsible for the destruction of mangrove forests and polluting the environment.

Floating Ponds is therefore one way to solve these issues, and enables Singaporeans to understand the journey of food from farm to fork by embedding food production within the community. “There is increasing consumer demand to know where food comes from and whether it is sustainable,” Tan added.

Each aquaculture farm built according to the Floating Ponds model will consist of multiple storeys of ponds and filtration tanks in a circular ecosystem.

As part of the system, solar panels on the roof generate energy to power the farm and cultivate algae to feed fish; a constructed wetlands system purifies and recycles harvested rainwater and wastewater; while nutrients taken from discharged pond water fertilise the edible plants and algae.

Ponds are further equipped with sensors that let farmers monitor the temperature, acidity levels and salinity of the water remotely. 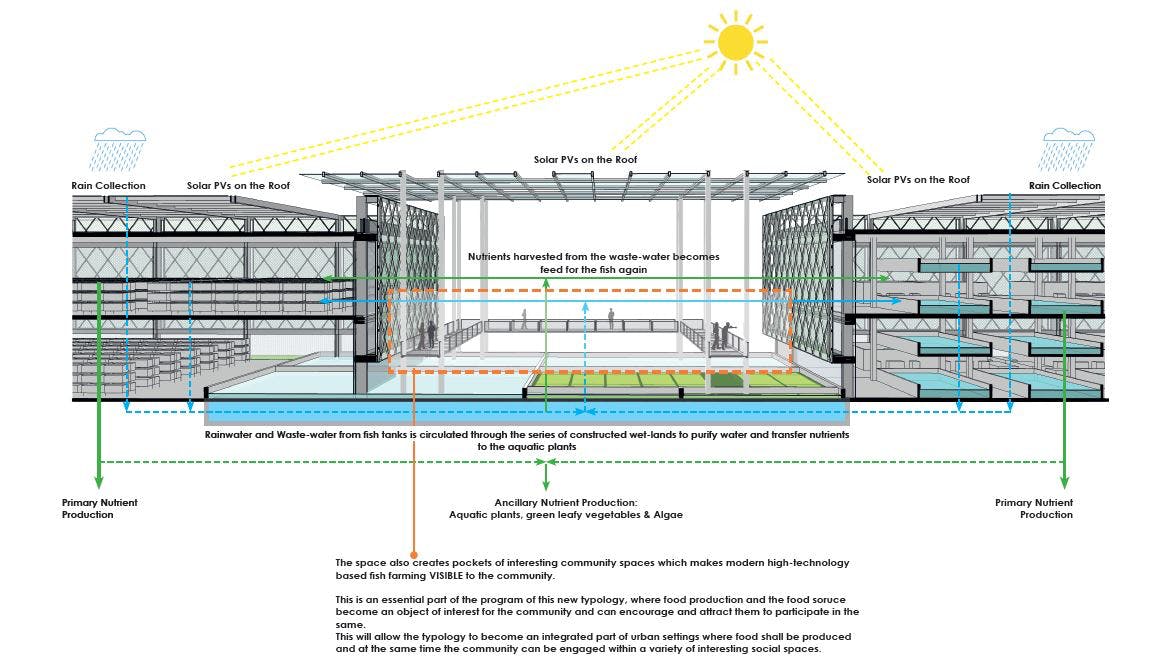 The land-based model can fit into any unused urban space including parks, rooftops, community spaces, and viaducts. Both Surbana Jurong and Apollo were unable to give a specific date as to when the first vertical fish farm would be constructed, but said they were in discussions with the Urban Redevelopment Authority, the regulatory body for urban planning, and state-owned real estate developer JTC Corporation.

A three-tier prototype of the model has already been built on Apollo’s farm in Lim Chu Kang, where it produces 110 tonnes of fish a year. A second project is in the works and will be unveiled at the end of the year.

Apollo’s deputy chief executive officer, Lucky Phua, also pointed out that an additional benefit of urban farming fish is safety and traceability. Floating Ponds cultivates fish in an environment free from contamination, which reduces the need for antibiotics; variables are harder to control for wild-caught or imported fish.

Local farmers face the same problem with young fish in the fingerling and fry stages, said Ng. “We designed Floating Ponds not only to cater to farming fish but also to take care of fingerlings and enable us to sell better fry to local farmers.”

Most fish fry reared in local fish farms are imported from overseas, but the supply is unstable and untraceable, he remarked.  He also emphasised that urban farming solution did not intend to undermine local fish farmers but rather, to work with them. 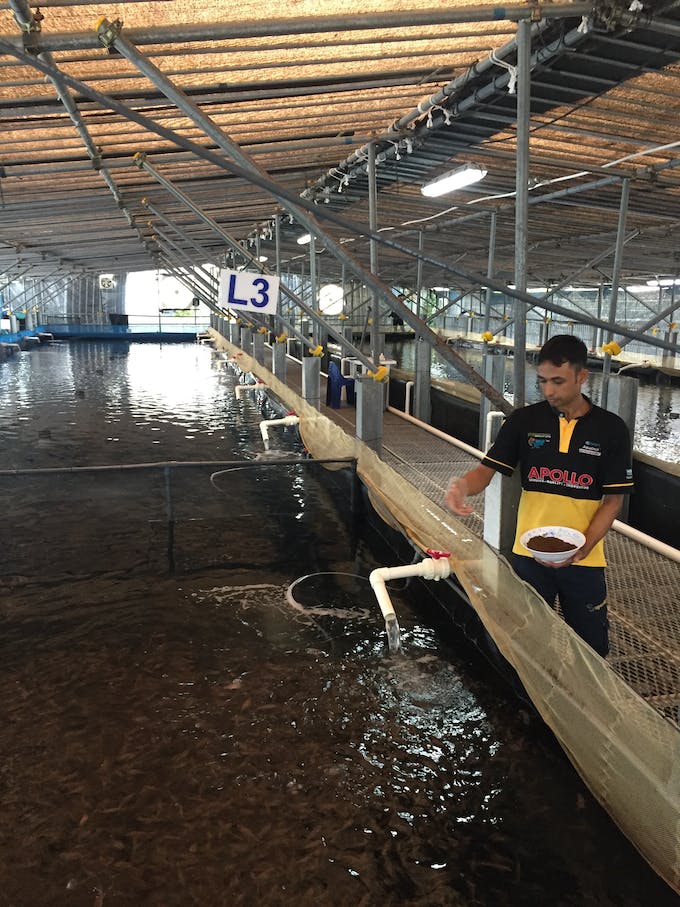 “Local farmers employ very traditional methods and face many issues such as oil spills. If they can turn to land-based, high tech farming, then such problems can be eliminated,” he said, adding that farmers will always have a role to play because they have years of experience under their belt.

Wong Heang Fine, group chief executive officer of Surbana Jurong, commented that they are also avoiding competition with traditional fish farmers by focusing on premium grade fish such as grouper and coral trout that most farmers may not be able to breed locally anyway.

In addition to its planned projects in Singapore, Apollo also plans to set up a two-tier vertical fish structure at its fish farm in Brunei. It has also received queries from Malaysia, Indonesia, China and the Middle East and will be presented at the World Architecture Festival in Berlin later this year.