Bluefin tuna: a recipe for disaster?

A high-profile sales launch by JD.com led to a public relations disaster. Is bluefin tuna China’s next endangered prestige delicacy?

Next morning, on June 9, Liu unveiled plans for JD.com to sell southern bluefin tuna that was sourced from Australia, priced at 300-800 yuan (US$44-118) per 100 grammes, depending on the cut. 800 yuan is roughly a week’s wage for many restaurant workers.

JD.com had not understood or fully prepared for the commitment to promote sustainable global supply chains and sustainable consumption.

Bluefin is the rarest, most expensive, and most endangered among tuna species. The three bluefin subspecies – Pacific, Atlantic and Southern – are all at risk, classed as vulnerable, endangered and critically endangered respectively by the International Union for Conservation of Nature (IUCN), though some experts think Atlantic bluefin populations may be recovering.

To its credit, JD.com quickly agreed, banning sale of the fish on its platform, emphasising that it was selling farmed tuna, rather than wild-caught. The ban was a sign of its willingness to hold itself to a higher standard, it said.

Environmentalists have generally viewed the debacle as part of the company’s learning curve. Greenpeace East Asia senior campaigner Pan Wenjing said JD.com had not understood or fully prepared for the commitment to “promote sustainable global supply chains and sustainable consumption.”

Huang Shuya, who monitored the case for CBCGDF, praised JD.com’s quick response, while saying its hasty retreat suggested it had not anticipated such a large public reaction.

JD.com’s dive for cover has caused ripples in the e-commerce sector. Taobao, China’s largest e-commerce site, and the online food giant Yhd.com, have both withdrawn bluefin tuna from sale.

Nonetheless, a number of small venders on the giant Taobao platform are offering “black tuna,” another name for bluefin.

Overall sales of bluefin tuna are rising in China in line with growing demand for luxury seafood. This raises the possibility that bluefin could fill the market gap created by the ban on shark fin soup.

There is no sign yet though that the controversy and high-profile bans on online sales are dampening sales through other channels.

E-commerce platforms have also sought to ramp up sales of imported luxury foods. Taobao CEO Jack Ma led the way, splashing 38,888 yuan (US$5,700) on the high-profile purchase of a 68 kilogramme (kg) bluefin tuna in November 2015. The lavish, much photographed feast was the first time many Chinese consumers had heard of bluefin tuna.

Japan is the main consumer

Overall consumption remains low though. Japanese restaurants are a niche market in China. Bluefin tuna is expensive, eaten mostly by the wealthy in coastal cities with strong seafood cuisine traditions, or in China’s major inland cities.

Chinese consumers ate up to 220 tonnes of bluefin tuna in 2016 although China’s customs data shows imports rose 37 per cent that year.

Japan accounts for 80 per cent of the global bluefin catch. Chinese fleets are limited to hunting Atlantic bluefin under catch quota rules, so importers must buy Pacific and Southern bluefin from other fleets.

Farm it or ban it?

Fan Xubing, founder of food website newsavour.com, told chinadialogue that total opposition to eating bluefin tuna was unrealistic: “You should steer people towards eating farmed fish, while better monitoring endangered populations.” He sees a choice between consumption and conservation as overly simplistic.

However, conservationists maintain that farming will not stop overfishing of other species because farmed bluefin are fed young wild-caught fish. A bluefin tuna needs 15kg of fodder to gain 1kg in weight.

China’s huge demand for prestige foods like shark fin and sea cucumber has conservationists worried that overfishing of bluefin tuna will worsen. They are concerned that bluefin will fill a gap in the market left by successful campaigns against eating shark fin. 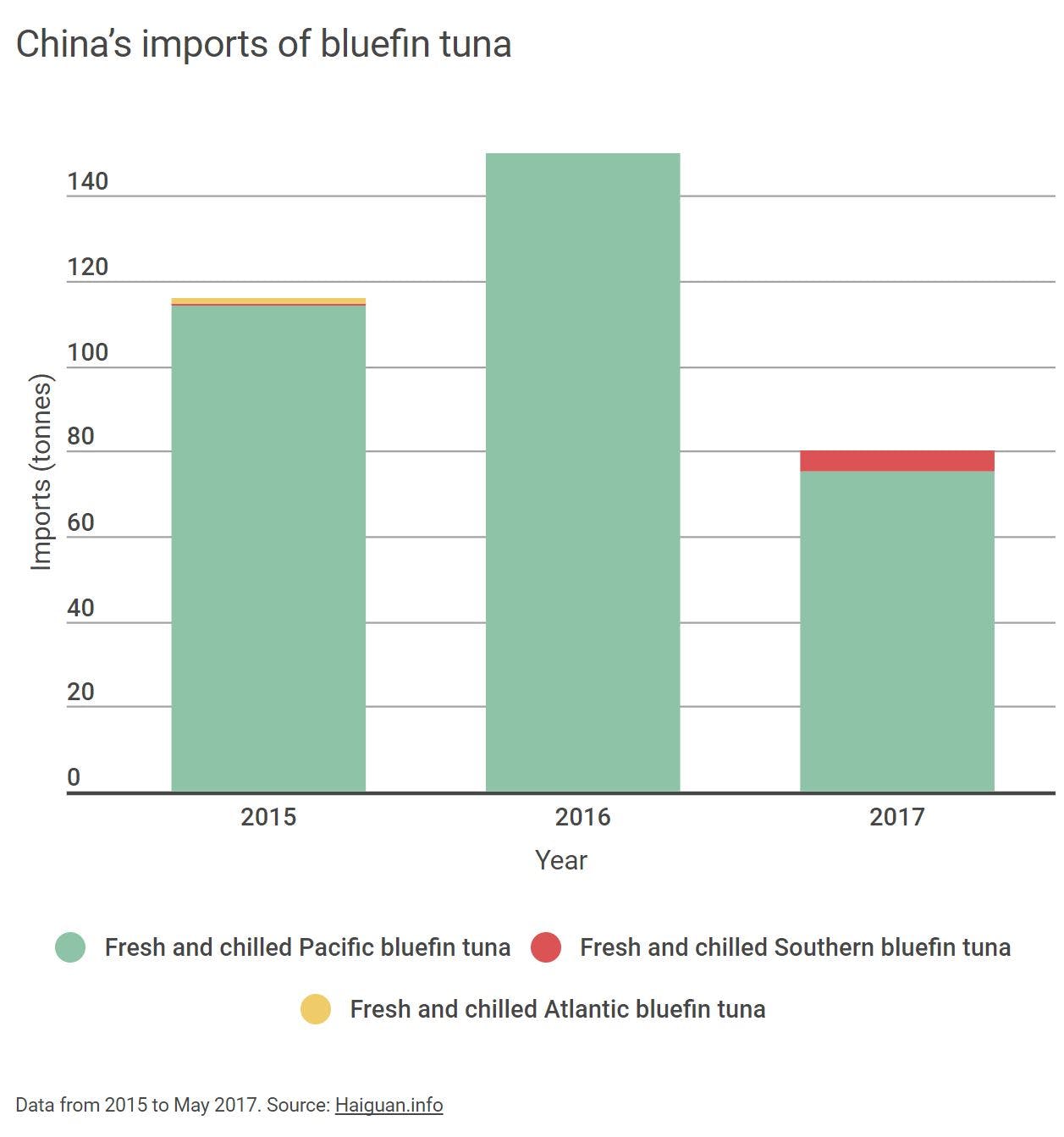 Bluefin is not part of traditional Chinese cuisine. Yet there is cause of concern. Import data shows rapid increases in the three years since campaigners declared victory in the battle to cut consumption of shark fin.

Michael Fabinyi, a senior research fellow at the School of Communication at the University of Technology Sydney, studies luxury seafood eating habits in China. As the overall market is enormous, and growing, he expects bluefin consumption to rise.

Shark fin sales plummeted after a government ban on eating them at public banquets, coupled with consumer fears about fakes. However, the case of sea cucumbers suggests that NGO awareness campaigns alone are insufficient. “Lots of sea cucumber species are endangered,” said Fabinyi, adding “but that’s still a very popular food in China.”

Hu Tao, director of the China Program at WWF’s Washington Office, says a fast-growing middle class means China’s consumption “is even likely to outstrip Japan, if this trend is not controlled.” The global bluefin tuna catch would have to double for that to happen.

As eating bluefin remains a niche taste in China, Fabinyi’s view is that higher sales would need more marketing, making JD.com’s decision to halt sales and marketing of bluefin a significant step towards controlling consumption.