AC Energy’s coal exit may spur other local players to do the same, say energy experts. But is the company’s 10-year timeframe ambitious enough?

Ayala’s power generation arm, AC Energy, announced this week (20 April) that it would release its coal divestment plan by 2025 and make a full exit by 2030. The plan to halt new coal power projects does not involve Ayala’s other subsidiaries such as Bank of the Philippine Islands (BPI) which, according to climate activists, is invested in coal-fired power plants in Batangas, Quezon and other parts of the archipelago.

On why it would take 10 years to divest from coal, AC Energy’s corporate communications and sustainability head Irene Maranan said it was a conservative projection of the time it would take to find the right buyers for its assets. AC Energy’s current coal capacity is 550 megawatts (MW).

Because AC Energy is not de-commissioning or writing off its coal assets, the speed of its energy transition will depend on who is willing to buy its coal assets, and at what price, said Sara Ahmed, an energy finance analyst at the United States-based Institute for Energy Economics and Financial Analysis.

“The question is, which company has the risk appetite for coal now? Ayala’s coal exit is a signal for other conglomerates to realise who among them will be left holding the bag once markets adjust to reflect the reality of stranded risk and coal’s unprofitable future,” Ahmed told Eco-Business. A stranded asset is one that does not have enough cash flow to cover its debt, leading to bankruptcy for the investor.

“Corporate players that realise this risk sooner will be next to divest,” she said.

Coal, the single biggest source of man-made global warming, currently represents 52 per cent of the Philippines’ energy mix. This is followed by renewable energy at about 22 per cent, and natural gas at about 21 per cent.

AC Energy’s move comes as coal-fired power is expected to surge in the Philippines, with four of its biggest energy firms set to double the country’s coal fleet if all their proposed projects in the next two to six years are pushed through.

This is a signal for other conglomerates to realise who among them will be left holding the bag once markets adjust to reflect the reality of stranded risk and coal’s unprofitable future.

The Manila Electric Co or Meralco—the country’s largest power distribution utility through its subsidiary, Meralco Powergen Corporation (MGen)—has the most coal projects under construction. Its proposed 5,470 MW is a 672 per cent increase from its current coal capacity.

MGen and food and beverage giant giant San Miguel Corporation account for 67.8 per cent of all current coal proposals. Aboitiz and DMCI Holdings have 1,336 MW and 700 MW of planned coal capacity, respectively.

Before AC Energy’s announcement, the last major energy firm in the country to quit coal was First Gen Corp, whose parent company is First Philippine Holdings, in 2016.

“It would not be surprising for other companies to move the same way, especially with recent power developments that have made it risky to further bet on coal,” Apanada told Eco-Business.

Apanada cited how the country’s Energy Regulatory Commission (ERC) has required power supply contracts to have fixed bid prices that include the projected cost of fuel. This makes it hard to predict coal prices, which are subject to global price and foreign exchange fluctuations.

The Philippines imports 75 per cent of its coal, which contributes to its people paying the second-highest prices for electricity in Asia.

10 years to steer away from coal?

AC Energy owns shares in two operational coal-fired power plants in Bataan and Southern Luzon. A third plant, in Bataan, is under construction.

The company has, in the past, sold some of its coal assets to one of the country’s largest electricity producers, Aboitiz Power Corporation.

Explaining the company’s divestment timeline, Maranan said: “Even if we are scaling up renewables, our existing portfolio will not be able to keep up with the country’s energy demand. We need to continue to serve our customers with reliable power and it takes time to replace coal capacity with renewables.”

We need to continue to serve our customers with reliable power and it takes time to replace coal capacity with renewables.

Ayala joins a growing roster of conglomerates, banks and governments that have signalled a move away from coal in Asia—one of the last remaining growth markets for the world’s dirtiest fossil fuel, which is still seen as a cheap and reliable electricity source for developing economies.

Japan’s Sumitomo Mitsui Banking Corporation and the Mizuho Financial Group both announced last week they would stop financing new coal projects. South Korea’s ruling Democratic Party, which won a decisive victory this month in the parliamentary elections, also declared in its Green New Deal that it will cease coal financing globally by 2050. 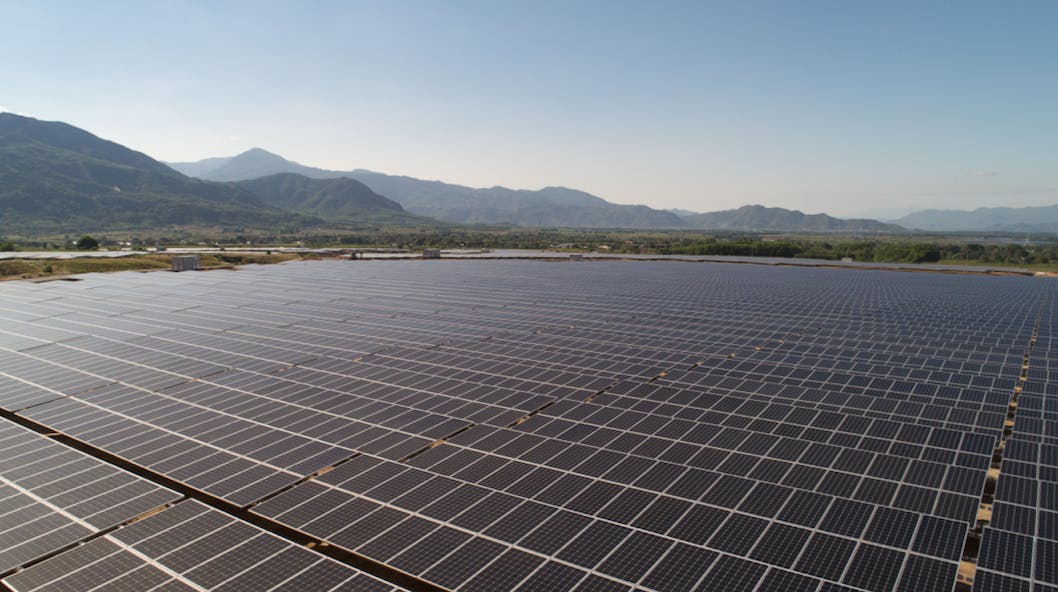 AC Energy’s 50 megawatt solar farm was inaugurated in 30 May 2019 in Khan How, Vietnam. Ayala Corp’s energy arm said the project was part of its target to reach 5 gigawatts of renewable energy capacity by 2025. Image: AC Energy

The rapid drop in renewable energy costs has opened new possibilities in energy systems around the world, including the Philippines, said Ahmed, who is Filipino.

AC Energy had already set a goal to sell US$1 billion worth of coal assets by 2025 to rebalance its portfolio and raise capital for its 5 GW clean energy capacity target in the region in five years.

So far, it has diversified its power mix with 208MW of wind, 495.8MW of solar and 235MW of geothermal in Vietnam, Indonesia and the Philippines.

AC Energy, which owns a 50 per cent stake in global renewable energy development company UPC Renewables, also has a pipeline of 400MW of solar and 800MW of wind in New South Wales, Australia.

“The country should follow the exit-coal example of corporates like Ayala by encouraging distributed domestic renewable energy to be coordinated with the already planned and approved grid upgrades and expansion in the country,” said Ahmed.

The Philippines is in the midst of an ambitious power infrastructure project to link the grids of the Mindanao and Visayas groups of islands by 2022.