Even as a pandemic threatens food supply chains, most firms, including China’s top pig and poultry producer, have shed no light on how they are managing risks and opportunities linked to farm animal welfare.

Major food companies in Asia must improve the welfare of farm animals that they produce, supply or use, an annual benchmark of 150 of the world’s largest food companies has shown.

Out of 17 Asian companies in the benchmark, 15 emerged in the bottom tier for being virtually silent on how they are managing the risks and opportunities associated with farm animal welfare.

The Business Benchmark on Farm Animal Welfare (BBFAW) 2019, released earlier this month, comes at a time when the Covid-19 pandemic is highlighting the fragility of global food supply chains and the need to do more to stop the spread of diseases from animals to humans.

“In a world where farm animal welfare is an increasingly important driver of both business value and investment risk, maintaining and improving animal welfare standards must be a focus,” said Dr Rory Sullivan, co-author of the 2019 report and chief executive of Chronos Sustainability, which serves as the BBFAW’s secretariat.

Pig production is big business for Asian companies, but there is also a focus on poultry and seafood.

Companies should begin by publishing commitments to improve farm animal welfare throughout their business operations, state how they will implement these commitments, and report on their performance, said Nicky Amos, managing director of Chronos Sustainability and executive director of BBFAW.

The BBFAW expects corporate policies on issues such as the avoidance of genetic engineering or cloning, avoidance of growth-promoting substances, and reduction or avoidance of the routine use of antibiotics. Companies should also declare their policies on pre-slaughter stunning for all animals, limiting long-distance live transportation and the provision of effective enrichment for farm animals (such as outlets to perform their natural behaviour), she said.

There is a lot more to lose, and bigger challenges to come, if we don’t improve animal welfare globally.

Two primary concerns for consumers, scientists and animal welfare organisations are the use of cages for hens reared to lay eggs, and crates for gestating pigs, the Humane Society International (HSI) told Eco-Business.

Producers as well as many food and food service companies worldwide have pledged cage-free systems for laying hens and group housing for sows, which are the higher welfare alternatives, the HSI said.

These alternatives allow the animals to perform some of their natural behaviour. For chickens, this means nesting, dustbathing, perching and foraging. For sows, this means more opportunity for movement, social interactions and to root (an exploratory behaviour where the pig uses its snout to nudge into something repeatedly).

“In China, however… the majority of (egg-laying hens) are confined to cages so small that they cannot even fully stretch their wings, and each animal has less space that a letter-size sheet of paper or an iPad on which to spend their entire life,” said the HSI. Hens in cages are so severely restricted that they suffer from physical abnormalities due to lack of exercise, and the same happens to sows kept in crates.

“Beyond that, chickens raised for meat need more space and better conditions,” it said. China produces more pigs and chickens (raised for eggs or meat) than any other country.

In China… the majority of (egg-laying) hens are confined to cages so small that they cannot even fully stretch their wings, and each animal has less space than a letter-size sheet of paper or on iPad on which to spend their entire life.

Researcher Michelle Sinclair of the University of Queenslands’ Centre for Animal Welfare and Ethics in Australia has interviewed members of Asia’s livestock industry and said many farms in China are making an effort to address animal welfare.

In research conducted in China, her team asked farmers and slaughter workers what they saw as the most important welfare issues. The top issue cited was the absence of adequate pre-slaughter stunning, which essentially renders an animal unconscious before the slaughter, until death. Quality of transportation was second, and the experience and attitude of workers was third.

Animal welfare issues that farmers and slaughter workers ranked as important also included avoiding stress from heat and cold, sufficient water and feed that was of adequate quality.

Practical solutions exist, such as the formation of prescriptive and locally relevant industry standards, clearly presenting the business benefits of better animal welfare, and building a body of local research, Sinclair and Professor Clive Phillips noted in a research paper last year.

Role of investors and avoiding ‘greenwash’ 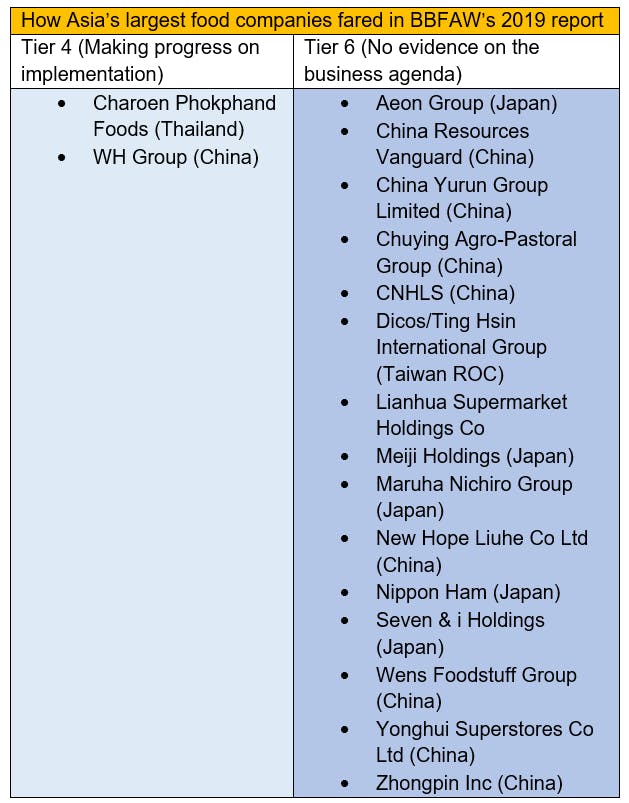 15 of the 17 Asian companies in the Business Benchmark on Farm Animal Welfare 2019 were in the bottom tier. Image: Eco-Business

Investors have an important role to play and need to be more active, said the BBFAW and HSI.

Investors should expect companies to be transparent about their business and improve their practices, said HSI. “Further, investors should encourage and incentivise producers and food businesses to create time-bound plans to fully implement animal welfare commitments.”

Challenges faced by the livestock industry include developing knowledge on what the issues are, and how to address them. Many countries do not have prescriptive laws or standards to follow, and the industry has to ensure profitability even as it improves animal welfare, said Sinclair.

Consumers can also make an effort to support companies that have animal welfare policies, and adhere to them. “Obviously they can also eat less meat (of higher quality), substituting for vegetables and other health foods where they can,” said Sinclair.

The HSI said it is important that retailers understand the differences between products, so they can provide customers with options that actually support animal welfare. Producers are able to “greenwash” their practices in a number of ways, such as by making claims that are general—“we treat our animals well, because a healthy animal makes a great product”—or labelling products as certified by an animal welfare scheme which has no significant requirements beyond the law, it noted.

The challenges can be overcome through collaboration among companies, researchers, governments, industry groups and animal advocacy organisations, said Sinclair. “In my view, there is a lot more to lose, and bigger challenges to come, if we don’t improve animal welfare globally. We see a major health and environment crisis semi-regularly and a lot of the time, these disruptions and risks can be tied to a lack of consideration of the animals we farm and share our world with.”

Companies in Asia that have made progress include Japanese retail giant Aeon, said Amos. Aeon recently changed products under its own brand to cage-free eggs, starting locally before expanding sales to all its locations worldwide by end-2022.

The two best-performing Asian companies in the latest benchmark⁠⁠—which was supported by BBFAW’s two founding partners, animal welfare organisations Compassion in World Farming and World Animal Protection⁠—were Thailand’s Charoen Phokphand Foods and China’s WH Group. Both companies placed in the fourth of six tiers, which means they published some information on animal welfare commitments, but did not have robust processes to ensure they are effectively implemented.

WH Group, one of the largest pork producers in the world, provided a general overview of its approach to farm animal welfare, and described the management structure for its sustainability policy that includes animal care, said Amos. Its Smithfield subsidiary, however, has a comprehensive approach and provides a detailed account of its performance. In addition, all of Smithfield’s pregnant sows are put in group-housing.

Meanwhile, Charoen Phokphand has published a farm animal welfare policy that Amos said includes partial commitments on key issues, such as the avoidance of close confinement and requirement of pre-slaughter stunning. It has also set animal welfare targets and reported its progress.

According to HSI, Charoen Phokphand has started cage-free egg production in Thailand. Multinational corporations Sodexo, Tesco and Carrefour have also introduced animal welfare programmes, such as committing to use or sell exclusively cage-free eggs, in some Asian countries.

The six companies in the top tier of the 2019 benchmark were Switzerland’s Coop Group and Migros, and United Kingdom’s Cranswick, Waitrose, Noble Foods and Marks and Spencer.