With Asia Pacific economies being vulnerable to climate change impacts, analysts say a rise in ESG integration by institutional investors in the region is a boost to its sustainability and resilience.

Asia Pacific investors have leapt ahead of their global counterparts in integrating Environment, Social, and Corporate Governance (ESG) strategies into their investment decisions, a new survey has revealed.

The survey, published in May by leading global securities bank BNP Paribas Securities Services, reported that 84 per cent of the 135 institutional asset owners and managers surveyed in Asia Pacific are currently integrating ESG factors into their investment decisions.

European investors closely trailed behind, with 82 per cent of those surveyed having reported incorporating ESG. Only 70 per cent of investors from North America said they are doing so.

Smart data, artificial intelligence and ESG specialists will play a crucial role in helping to break down these barriers in the next few years.

Asia Pacific’s high ESG integration rate bodes well for the region, which is the world’s fastest growing economy, but also home to the world’s most climate-vulnerable countries. The trend also indicates the region is rapidly moving towards resilience and sustainability, survey analysts said.

According to the report, 46 per cent of investors from Asia Pacific gave the highest importance on the environmental impacts of investments, followed by 29 per cent for corporate governance and 25 per cent for social concerns.

Investors from pollution-choked China were most emphatic in terms of prioritising the environmental impacts of investments. Chinese investors were most vocal among all respondents about plans to recruit ESG specialists to guide their investment decisions. 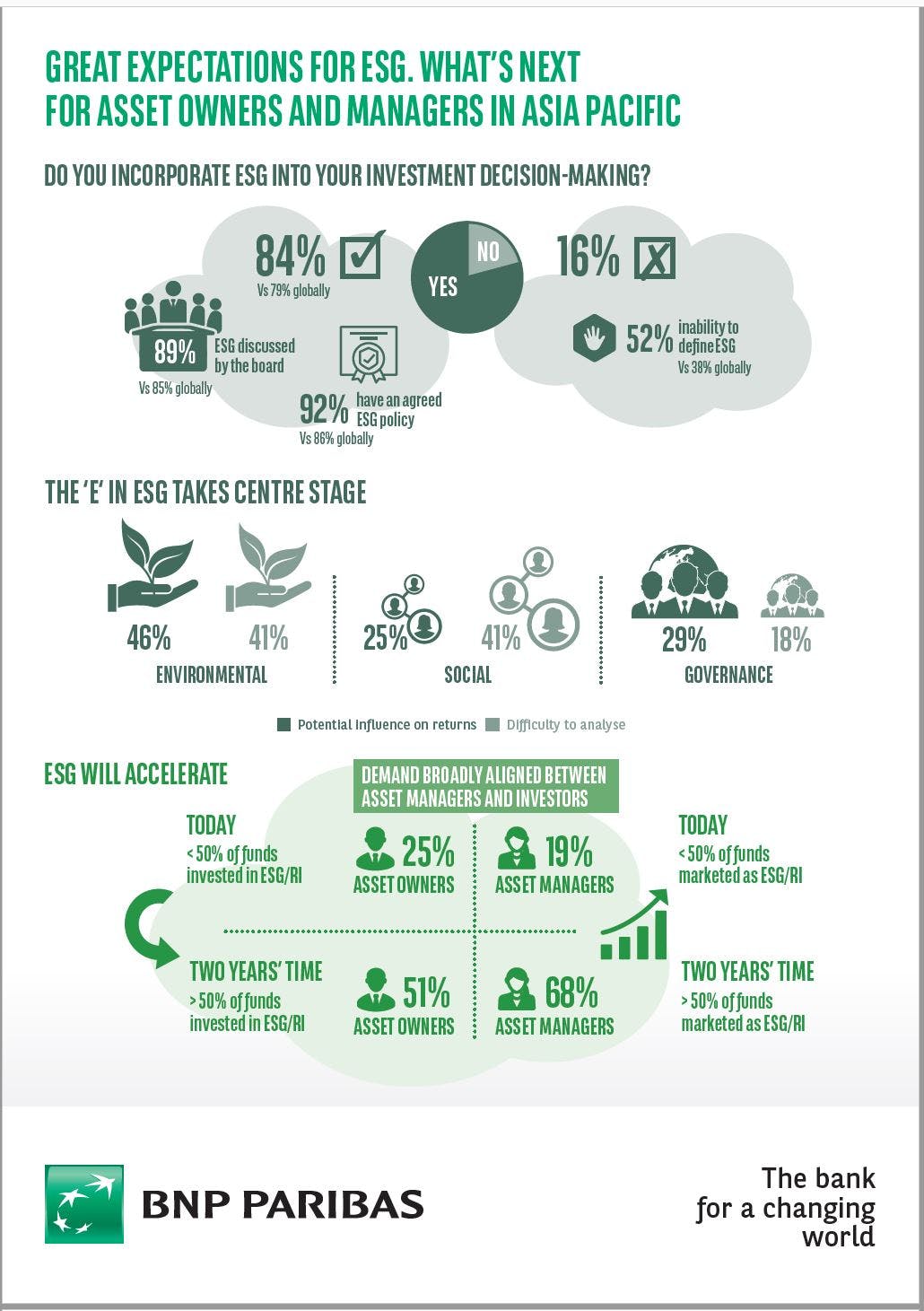 The survey, conducted from February to April this year, involved more than 460 institutional owners and asset managers, representing about USD$5.4 trillion in assets under management.

Investors who were surveyed reported they incorporate ESG, either in how they invest, as asset owners, or in terms of the products they market, as asset managers.

They also committed to doubling their efforts to incorporate ESG factors in investments in the next two years, with growth expected to come from Asia Pacific.

Madhu Gayer, head of investment analytics for Asia Pacific, BNP Paribas, said that the region’s investors have been regarded late adopters of ESG integration, but the new research shows they have learned and caught up quickly with their counterparts in the developed economies, as they are now placing greater emphasis on integrating ESG in the initial stages of investments and market development.

“From the survey we see that investors in this region are looking closely at ESG from an expertise and resources perspective, investment allocation, board oversight and from a regulatory risk point of view,” Gayer said.

Sixty one per cent of investors surveyed agreed that lack of robust data to back up claims that incorporating ESG in investments is profitable has caused some asset managers to be sceptical, but that this data shortage will be overcome in two years.

“Smart data, artificial intelligence and ESG specialists will play a crucial role in helping to break down these barriers in the next few years, ” noted Gayer.

We hear of [banks’] revulsion to Trump’s stance on climate change and their support for clean investments, yet their actions of continued investments in extreme fossil fuels demonstrate that they actually side with the Trump approach.

This is according to analysis by a group of NGOs including the Rainforest Action Network and Sierra Club published in a report titled “Banking on Climate Change 2017,”  and realeased last month.

The report revealed that 37 multinational banks funded $87 billion worth of carbon-intensive fossil fuels projects in 2016.

While this amount was down from 2015 and 2014 at $111 billion and $92 billion, respectively, NGOs said that last year’s performance still fell short of the commitments many of the banks have made to lowering their exposure to fossil fuels. 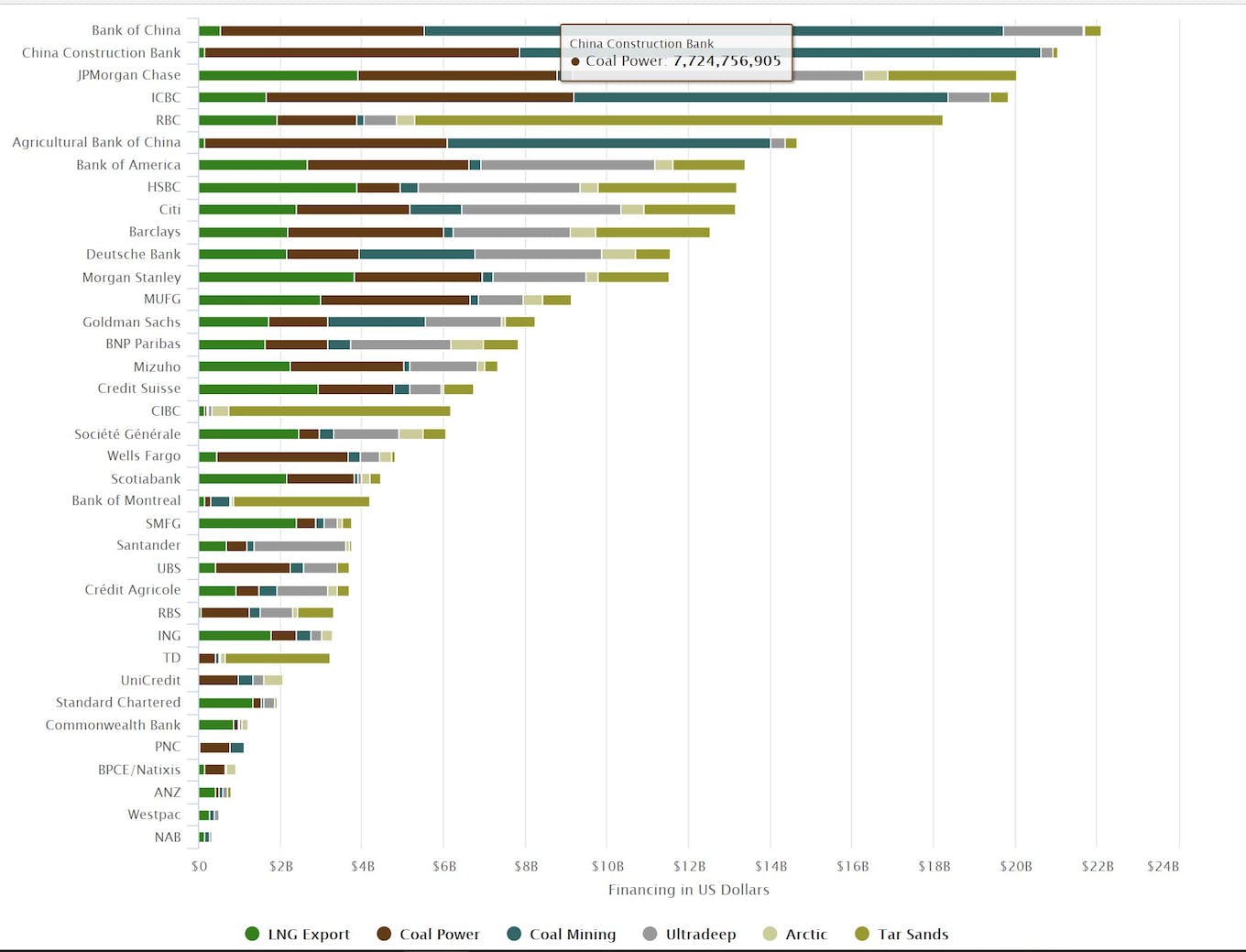 Yann Louvel, climate and energy campaign coordinator at BankTrack, a non-profit that tracks banks and the activities they finance, said in a statement: “There is simply not enough time left for excuse-making, fiddling at the policy edges and more egregious investments in extreme infrastructure projects, [such as] pipelines that transport tar sands oil.”

Louvel added: “We hear of [banks’] revulsion to Trump’s stance on climate change and their support for clean investments, yet their actions of continued investments in extreme fossil fuels demonstrate that they actually side with the Trump approach.”

The banks countered that they were actively transitioning away from high-carbon fossil fuels.

A spokesman from Standard Chartered Bank, which came at rank 31 out of the 37 banks surveyed, told The Guardian that the emerging markets in which they operate need reliable and accessible energy to support economic growth, but that the bank has already tightened their lending criteria to the energy sector.

Germany’s Deutsche Bank, for its part, said it has already revised its investment approach last year.

It also said that it has stopped financing greenfield thermal coal mining or new coal-fired power plant construction and will continue to lower its exposure to fossil fuels.