Asia needs to be on board for global ESG rule-setting: IFRS chair Erkki Liikanen

The International Sustainability Standards Board, a standard-setting body launched after COP26 to harmonise the 'wild west' of ESG reporting is opening an office in Beijing by mid-2023. Plans are underway for Tokyo to host another Asia office.

Establishing a global footprint and being present in all jurisdictions are essential to the International Sustainability Standards Board (ISSB)’s work to develop a baseline for climate-related disclosures, and it is important that Asia actively participates in the process, said Erkki Liikanen, chair of IFRS Foundation Trustees, the ISSB’s parent body.

Speaking at the World Economic Forum in Davos last week on the importance of stewarding responsible capitalism, Liikanen noted the critical function a new Beijing office for the ISSB will serve in its engagement with stakeholders in the region’s emerging and developing economies.

“It is important that Asia is here with us on the journey,” he said.

The ISSB, launched at the COP26 climate summit in Glasgow in 2021, aims to bring an end to what some call the “wild west” of environmental, social and governance (ESG) reporting, where a lack of a robust, globally accepted framework has given rise to confusion and a lack of comparability in capital markets. Its main office is currently in Frankfurt, Germany.

Liikanen said that the ISSB’s first two financial reporting standards will be published by June this year. 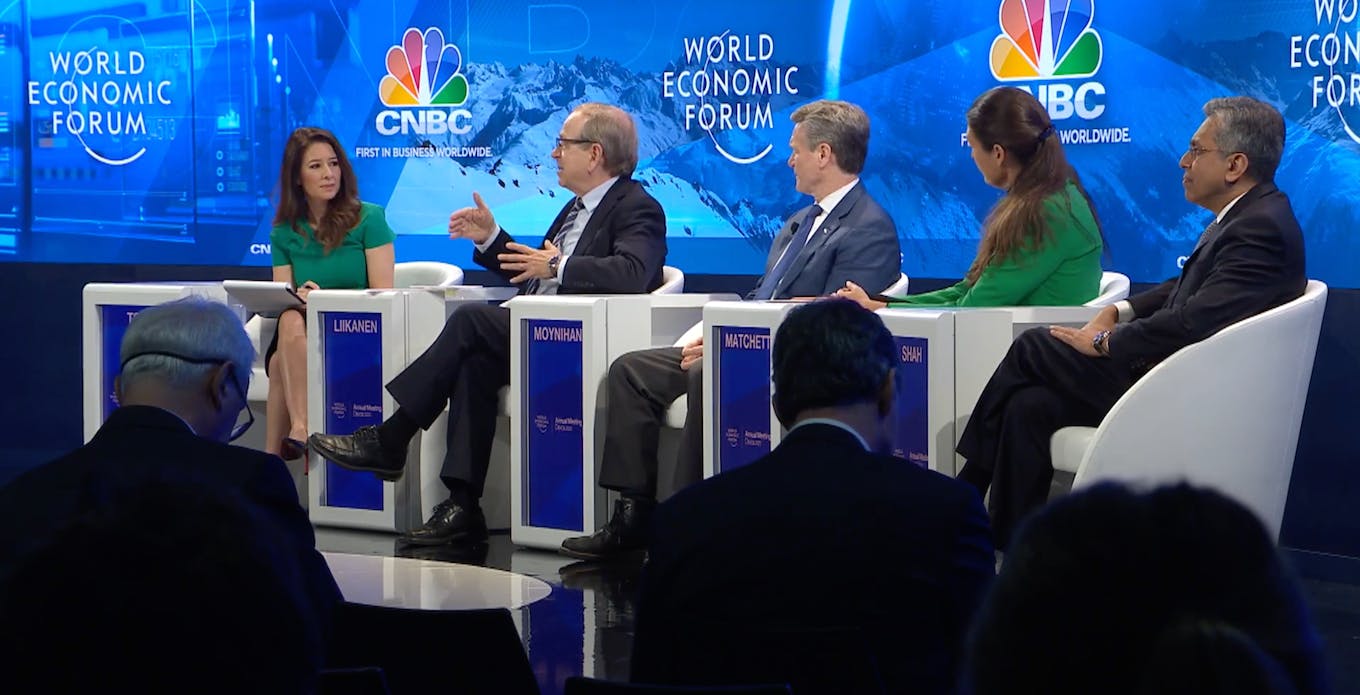 Speaking at the World Economic Forum in Davos, IFRS chair Erkii Liikanen (second from left) noted that there is pressure from the market for the International Sustainability Standards Board to release its finalised reporting requirements quickly. The panel session was moderated by CNBC Europe anchor Karen Tso (first from left). Others on the panel included (from right) Anish Shah, managing director and chief executive of Mumbai-based automotive manufacturer Mahindra Group, Geraldine Matchett, co-CEO and chief financial officer of Dutch health and nutrition multinational Royal DSM NV, and Brian T. Moynihan, chairman and CEO of Bank of America. Image: WEF

Following the global ESG rulemaker’s announcement last October that it will be requiring reporting companies to disclose their Scope 3 greenhouse gas (GHG) emissions, it has also gone on to ink an agreement with China’s finance ministry to establish a new office by mid-2023.

The agreement is for an initial three-year period, and plans are also underway for Tokyo, Japan to host another Asia office.

In a press statement, the IFRS Foundation had earlier said that the Beijing office will act as a hub for stakeholder engagement in Asia and undertake capacity-building activities for emerging economies, developing countries and small- and medium-sized enterprises (SMEs) in the region.

ISSB chair Emmanuel Faber said that the new Beijing office will play a vital role for its work in Asia.

“China is the world’s second largest economy and plays a vital role in supply chains for companies around the world – making it an important jurisdiction as the ISSB develops its global baseline of sustainability disclosures for the capital markets,” he said.

Observers also say that ISSB setting up a base in Asia will facilitate awareness and understanding among companies of how to report emissions. China had earlier courted the ISSB to set up headquarters in its capital city, with its finance minister penning a letter to the international standard-setting body to set out a case for the location choice.

Wai-Shin Chan, head of multinational bank HSBC’s Climate Change Centre of Excellence and global head of ESG research, said that Asian firms are generally behind in reporting their GHG emissions. This includes not having a good understanding of Scope 3 emissions – or indirect emissions that occur in the value chain of the reporting company.

He also noted that ESG disclosure in China is at an early stage.

For instance, China’s 14th Five-Year Plan, its overarching economic and industrial development plan for the period from 2021 to 2025, reiterates the state’s commitment to developing a set of environmental disclosure standards for listed companies, but Chan said it is unclear when this will materialise. Last year, a work plan for listed state-owned enterprises was released, with the expectation that ESG reports should be released in 2023. Similarly, no clear timeline was provided.

“If ISSB standards are adopted in Asia, then there will be a period of adjustment as regulators ask listed companies to align their reporting to ISSB to make it compatible (with the latest rules),” Chan said, noting that the alignment will mirror a similar situation when global jurisdictions had advised the adoption of standards developed by the Task Force on Climate-Related Financial Disclosures (TCFD).

In his address at Davos, Liikanen cites the broad acceptance for industry-led TCFD recommendations as ground for his optimism in getting sufficient buy-in for ISSB’s global baseline for reporting. The ISSB refers to TCFD guidance in structuring its new standards, said Liikanen. “At the end of the day, if there is no global baseline, there is no comparability, and we won’t be able to better serve investors and capital markets.”

He notes that there is an urgency for ISSB to release the final standards.

“We are getting a lot of pressure from the markets and from non-governmental organisations. Everybody feels that we must move forward quickly.”

This story is part of Eco-Business’ coverage of the World Economic Forum Annual Meeting.