Asia and the Middle East to be biggest financial losers from energy transition: report

The world is set to take a financial hit as it transitions away from polluting fossil fuels in a bid to limit global warming. Poorer and oil-dependent countries in particular are likely to feel the pinch.

The transition to clean energy sources required to keep global warming to 1.5 degrees Celsius could see the world lose 2 per cent of its gross domestic product (GDP) by 2050, according to a study by resources consultancy Wood Mackenzie published on Thursday.

The financial loss is likely to stem from issues such as job losses in high-carbon sectors, the write-down of hydrocarbon infrastructure, and the initial inefficiency of technologies like batteries, hydrogen fuel and carbon capture.

Major Asian population centres China, India and Indonesia will have it worse than the global average. China, in particular, may have the greatest GDP loss in absolute terms, at US$20 trillion.

Losses could exceed 4 per cent GDP in the Middle East. Economies heavily reliant on fossil fuels to buoy the public purse and with little financial buffer to invest in clean energy sources stand to lose the most. Petrostate Iraq, which relies on oil to prop up 36 per cent of its GDP and 95 per cent of government revenue, could lose over 8 per cent of its wealth.

The figures were measured against a base scenario where the global temperature rises to 2.7 degrees Celsius, in the report titled “No pain, no gain: The economic consequences of accelerating the energy transition”. The Intergovernmental Panel on Climate Change has said that the worst effects of climate change could only be avoided by staying below 1.5 degrees Celsius of warming.

The consultancy forecasts a global GDP dip of around 2.5 per cent by 2035, before some of the losses are recouped by mid-century. Full recovery would only be reached around 2080, Peter Martin, WoodMac’s chief economist and report author, told Eco-Business. 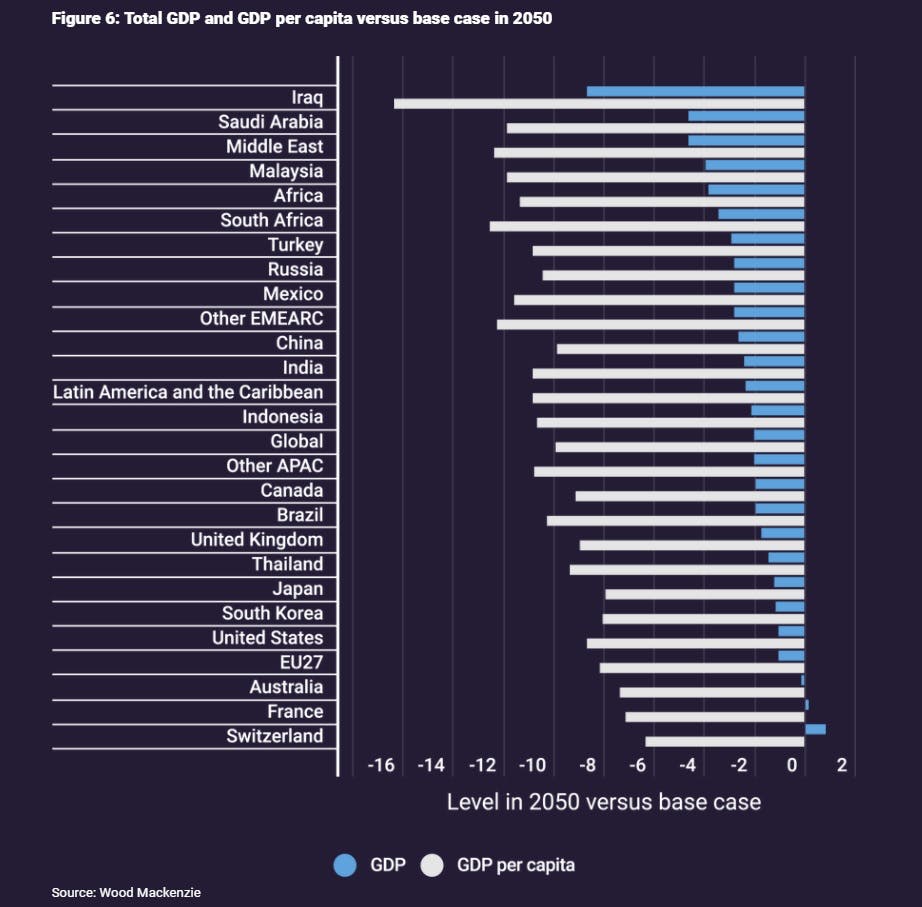 Iraq is set to be among the worst hit by efforts to limit global warming to 1.5 degrees Celsius, with projected GDP loss four times the global average. Figure: Wood Mackenzie.

Countries with lower emissions, higher renewable power capacity, better technology and more raw materials like lithium and cobalt, which are needed to make batteries and electric vehicles, could fare better in the years ahead.

Wealthy economies like France and Switzerland could achieve modest GDP gains by leveraging new market sectors and investments in technology, although their per-capita wealth may still go into the negative.

“Those that are better positioned are, typically, wealthier economies with deep capital markets and a high propensity to invest in new technologies or an existing presence in nascent transition sectors,” the report said.

The takeaway should be that this transition won’t be felt evenly across countries and regions, and we need to do more to address that.

Meanwhile, Northern European countries like Finland and Sweden may benefit from a warmer world.

Martin said the results don’t mean the world needs to backtrack on the energy transition.

“We need to acknowledge that we need to limit global warming for the health of the population and the planet,” he said, adding that a 2 per cent difference to the world economy in limiting climate change to 1.5 degrees Celsius is not a “massive deviation”.

“We shouldn’t be worried that the impacts of transition majorly disrupt growth,” Martin said. “I think the takeaway should be that this transition won’t be felt evenly across countries and regions, and we need to do more to address that.”

Asia generally ranks lower in climate resilience than the rest of the world. Figure: Wood Mackenzie.

Rising sea levels, droughts and forced migration due to climate change will also be costly, with less developed countries facing the brunt of the effects, the report said.

The world lost US$280 billion from natural disasters last year, a third up from 2020.

Countries like Bangladesh and the Philippines are highlighted as being the least climate resilient.

According to scientific group American Geophysical Union, over a million people in Bangladesh are likely to be forced from their homes due to rising sea levels by 2050. Over 400 people were killed when Typhoon Rai struck the Philippines in December, while financial losses from agriculture and infrastructure are estimated at around US$550 million.

“Limiting climate warming to a global average of 1.5 °C above pre-industrial levels is imperative if the environmental and humanitarian crises wrought by extreme temperature increases are to be avoided,” it added.