Are decentralised communities the way forward for sustainable cities?

More countries are realising the limits of a take-make-waste model and coming round to the concept of a circular economy. What could cities and buildings of the future look like?

To realise the vision of a circular economy that reuses raw materials and minimises emissions and waste, it may be necessary to challenge the oft-cited projection that two-thirds of the world’s people will live in cities by 2050.

Different yardsticks for measuring a city’s progress may also be needed, said experts at an event organised by Eco-Business on Wednesday to discuss ways to keep resources in perpetual use.

“Do we really want to be using gross domestic product and consumption and income levels as measures of the progress and success of a city? Is that really how we keep cities and communities sustainable?” questioned Jacqueline Lam, deputy regional director for Southeast Asia and Oceania at C40, a network of megacities committed to addressing climate change. 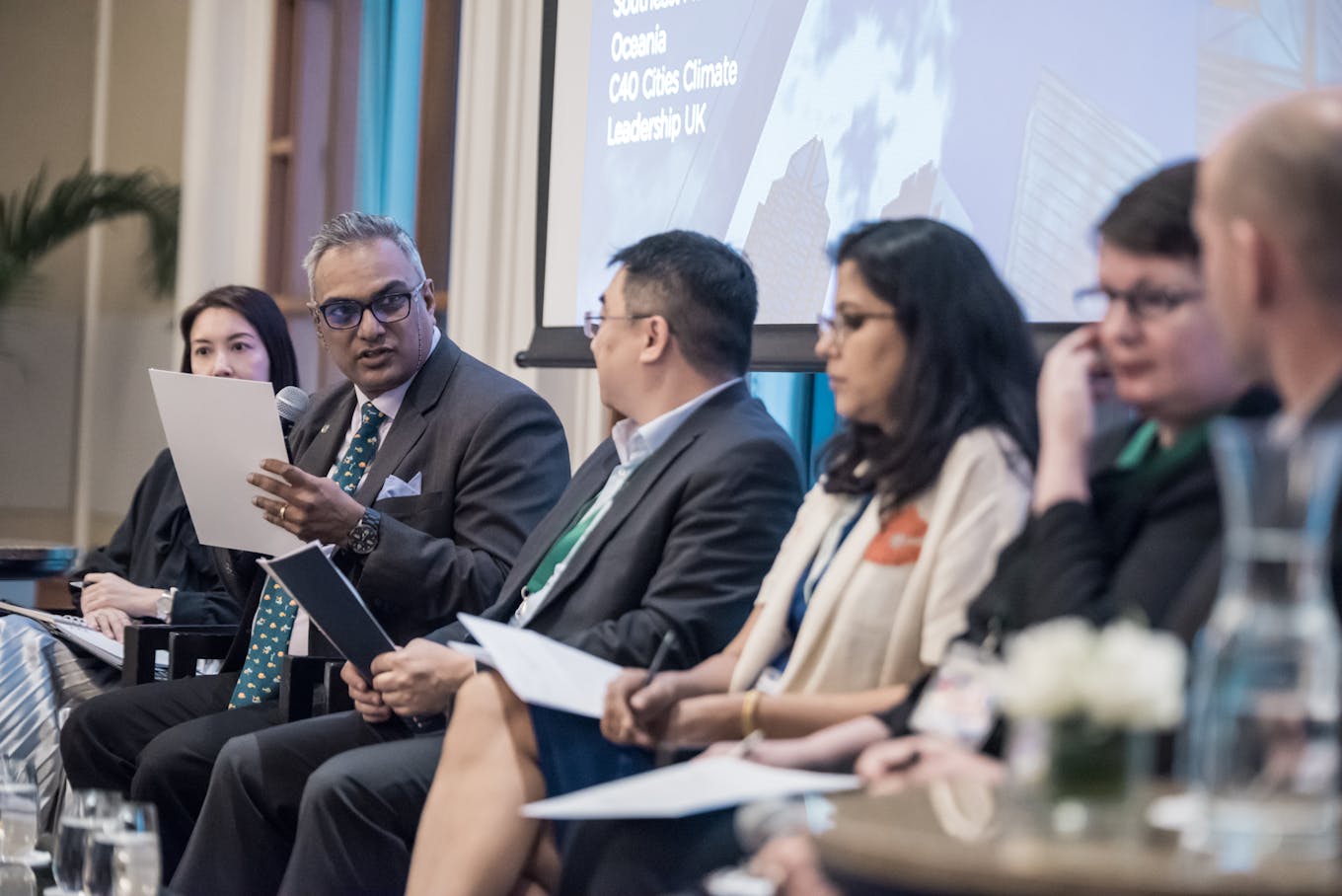 “I think we, for far too long, have accepted the fact that 70 per cent of the world’s population is going to be in cities by 2050, which is a bit ridiculous, considering cities occupy probably 3 per cent of the surface of the world. And that creates a lot of constraints and strain within the city,” he said.

“I hope the city of the future doesn’t look anything like what we have today, but is actually decentralised communities having their own self-sustaining food, energy and water resources, that are able to leverage technology to stay connected to the greater community at large,” Kuttan told an audience of about 100 senior executives and business decision makers.

The concept of a circular economy has been catching on in recent years, as more countries grapple with a growing waste problem and realise that the tall order of shifting away from the take-make-waste model and using as little new raw materials as possible has to start much earlier, at the planning and design stage.

Countries have also recognised the potential of the circular economy to boost global growth by US$4.5 trillion by 2030 and create high-value jobs.

Those that have come up with circular economy roadmaps include the Netherlands, Finland and Denmark. In Asia, Japan has a reputation for mapping the life cycle of materials—car buyers are required to pay a recycling fee—while in China, there is growing awareness of eco-design and a plan to make producers of certain goods responsible for them at the end of their useful lives.

Singapore has closed the loop when it comes to water—which it recycles and reuses—and land use planning, but is looking to do more when it comes to food, packaging and electronic waste, said Khoo. Industrial landlord JTC, together with consultants and other agencies, are also conducting a circular economy study on Jurong Island, the cornerstone of the country’s energy and chemicals industry.

One of the priorities identified in the Dutch manifesto is biomass and food, and Vonno said an industrial-scale solution in the Netherlands is a soup maker called Surplus Food Factory. Instead of channeling surplus food to animal feed and biofermentation, which the company felt to be a form of waste, it found a way to recover it for human consumption. 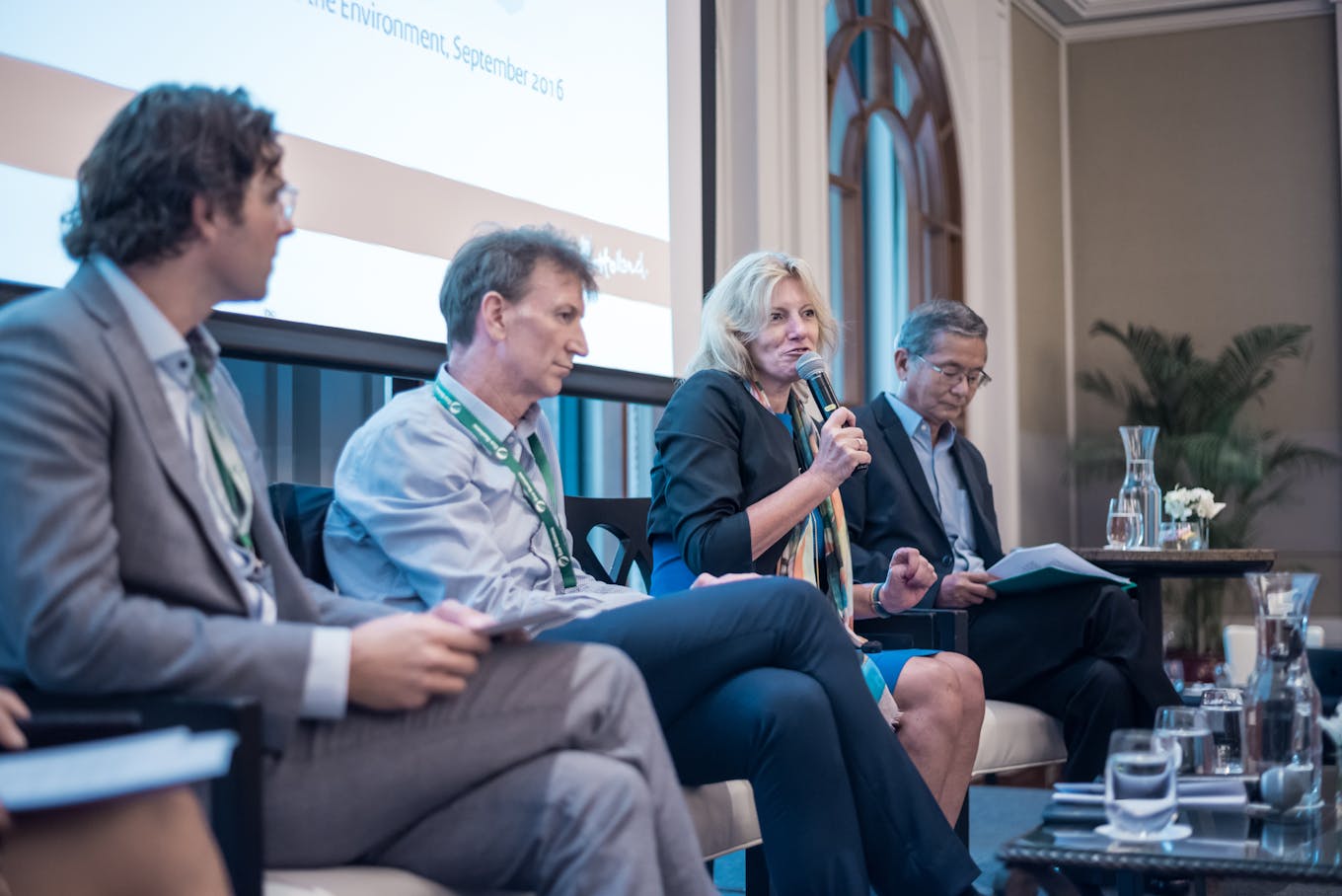 The Netherlands’ Ambassador to Singapore and Brunei Margriet Vonno and other panellists spoke about circular economy opportunities. Image: Eco-Business

Other panellists spoke about circularity and ways to incur a smaller environmental footprint in building and construction and other industries.

Developers should minimise the use of new materials and think about how they can be reused at the end-of-life, said Maarten Schäffner, sustainability manager at engineering and consultancy firm Witteveen+Bos.

They should use indicators such as environmental life cycle assessment calculations or the percentage of reused materials in a project, and optimise design at each step of the process by comparing it with a baseline, said Schäffner, whose company is involved in the Jurong Island circular economy study.

A tool called material passports is useful for the circular economy because it enables engineers and developers to know exactly what buildings or structures are made of, paving the way for reuse and recycling. “Because right now, we are taking our buildings down after 20, 30 or 50 years of use, but most of the time we don’t know what’s in them anymore,” said Schäffner.

Property and infrastructure group Lendlease has been using engineered timber to construct some buildings, and its projects include the Forte residential apartments in Melbourne, Australia, and two office towers in Sydney.

“Your building weight is roughly a quarter of what it is for a normal building and that means your foundations don’t need to be as deep or heavy,” he said. Parts of the building can also be prefabricated offsite before being put together at the construction site, which generates less traffic and noise.

Good design and working towards zero-waste or carbon-neutral goals at each step of the process are important. For instance, as the world pushes for greater adoption of renewable energy to curb carbon emissions from the burning of fossil fuels, project developers need to think about the design of such infrastructure, so that solar panels and energy storage systems can be redeployed or reused when they are decommissioned, said Kuttan.

“Developing sustainably is really a fundamental challenge for all cities today,” said Khoo. “How cities adapt to a slew of disruptions arising from climate change, resource constraints, social shifts and new technologies will be critical to their liveability and sustainability.”