A campaign for a new alternative protein billed as the solution to the meat industry's environmental and health crisis claims soy feminises men. The startup emerges as alt-protein brands make potentially misleading claims as they jostle for a piece of a market growing by 20 per cent a year.

The competition for a slice of the much-hyped alternative protein sector is fierce, as startups jostle for share in a market projected to be worth $28 billion by 2025.

But as the market for mock meat and dairy brands gets more crowded, concern has been raised about the environmental and health claims brands are making as they attempt to appeal to investors and consumers by disparaging competitors.

A new brand of alternative meat made from hemp and peas launched a marketing campaign in April in which it claimed that eating soy — a common ingredient in mock meat products — gives men gynecomastia, or “man boobs”, because soybeans contain plant oestrogen.

Though the myth that soy feminises men has persisted, a March study found no link between eating soy and testosterone or oestrogen levels in men.

The Naturist, the Estonian brand behind hemp-based mock meat brand Crump, did not respond to queries about the source of its claim, which was not backed up by evidence.

The soy industry associations of America (ASA) and India (SOPA) did not respond to requests for comment.

We are seeing a massive shift in investments and innovations around alternative proteins in Southeast Asia, and many of the new technologies are at risk of reproducing extractive modes of food production.

The Naturist launched Crump as a meatless meat that is a healthier, more sustainable alternative to soy in a press release titled “world’s first hemp meat brand could solve meat industry environmental and health crisis”.

Popular mock meat brands such as Impossible Foods, which has raised almost US$2 billion in funding in the last two years, are made mostly from soy protein.

Crump also said in a marketing email sent to journalists that eating soy can make consumers fat and processed soy can cause heart disease.

The startup also claimed in a launch campaign on crowdfunding platform IndieGoGo that soy is made from genetically modified (GMO) stock, sprayed with pesticides, and most (62 per cent) of the deforested areas of the Amazon rainforest have been replaced by soy fields.

While soy’s impact on ecosystems in Brazil has been well documented, Lieven Callewaert, president of the Round Table for Responsible Soy (RTRS), a standards body for responsible soy production, said that soy is a driver of deforestation in the Cerrado region of Brazil that surrounds the Amazon, rather than the Amazon itself.

He also noted that while most of the soy produced for animal feed is GMO, soy used for human food is not genetically modified.

Evidence that eating soy causes cardiovascular problems is patchy. Diet-health links are notoriously difficult to prove, however a 2017 study found no link between soy intake and heart disease.

The Crump campaign positioned hemp, Cannabis sativa, as an “underrated superfood” which can survive in low-moisture soil, grows quickly, does not require pesticides, and has powerful carbon-locking properties.

Jürgen Jürgenson, chief executive and co-founder of The Naturist, described lab-grown meats as “an abomination” in a promotion video for Crump. 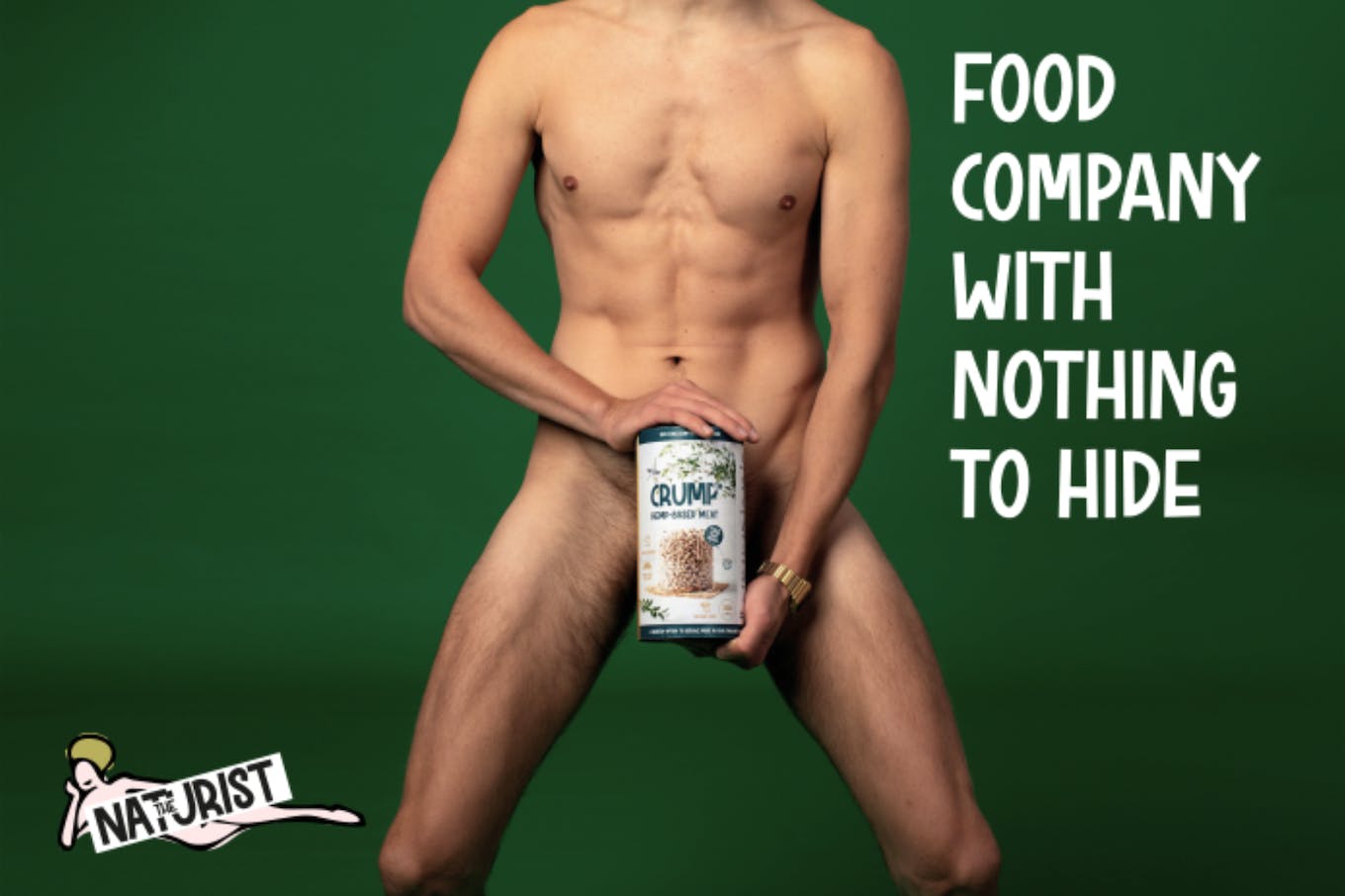 Crump is the world’s first vegan meat that contains more protein and less fat than meat, and has a high protein content that can replace meat in a vegan diet, the new brand from Estonian startup The Naturist says. Image: The Naturist

He referred to the report The Politics of Protein, which highlights the pervasiveness of misleading statements in the fast-growing alternative protein sector, which includes plant-based foods, lab-grown meats and fermentation products.

Published in April by the International Panel of Experts on Sustainable Food Systems, an initiative that campaigns for food system reform, the report asserts that the claims made by alternative proteins brands are often limited and speculative, and oversimplify the complex nature of food systems.

The Good Food Institute, which promotes alternative proteins, claims that “industrial animal agriculture may be the most environmentally damaging industry on Earth”, while Impossible Foods has asserted that eliminating meat from the human diet is “the world’s most urgent environmental problem”.

These claims do not account for regional differences in how livestock is reared, the report finds. While in the Global North meat is primarily sourced from factory farms, in the Global South animal production tends to be smaller scale and pastoralist, and supports the livelihoods of 1.7 billion smallholder farmers.

Questions about how and where food is produced are often lost in the search for “techno-fixes”, which position lab-grown meat and novel plant-based substitutes as the best solutions, the report finds. The noisy promotion of these solutions is crowding out traditional options, such as agro-ecological and indigenous food systems, which provide access to healthy and sustainable diets.

There is also a risk that the venture capital-led alternative protein sector repeats the same problems associated with industrial agriculture, such as intensive, ultra-processed forms of food production, and excludes people such as Global South smallholders and Global North farmer and food processing workers from the conservation about how to reshape food systems.

“We are seeing a massive shift in investments and innovations around alternative proteins in Southeast Asia, and many of the new technologies at risk of reproducing extractive modes of food production,” said Madhumitha Ardhanari, principal sustainability strategist for sustainability non-profit Forum for the Future, who is leading a project to create a just, regenerative protein system in Southeast Asia.

“For a transition to plant-based diets to be truly resilient in the long-term, it needs to be ecologically safe and socially just,” she told Eco-Business, noting while plant-based foods are largely better for animals, the planet and people, “they can still be irresponsibly cultivated — this holds true not only for soy but to any crop such as peas, lentils and hemp.”

The report also claims that there has been an over-focus on protein, driven by industry lobbying and venture capital interest in the sector, which is dominated by a few, large meat and dairy companies that have acquired or launched alt-protein brands. A lack of adequate protein intake is only one of many nutritional deficiencies affecting populations around the world, the report finds.

Another problem is that research to support claims made by alt-protein brands tends to be funded by the companies themselves, and the market is concentrated among a few firms; almost every large global meat or dairy company has acquired or launched a plant-based meat and dairy substitute brand.

Claims about the unsustainability of eating fish were made in the Netflix documentary Seaspiracy, and observers have pointed out that the documentary overlooked small-scale artisanal fisheries prevalent in many developing countries. Environmentalist George Monbiot said Seaspiracy’s message — to avoid eating fish — was targeted at “people with a Netflix subscription.”