Meat from plants—Does Asia have an appetite for Impossible Foods?

The Californian plant-based food technology company has just launched in Singapore with a mission to convert Asia's increasingly meat-loving population to meat that isn't meat. Do they have the right recipe for this region? Eco-Business asked company founder Pat Brown.

It was at the 2015 United Nations climate change conference in Paris that the scale of the task ahead of him really hit home to Pat Brown, founder and chief executive of Impossible Foods, the Californian food technology company that launched its plant-based meat range in Singapore last week.

The Paris conference, probably the most important climate event of the millenium, was attended by the world’s leading environmentalists, who are more aware than anyone of the massive impact of meat production on forests, water, biodiversity and climate change, recalls Brown. “But they went out and had steak for dinner,” he says.

“I realised [from the Paris talks] that you won’t accomplish anything by asking people to change their diets,” he said at the launch event on Wednesday at Potato Head Folk, one of 8 restaurants in Singapore where Impossible Foods fodder is now on the menu.

Brown’s mission is to completely remove animals from the human food chain by 2035, and the only way to do that is to create food that looks, feels and tastes exactly like meat, he believes. 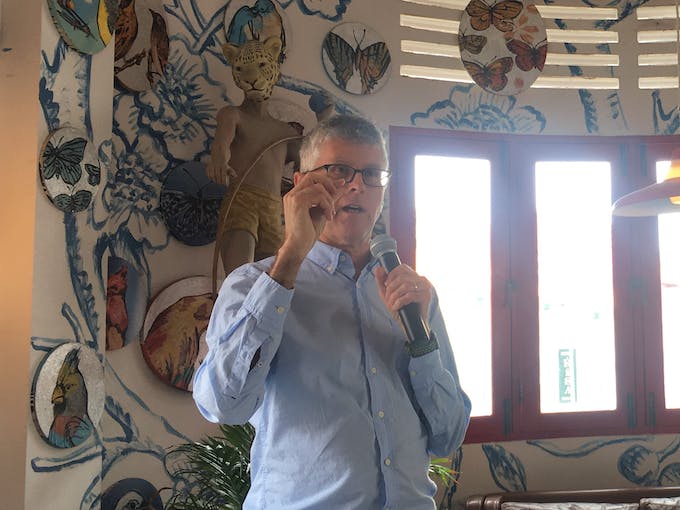 “We can only eliminate animals as a food production technology if we deliver more value to consumers [than animal products],” said the former Stanford biochemistry professor and pediatrician.

To do that, Impossible Foods has a team of 350 people, 109 of them scientists like Brown, working on solving what the company’s founder calls “the world’s most urgent environmental problem”.

The secret ingredient to meat tasting like meat is heme, an essential molecule found in every living plant and animal. It is most abundant in animals, but Impossible Foods makes heme from plants.

We’re producing meat for people who love meat to solve the world’s most urgent environmental problem.

On the back of investors that include Singapore government investment firm Temasek Holdings, Impossible Foods launched in Hong Kong and Macau, its first international markets, in 2018. The brand is now on the menu in 5,000 restaurants worldwide, up from 50 when it launched in 2011.

Most of them are in the United States. But as 40 per cent of the world’s meat is eaten in Asia, and Asia’s burgeoning middle classes are the world’s biggest new consumers of meat, this region is critical to Brown achieving his mission.

In this interview with Eco-Business, Brown talks about why more people are switching from meat to meatless, why replacing animals with plants to produce food is better for the planet, and taking on the might of the meat industry lobby.

How easy was it to get funding for Impossible Foods?

The whole reason we exist is because people love meat. We’re producing meat for people who love meat to solve the world’s most urgent environmental problem. This is a market that in 10 years will be worth US$3 trillion. One of the reasons why our investors are excited about investing in us is that so many people love meat, and we’re making meat—just meat free of animals.

What’s the key thing about your products that will make people switch from meat to meatless?

For a very large fraction of meat lovers, it’s as good as or better than the cow version. Our research and development focus is on creating a product that is better for meat lovers, and we have a capability that the cow doesn’t have: as soon as we have a product that is the best product you’ve ever tasted, the next day we’re working on making it even better.

Have you done a Pepsi Challenge with Impossible Burger, pitting it against a Big Mac and a Whopper?

Last month, two people from our company were on a live news show in the US. The hosts cooked a regular, high-quality beef burger and an Impossible Burger side by side. They gave them to the news anchors to taste blindly and decide which they liked better. They split 50-50. We did it again on a local news show a couple of weeks ago, and with the same result. Basically, they couldn’t tell the difference.

How is Impossible Foods taking on the might of the meat industry lobby in the US?

The meat industry is politically powerful in the US—and they don’t like us. They recruited lobbyists with the task of taking down Impossible Foods and their budget was unlimited. They are actively interested in keeping us from being successful. But we’re not fighting with them. We’re just introducing a product that we hope consumers will like and will choose as their meat instead of the cow version.

As soon as animal-based agriculture stops, something amazing would happen… You would be turning back the clock on climate change.

What’s your plan for taking on competitors, such as Beyond Meat, which is already established in Singapore?

It would be stupid for us to think of other [meat-free] companies as competitors. If we take a customer from them it does nothing for our mission—it’ll only take away from a tiny market. We need to grow the market together.

Why has Impossible Foods chosen Singapore as one of its first markets in Asia?

Singapore is an obvious place for us to go. It is a place where people are obsessed with food, and where every kind of Asian as well as European cuisine comes together. It is one of the couple of world centres of culinary innovation, so it gives us an opportunity to introduce our product to Asia in a way where we’ll be highlighted in the full spectrum of Asian cuisine. 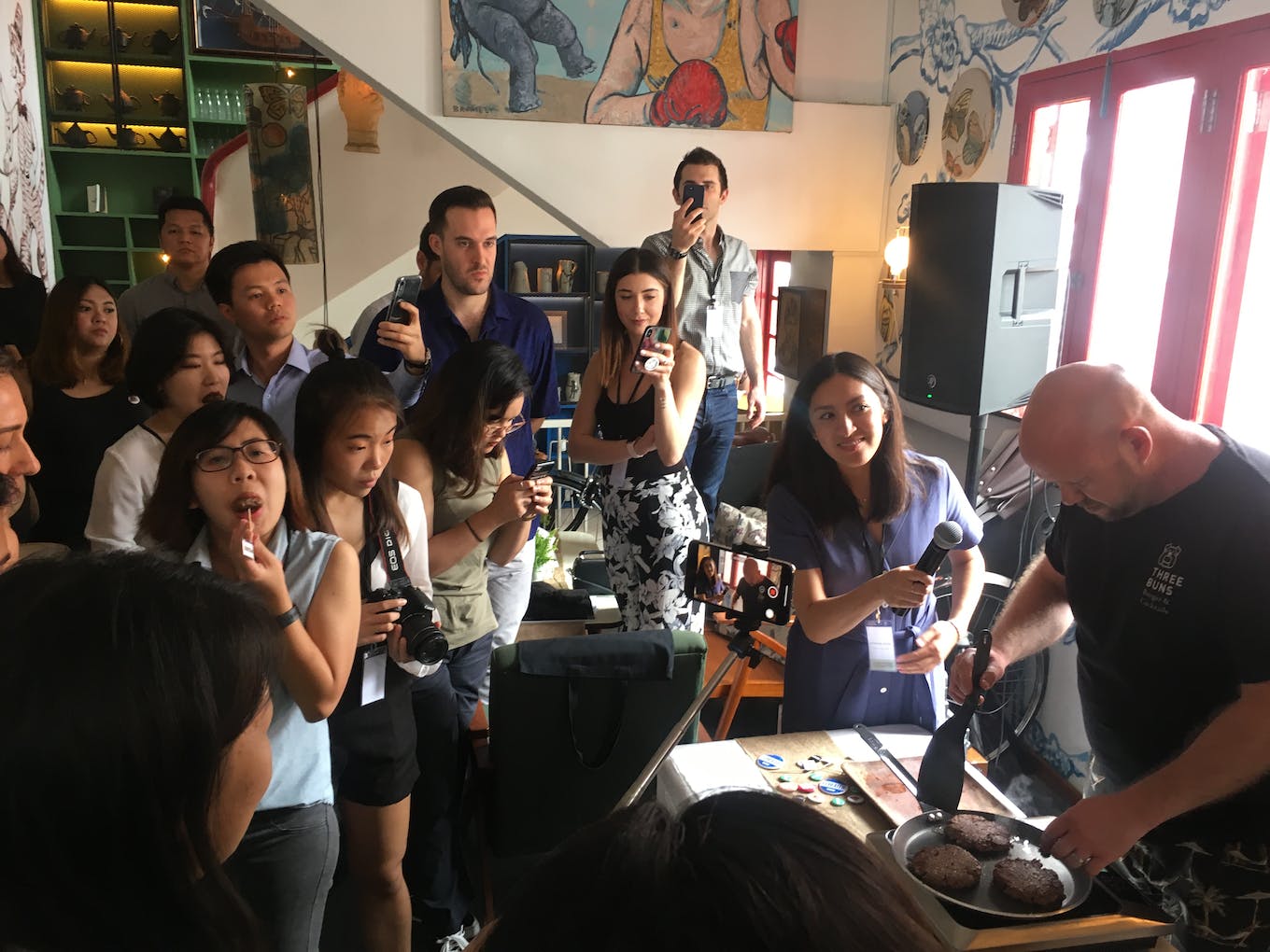 Your product isn’t cheap. At Potato Head Folk, and Impossible Dream is $27 (US$20) and The Impossible Chedda is $23. Is Impossible Foods out of reach for the less privileged?

Our product is priced in the range of premium ground beef. It’s affordable, but it’s not the lowest-priced product. Lower prices will come as we scale the business. In the US, we’re served in White Castle, the world’s oldest fast food franchise, that serves a predominantly poor population. There, [an Impossible Slider] sells for US$2, and they’re making money. We want to be accessible to everyone. The reason the price point is higher in Singapore is because we’re launching with world-famous chefs, not because the ingredients are expensive.

What about developing Asia where meat consumption is growing faster than anywhere—how can you make an impact there?

We’re eager to launch in poorer parts of the world not just because that’s where the middle classes and demand for meat are growing fastest, but because part of our mission is food security and global nutrition. Sub-Saharan Africa and Southern Asia have the highest rate of protein deficiency in diet and iron deficiency in the diet, two nutritional problems that our products solve, without environmental impact.

The latest version of the Impossible Burger has soy protein in it. How do you ensure that the supply chain of all of your products is sustainable and deforestation-free?

People associate soy with deforestation because people are cutting down forests and planting soy. But humans almost never eat soybeans. It’s pigs, chickens and cows that eat soybeans. The reason this is a problem is because soybeans are so inefficiently converted into meat by feeding them to animals that you need to grow huge amounts of soybeans to produce the amount of meat the world demands. We’re using soy directly in our product. If we replaced all the meat in the world with our product using soy, we would vastly reduce the amount of land devoted to soy cultivation.

Half of the entire land surface of Earth is being used to raise animals for food. As soon as animal-based agriculture stops, something amazing would happen—atmospheric carbon dioxide levels would drop because plant biomass that’s currently grazed on by cattle would recover. You would be turning back the clock on climate change.

Do you have any advice for young sustainability entrepreneurs?

First, think about a huge, global problem that you care about, and recognise that the government or the UN isn’t going to solve it. The critical thing is, don’t discourage yourself by thinking that the problem is too big.

If you care about a problem, and you don’t see it being solved, it’s your responsibility to solve it. And if you can find a market solution to this problem, you will not only be making contributions to the sustainability of the planet, you’re likely to build a very successful business.