4 trends that will shape sustainability in Asia by 2030

From rising consumerism to plastics consumption, a report by Forum for the Future highlights the key trends that could make or break sustainable growth in Asia in the run up to 2030.

As the world gets another year closer to the 2030 deadline, UK-based sustainability non-profit Forum for the Future has unveiled four trends that will affect Asia’s ability to curb global warming and create a sustainable economy.

Asia’s rising consumerism tops the list, followed by the anti-plastics movement, the decline in biodiversity, and the rapid growth of internet use in the region.

These four trends are related, with consumerism the main driver, said Ariel Muller, managing director for Asia Pacific at Forum for the Future.

“Rising consumerism is driving increased plastic waste, which then further threatens biodiversity in the region’s coral reefs. On the other hand, a shift in consumer behaviour towards minimalism could dramatically reduce plastic waste and therefore increase the opportunity for protecting regional biodiversity,” Muller told Eco-Business.

Here are four trends identified in the report, The Future of Sustainability 2019, as the clock counts down to 2030:

1. Consumerism is changing in Asia

By 2030, Asia could account for more than half of the world’s middle-class consumption, with India’s economy poised to overtake the United Kingdom’s this year, and China’s “Singles’ Day” becoming the biggest shopping day in history after the Alibaba-inspired festival surpassed sales of US rival Amazon by US$26 billion in November 2018.

Not far behind are other economies like Singapore, Japan, South Korea and Thailand which are fueled by a binge in consumer credit.

Despite this sobering trend, Muller said it is still an “exciting time in Asia” as there are signs of a deeper shift in mindsets around consumption in the region.

She cited how “conscious consumerism” has emerged especially among millennials in the region, who tend to have lower disposable incomes, and are more willing to buy ethically produced items.

Another sign of a changing Asian mindset is how consumption has shifted to peer-to-peer transactions in the wake of the sharing economy in the region. China’s sharing economy is expected to grow by 30 per cent annually for the next five years, as everything from bikes and scooters to umbrellas and phone-chargers is rented. In Singapore, the sharing economy has even introduced designer clothing loans through Style Theory, a fashion rental platform.

Besides these trends, the report noted how sustainability may be supported by the next generation of conscious leaders from family-owned businesses, which account for 85 per cent of businesses in Asia and represent some of the world’s largest companies.

The report said: “With an increasingly global outlook and a legacy to uphold, the opportunity for this generation to harness its wealth to drive sustainable development is ripe.”

The late Henry Sy Sr. (seated center), who was the Philippines’ richest man and founder of retail giant SM group, is flanked by his children. The second generation Sys have led the sustainability efforts for disaster resilience in the country. Image: SM

Asia is grappling with a growing throwaway culture.

However, the report cited efforts towards curbing plastic pollution in the region with a ban on plastic bags in some Indian states and single-use plastic to be banned in Malaysia by 2030.

In Beijing and Jakarta, people can pay for public transport by trading their plastic waste for credit through reverse vending machines. Hotels and resorts around Asia are starting to remove plastic straws from their consumer services.

Despite these efforts, Muller said the plastic ban only scratches the surface of the problem.

“While efforts to eliminate straws are a great start, we’re still going to need to build an entirely new approach to how we understand waste,” she said.

“If we can harness both technological innovation and people’s imagination and motivation, the region could incubate the new emerging business models that will support the world’s future waste management systems.”

The Asian region is home to 20 per cent of the planet’s animal and plant species and the world’s third-largest tropical forest. The reefs of the “coral triangle” in the Philippines, Indonesia and Malaysia, the temperate forests and the large river basins found in the region are among the most unique on earth.

However, biodiversity in the region is in fast decline with nearly 25 per cent of native species threatened and six of the world’s 25 biologically rich areas found in Southeast Asia already endangered.

Muller called for “urgent action” from government, business and civil society to sustain “the equilibrium” of biodiversity. 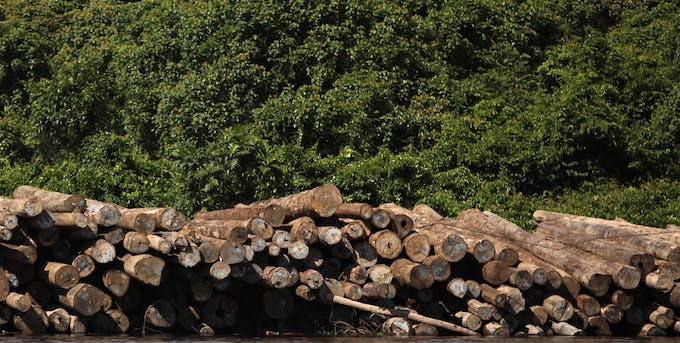 In 2015, Indonesia pledged to cut emissions by 29 per cent by 2030 as part of its national biodiversity targets in COP21. Most of the country’s emissions are from forest destruction and degradation of peatland. Image: DFAT

One conservation group has charted an ambitious yet achievable conservation plan to protect literally half the planet by 2050. The plan, linked to a policy initiative called the Global Deal for Nature (GDN), is being proposed as a companion pact to the Paris Agreement.

As the world nears the 2020 renegotiation of the Convention on Biological Diversity—a global framework that commits national governments to conserving biological diversity—this plan is not as radical as it seems, but is gaining traction as the scale of the crisis becomes clearer.

Half the world’s population will have access to the internet this year, with Southeast Asia leading the pack with more than 370 million existing internet users recorded in January 2018 and double-digit growth in most countries in the region.

Famed for being a major shopping destination, almost half of Hong Kong’s consumers have said they plan to do their purchases online in the next two years. With the average citizen spending more than 3.4 hours on the internet daily, the former British colony in southeastern China is a huge driver of how the Asian super power is expected to overtake the US as the world’s largest consumer of goods this year.

This trend is worrisome as the amount of energy and materials that power our internet use will exceed 14 per cent of global emissions by 2040, with Asia being at the forefront, said Muller.

But in the context of sustainability, Muller said hyperconnectivity enables people to create “greater transparency and opportunity to mobilise around the issues they care about”.

However, as our lives are increasingly lived online, there are unintended consequences, she added.

In 2017, the gaming industry raked in US$108 billion dollars worldwide, with nearly 40 per cent of these sales coming from east Asia, especially China and South Korea. England’s National Health Service is set to launch its first clinic for internet and gaming addictions following growing concern over the problem and the World Health Organisation (WHO) classifying it as a mental health condition.

Meanwhile in India, a spate of mob-related violence followed the spread of fake news relating to child-abduction through the WhatsApp message service.

Earlier this year WhatsApp added labels to indicate when a message has been forwarded, partly in response to  rumours disseminated through the messaging app. The company is now imposing limits on how many groups a single message can be sent to.

In the face of these social media ills, the inventor of the world wide web himself, Tim Berners-Lee, has launched a global campaign to protect people’s lives online from abuse and threats.

The English engineer urged leaders to create a regulated space, promising to protect users from hate and prejudice, fake news and data exploitation prevalent in the online world.

The Forum for the Future report highlighted calls by governments, communications regulators, academia, and commentators for Facebook and other social media giants to be regulated by the government as a public utility.

Given these events, it is expected that governments and regulators are likely to heavily scrutinise tech giants from 2019 onwards, said the report.

“In the face of the disruption to come, we can and must, step back and reconfigure our relationship with living online, for our own resilience and that of our communities, digging deep to assess what it really means to be connected and what it means to be human,” it read.