As Southeast Asia moves to power its people in more responsible ways, career opportunities are set to become greener and fairer. But are workers ready to fill the clean energy jobs springing up across the coal-reliant region?

Before his father entered the operating theatre for emergency heart surgery in 2008, Robin Pho promised he would join the family’s business, an Indonesian supplier of manpower for the oil and gas industry, which had been struggling to stay afloat in the wake of that year’s financial crisis.

When oil prices collapsed in 2014, many clients ceased drilling. With its mechanics, welders and electricians no longer needed, the small family business, unwilling to abandon its people, sought a new way forward, and decided the future lay in clean energy, shared Pho.

Right People Renewable Energy, a Singapore-based renewable energy firm that Pho now runs as chief executive officer, was born. Venturing into renewables was no easy task, he told Eco-Business, but with some capacity development, many of his employees formerly working in oil and gas now distribute, construct and maintain solar panels across Indonesia.

As Southeast Asia adopts more clean energy technologies, it is vital that its workforce is trained in the necessary skills, said Yongping Zhai, director of the Asian Development Bank’s energy division.

“The region is not fully ready for an overnight switch to renewables,” he said. “There are skilled workers in coal power plants, but for them to enter the clean energy sector, they need training and capacity building.”

As of 2016, renewables supported 611,000 jobs in the Association of Southeast Asian nations (Asean). Liquid biofuel production accounted for the majority, followed by large hydropower and solar photovoltaics, according to a 2018 assessment of Southeast Asia’s renewable energy market by the Abu-Dhabi-based International Renewable Energy Agency (IRENA).

IRENA expects the region’s clean energy industries to employ about 1.7 million people by 2030, based on energy plans and policies now in place. Should Asean members accelerate deployment in line with the region’s renewable energy potential, the sector could supply 2.2 million jobs.

With the bulk of manufacturing capacity having shifted to Asia, the world’s most populous region is home to the largest share—60 per cent—of the global clean energy workforce, according to a 2019 report by IRENA. China is the clear leader, accounting for 39 per cent of employment in renewables. The solar photovoltaic industry employed most of China’s 4.1 million clean energy workers last year, followed by solar water heating and wind. 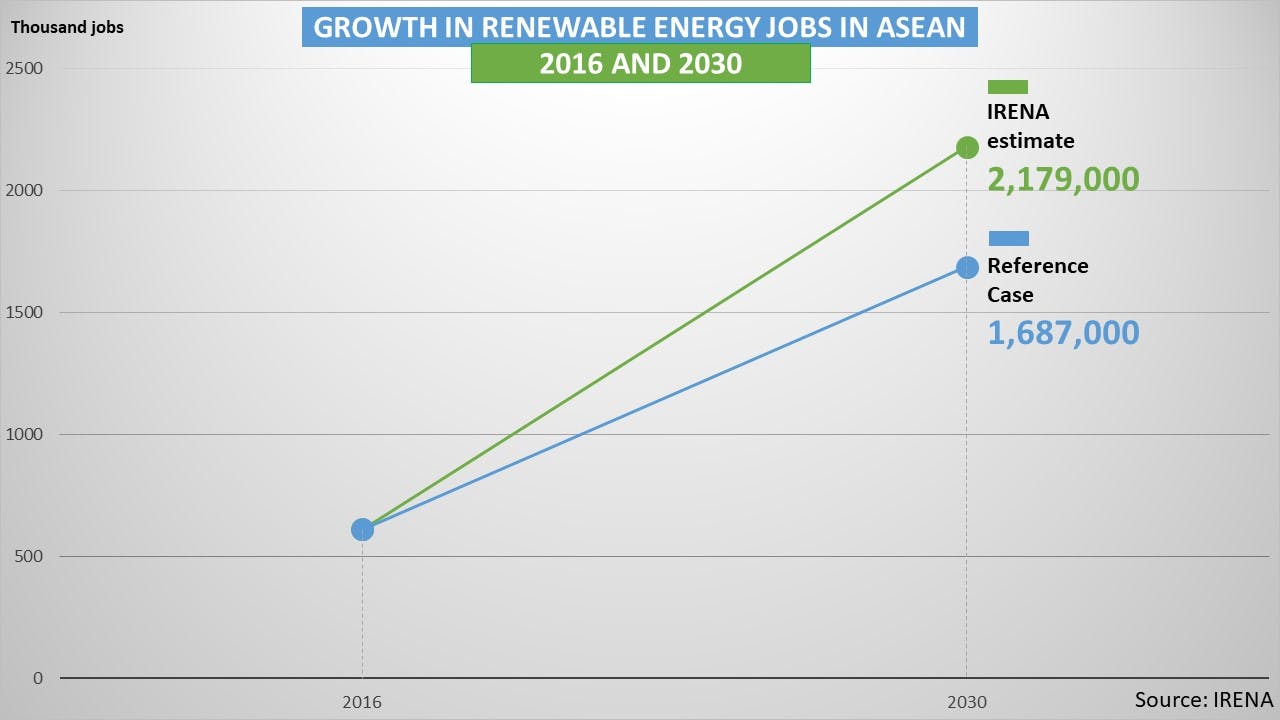 Eco-Business graphic: Growth in renewable energy jobs in Asean, 2016-2030. With current energy plans and policies, nearly 1.7 million people could be working in Southeast Asia’s clean energy sector by 2030. With scaled-up deployment, this number could rise to 2.2 million, according to IRENA. Source: IRENA. 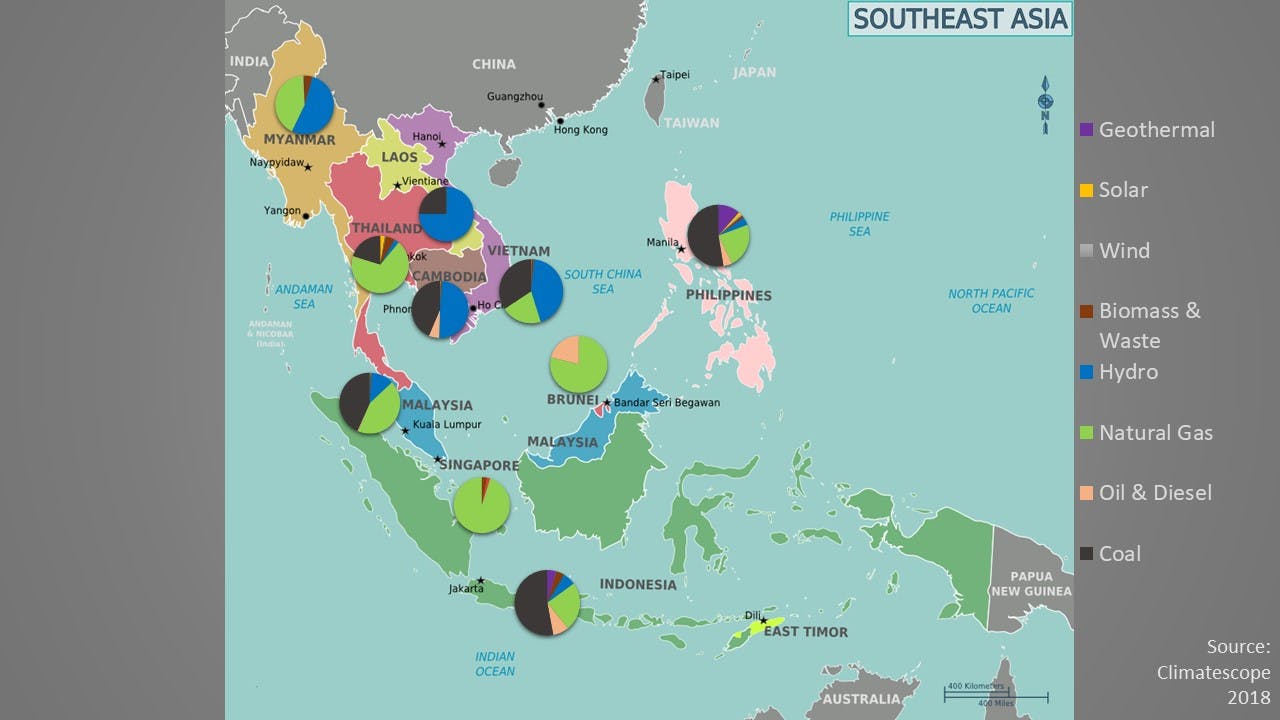 While coal will remain a key energy source in Asean over the coming years, its significance is likely to decline in the long run as costs for wind and solar power fall and Asean countries seek to combat air pollution and meet international climate goals.

It is estimated that by 2020 onshore wind and solar photovoltaics will be consistently less expensive sources of new electricity than the cheapest coal, oil or natural gas options, without financial assistance.

The Asean bloc has also set the target of generating 23 per cent of its electricity from renewables by 2025.

Although communities that depend on coal will not need to fear for their jobs in the next few years, opportunities in fossil fuels are set to decline eventually, while the clean energy labour market will keep growing, said Shiva Subramanian, founder at Singapore-headquartered clean energy firm Rice Renewables and managing director at solar engineering company Goggles Energy.

One way to prevent a shortage of the skills required for the shift towards clean energy is closer collaboration among the Asean states to enable professionals to tap into training opportunities beyond their national borders, said Robin Pho.

If Indonesia, for instance, is to divorce itself from coal as recently suggested by the country’s president, the archipelago will need to train an adequate workforce, for which it currently lacks the educational institutions, he noted.

In this case, Singapore—home to non-government business associations like the Sustainable Energy Association of Singapore (SEAS) and the Solar Energy Research Institute of Singapore (SERIS) at the National University of Singapore—could step in and function as a platform for capacity development, he said.

He added that joint ventures between more experienced foreign companies and local firms had also proven to be a suitable business model to share expertise, allowing local workers to expand their knowledge.

One of the benefits of working in renewables is being able to sleep well at night, knowing that you are doing something positive for the world. There is no point in having a fat bank account when you cannot breathe the air around you.

Moreover, professionals from other industries looking to gain a foothold in renewables should build on their existing skills, said Subramanian.

“There are plenty of training programmes designed for professionals who want to switch to clean energy. They facilitate the transition, especially for those looking to make use of the skills they already have,” he shared.

Offshore development expertise acquired in the oil and gas sector, for example, could be a great asset in the construction, assembly and deployment of platforms for the offshore wind industry, according to IRENA.

Hans van Mameren, a 50-year veteran of the shipping trade before launching Singapore-based renewable energy consultancy Energy Renewed in 2017, noted that switching Southeast Asia’s workforce from fossil fuel extraction and burning to renewables would require adequate education, training and labour policies, but enabling the transition was also a matter of mindset.

Asean’s clean energy transition coincides with a major change in mindset among Southeast Asia’s youth, said Robin Pho of Right People Renewable Energy. 68 million new workers will enter Asean’s labour force by 2025, many of them not only looking to earn a living, but also to effect positive change, he noted.

“The younger generations are even more passionate about climate change and renewable energy than we are. Many already look for jobs while studying, and they are more interested in jobs that make a difference than ones that pay well,” he said.

Increasing awareness is also shaping the region’s institutions, with green-minded students aiming to acquire knowledge that will enable them to have a positive impact, said Pho. Singapore Management University’s launch of Southeast Asia’s first sustainability major is just one example of how the region’s education landscape is adapting to this change. 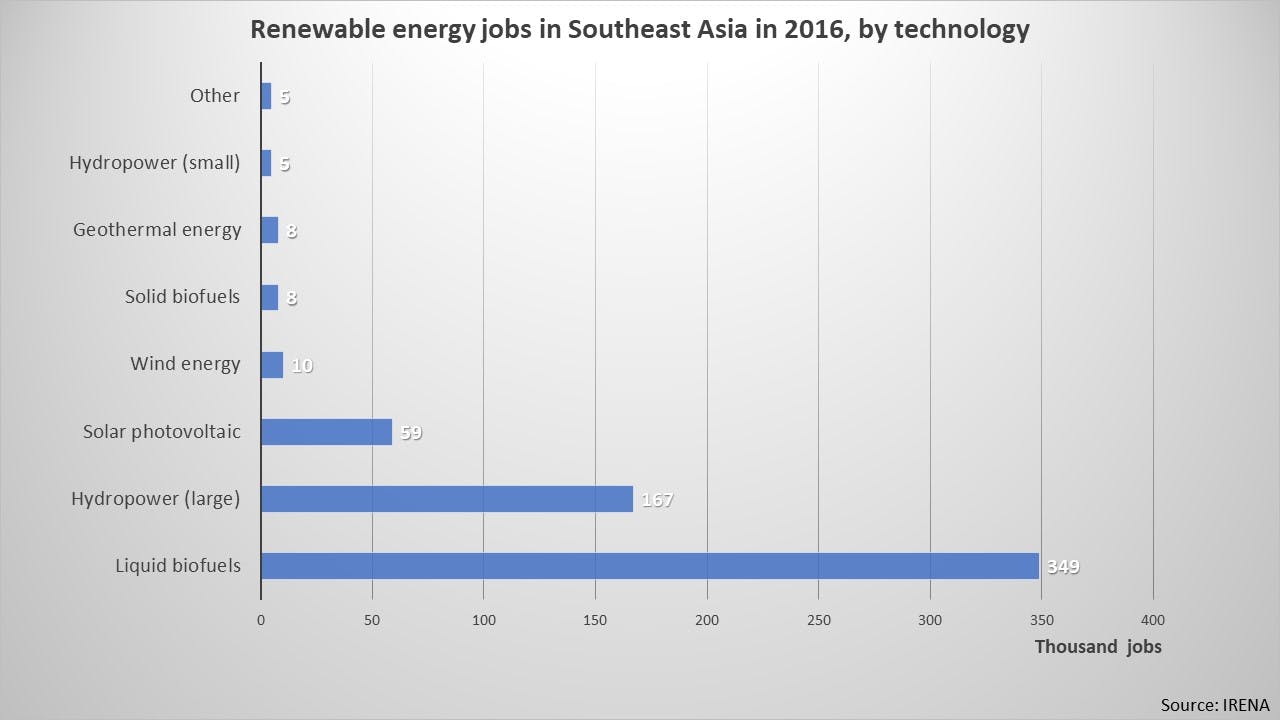 Jobs in clean energy are diverse across industries and companies, according to IRENA’s 2018 report. The skillsets and occupational patterns in the agricultural supply chain for bioenergy, for instance, differ greatly from those in the solar, wind, hydropower and geothermal industries.

Career outlooks in renewables look particularly rosy for workers boasting technical skills, especially in the solar industry. Employment in the sector could increase six-fold to 333,400 workers, of which 70 per cent will deliver technical, operations and construction services by 2030, reads IRENA’s analysis.

Driving such development is also the region’s growing manufacturing industry, with several Asean countries such as Malaysia, Thailand and Vietnam emerging as solar panel exporters, according to IRENA’s latest annual assessment of jobs in the industry.

Expertise that is in particularly high demand is electrical engineering with skills in clean energy solutions. The problem is that most engineers are currently specialised in technologies different from those used in the renewables sector, said Pho.

Electricity produced by solar photovoltaics, for instance, is stored in batteries that use direct current (DC) instead of alternating current (AC), and electrical workers with experience in such systems are often hard to find, he shared. 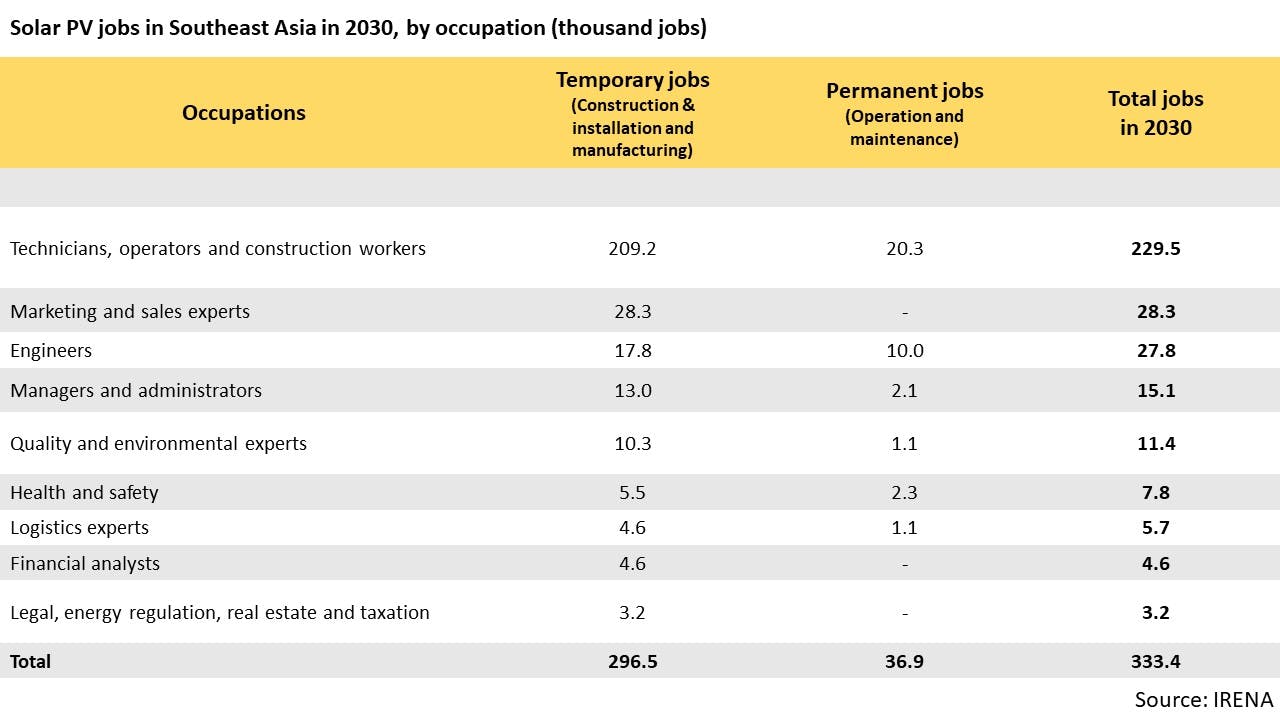 That said, renewables provide opportunities for workers with different talents and skills, offering diverse employment up and down the value chain, including an abundance of non-technical career opportunities for marketing and sales personnel, financial analysts and logistics experts, Pho told Eco-Business.

Clean energy jobs are also widely available to workers without university degrees. Yongping Zhai of the Asian Development Bank said: “The renewable energy sector offers plenty of jobs for people with different backgrounds and qualifications. And a lot of these, such as electricians, installers or repairers, do not require higher education.”

And in a region where the struggle for gender equality is far from being won, renewables could help bridge the gender gap. Women represent 32 per cent of the global clean energy workforce, which is significantly higher than the 22 per cent average in the oil and gas industry, a 2019 report by IRENA titled Renewable Energy: A Gender Perspective reads.

This is because renewable energy offers opportunities in a greater variety of disciplines, making the sector appeal to women in ways that the fossil fuel industry does not, the study shows.

Pho of Right People Renewable Energy said: “One of the benefits of working in renewables is being able to sleep well at night, knowing that you are doing something positive for the world. There is no point in having a fat bank account when you cannot breathe the air around you.”