Plans for coal expansion in South and Southeast Asia were finally re-evaluated, with little prospect for a revival this year.

Long seen as a critical emerging market for coal power, South and Southeast Asian countries radically reconsidered their commitment to it last year in the face of new economic realities following the spread of coronavirus.

According to a new analysis from Global Energy Monitor (GEM), four of the region’s largest emerging economies— Bangladesh, Indonesia, the Philippines and Vietnam—may have cancelled nearly 45 gigawatts (GW) of coal power in 2020, equivalent to the total installed capacity of Germany.

Prospects for a revival of coal development plans in 2021 have also been limited by announcements from major coal financiers in South Korea and Japan of new restrictions on coal power investments beyond their borders.

Analysts have for years warned that coal power expansion plans in several countries in South and Southeast Asia risked overcapacity in the sector, wasted capital and asset stranding—not to mention greenhouse gas emissions and environmental costs. The year 2020 may prove to be when the regions’ coal power expansion plans were finally re-evaluated in the face of the pressing need for climate action and the reality of declining low-carbon technology costs.

Falling one by one

Perhaps the most dramatic development in Asia’s energy sector last year was the summer flurry of coal power plant cancellations and postponements. It started in Bangladesh in June when Nasrul Hamid, Minister for Power, Energy and Mineral Resources, unexpectedly announced that the government was planning to “review” all but three of the country’s under-development coal plants, capping coal power capacity at 5GW. Suddenly, planned coal plants totalling 23GW were in doubt. By November, Bangladeshi media were reporting that the plan to scrap most of the country’s planned coal was awaiting approval from the prime minister.

A month later, details of Vietnam’s draft Power Development Plan, which is due to come into force next year, became public. The draft plan proposed cancelling seven coal plants and postponing six others until the 2030s, by which point it is highly unlikely they will go ahead. The 13 plants represent almost half of Vietnam’s planned coal power development.

Then, in November, the Philippines’ Department of Energy proposed a moratorium on new coal power plants which, according to analysis by GEM, could lead to 9.6GW of cancellations. And, in December, on the fifth anniversary of the Paris Agreement, Pakistan’s Imran Khan announced that the country would not construct any new coal power plants, though the real-world impact of this grandiose announcement has been questioned.

Adding in proposed project cancellations in Indonesia, GEM estimates that the coal power pipeline in South and Southeast Asia’s four major emerging economies may have dropped by as much as 62GW in 2020. That leaves just 25GW under development, an 80 per cent decline from just five years ago. Exact figures for cancelled and remaining plants will depend on how last year’s flurry of announcements is manifested in specific policies. 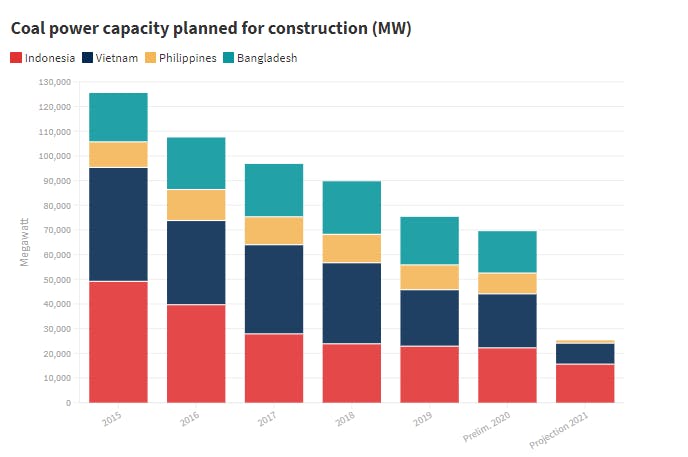 One contributing factor to the wave of coal power cancellations and moratoriums around South and Southeast Asia last year was the decline in finance. Banks faced growing public pressure to identify and manage the climate and biodiversity risks associated with coal power development and respond to the climate crisis by committing resources to renewables. A recent report from Greenpeace Japan estimates that Southeast Asia’s renewable energy market could be worth up to US$205 billion over the next 10 years.

The Japanese government also committed “in principle” to limit investments in overseas coal power plants, declaring that such investments would be contingent on the use of ultra-supercritical technology and the host country having a decarbonisation strategy. There have also been strong moves within the Korean parliament this year to ban Korean financing of coal power overseas, with progressive MPs from the ruling Democratic Party proposing related bills on four occasions.

The wave of announcements comes on the back of Singapore’s three major banks announcing an end to coal power financing in 2019. This leaves Chinese banks increasingly the “lender of last resort” to coal power projects around Asia. According to the Global Coal Public Finance Tracker, Chinese banks have provided finance to a total of 53GW worth of under construction or currently operating coal power, far more than the 21GW propped up by the second biggest financier in overseas coal, Japanese banks.

Source: Global coal public finance tracker • Note: The data covers all projects under development since 2013, including currently proposed projects, which have received or are likely to receive public finance.

All eyes on China’s policymakers

But movement may be on the horizon in China too. At the beginning of December, a report released by the BRI International Green Development Coalition and supported by the Ministry of Ecology and Environment detailed how the Chinese government could establish a “classification mechanism” of overseas project types based on their impacts on local pollution, climate change and biodiversity. The mechanism labels coal power and coal mining as “red”, meaning that involvement of Chinese actors in such projects would be off-limits. Eyes are now on policymakers to adopt the report’s suggestions.

The growing number of national pledges to reach carbon net-zero has arguably given impetus toward “greening” the Belt and Road Initiative. Though China’s new 2060 net-zero goal is targeted at the domestic economy, numerous voices are calling for the expansion of the development target to overseas investments.

While these dizzying developments in Asian energy are certainly welcome news, “king coal” is still clinging on in several places. Countries such as Vietnam and Indonesia, despite their large-scale cancellations, are still pursuing the construction of significant quantities of coal power, while Cambodia has announced new coal power projects, backed by Chinese finance and construction. Meanwhile, despite its welcome net-zero announcement, China is still building new coal-fired power plants at an alarming rate at home.

Asia’s journey away from coal will be a long one but in 2020 many countries at least picked up the pace.